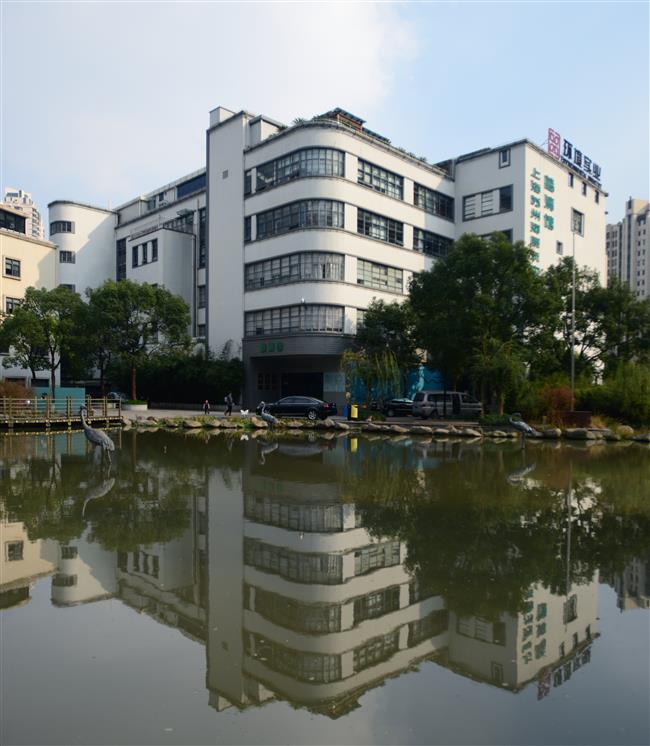 Union Brewery is one of only two industrial buildings designed by Laszlo Hudec in Shanghai and its preservation marks a milestone in the city’s architectural history.

The brewery was initially established on Jiangning Road by Norwegian businessmen in 1913 and registered as Union Brewery in Hong Kong in 1931, a time when even locals were keen to try new things from the West. Thus, beer became more popular for a time than tea when dining out. Union Brewery’s owners purchased land in the northwest corner of the then international settlement.

“During his trip to Europe in 1931, after having treatment on his heart in Bad Neuheim, Laszlo Hudec spent a long period of time in Munich, where he used the opportunity to study breweries in detail,” Italian architectural historian Luca Poncellini writes in his book “Laszlo Hudec.”

“After he returned the Union Brewery design was ready very soon: a composition of geomet-rical cubic blocks ...”

The general layout of the plant area is designed in the shape of a horseshoe. Covering a building area of 28,800 square meters, the plan contains a brew house, bottling section, warehouse, an office building and an electric power generation room. The brewery’s machinery was imported. Completed in 1934 and opened in 1936, the brewery once produced 5 million bottles of beer annually, making it China’s biggest beer producer at the time.

The fermentation tanks and beer barrels had an average weight of 25 tons per square meter. It was difficult to build the base for it due to the loose soil along the Suzhou Creek. Hudec used more than 2,000 timber piles to strengthen the base, which was as deep as 33 meters.

The brewery was essentially a steel-and-concrete structure and shaped in cubic blocks. Each building was different.

The bottling section, brew house and office building are the only three surviving buildings today.

Each floor of the 9-story brew house tapers to the top and it was similar in height to Sassoon House, the tallest building in Shanghai before the Park Hotel. 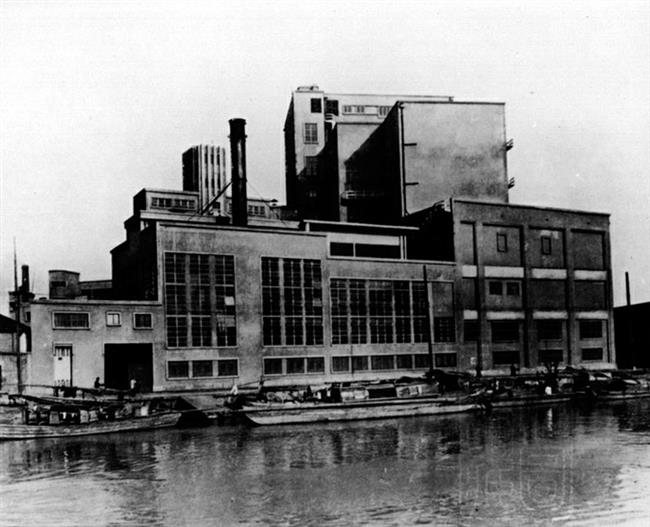 An archive photo of the brew house, viewed from the Suzhou Creek

Though listed as a Shanghai Historical Building in 1999, the brewery was nearly demolished in 2002 when the municipal government planned a big botanical greenland named Mengqing Garden, or Garden of a Clean Dream.

“It was a historical moment when small fish began to reappear in the formerly dirty and stinky Suzhou Creek, which had been cleaned up through a big-scale municipal project. The government decided to build a botanical green area and demolish the ‘ugly’ brewery and erect a new building to exhibit the achievement of the cleanup project,” recalls Wang Lin, director of the Historic Conservation Department of Shanghai Urban Planning Bureau and Land Resource Administration Bureau.

It was also a historical moment when people paid more attention to architectural heritage. New conservation regulations were soon made to include historical areas and not just single buildings. This led to the preservation of “background buildings” in these areas.

Wang and her colleagues intervened in the middle of demolition and invited Tongji University Professor Huang Yiru to design a plan to protect the surviving buildings of the 70-year-old buildings from being razed.

“The buildings which had been used by state-owned Shanghai Brewery for decades were in a poor condition,” recalls Huang, now deputy dean of the College of Architectural and Urban Planning at Tongji University.

“The 9-story brew house had only five stories left and its structure had been severely damaged. The original steel gates and windows had been sold by Shanghai Brewery workers as waste steel and Hudec’s original blueprints were casually scattered around on the floor,” Huang says.

His team brought back some blueprints, but when the professor sent more hands to retrieve the rest the second day, all had been sold as waste paper overnight. He did manage to find a 1942 booklet of the Union Brewery, in which the old photos were a major reference point for his renovation plan.

“We worked day and night on the design as we were concerned the brewery would be destroyed at any minute,” Huang says.

“The gigantic body of the brew house did shelter the view of the greenery from a nearby bridge. And the department in charge of Suzhou Creek had commissioned a Japanese architect to design a plan that included a greenhouse shaped like a huge fish and exhibition halls in traditional Chinese style to match the park area. It was very hard for them to understand the meaning of keeping this ugly factory in the planned garden,” he says. 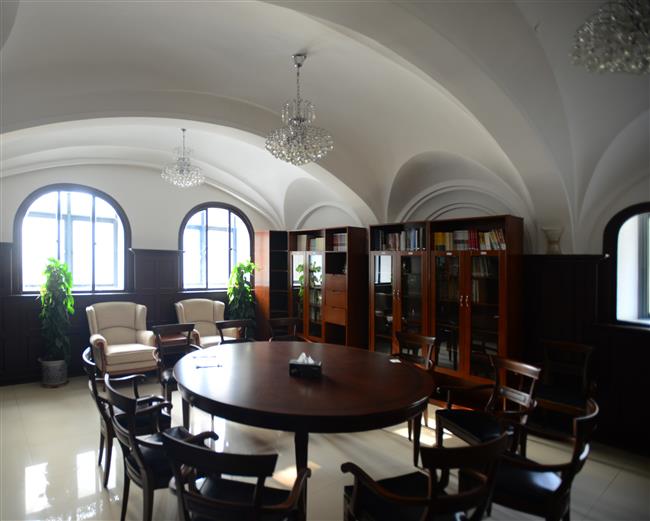 The interior of the former office block of the Union Brewery retains the original curved ceiling and steel windows.

Professor Huang’s plan included using the brewery’s bottling section for an exhibition hall to display how Suzhou Creek was cleaned up, a bar in the brew house and the office block retaining its original function.

After five rounds of expert evaluation meetings and five reports were submitted to city officials, Huang’s plan was approved.

Wang says the bottling section was especially conducive for hosting exhibitions since Hudec used a “beamless technique” that results in big, open spaces.

According to Mengqing Garden General Manager Yu Xiaolin, more than 800,000 people now visit every year, mostly young children and students. The bar has given way to a restaurant specializing in wedding banquets while the office block is leased by the Changxing Island management committee.

“It’s important to record and conserve the city’s architectural heritage but it’s also crucial to add new functions to these historical buildings. I’m satisfied with the final result of the brewery,” Wang says.

“The conservation and renovation of a historical building involves firm conservation policy from the government, technological support from experts and architects, as well as understanding and respect from the owners or tenants. It was a complicated project, but the final result proves it was worth the effort.”

Today the former brew house looks a bit odd as one wall is made entirely of tinted glass, making it appear as a curtain. Huang says his original design called for transparent glass where part of the building had already been destroyed.

“I designed the glass curtain as a ‘patch’ to showcase the building’s ‘wound,’ but it has, unfortunately, been changed to tinted glass by the tenant,” Huang says, chuckling.

“Without memories, a city has no depth. Historical buildings made of steel and concrete are solid. But they are also fragile and can be torn down for redevelopment projects and become nothing more than dust,” Huang says. “The conservation and restoration of the brewery mirrors the transition of our city’s attitude and awareness toward its own architectural heritage.” 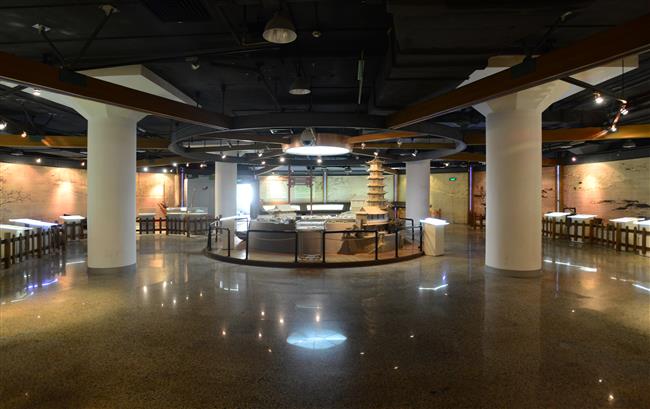 Tips: Mengqing Garden is open daily from 6am to 8pm. The Suzhou Creek Exhibition Center (a former brewery) is open from 9:30am to 3:30pm on Saturday and Sunday. Admission is free.