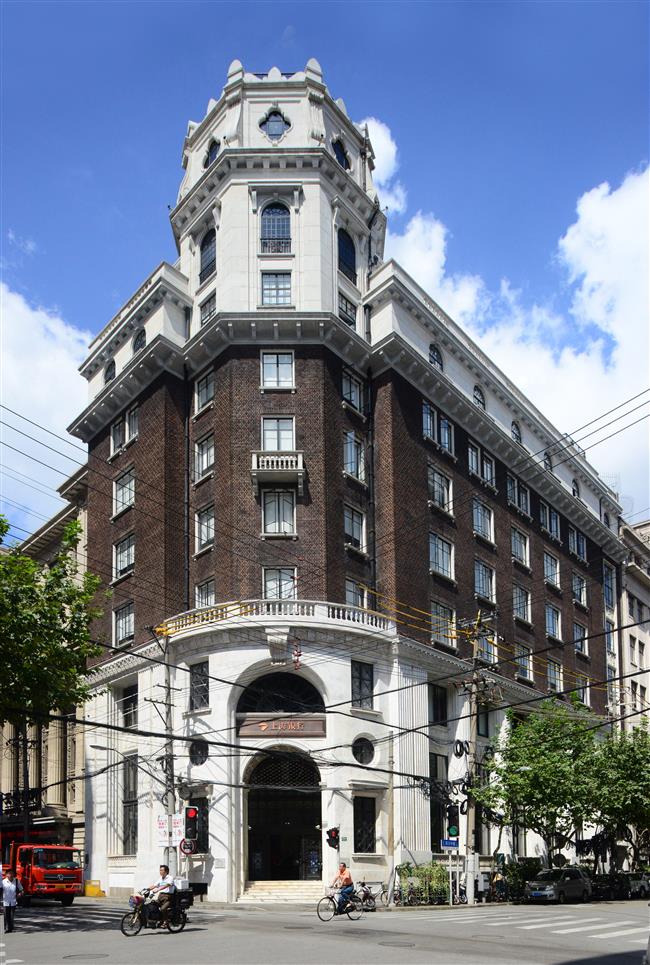 A recent photo of the Union Building after renovation. The elevation is composed of a white marble archway at the bottom, deep brown Taishan tapestry bricks in the middle and graywhite Shanghai plaster for the top. 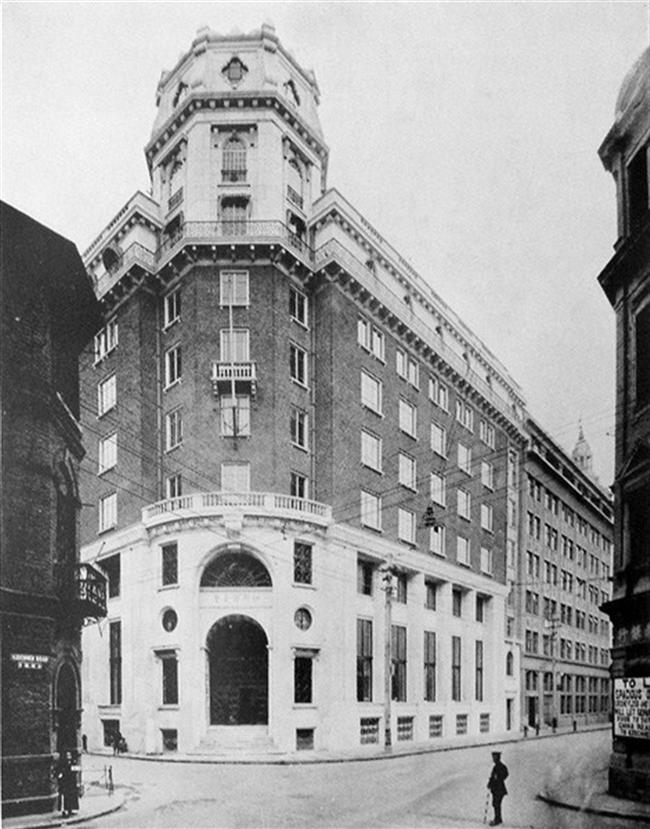 An archive photo of the Union Building for the Joint Savings Society, owner of the Park Hotel.

The Union Building on Sichuan Road was Laszlo Hudec’s first big project for a Chinese client. Only eight years later the architect and the client came together again to build the landmark Park Hotel, one of the top buildings in the Far East at the time.

The Union Building, which recently opened as a Bank of Shanghai branch after being restored, was initially erected for the Joint Savings Society, a cooperative venture formed in 1923 between the four big northern Chinese banks — Kincheng, Yien Yieh, Continental and the China and South Sea Bank.

The society soon became an influential financial institution and announced an open competition for the design of its new Shanghai headquarters.

Hudec won the competition and designed a building in an eclectic British Georgian style that converges on the curve of Sichuan and Hankou roads.

“It represented a radical refusal of the classical scheme — columns, capitals — usually adopted for bank buildings, both in Shanghai and in the rest of the world,” wrote Italian architectural historian Luca Poncellini, who authored the book “Laszlo Hudec.”

“It was, on the contrary, a very sophisticated exercise of eclectic design, in which Hudec balanced different sources of inspiration, including some typical architectural motifs of his motherland. A prominent tower placed on the corner is a characteristic element of late 19th-century Central European public buildings, as well as diamond-shaped windows. Corner cupolas can be found on a number of outstanding historic designs in Budapest,” Poncellini added.

Critics at the time wrote highly of the Union Building when it threw open its doors. English newspaper Far Eastern Review said it was “one of the most unique buildings in the business section of the town.” The China Press English paper called it “another bright gem added to Shanghai’s architectural crown,” adding the architect “put every fiber of his being into making it embody all the best that he has accumulated during the many years he has practiced his profession.”

In an interview with The China Press, Hudec admitted the shallowness of the site bothered him greatly.

“This precluded a real treatment in three dimensions so that the reality of a massive structure might result, and he was forced to depend on the effect produced by one side and the corner entrance,” the newspaper wrote.

His solution was intelligent. The elevation of the building was divided into three sections vertically, a shining white marble archway at the bottom, deep brown Taishan tapestry bricks covering the third to sixth floors and gray-white Shanghai plaster for the top.

The colors pleasingly contrast one another, creating a volume that makes up for the shallowness of the site. The octagon tower, which soared to the top of the building, also created a simple, yet powerful effect.

The main entrance, an immense marble archway closed by a heavy bronze chain curtain, is remarkable in many ways.

The design caused Hudec some sleepless nights, “Nights in which he would wake

to grasp pencil and sketch block, strive to fix the evanescent idea, only to find next morning that while he had ‘made progress,’ yet the thing for which he had been groping day and night was not there,” according to The China Press.

At that time Shanghai architects were considerably hampered by the municipal requirement that all corners be round or approximately so. But Hudec told the newspaper “the only rotund thing in nature is the paunch of an old man and heaven forbid that it should be taken as a model for architectural details.” 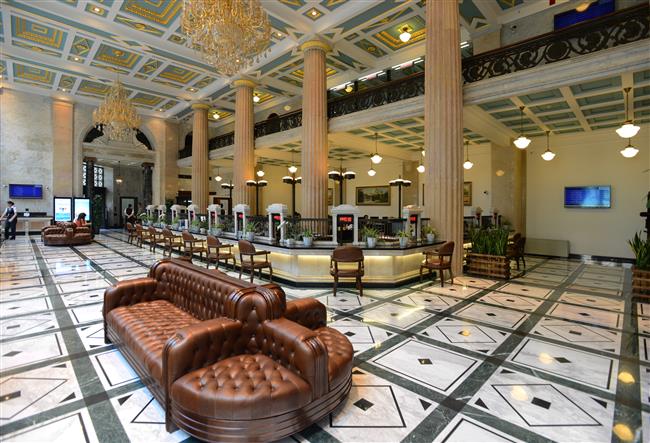 The interior was also well designed with great detail. The main banking hall on the ground floor was treated with marble wall facings, marble counters and columns, and even marble waiting benches in delicate tones.

French windows between the columns allowed ample light into the banking hall. Inside and out, the building was graced by delicate ornamentations of acanthus leaf. The counters are of the buff “cervallatio” topped with black marble slabs six inches thick.

The banking hall was “a room of colors — many colors, but all blended so harmoniously that the general effect is soothing to the eye.

It is not at all garish although green and buff, blue and bronze and gold, together with black and white splashes here and there, are used in Mr Hudec’s color scheme,” the newspaper wrote.

Hudec also spoke of his dislike for gray buildings. “None of my buildings, the American Club, Country Hospital or the I.S.S. Building (Wukang Mansion), is predominantly gray as are so many other Shanghai structures. I must have color and judging from the absence of adverse criticism, I must conclude that I know how to use it.”

And in the banking hall, he strove to get an effect of richness without having any special feature dominate.

“The arrangement of the green and buff columns was not a matter of chance but evolved itself as it were through many, many sketches drawn only to be discarded until I reached the scheme I have put to use,” Hudec said.

The Bank of Shanghai launched a renovation project of the building in 2012. During the restoration, Hudec’s design impressed chief architect Lin Yun from Shanghai Zhang Ming Architectural Design Firm.

“The interior decorations were so abundant, but every bit of ornamentation was properly used, no chaos at all,” Lin says.

“He uses acanthus patterns on the facade, on copper curtain doors and on the railing of the staircase, almost everywhere,” the architect adds. “Moreover he also adapts patterns of scrolls and fish scales extensively on chairs, doors and copper capitals (which are distinct, usually broader sections at the head of a pillar or column). The copper capitals atop marble are also rarely seen in buildings of his time.”

The China Press admired the building “as an artistic unity that has so combined the marble and brick, bronze and steel to bring out the beauty and utility of each of them to the highest degree.”

Back in the 1920s, the building featured a banking hall on the ground floor and the Joint Savings Society’s office on the second. The third to seventh floors were leased out as offices. The top floor housed club rooms for the society’s employees. It consisted of a large lounge facing the roof terrace and pergola, and various dining rooms.

The joint treasury was located in the semi-basement, which was attached to special money cashing rooms and a vault equipped with elevators. The bank had four main vaults.

“All four vaults are well preserved and sealed by thick copper gates and contain stainless steel safe-deposit boxes in all sizes. The vaults will be used by the Bank of Shanghai,” Lin says.

According to Huangpu District Archives, the Union Building was used by a state-owned chemical company after 1949, part of which was later rented by China Guangfa Bank. The building had been empty for years before the new owner, Bank of Shanghai, launched its restoration in 2012.

When Hudec won the competition in 1926, the 33-year-old architect was still in the early stage of his career, but he showed he wasn’t afraid to be innovative.

“The architect may borrow from a hundred sources, but the result is his very own when he has fused all these component parts into one harmonious whole whose greatest characteristic, in this case, is its freshness and departure from all stinted and stereotyped old forms,” the China Press wrote.

For a hard-working, intelligent man like Hudec, it’s easy to see from this creation that he would go on to design the city’s tallest building within a decade. Those sleepless nights were worthwhile after all. 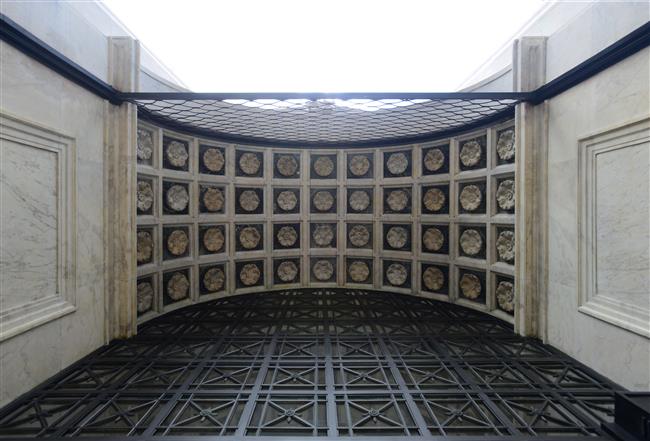 The remarkable entrance is an immense marble archway closed by a heavy bronze chain curtain.

Tips: The building is open during the bank’s office hours. You can look at the original decor on the ground floor, including the marble counters and marble benches. Don’t forget to check out the fa?ade and ponder Hudec’s solution for the round corner.