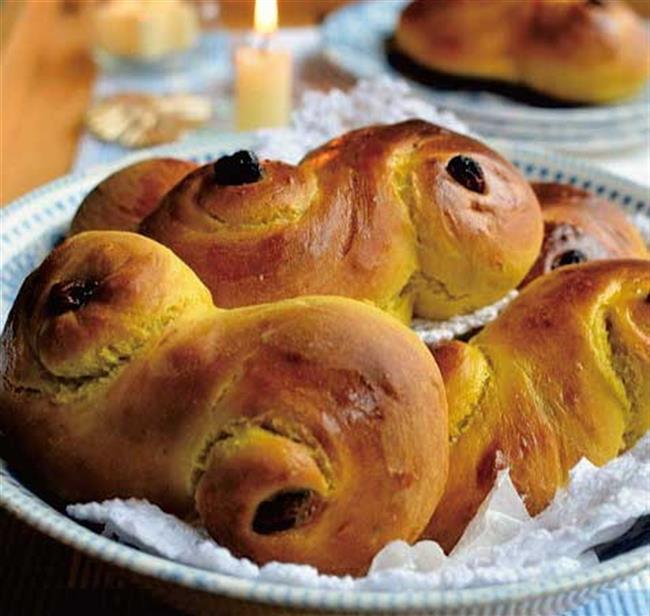 THE Nordic countries of Sweden, Denmark, Finland, and Norway have their own special Christmas traditions which depart from those practiced elsewhere in Europe.

Many Finns, for example, celebrate Christmas with a trip to the sauna and a dinner featuring baked ham, rutabaga casserole, rice pudding and stuffed pastries. This isn’t the only regional point of departure though. Let’s check out how others in Northern Europe ring in the holidays!

The Christmas season actually begins with Saint Lucia’s Day on December 13 in most of Northern Europe. This is particularly true of Norway and Sweden, where it is one of the most important observances of the year.

Saint Lucia’s Day is a special time for children, who take a leading role in the day’s festivities. Traditionally, the eldest daughter in a family dons a wreath on her head, as well as a white robe tied at the waist with a red ribbon. The festival pays tribute to the historic Saint Lucia, who was martyred for her Christian beliefs in the fourth century. The girls hold lit candles and serves their families St. Lucia buns, a saffron-flavored festive bread studded with raisins.

In some regions, the celebration is a neighborhood event where children dress in white costumes and gather together, holding lit candles and singing traditional songs. In the past, one girl would wear a wreath decked with lit candles, but this custom has been abandoned for safety concerns.

Warm mulled wine can be easily found in Norway, Denmark and Sweden during the Christmas season though its name may vary — it’s known as gl?gi in Finland and gl?gg in Sweden, Denmark and Norway. The name is actually derived from the German word “gluwein,” but the Northern Europeans have also developed many of their own local customs around this warming winter beverage.

In Sweden, gl?gg is an integral part of big celebrations. It’s believed gl?gg has existed since the 17th century. In Finland, people serve it with gingerbread cookies. The Danes prefer to add dry spices in their gl?gg.

People love to experiment with different fruits, liquors and spices to create their own gl?gg. Of course, premixed gl?gg is available on the shelf to save time. Citrus fruits such as oranges are the most popular add-ons; however, fruits like blueberries can be added to gl?gg too.

Rich creamy rice pudding is a traditional dessert for Christmas in the Nordic countries. In Denmark, risalamande, the Danish version of rice pudding, may be the most traditional dessert for Christmas. It is normally served cold with hot cherry sauce. In most traditional recipes, chopped almonds will be added to the festive dessert, with one whole almond mixed in. Eaten in groups, the person who gets the whole almond will be rewarded a small prize. Thus, if the almond lies in the bottom of the bowl, everyone will keep eating until they find it. The same custom can be found in Norway too, where the desert is known as riskream.

Most Norwegians eat rice pudding after Christmas dinner as well. In many cases, riskream is made with leftover rice pudding from “Little Christmas Eve” (December 23) with whipped cream, sugar, vanilla and a fruit sauce topping. Keep in mind, Norwegian riskream usually doesn’t include cinnamon.

However, Swedish rice pudding is apparently the opposite. Ground cinnamon is sprinkled on top with sugar. In any case, the desert is always comforting and delicious. In Sweden and Finland, the tradition of finding the whole almond has a slightly different meaning. The person who eats it will be lucky in the following year. 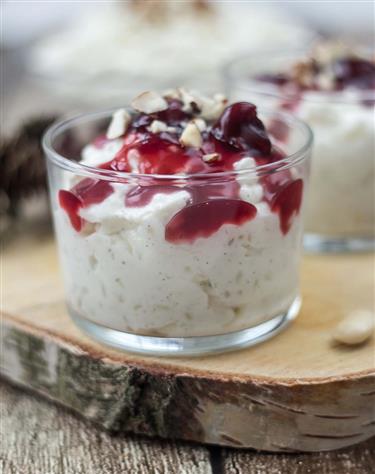 For the rice pudding:

1. In a saucepan, combine the rice and water, bring to a boil, then reduce heat and simmer until the water is gone.

2. Add the milk, bring it back to a boil, then reduce heat again and let it simmer until the rice has again absorbed almost all the liquid after about 30 minutes, stirring often.

3. Remove from heat, stir in the salt and sugar and allow to cool completely.

4. Meanwhile, chop the almonds coarsely and whip the cream until it thickens.

5. Halve the 2 vanilla beans and scrape the seeds into the cooled rice.

6. Add about 1/3 of the whipped cream and gently stir it in.

7. Add the remaining whipped cream and the almonds and gently stir to combine.

8. Pour this mixture into a serving dish, cover it and refrigerate until serving.

For the cherry sauce:

1. Put cherries, sugar, vanilla pod and water in a medium saucepan, bring to a boil, then reduce heat and simmer for 15 minutes.

2. In a small bowl, mix the corn starch with water, until liquid, then add it slowly into the cherry sauce — stirring constantly until the sauce thickens as it slowly comes to a boil.

3. Serve the rice pudding cold, re-warm the cherry sauce if necessary, and serve on top. 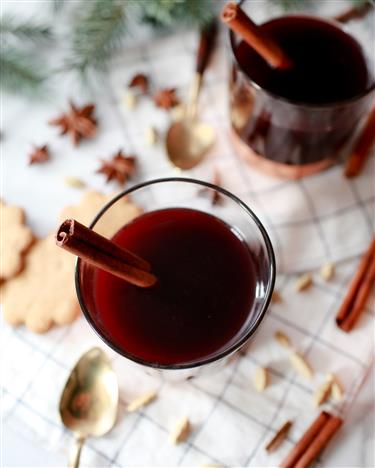 750ml red wine, such as Burgundy

1. Combine first 9 ingredients in a pot over medium flame.

2. Bring mixture to a simmer, being careful not to boil.

3. Reduce heat to low; cover and simmer for 15 minutes.

4. Remove from heat, and stir in sugar.

6. Strain mixture, and serve immediately, or gently reheat before serving. (If you prefer a stronger flavor, steep spices longer before straining.)

Note: To make a non-alcoholic version for your kids, use water or orange juice, and substitute 3 cups grape juice for the wine. Remember to omit sugar and then follow the above steps.