Jiangnan revisited: an emperor's memory of Hangzhou in art and literature

Emperor Qianlong (1711-1799) may be among the most popular characters depicted in Chinese television dramas. But few are aware of his real achievements and his personal taste on literature and art.

An exhibition, recently opened in the West Lake Gallery of Zhejiang Provincial Museum, may well fit in to enrich your knowledge about the second longest reigning emperor in China’s history.

The exhibition is a collaborative project by the Palace Museum and Zhejiang Provincial Museum with 168 exhibits on loan from Beijing.

"It is not the first time that we work with a local museum, but the level and importance this time is not common," said Ma Shengnan, researcher at department of palace life and imperial ritual at the Palace Museum.

Comprised of six parts, 202 pieces of lacquer, porcelain, engraved jade, garment, painting and calligraphy fill in the three-story space at the museum. The place is revamped in red and yellow, which immediately recalls images of the Forbidden City. The wall at the end of a staircase is even covered with lattice panels.

“It is not a coincidence that we put the show beside Gushan Hill. Actually the emperor used to reside here when he made his visit to Jiangnan (south of the lower reaches of Yangtze River),” said Chen Hao, director of Zhejiang Provincial Museum.

Like his grandfather, Emperor Kangxi, Qianlong was fond of visiting Jiangnan. He visited Hangzhou six times, and his temporary imperial palace covers an area of present-day Zhongshan Park, Zhejiang Library and part of Zhejiang Provincial Museum.

In his own words, the inspection journey to the south is one of the most important feat in his lifetime, the other being the warfare in the West. Hangzhou lies at the end of his route to Jiangnan. 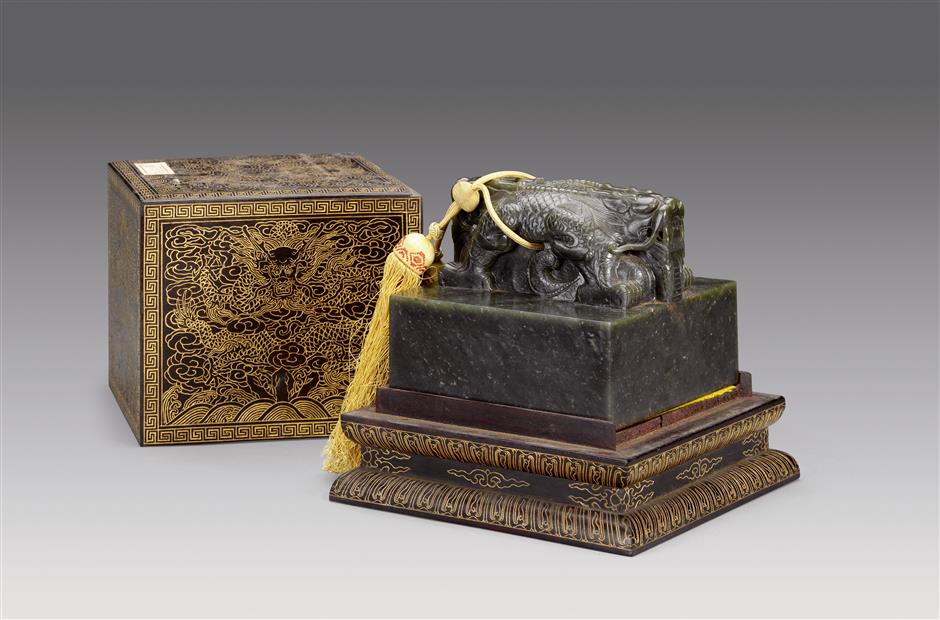 In the last part of the exhibition, you can easily identify Qianlong's love for the West Lake scenery.

He wrote about it, painted about it, engraved it in jade panels. The tablets commemorating his visits scattered around the lake provides more evidence. In a painting exhibited, he drew flowers he saw in Longjing on a tomb-sweeping day. The piece is dedicated to his mother. He wrote in the inscribed poem, how lovely the weather was with blossoms all over the garden.

With tools at hand, he could not resist the attempt to sketch from nature.

"We choose this item maybe not because of its artistic value. But we could see what Qianlong was like in daily life, not as an emperor but as a human being, " Ma told the audience in a guided tour.

Another part that could be easily overlooked is Qianlong's contribution to the Jiangnan area. Unlike popular imagination, he traveled to the south not for his own pleasure. One of his legacies left to Zhejiang is the seawall that he urged local officials to consolidate. He visited Haining four times to inspect construction site.

He also reviewed the Eight Banners' forces when he was in Hangzhou. As an important city strategically, Hangzhou is one of the three earliest cities to receive troops of Eight Banners (administrative/military divisions under the Qing Dyansty). Relevant pieces of Qianlong's writing recording the event and a full set of Eight Banners armor suits can be seen at the third part of the exhibition.

A greater part of the exhibition is made to showcase the emperor himself, his craze for self-portrait, his interests in Buddhism and his vast collection of antiques.

The Shanghai Daily lists some of the pieces which you should not miss.

Qianlong has painted West Lake for many times. This piece was done in Chengde Mountain Resort when he was 73 years old, as seen from the imperial seal "Yanyu Tower", which is located in the resort.

An ultimate fan of the West Lake scenery, Qianlong actually copied some of the landscapes and rebuilt them in his palaces in the north, including Chengde Mountain Resort, Jingming Palace, Summer Palace and Old Summer Palace. This piece, however, is not depicting the replica but his memory of the scenes in Hangzhou.

Item 2: manuscript "Ode to the Eight Views of West Lake"

The emperor himself has made many verses about the city, one of which is exhibited here. Written in red brush, the poem depicts the eight views inside his imperial palace beside the lake. Some of the palace's historical remains can still be seen in Zhongshan Park.

Item 3: painting of Emperor Qianlong in a bamboo forest with plum blossoms

Although not the first to do so, Qianlong is keen on a self-portrait with him dressed in casual suits and in different settings.

In this painting, by the imperial artist Giuseppe Castiglione, he stands in the front with casual clothes of a Han literati, holding a branch of plum blossom which suggests the coming of spring. The sapphire background is rare in such court paintings, displaying Castiglione's – better known as Lang Shining in Chinese – masterfulness in combining western painting techniques and subject of Chinese culture. 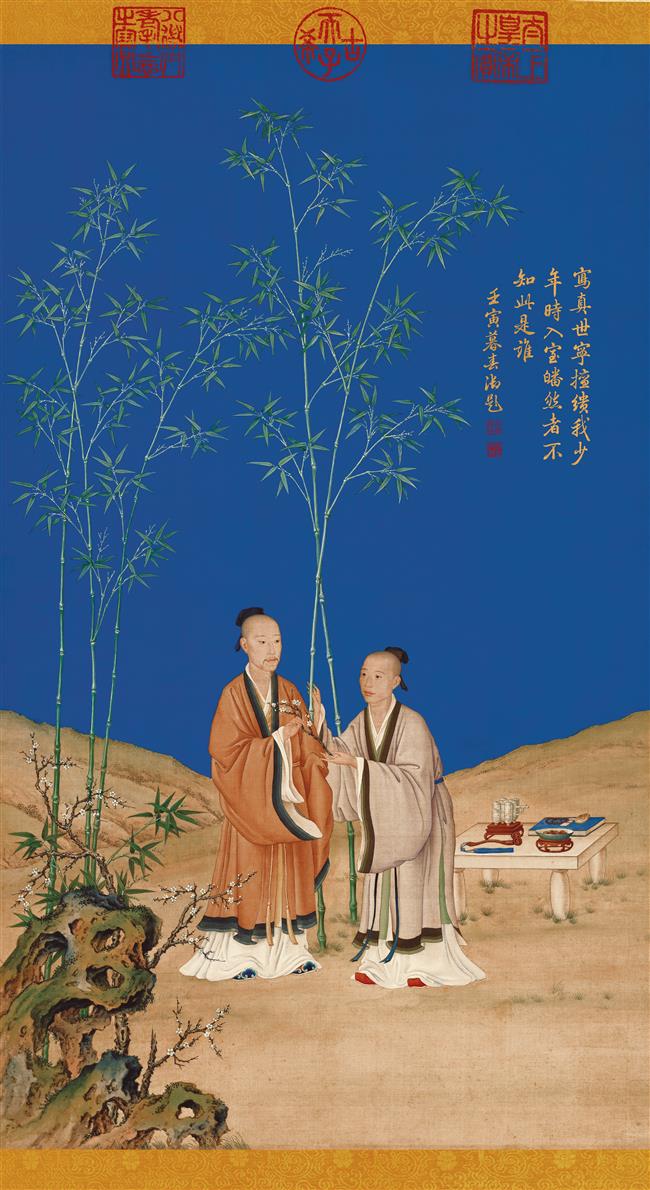 Painting of Emperor Qianlong in a bamboo forest with plum blossoms

"Hall of three rarities" (San Xi Tang) is Qianlong's study room. Three rarities (san xi) refers to saying that gentry expects to be wise, the wise expects to be the sage, the sage expects to know learnings from Heaven. The room is restored in actual size as the one in the Forbidden City, which looks smaller than what one has anticipated. The emperor’s stationeries are displayed, including a brush made of sandal wood, an ink stone, an engraved jade brush pot, a jade brush-holder in the shape of hills.

As an emperor who has lived for 88 years, Qianlong has achievements hard for his descendants to transcend. One being his 10 war successes. An imperial seal was made to celebrate his achievements, where he calls himself "Shi Quan Lao Ren" (the old man with a perfect military record), commemorating the 10 wars in his lifetime.