French artist Sandrine Binoux is premiering her first “artist-in-residence” exhibition at the Liangzhu Center of Arts.

“Amplitude” is the title of Binoux’s latest pinhole photography project, which exhibits until October 19, in Hangzhou. The exhibition includes 17 blown-up photos she took last summer on the outskirts of the most populous city of Zhejiang Province in east China

“The smothering heat in summer, here, was almost unbearable. So I went out every afternoon after 3pm,” Binoux told Shanghai Daily at the opening of the project. “But the intensity of light and time are two things pivotal for pinhole photography.”

Pinhole photography uses a simple camera without a lens, but with a tiny aperture, a pinhole, effectively a light-proof box with a small hole in one side. Light from a scene passes through the aperture and projects an inverted image on the opposite side of the box, which is known as the camera obscura effect. A single exposure can take more than six minutes, which will be translated into long hours of work in the wild.

For Binoux, her interest lies, not in an instant moment, but the process of recording time and the change itself.

The French artist has spent time in post-war Bosnia and Herzegovina, where she took up residence among the aftermath of the conflict to concentrate on the subject of ruins. 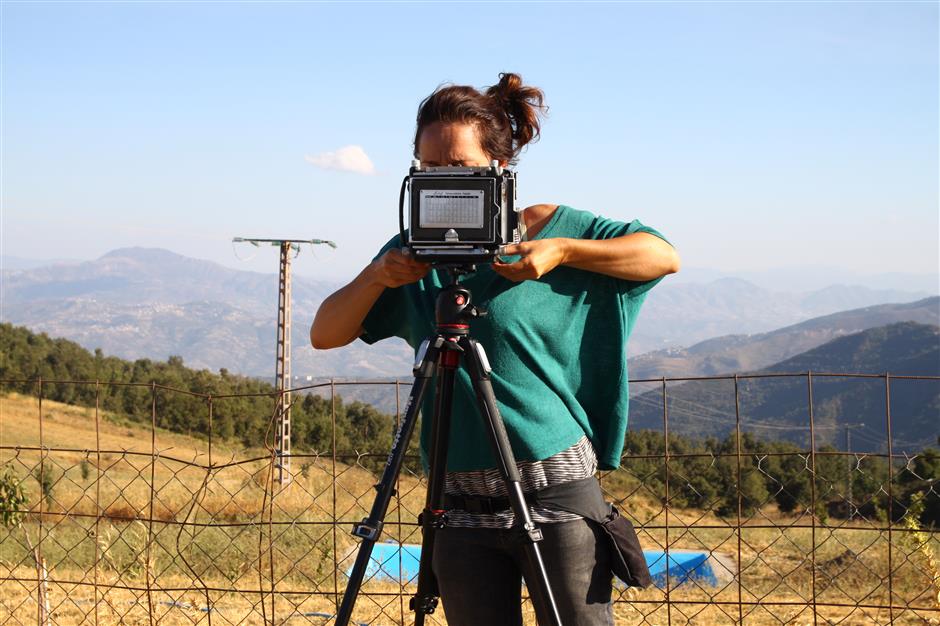 Before coming to China, she knew very little about the country except for its ever-changing scenery. And after taking up residence in Zhuangtang, the photographer, armed with her digital camera, tripod and camera obscura, found something thrilling.

“One day when I walked down a road near my residence, I found a deserted field piled up with abandoned statues. That was exactly what I was searching for,” said Binoux.

A gigantic figurehead was one subject. It looked as if it had traveled through time and it sat firmly in the wild brushwood, with broken hand-parts scattered around it on the ground. In another picture, the photographer took a lower angle, peeping on a statue standing far away, which was flooded in a field of soaring horsetails. The figure is in a traditional outfit commonly seen in the last century, making an overlooking gesture with one hand waving.

These statues are all anonymous. No one can tell exactly what they represent or where they come from.

“What I am interested in is not historical remains, whose significance has already been discovered, told and recorded. I am fascinated by those things that are insignificant, something that no one cared about,” said the artist.

There are two more works in the series related with statues, taken in a place near the Phoenix Creative International, which is a creative industrial park transformed from a local cement plant in 2008.

The area where she stopped and photographed used to be a town located southwest of Hangzhou and was later merged into the city districts in the process of urbanization.

The G320 Expressway cut through the town. Ever since China Academy of Art built a campus north of the expressway, the creative industry has spread its wings, with studios, companies and art courses all sweeping into the area. 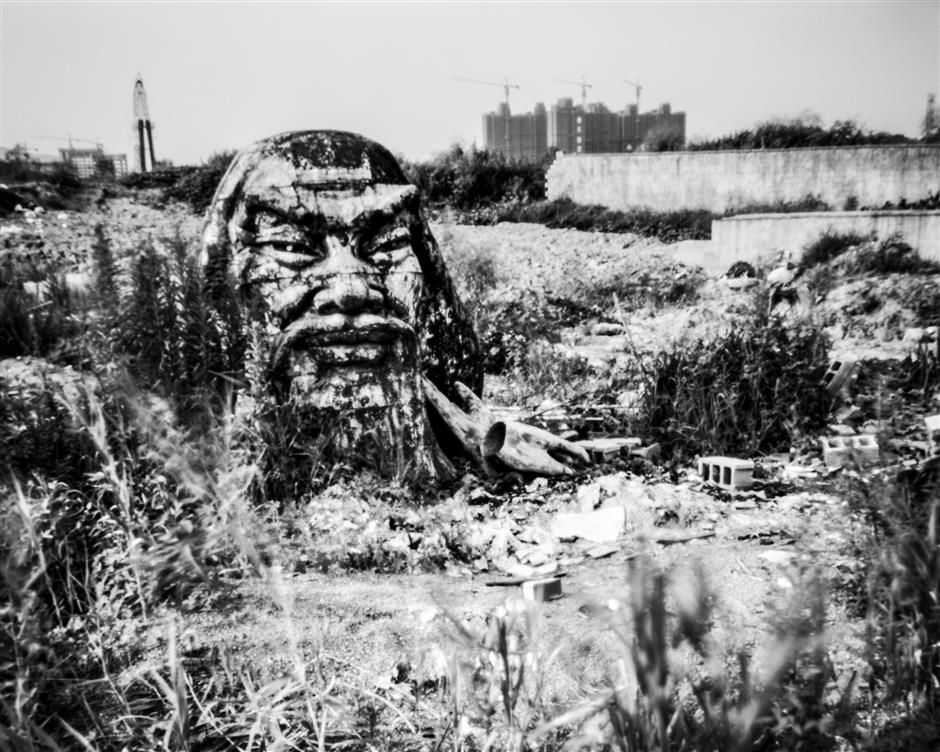 “Figurehead” in the series “Amplitude” by pinhole photographer Sandine Binoux

A lot of Binoux’s works depict the contrast between old and new and of order and disorder: A fallen tree beside a puddle projects new high-rise buildings across the street; a single house left in front of an office building in a demolished field; a postcard scenery with construction garbage left on the foreground. It is an area in fast transition.

The artist talked to people she met when she was working there. She met someone fishing in a forsaken pond. Others grew vegetables or picked up bricks from the demolished site.

“I was surprised most of them were indifferent. That is what life is,” said Binoux.

But one lady she met was extremely upset that nothing has been built on her original home. And she tried to move back and rebuild her house with materials collected from the derelict site.

Zhao Jianmin in his 30s, who has lived in the area all of his life, was one of those relocated. He now resides with his family in a new apartment using the reimbursement allocated from local government.

“We knew that sooner or later we would have to move out. The government has a bigger plan for the area’s development,” Zhao told Shanghai Daily. 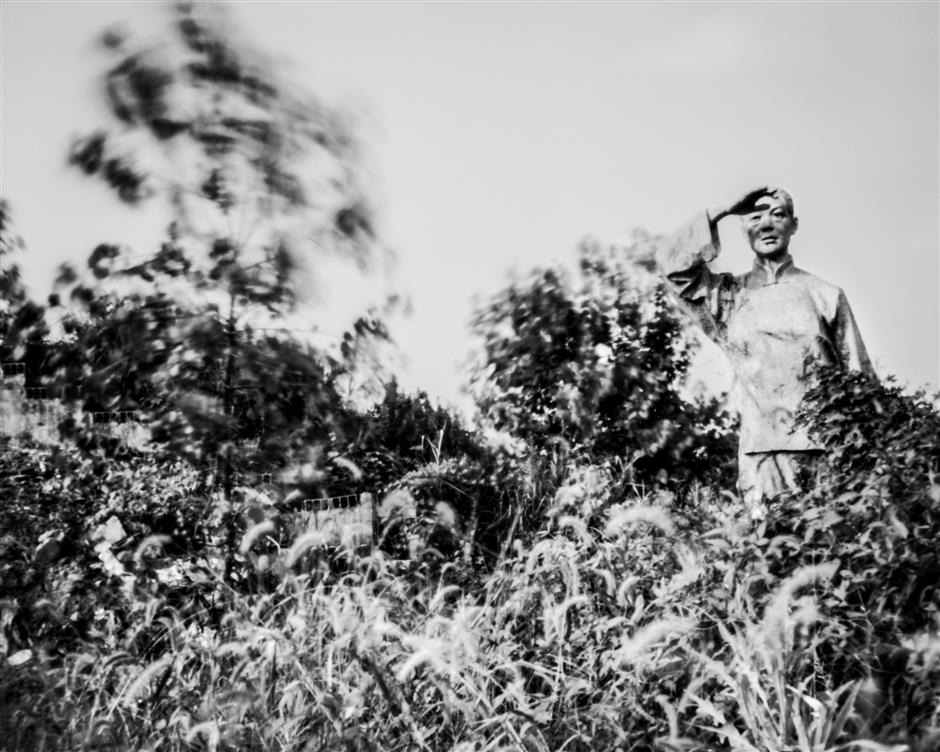 “A statue” by Sandrin Binoux

Binoux confessed very few locals she met understood why she, as a foreigner, turned her camera on the ruins. For her it was natural. The theme of “ruins” is deeply rooted in the painterly tradition of Romanticism, which emanated from Germany in early 19th century. The composition in her works is highly influenced it.

She used a French word “pittoresque” to describe her subjects, which is something she thinks is worth to be recorded aesthetically.

“She offered a viewpoint from the otherness,” said Liu Guangli, the artist’s project assistant, “for those that we as natives are accustomed to.”

In a lecture she delivered at the opening, Binoux emphasized to her audience that she did not refuse digital technology, but was merely picking the right tool for her subjects.

And it was perhaps somewhat fitting when she added: “Pinhole photography is an ode to the slowness.”

Date: Through October 19 (closed on Mondays)

(E-art has facilitated the interview with the artist.)