Ballad singing in most 'melodious' dialect

With a history of more than 2,500 years, Suzhou has long been known as the “Paradise on Earth” in China and “Venice of the East.”

The city, which is located in the Yangtze River Delta on the shores of Taihu Lake and only about 84 kilometers northwest of Shanghai, has been an important center of China’s silk industry for centuries and produces a great variety of top quality silk products.

Its dynamic thoroughfares of canals, rivers and crisscrossed waterways are among the oldest and the most captivating in the world.

Every year, the city attracts millions of tourists from home and abroad for its breathtaking landscapes, grandiose temples and pagodas, exquisite stone bridges, delicate food and extremely charming classic gardens. Nine of these ancient private gardens, including the Humble Administrator’s Garden, Lingering Garden and Master of the Nets Garden, have been included in the UNESCO’s World Heritage List.

No wonder, Marco Polo (1254-1324), a Venetian merchant traveler and the first European who left behind a detailed chronicle of his experience in China, called Suzhou a “large and splendid city.”

However, what gives the city the power to play an essential role and exert great influence throughout the history of China is not only its bustling businesses, advantageous location and abundant resources, but also its culture.

Suzhou, the cradle of “Wu culture” (Wu is the name of an ancient kingdom in the area), has brought forth a great number of famous scholars, statesmen, writers, artists, calligraphers, architects and the finest craftsmen of all trades in the country ever since its establishment.

Frederick Wade Mote (1922-2005), an American Sinologist, once said “Soochow (Suzhou) drew to it and fostered the arts of China? the literary arts above all, but also music and painting, calligraphy, the craft arts, the decorative arts and the minor arts that contributed to the elegant life.”

And among all these art forms, pingtan, a combination of storytelling and ballad singing in the Suzhou dialect, is one of the most noticeable in the country.

For many people, a visit to Suzhou is never complete without sitting in a teahouse and watching an episode of pingtan.

Popular in east China’s Jiangsu Province, where Suzhou is located, and its neighboring regions including Zhejiang Province and Shanghai, Suzhou pingtan originated from pinghua, storytelling or narration without music and singing? and tanci, narration with singing and music.

Pinghua became an accepted form of oral literature during the Tang Dynasty (AD 618-907) and the Song Dynasty (AD 960-1279). It was usually performed by a single narrator armed with a folding fan and a gavel, telling stories of historical figures, epics and events in history.

By mid-16th century, tanci, also called “story-singing” by some scholars of that time, appeared in the lower Yangtze River Valley, specifically in areas around Suzhou.

In the next century, storytellers in the region began to combine pinghua and tanci into a new storytelling style which was rendered in the soft, melodious Suzhou dialect. This new style later became known as Suzhou pingtan.

Suzhou pingtan soon won wide acclaim among audiences and reached its peak during the reign of Emperor Qianlong (1711-1799) of the Qing Dynasty (1644-1911).

The following two centuries witnessed further evolution and improvement of this art form.

According to a 1927 survey, the number of Suzhou pingtan performers in this region reached more than 2,000. In 1938, a local newspaper in Shanghai reported that about 20 radio stations in the city broadcast a total of more than 100 pingtan programs every day. 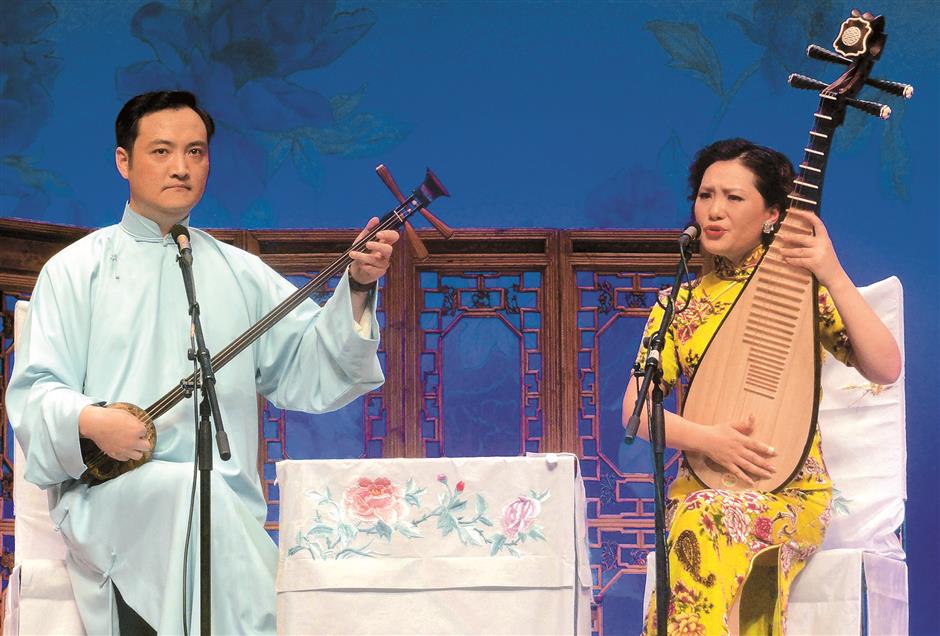 Suzhou pingtan can be performed solo, in duet or as a trio, with duet as the most common. The venues could be theaters or more often teahouses, where people could enjoy the performance over a cup of hot tea.

Today, Suzhou pingtan remains a popular art form of storytelling in the country.

Suzhou pingtan can be performed solo, in duet or as a trio, with duet as the most common. The venues could be theaters or more often teahouses, where people could enjoy the performance over a cup of hot tea.

The props are very simple: a table and two chairs. Player A carries a three-string zither and Player B plays pipa or Chinese lute.

In most cases, the regular audiences are rather familiar with the stories, including their plots and characters. But different pingtan performers usually bring to the audience different interpretation of the stories, different styles of music playing and singing as well as witty, personal comments.

To tell a complete story could take several days, weeks or even months, with a 1- or 2-hour episode each day.

The appeal of Suzhou pingtan must also be attributed to the language in which it is performed, namely, the Suzhou dialect, which is widely considered one of the most melodious sounds in China.

Soft, placid and smooth, it has more sophisticated tones and variations of intonation than Mandarin and most other dialects in the country.

Sheng Xiaoyun, a renowned pingtan singer in Suzhou, was once quoted as saying that “this kind of dialect goes easily with music and produces a beautiful and melodious singing genre.”

In 2004, Suzhou established a pingtan museum in an ancient quarter to house relics, historical documents as well as valuable audio and video files about this charming folk art.