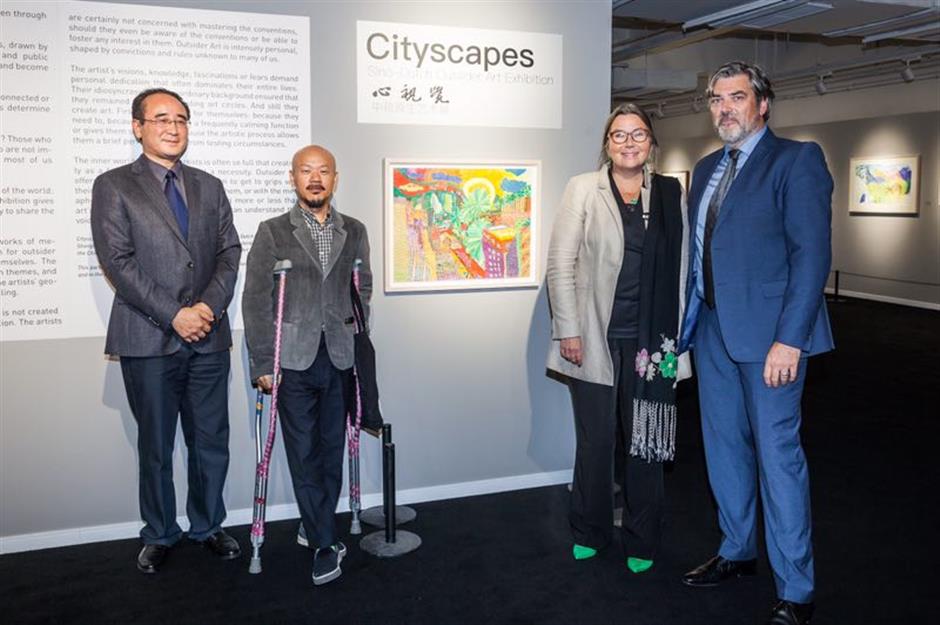 Anneke Adema (second from right), consul general of the Netherlands in Shanghai, and Yu Guangzhao (second from left), director Modern Art Museum, Shanghai, attend the opening ceremony of the exhibition.

Modern Art Museum, Shanghai has joined hands with the Dutch Consulate General in Shanghai and Natural Arts Center in Nanjing to break new ground and host an “outsider art” exhibition.

The exhibit, under the theme of “Cityscapes,” includes works from Lionel Plak, Jefke Dijkstra, Rob Morren, Yang Min and Qian Chen, who are all mentally challenged.

“‘Outsider art’ is the art of people who are not, in one way or another, included in society. When you take distance, you see things sharper, and I think it’s an added value of having ‘outsider art’,” says Anneke Adema, consul general of the Netherlands in Shanghai, at the opening ceremony last Friday.

The aim of the exhibition is to bring Chinese and Dutch “outsider artists” together and show their “non-standard” vision of a city, its people, streets and squares, architecture and Metro networks. The style of each work is a far cry from cultural norms and conventions set by today’s society.

Without any special education or training, “outsider artists” express their own inner voice freely and naturally. That is why their paintings seem to be quite difficult to interpret from the first sight. Adema suggests viewers use their feelings instead of logic to appreciate this kind of art.

“The language of art is universal, and everyone can understand it, whether a child or an adult. I felt a lot when I first saw these paintings. I could feel their energy. I hope this exhibition is for everyone to feel more and deeper from their hearts,” Adema says. 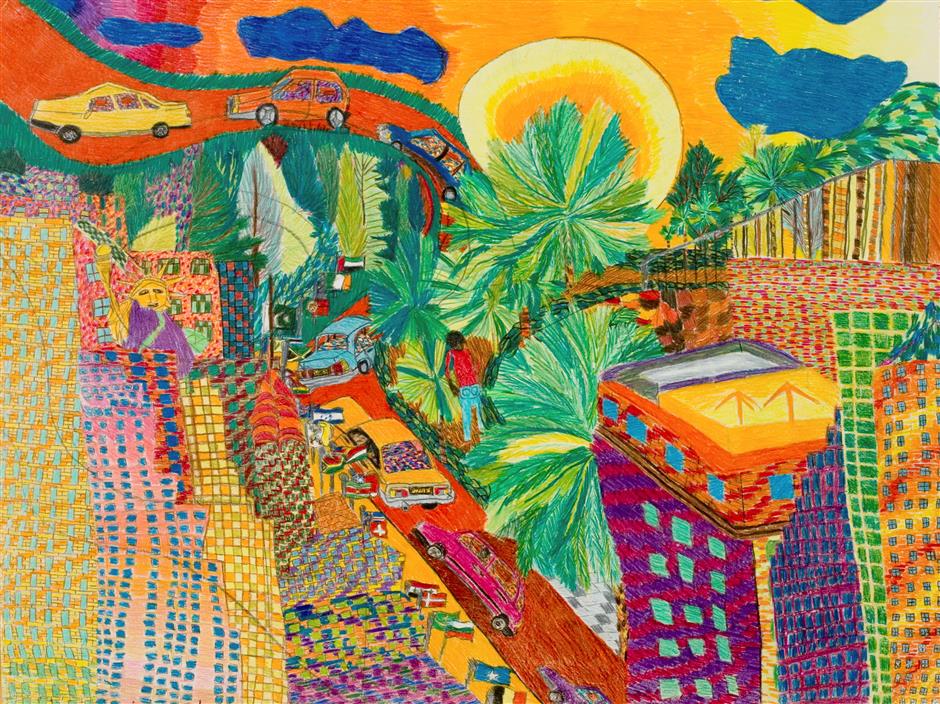 Artist Guo Haiping, founder of the National Arts Center which deals with the mentally challenged, opened the studio in Nanjing 11 years ago, where these “outsider artists” are provided with a room, a desk and painting tools.

“Eleven years ago when I was researching in a psychiatric hospital, I met a primitive artist who was a farmer,” says Guo. “He created a painting called ‘Three Mountains.’ I was very confused when I saw it. It was drawn from a bird’s-eye view. It was like he lived in the air. Their unique point of view gave me a deeper understanding of the freedom of the human spirit.”

In his studio, Guo doesn’t try to teach “outsider artists” but rather observes them painting in their free manner. During his work with them, Guo wrote a report titled “Madness of Art: The Chinese Art of Mentally Challenged Patients,” in which he studied the effect of mental disorders on artistic creation.

He discovered that people who are “very wise, extremely sensitive and adventurous” and who suffer schizophrenia are in conflict with the reality, and that’s why it reflects more sensitively and honestly.

Guo says “outsider art” is an unusual form of understanding the world. It helps the “artists” speak freely and the audience broaden the horizons of perception.

“For us, art is the highest expression of truth, and there's no differentiation in any kind of art,” says Yu Guangzhao, director Modern Art Museum, Shanghai. “I hope our museum serves as a platform for everyone who loves art to imagine, experience, share and ponder.” 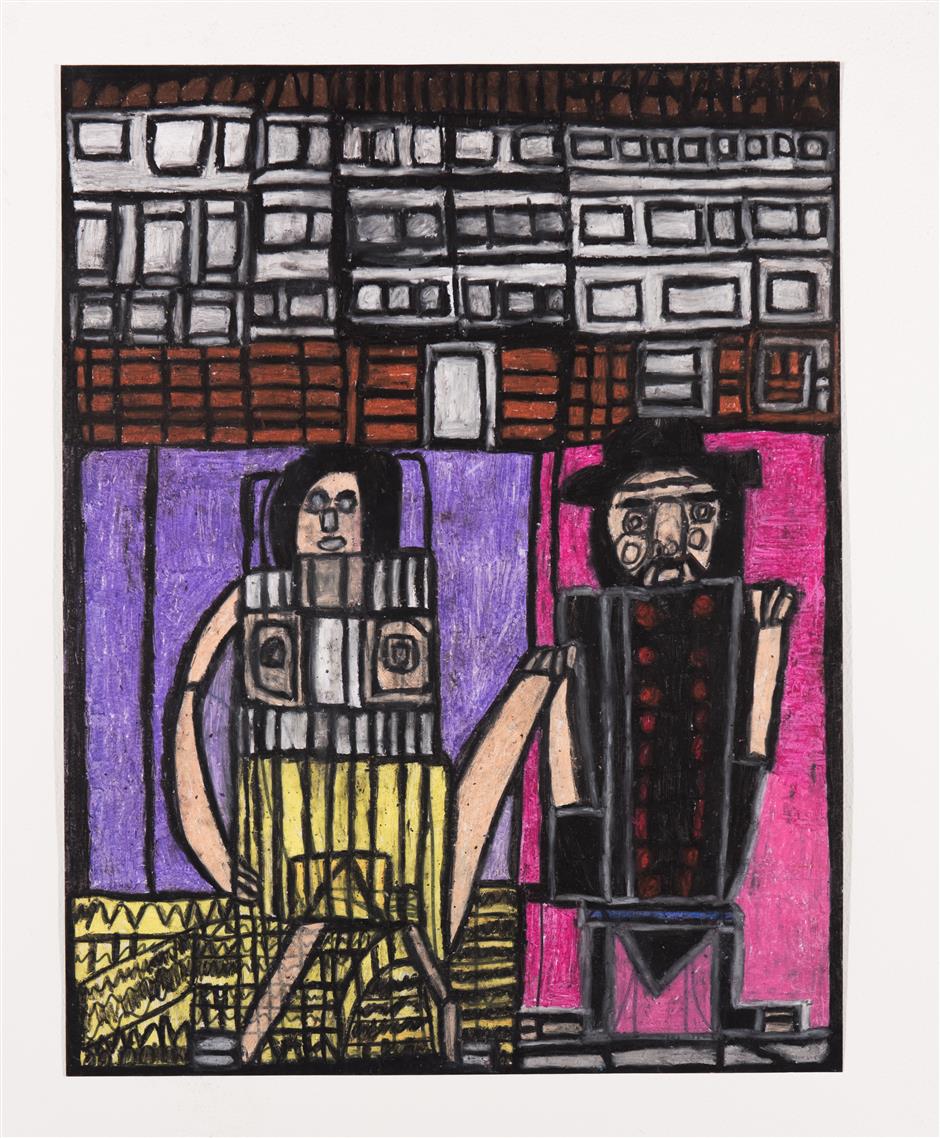