The former home of the upper-class Laou Kai Fook silk emporium on Nanjing Road E., now housing the American fashion brand Forever 21, has just completed a restoration of the facade.

The historical building at 257 Nanjing Road E. was once home to an upper-class silk emporium, the Laou Kai Fook & Co Ltd, in the 1930s. It has become a flagship store of American cheap-chic retailer, which just completed a restoration of the fa?ade.

According to Tongji University professor Qian Zonghao, author of “Nanking Road 1840s-1950s,” Laou Kai Fook was originally named Kai Fook and was established in 1860 on Jiujiang Road by the Zhu brothers, who were from Fujian Province. They later sold the shop to Cheng Yongliu of Suzhou.

The shop’s name was later changed to “Laou Kai Fook” — from the nicknames of Cheng and his new partners.

Bearded Li Shanshi was called Lao Shou Xing, or “Old God of Longevity.” Tall, slim Yao Yingsheng was nicknamed Chang Jiao, or “Long Leg,” while Cheng himself — short and fat — was named Da A Fu, or “Big Blessing.” They picked one word from each nickname, “Lao,” “Jiao” and “Fu” to become “Laou Kai Fook.”

The store later moved to No. 257 Nanjing Road E. and grew to become the city’s largest silk shop, which not only sold top-quality silk products, but also designed popular patterns. The shop came to be known as “The King of Chinese Silk.” It also sold wool fabrics and offered tailor-made services.

Professor Qian says the building came up following the widening of Nanjing and Henan roads.

A news story in The China Press in 1935 was the reason for his assumption. The report says the destruction of the old buildings on the property would allow the widening of Nanjing and Henan roads in accordance with the policy of the Shanghai Municipal Council. The fa?ade of the building had a broad curve at the corner, just like many of the newer buildings back then.

An archive photo of Hope Brothers, another old brand on Nanjing Road E.

The report also gave a description of the six-story building that was designed as S. A. Hardoon Building for the Hardoon Estate by architect Percey Tilley.

“The building will have black marble on the first floor, while the upper stories will be of brick. It will contain stores, offices and small apartments,” it said.

Laou Kai Fook turned the shop into a paradise of silk goods. In 1938, The China Press sent a reporter to write about the shop whose eyes were struck upon entry into the silk store at 257 Nanjing Road E. by “a 40-inch-wide crepe remaine, completed served with the brightest design of multi-colored, tiny flowers.”

“But that impression is soon lost, and one is left bewildered by the endless variety of silk and satin, flowered crepes, the height of fashion this year, are available by the tableful,” the reporter described.

The reporter noted the difficulty of choosing among so many attractive materials. However, the shop’s service was remarkable, whose staff “requests clients to be at their leisure — no one minds if a customer remains choosing and constantly changing orders for hours on end.”

“Apart from the flowered things, there are delicate matt white silks, which would make up into the most dignified gowns for formal evening wear — or striped silks in colors or cool blacks and whites, these latter for wise women who recognize the immense certitude and sense which a coolly reserved black and white ensemble gives to maturity. Crinkled crepes, kindly creatures who wouldn’t know the use of an iron if they saw one, suggest prettily that they would like to accompany you on your travels, or point out that you can look as fresh at the end of the day as at the start. In short, say ‘Everything in Silks’ and you say Laou Kai Fook,” the reporter wrote.

Another Tongji University professor Chang Qing adds that Laou Kai Fook & Co had made textile goods for the Cathay Hotel, including curtains, slipcovers, bed sheets and other textile decorations. All these exquisite textile goods were made from high-quality silk of Suzhou within half a year. Even famous American actor Charlie Chaplin purchased dozens of silk shirts from the shop when he visited Shanghai in the 1930s.

“The building has become one of the landmarks as part of Shanghai’s urban memory, along with the Sassoon House and Whiteway Laidlaw Building on Nanjing Road,” says professor Chang, author of the book “Nanjing Road — Origin of a Metropolis.”

“Laou Kai Fook and Hope Brothers which sold clocks and watches were two traditional brands on Nanjing Road. One Chinese and one Western, they have merged into daily life of Shanghai people for a very long time,” he says.

While Laou Kai Fook was having good business at 257 Nanjing Road E., another century-old company, Siemens China, opened a new office and showroom on the fourth floor of the same Nanjing Road edifice.

The building's interior has been greatly changed and become flagship store of Forever 21. 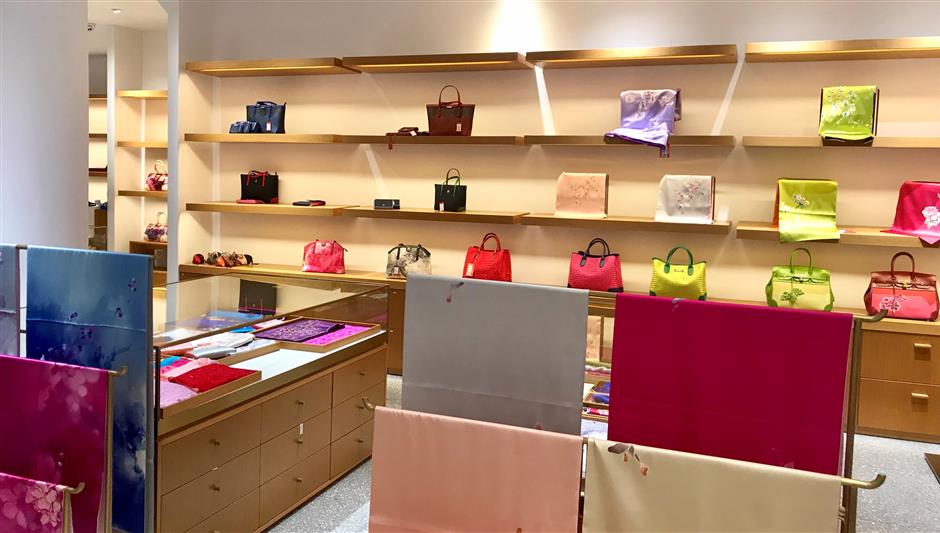 According to The China Press in 1937, the offices had been completely decorated and furnished in modern style, offering a pleasing note in business quarters. The showroom on the ground floor adjoining the building entrance displayed the company’s varied wares in a striking setting.

“The color scheme of the decoration is sea green, ivory and black, with counters and desks of simple, modern style. The visitors’ attention is drawn to a white colored frame extending the entire length of one wall, containing artistically executed advertisements for lighting fixtures, irons, electric stoves and other appliances, while quartz lamps, meters, wiring devices and countless other items are tastefully displayed throughout the room,” the report described.

In the 1930s, Siemens China was a branch of the German Siemens Works and maintained offices in today’s Guangzhou, Wuhan, Hong Kong, Nanjing, Beijing and Tianjin.

After 1949, Laou Kai Fook became a state-owned company but its fate on Nanjing Road has changed during the times. The building was renovated twice in 1993 and 1999 and later faced a big renovation when Huangpu District was upgrading business in the eastern section of Nanjing Road.

According to a report on “Textile Decoration & Technology” in 2012, to house young customers of the east section of Nanjing Road, Laou Kai Fook retreated to smaller shops in communities and maintained only a tailor-made studio in the former department store which had been renovated to be a big flagship of American fashion retailer Forever 21 Inc.

The four-story, 8,000-square-meter branch in the 1930s silk emporium was one of its largest flagships around the world and was regarded as a symbol that middle and small American enterprises entering the attractive Chinese market of expected 400 million middle-class consumers in 2020.

The silk paradise of the 19th-century Laou Kai Fook has vanished from Nanjing Road, but a new Chinese silk brand, Xiuniang Silk from Suzhou which has new concept of design on traditional silk products, restored the 1930s British Whiteaway, Laidlaw & Co Ltd building and opened a grand flagship on the Bund end of Nanjing Road.

The dramatic change of century-old shops on Nanjing Road is a mirror of Chinese brands, old or new, fronting the change and challenges of times.

Tips: The building’s interior has been changed greatly but it’s interesting to see the logo of Chinese brand “Laou Kai Fook” and American brand Forever 21 juxtaposing on the fa?ade near the entrance.

The logo of Laou Kai Fook is still on the building.

Do you remember the days of “silk skirts and petticoats?” Women were proud of that rustle which gave them a feeling of well-dressed elegance that only silk could give. But petticoats have turned out to a greater extent and though we are now learning to luxuriate in taffeta again, that “silken rustle has been softened." Nowadays we look for textures that will drape softly into frocks in which we can walk silently.

We must follow the mode, but silk is a versatile fabric lending it to every mode and every type of dress. It is the strongest of textile fabrics, and its elasticity helps garments to keep them shape and to resist erasing. The better types and grades of all silks are to be found at Laou Kai Fook at 250 Kuikiang Road, and by all means, give their things a look before definitely deciding on that Christmas frock.

For centuries, Chinese silks of lovely colors and designs have lent glamour and romance to life. And Laou Kai Fook is carrying out that tradition, offering you an amazing array of silks from which to choose.

An ancient legend, they will tell you, attributes the beginning of silk culture to a Chinese empress who cultivated the silkworms, reeled the silk fibers from their cocoons, then dyed and wove them into a lustrous fabric, with which she made it a superbly beautiful ceremonial garment for the emperor. That was over 4,000 years ago, so the story goes, and posterity has deified this noble lady as the Goddess of Silk.

Today, there are silk gowns in every wardrobe.

If necessity you must shop for silk, so when you do so at Laou Kai Fook’s you will find a wide range of qualities and prices in all sorts of silks from taffeta and lustrous lengths of satin to cut velvet and brocade.