The longitudinal plane of Chenghuang Temple, including its opera stage and wings

The unique heritage of Ninghai County’s ancient Buddhist and operatic cultures is thriving as modern generations recognize the historic value of structures built in homage to religious, ancestral and creative artistic values.

Ninghai County has, from 2010, been recognized by Chinese Folk Literature and Art Association as a unique Chinese ancient opera stage culture county. The area is home to more than 120 opera stages over 100 years old, including 10 classified as national key cultural relic protection units by the State Council in 2006. They have been completely preserved through application of meticulous restoration techniques.

Chongxing Temple in Xidian Town is a prime example, a site where local Yueju Opera troupes gather to celebrate the birthday of a local Buddha. The singers perform traditional jubilant operas in homage to the Buddha on the 18th day of the 10th lunar month at the temple.

Local people watch these performances on the ancient stage preserved inside the temple. This tradition has continued for 30 years thanks to the supporting funds of a local merchant. The ancient stage and its temple have been preserved for more than 100 years since the Qing Dynasty (1644-1911).

Most of the ancient opera stages in Ninghai were built inside both temples worshipping Buddhas and ancestral halls built in tribute to ancestors and have similar quadrangle courtyard structures. Their stages, on the central axis of the courtyard, are usually adjacent to the gatehouse on the southern side and directly face the main hall in a northerly direction.

Local cultural heritage expert Xu Peiliang explains the design of the temples and their differences.

“In Buddha’s temples, the stages directly face the Buddha sitting in the main hall. In ancestral halls, the stages face the wooden memorial tablets on which names of dead ancestors are carved,” Xu said.

Xu added that people used to invite troupes to perform operas in homage to the Buddhas and the ancestors.

The stages are usually open on three sides. They are set within a pavilion-like structure covered by a tiled roof with overhanging eaves. They are raised 1.6 to 2 meters off the ground by wood pillars in four corners. Below the stage is an open area where people can stand or sit on seats to watch the opera. Two additional two-tiered wings to the east and west of the stage also accommodate audience members. The top seating area in these wings was traditionally set aside for aristocrats to watch operas.

“In ancient times, men and women were not allowed to sit together in the temples while watching the operas. Men had to watch from the eastern wing and women from the west. The eastern side in ancient China represented a noble position, and males were accorded more respect than females. So only the men could watch operas in the eastern wing,” Xu explained.

Women also were not allowed to hang out freely in ancient China. They spent most of their time making embroidery inside private rooms at home and could only attend operas at temples and ancestral halls during celebration days. Watching operas provided a rare opportunity for girls to meet prospective husbands.

Two wings in a temple were set opposite each other so the men and women sat on either side while watching operas.

“The Chinese idiom liang xiang qing yuan (两厢情愿) infers that the occupants of both wings wanted to fall in love with each other,” he said. “It described opera viewing situations when a man in the eastern wing and a woman in the western wing were attracted.” 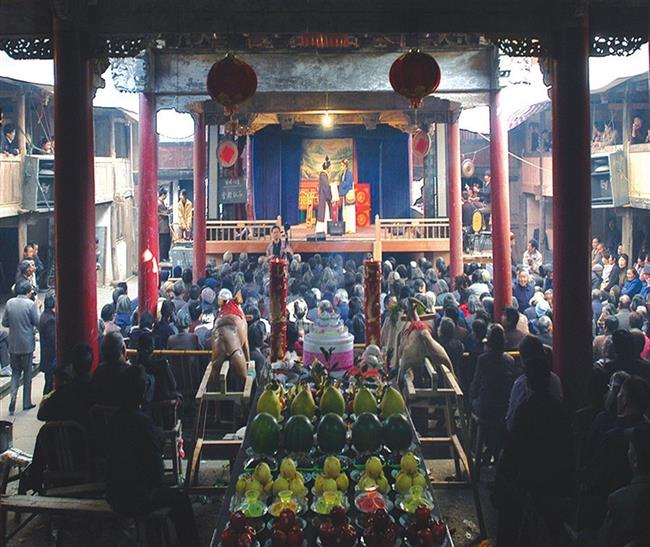 Fengshui played a major role in the design of temples and ancestral halls. Builders paid special attention to their location to ensure harmony with the surrounding environment. The good fengshui of a location could safeguard the building while bad fengshui could result in disaster.

“It was important to choose the right location for a temple or an ancestral hall as it was the most significant structure for a village or a single family,” said Xu.

For example, Shuangzhi Temple in Qingtan Village includes an ancient opera stage. It is near both the river and the mountains, auspicious symbols that connote good fengshui.

Ancient opera stages in Ninghai are outstanding also for their delicate building crafts, including splendid ornaments and incredible wooden structures.

The Chenghuang Temple opera stage, preserved from the Qing Dynasty and extensively restored in 1935, retains its especially delicate building crafts. This is due to the significant funds provided by a local community with a stronger economy than other remote villages. It is located on Taoyuan Road S. in Ninghai County.

Built 1.66 meters above ground, the stage in the 1,600-square-meter Chenghuang Temple is 5.25 meters wide and 5.15 meters long. It features sculptures on the roof and a colored wooden floor.

Small and colorful figure sculptures are perched on the edge of its tiled roof and include a zhuangyuan dressed in red robes. Zhuangyuan is a title that honored a scholar who achieved the best score at the highest level in the Chinese imperial examinations. The temple also has sculptures of generals dressed in red or white uniforms, their arms clasped in their hands.

The zhuangyuan and sculptured figures represent the community’s hopes that outstanding achievements in academic or military pursuits can be fostered in Ninghai County.

The wooden architrave of the Chenghuang Temple stage features a colored painting crafted during the Republic of China (1912-1949) period. The scene depicts an audience of fat officers, thin gentlemen and elegant ladies watching opera.

A long-stemmed hookah for smoking tobacco can be clearly seen in the hands of men in the painting.

There are also round silk fans, popular accessories for women during the period.

The best embodiment of the intricate wooden structures of ancient opera stages is a caisson ceiling, namely zaojin(藻井).

It is a traditional Chinese wooden ceiling used in palaces or temples and generally consists of a sunken panel made of compacted wooden beams.

Both zao (algae) and jin (well) are related to water and are properties integrated into the wooden ceiling to prevent it from catching fire.

The beams are connected through mortise-and-tenon joints, a traditional Chinese building method that has been in practice for thousands of years. It involves one beam with a convex end, called the tenon tongue, being joined tightly with another which has a mortise hole. The method does not require nailing and is considered by local folk as resembling a hencoop woven with bamboo so they colloquially describe the caisson ceiling as a “hencoop ceiling.”

The traditional caisson ceiling is often a thing of beauty with colored lacquers and delicate ornaments. It is also sunken inward to amplify and enhance the sound from the stage of performers. Some caisson ceilings were made in the form of a trumpet to make the sounds louder.

“An ancient opera stage could even have three-caisson ceilings but that kind of luxury can now only be seen in Ninghai,” said Xu. 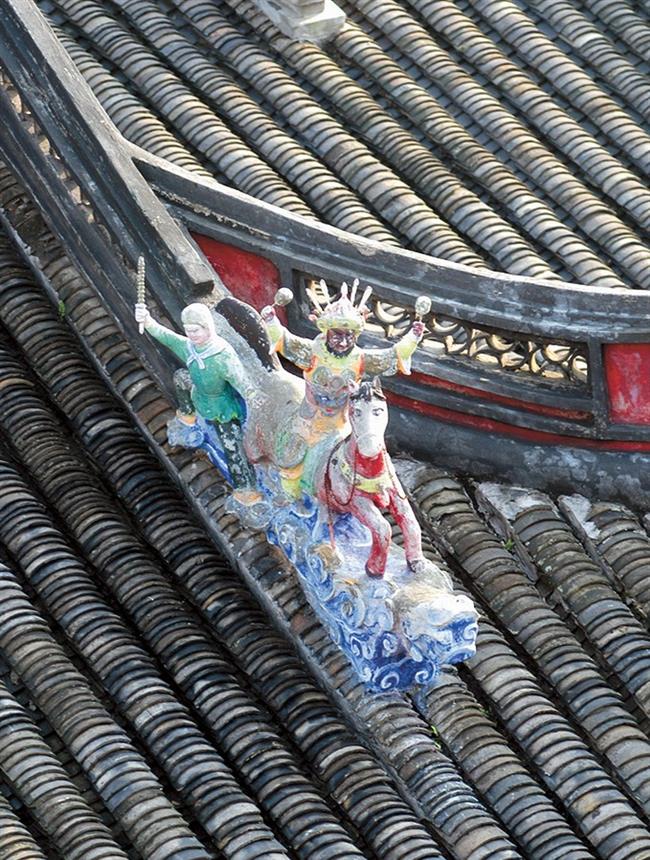 There are three ancient three-caisson ceiling opera stages in Ninghai, including that at Chongxing Temple.

It was rare to see a costly three-caisson ceiling stage in rural areas in ancient China. Situated between Shijia Village and Houxi Village, Chongxing Temple is overseen by both local communities whose original families had the surname Shi. The descendants of Shi built the three-caisson ceiling structure in tribute to the achievements of Shi Xianwen, an official in the imperial court of the Song Dynasty (960-1279).

There are three ceilings above the Chongxing Temple stage, one on the performance stage, the other two in the two-room corridor leading from the stage. The corridor connects with the main hall, enabling visitors to watch the opera performance.

Ancient stages with quadrangle courtyards represented the status and achievements of a family of a certain surname. To ensure the excellent style and quality of structures, some families hired two groups of craftsmen to build them, allocating half to each group and setting up the two to compete. This method aimed to ensure the highest quality craftsmanship. The two groups would start construction at the same time and each had to ensure their half would be compatible in quality and precision. Ancient opera stages built in this way were usually more impressive in style and quality thanks to the combined building expertise of the two groups of craftsmen.

The stage in Zhu’s ancestral hall in Meilin area was built using this method. Observers can see that the lacquer and characters on the left and right sides of the horizontal inscribed board on the stage are different in color but are joined together perfectly.

The surviving ancient opera stages with quadrangle courtyards, either in temples or ancestral halls, can now mostly be found only in remote mountain areas.

“During the ‘cultural revolution’ (1966-76), people were not allowed to watch operas and many ancient stages were demolished. Later on, the urban development of Ninghai resulted in the destruction of most stages in downtown areas,” said Xu. 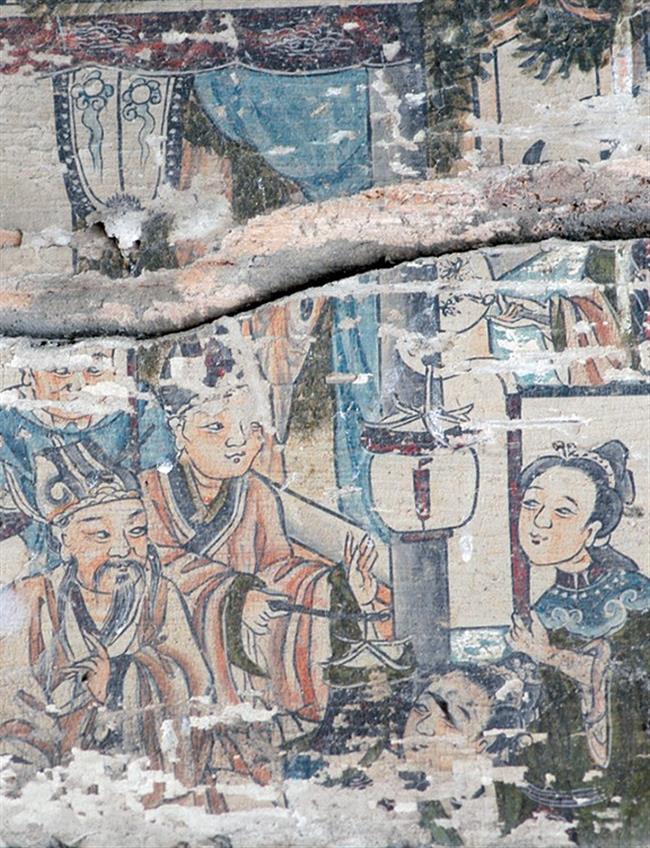 The following ancient opera stages can also be found in Ningbo

Kuajing Bridge, or Opera-stage Bridge as local people call it, is a single-span structure on which actors performed operas.

It is located in Hengjing Village, Yinzhou District and was built in 1804. People from neighboring villages used to watch performances on the bridge while sitting in their boats on the water below.

It is now a national key cultural relic approved for protection by the State Council in 2001.

One opera stage was built to pay homage to Mazu, a Chinese sea goddess worshiped by people in coastal areas. They believed that Mazu could safeguard fishermen and others involved in maritime activities. The stage was built so merchants resting in Qing’an Guild Hall could watch operas.