Spring Festival ─ What is that?

For Chinese around the world, the New Year begins on Chinese Lunar New Year, not January 1.

Each Chinese lunar year is associated with an animal sign according to the Chinese zodiac. This coming one is the Year of the Dog which begins tomorrow.

Legend has it that Chinese New Year  — the first lunar month — started with a mythical beast called Nian which lives under the sea or in the mountains. The character nian means “year.”

Nian would eat villagers, especially children. One year, all the villagers decided to hide from the beast. An old man appeared before the villagers went into hiding and said that he would stay the night and take revenge on the monster.

The old man put up red paper and set off firecrackers. The day after, the villagers came back to the town and found that nothing was destroyed. The villagers then understood that Nian was afraid of the color red and loud noises.

When another new year was approaching, villagers would wear red clothes, hang red lanterns and red scrolls on windows and doors. People also used firecrackers to frighten away Nian. The beast never attacked the village again.

In the days leading to the Lunar New Year celebration, Chinese families give their homes a thorough cleaning. It is believed that cleaning sweeps away the bad luck of the preceding year and makes their homes ready for good luck.

Homes are often decorated with paper cutouts of Chinese auspicious phrases and couplets.

Purchasing new clothing and shoes also symbolize a new start. Any haircuts need to be completed before the New Year, as cutting hair on the day is considered bad luck due to the pronunciation of the word “hair” (fa) and the word for “prosperity.”

On this most important occasion of the entire year, family members usually gather together to eat nianyefan (New Year’s Eve dinner).

The venue will usually be in or near the home of the most senior member of the family. The dinner is large and sumptuous. Traditional dishes include meatball and fish.

Most reunion dinners, particularly in the south, also feature specialty meat such as wax-cured meats like duck and Chinese sausage and seafood — lobster and abalone — that are usually reserved for this and other special occasions.

In most areas, fish (yu) is included, but not eaten completely.

The remainder is stored overnight, as the Chinese phrase “May there be surpluses every year” (niannianyouyu) sounds the same as “Let there be fish every year.”

Red packets, known as hongbao, are gifts presented at social and family gatherings such as weddings, birthdays or holidays like Chinese New Year.

Red symbolizes good luck and wards of evil spirits, and the red packets are sometimes distributed during the reunion dinner. They often contain money in certain numbers that reflect good luck and honor.

Traditionally, red envelopes are passed out by married couples or the elderly to unmarried juniors. It is also common for adults or young couples to give red packets to children.

Custom holds that the amount should be an even number.

Red envelopes are kept under the pillow and slept on for seven nights after Chinese New Year before opening because that symbolizes good luck and fortune. 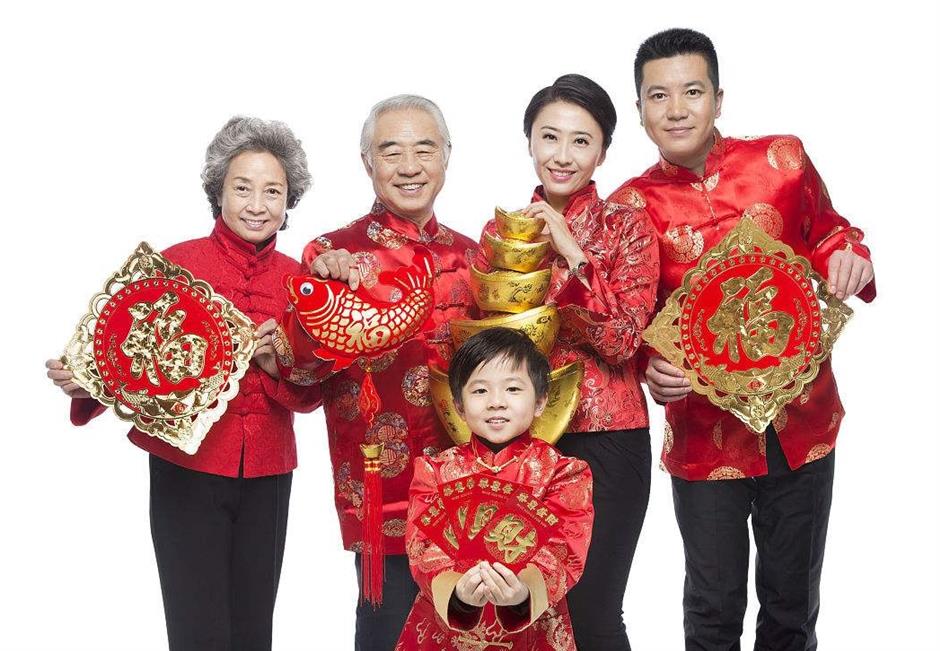 The Chinese New Year’s Day is for welcoming the deities of the Heaven and Earth, officially beginning at midnight of the New Year’s Eve. Traditionally it is to light fireworks, burn bamboo sticks and firecrackers and to make as much of a din as possible to chase off the evil spirits. But now many regions across China, including Shanghai, have banned firecrackers and fireworks due to pollution and safety concerns.

Most importantly, the first day of Chinese New Year is a time to honor the elderly, and families visit the oldest and most senior members of their extended families, usually their parents, grandparents and great-grandparents.

The second day of Chinese New Year is known as kainian, or “beginning of the year” (开年).

Married daughters visit their parents, relatives and close friends. Some believe the second day is also the birthday of all dogs and remember them with special treats.

The third day is Chigou’s Day (chigou meaning “red dog”), an epithet for the God of Blazing Wrath.

Rural villagers continue the tradition of burning paper offerings over trash fires. It is considered an unlucky day to have guests or go visiting.

Hakka villagers in rural Hong Kong in the 1960s called it the Day of the Poor Devil and believed everyone should stay at home. This is also considered a propitious day to visit the temple of the God of Wealth and have one’s future told.

This day is the God of Wealth’s birthday. In northern China, people eat jiaozi, or dumplings. It is also common for people to set off firecrackers to get Guan Yu’s attention, thus ensuring his favor and good fortune for the new year.

Guan Yu is widely referred to as Lord Guan, while his Taoist title is Holy Emperor Lord Guan.

Temples and shrines dedicated exclusively to him can be found across China and other places with Chinese influence such as Vietnam, South Korea and Japan.

Guan is also worshipped as the Door God in Chinese and Taoist temples, with portraits of him being pasted on doors to ward off evil spirits.

The seventh day, traditionally known as renri (the common people’s day), is when everyone grows one year older.

In some overseas Chinese communities in Southeast Asia, such as Malaysia and Singapore, it is also the day when tossed raw fish salad, yusheng, is eaten for continued wealth and prosperity.

Another family dinner is held to celebrate the eve of the birth of the Jade Emperor, the ruler of Heaven.

People used to return to work on the eighth day, therefore store owners would host a lunch/dinner with their employees, thanking their employees for the work they had done for the whole year.

This is the day to offer prayers to the Jade Emperor in the Taoist pantheon.

This day, called Ti Kong Dan, is especially important to Hokkien, even more important than the first day of the Chinese New Year.

This day is celebrated as the Yuanxiao Jie, or the Lantern Festival.

Rice dumplings, or tangyuan, a sweet glutinous rice ball brewed in a soup, are eaten on this day. Candles are lit outside houses as a way to guide wayward spirits home. Families walk the street carrying lighted lanterns.

In China, Malaysia and Singapore, this day is further celebrated with individuals seeking a romantic partner, akin to Valentine’s Day.

Normally, single women wrote their contact number on mandarin oranges and throw it in a river or a lake while single men would collect them and eat the oranges.

The taste was an indication of their possible love: Sweet represents a good fate while sour represents a bad fate.

This day often marks the end of the Chinese New Year festivities. 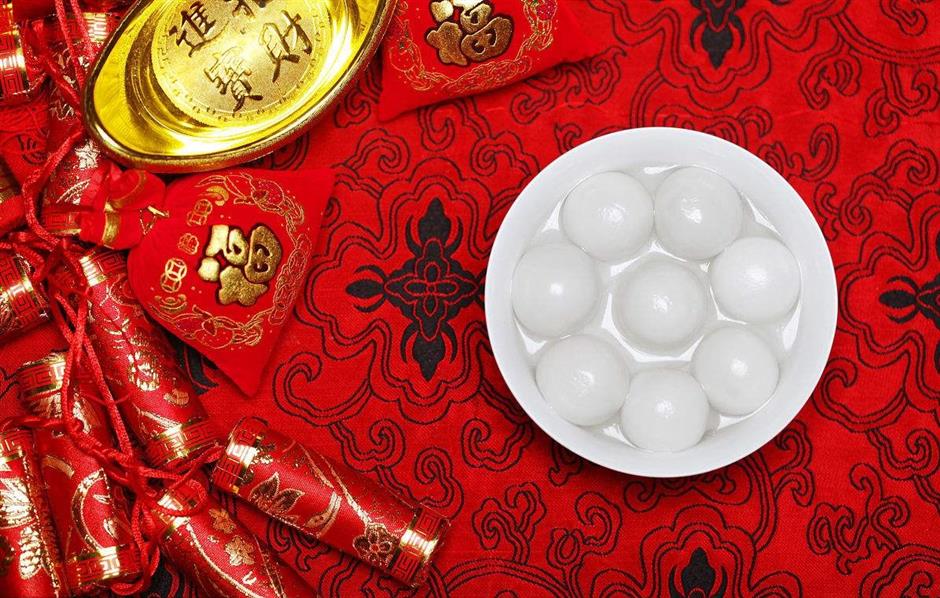 Tangyuan, or rice dumpling, is a traditional food for the Lantern Festival.