Fuxi and Nuwa create the world 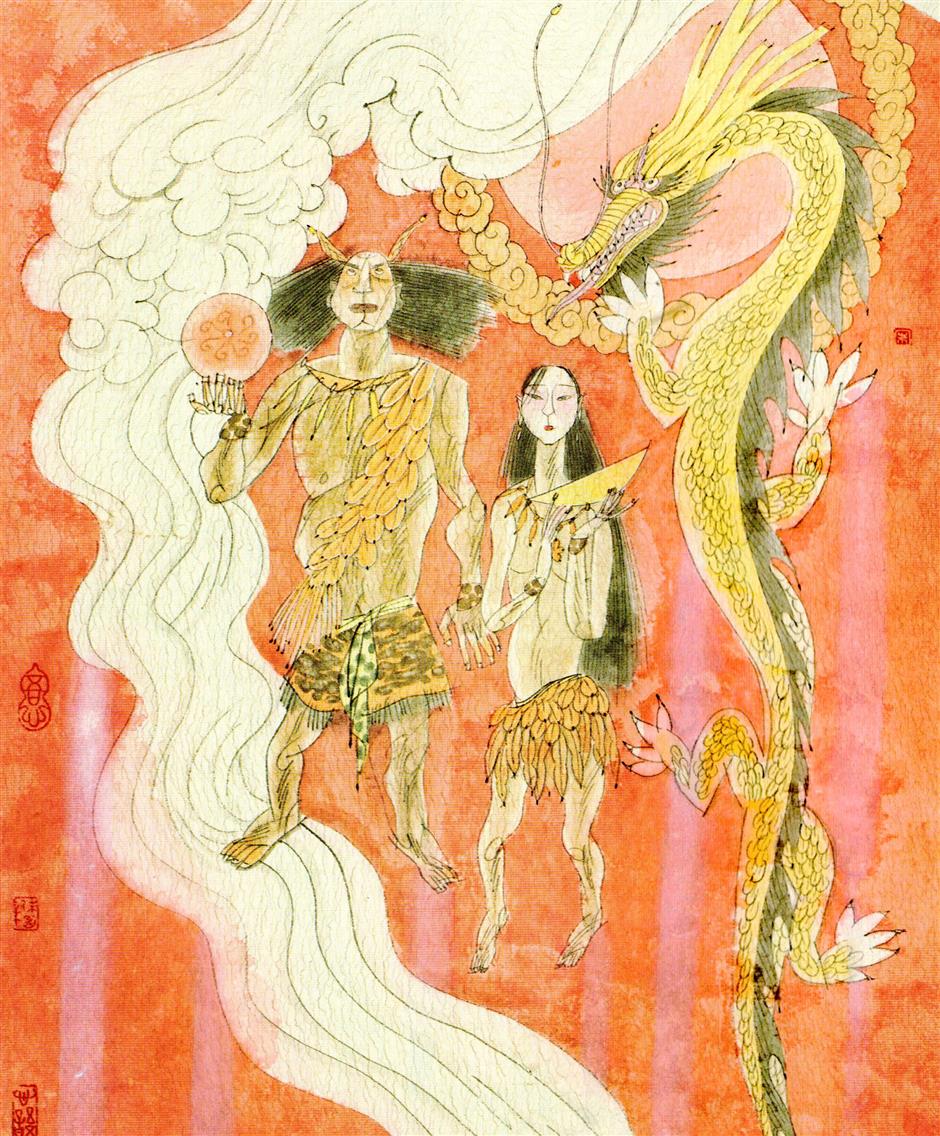 Fuxi and Nuwa are said to be the earliest ancestors of mankind.

Though the giant Pangu is widely acknowledged in China as the creator of the world, there is another version of how everything began. It is the story of how the first couple, blessed by the gods, made the world what it is today.

Fuxi and Nuwa are in some ways similar to Adam and Eva in the Bible, except that they did not make their terrible mistake.

When the universe first began, it was merely chaos with restless yuanqi, or original energy, filling the void.

After innumerable years, the energies collided and intertwined, forming two giant energy flows. One was black and the other white, the colors of yin (negative, cold) and yang (positive, warm) in Chinese philosophy.

The two energy flows kept colliding, intertwining, merging and swirling increasingly fast. In the process, the energy mass glowed red, yellow, blue, white and black, which were the colors of the five elements – fire, earth, wood, metal and water.

With a loud thump, the energy mass exploded. Some of the light and clear energy ascended to become the sky, sun, moon and the stars, while the heavier and murkier descended to form the earth, mountains, rivers, trees and grass.

The core part of the energy mass kept swirling, absorbing essences from the sky, the earth, the sun and the moon. Two curling human figures loomed in the core, with six smaller energy masses swirling around.

The first small energy mass burst. A rooster and a hen popped out, fluttering their wings and running into the woods with happy chirps. Soon, the second mass burst, sending a pair of barking puppies to the land. The third, fourth, fifth and sixth burst one after another, giving birth to a pair of pigs, a pair of goats, a pair of cattle and a pair of horses. They are the domestic animals widely kept by Chinese.

At the final blast, the large core exploded. A man and a woman appeared in the air. The man held a golden sun-shaped wheel while the woman had a shining moon-shaped instrument. They shared the same lower part covered with beautiful scales like a snake.

Fuxi and Nuwa stood at the summit of the Kunlun Mountain.

They were Fuxi and Nuwa, the earliest ancestors of mankind. Their shared lower part split and turned into legs the moment they landed on the earth. Fuxi, the man, had dragon horns on the top of his head, and round eyes similar to the sun. Nuwa, the woman, had fine eyebrows and upwardly-slanting eyes, like the crescent moon. They looked up at the sky and saw gods and goddesses approaching.

Xihe, Goddess of the Sun, came in a carriage drawn by six half-dragon, half-horse beasts. The 10 sons of Xihe, who used fiery clouds as their clothes, escorted her.

Changxi, Goddess of the Moon, also came, leisurely escorted by her divine maids. She used laurel as a canopy and held a gold rabbit and a jade toad in her arms. The Supreme Deity Haotian stood behind the sun and the moon goddesses, faintly discernible.

The God of Wind puffed up his cheeks, blowing gentle breezes on their faces. The God of Rain slightly tilted his jade vase to cause rain to fall. The gods and goddesses in charge of thunder, lightning, fog and frost all came to join the celebration. Countless spirits danced in the auspicious light. Flowers, grass, tress, birds and beasts hailed the birth of humankind.

As night fell, Fuxi and Nuwa rushed to the top of the Kunlun Mountain. The legendary Kunlun was a divine mountain about 3,300 meters high, covering an area of nearly 160,000 square meters.

It was surrounded by a ceaseless torrent. The water was so clear and light that even a feather would sink to the bottom. Nearby, fire blazed high into the sky, as a defense of the mountain. It was the mountain closest to the heaven, where word from the gods could be heard.

Fuxi and Nuwa stood at the summit. Two flames drifted from heaven and landed on their fingertips. They set two separate fires with the flames at the mountain top.

Nuwa played the sheng, a 13-pipe wind instrument which she made from bamboo and jade.

Fuxi made a se, a 50-string plucked instrument, from a phoenix tree, and played gently. Nuwa played the sheng, a 13-pipe wind instrument which she made from bamboo and jade. Beautiful melodies lingered in the air.

The two knelt down and prayed to the gods for permission to marry as they felt so lonely in the world. They asked for signs: Let the smoke of the two separate fires become one if their marriage was approved, and let the smoke disperse separately if there were objections. Immediately, the smoke from the two fires gathered together and flew high to heaven.

Meanwhile, treasure trees on the Kunlun Mountain started to dance and jingle. Thousands of lotuses in Jasper Lake on the mountain top blossomed. The nine guard beasts of the nine gates of the divine mountain uttered a long roar.

Aware that they had been answered positively, Nuwa shied away. Fuxi chased her through nine creeks and nine hills to a giant tree.

Mankind began to flourish after Fuxi and Nuwa got married.