Acid attack victim is an artist, not a victim 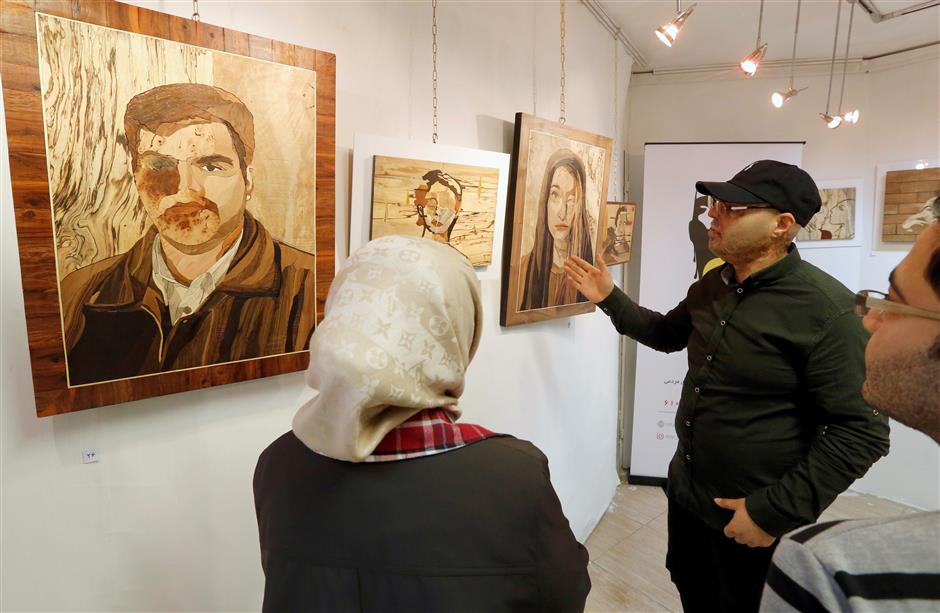 Mohsen Mortazavi (center), an Iranian victim of acid attack, presents his work at the Ashianeh gallery in Tehran.

Massoumeh Attaie does not want to be defined only by the evil that drove her father-in-law to blind her with acid in her face. She wants to be known as an artist.

The 35-year-old Iranian never got justice for the brutal attack eight years ago that left her permanently disfigured.

Her father-in-law threw acid in her face because she had sought a divorce, but under Iran’s Islamic law, her two eyes were worth only one of his.

And in the end, the family threatened that the same punishment would befall her son if she pressed charges. “I chose my son over justice,” she said.

This week she joined a group of other victims of acid attacks presenting their work at the Ashianeh gallery in Tehran to raise awareness and money.

Attaie makes pottery, sculpted bowls and statuettes. She now lives in Tehran with her 12-year-old son, having fled her family in Iran’s third city of Isfahan, and gives art classes to other blind people and proudly says she is “totally independent.”

“I hope this exhibition is encouraging for others like us to give them a bit of morale to come out from hiding away in their house and come back to society,” she said.

There have been repeated outbreaks of acid attacks in Iran. A spate of attacks in 2014 triggered protests and claims the culprits were targeting women wearing “immodest” clothing.

The most infamous case came in 2011 when a young woman, Ameneh Bahrami, was blinded by a man after rejecting his offer of marriage.

Public pressure meant the courts granted her full retribution, ordering him to be blinded in both eyes, though she spared him at the last moment.

Not all of the attacks have targeted women. Also presenting his work at the Tehran gallery was Mohsen Mortazavi, who was disfigured by a jealous colleague.

His artwork is a highly intricate type of portrait known as moaragh, made from wood offcuts.

Half of his self-portrait is how he once looked, the other half is obliterated by a dark blotch.

Money raised by the show went to Iran’s Association of Support of Acid Attack Victims.