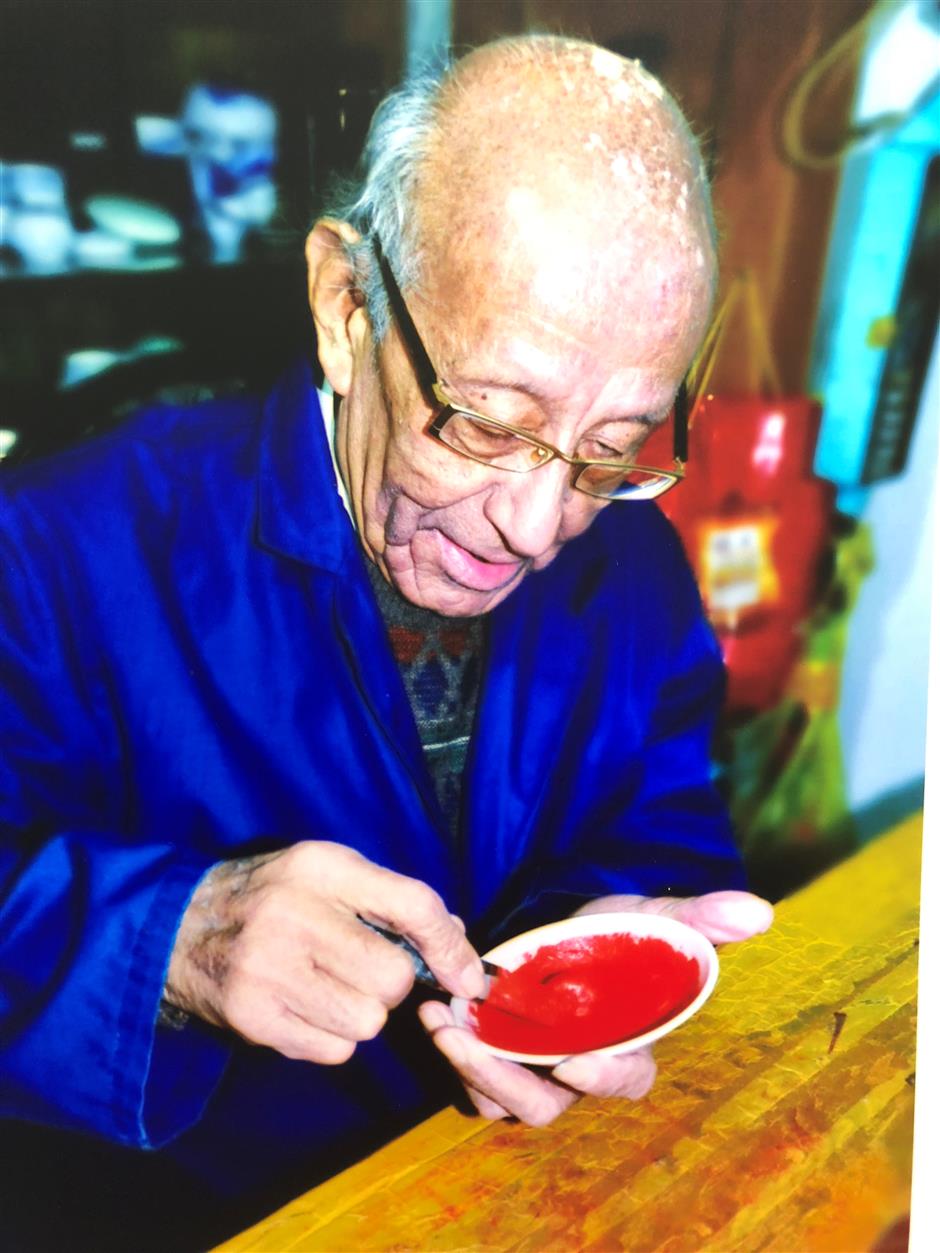 Gao Shixiong, 98, a master in the making of vermilion ink paste 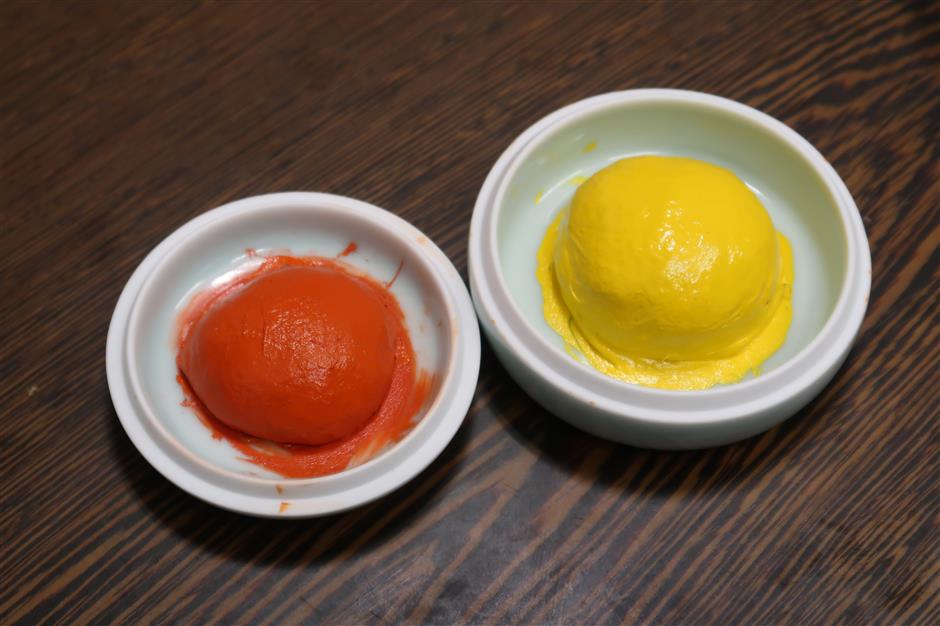 Vermilion ink paste, used for seals stamped on a painting or calligraphy piece, is not just a necessity for a work of art in China, but also a status symbol of the artist.

Bright red, smooth and with a rich luster, Lu’an vermilion ink paste is known “as precious as gold,” but what is more precious are the efforts of the paste’s inventors, protectors and inheritors of the process over almost a century.

Born into a rich family that ran drugstores in Shanghai and Zhejiang Province, Zhang didn’t show much interest in the family business. Instead, he was obsessed with calligraphy and seal carving.

In 1930, Zhang decided to invent a quality, refined vermilion ink paste with the finest color and luster. He purchased a machine from Germany at the cost of 20,000 silver ingots and hired two chemistry professors to study the ingredients and proportions of the existing 29 popular vermilion ink paste recipes.

In 1941, Zhang met Gao, a young man with the same passion for seal carving and calligraphy, and they worked together to study production techniques.

Through trial and error, Zhang and Gao finally came up with their No. 49 formula from more than 50 new recipes they had tried. It is the official version of Lu’an vermilion ink paste.

It was not for sale though.

The ingredients needed to produce Lu’an vermilion ink paste are simple — castor oil, cinnabar and moxa sticks — but the procedure is by no means easy.

The castor oil is required to be exposed to the sun on the hottest days of the year for at least three years, the longer the better.

“Only the hottest time of the summer can enhance the molecular fission in the oil,” says Chen Biao, director of Lu’an Vermilion Ink Paste Workshop and Cultural Center. He tried different methods to speed the process but none could compare to the traditional method, he says. 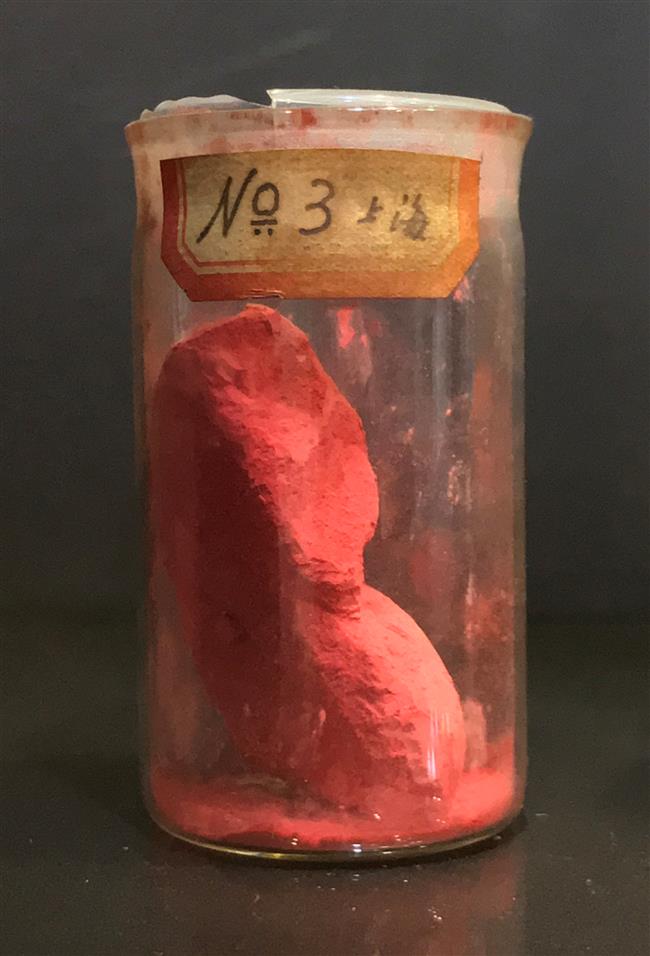 Cinnabar gives the paste its brilliant red color and it is still mined in the old way — workers using drills to split the rocks, carefully selecting the ones with fine and smooth lamination and carrying them on their back down the hill.

There is a quicker way, adopted by many ink paste manufacturers today — using dynamite and transporting the rock pieces on caterpillar tracks. “The problem is that you cannot tell the quality of rock from those broken pieces,” Chen says.

Fine, delicate cinnabar used in Lu’an ink paste is obtained by hours of hand grinding instead of machine work.

Mugwort, from which moxa comes, can be found everywhere, but the mugwort Lu’an ink paste must be grown in Zhangzhou, Fujian Province, at a latitude of 23.5 degrees north. After being dried in the sun until the plant loses its moisture and green color, it is rubbed into moxa sticks as long as 15 centimeters.

Li Yunping, 75, inheritor of the Lu’an ink paste production technique, still remembers the early days when she ventured alone in Fujian’s mountains and farms to find the plant.

Five kilograms of mugwort can produce just 50 grams of moxa sticks, and that includes sticks that don’t reach 15 centimeters and have to be discarded.

“Each time I came back from Fujian, my body was full of mosquito bites. My mum always joked that I looked like a red bean dumpling,” Li recalls.

There is another problem. The soil where mugwort grows can’t be used the next year, so few local farmers like the business. “It didn’t make money as quickly as growing flowers,” Chen says.

After oil and cinnabar powder are mixed using a secret recipe, moxa sticks are added which function as steel bars to bond the other two ingredients and make the red, oily liquid into a muddy substance. 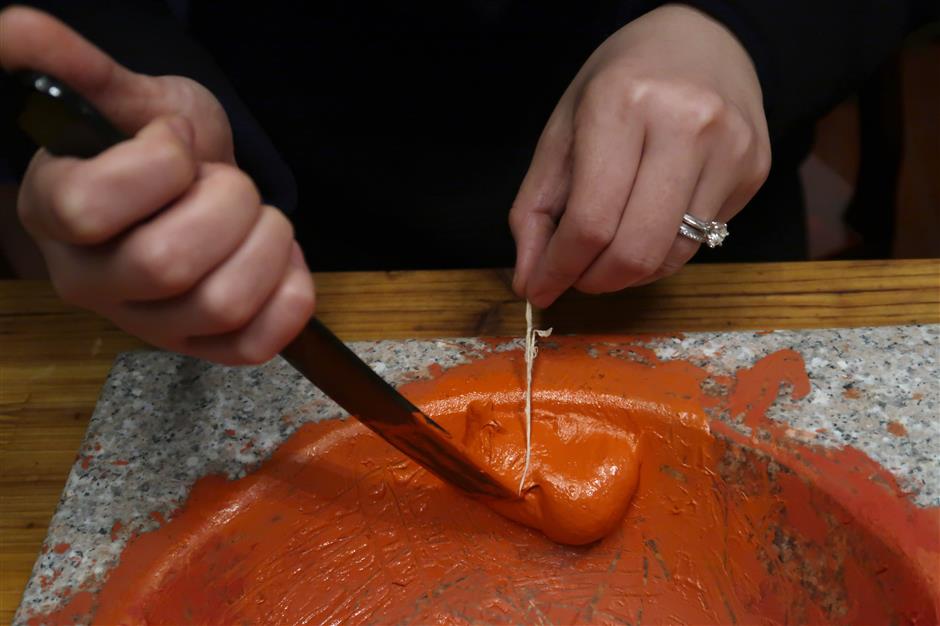 Moxa sticks are added to bond castor oil and cinnabar and make the red, oily liquid into a muddy substance. 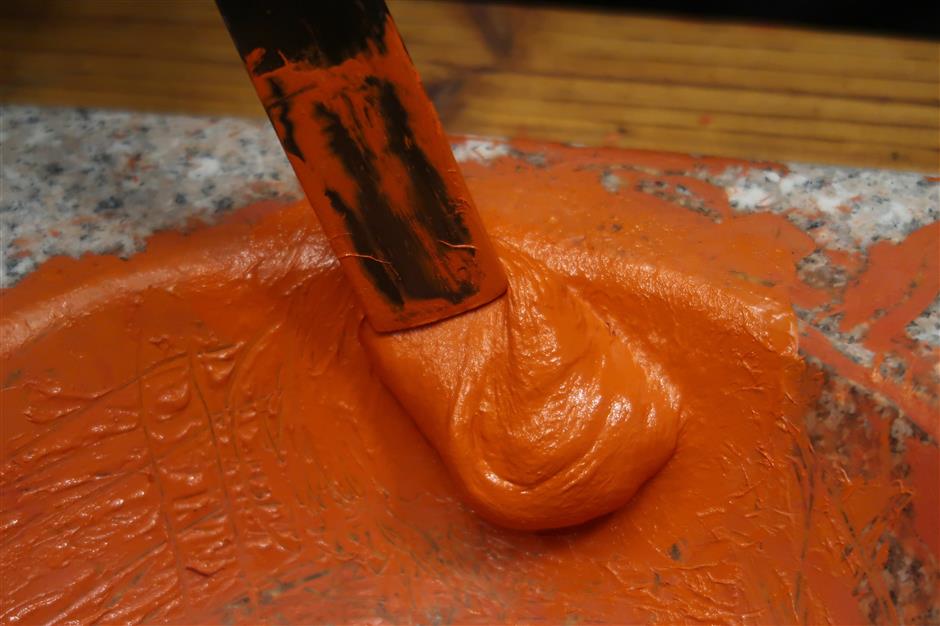 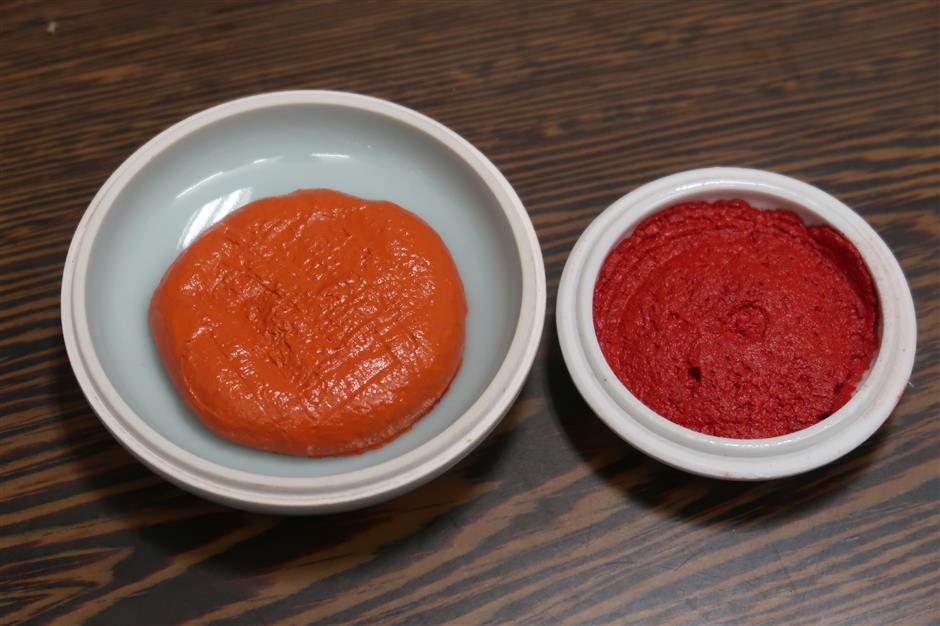 “How to add moxa sticks is probably the most difficult part,” says Chen Yiting, 22, one of the youngest inheritors of the ink paste-making process.

As thin as a thread, moxa sticks should be added one by one into the mixture of oil and cinnabar powder. A small ivory stick is used to stir the mixture.

The stirring method is crucial and must not tangle the moxa sticks or the final result is a coarse paste.

“The stirring part takes time. One hundred grams of ink paste usually takes a day until it gets muddy and sticky,” Chen says. “Oil, cinnabar and moxa sticks are like a family of dad, mom and kid. The moxa plays the role of the kid, who links the parents.”

As it is made by hand, the yearly output of Lu’an ink paste is 5 kilograms at most. “So it cannot be sold in the market,” Chen, the director, notes. “As Zhang and Gao did 60 years ago, we still present the ink paste as gifts to calligraphers and painters today.”

In 2008, the Lu’an ink paste production technique was listed as one of China’s intangible cultural heritage. In 2012, Gao donated the secret formula and a set of Zhang Lu’an’s carving knives he had treasured for 60 years to Jing’an District Culture and History Museum.

In 2013, the Lu’an Vermilion Ink Paste Workshop and Cultural Center opened at 15 Shimen No. 1 Road, just a block from the mbusy Nanjing Road W. The center displays the detailed production steps, tools, ingredients and some 50-year-old ink paste that is still as good as new.

Even at his advanced age, Gao still attends lectures and seminars to promote ink paste skills. Director Chen has written books and set up free courses in primary schools and colleges, teaching students how to make it.

“I’m finally reassured,” Gao says. “The technique is now protected by the government, and I’m so glad to see so many young people are interested in it today. I believe it can be carried forward well by future generations.” 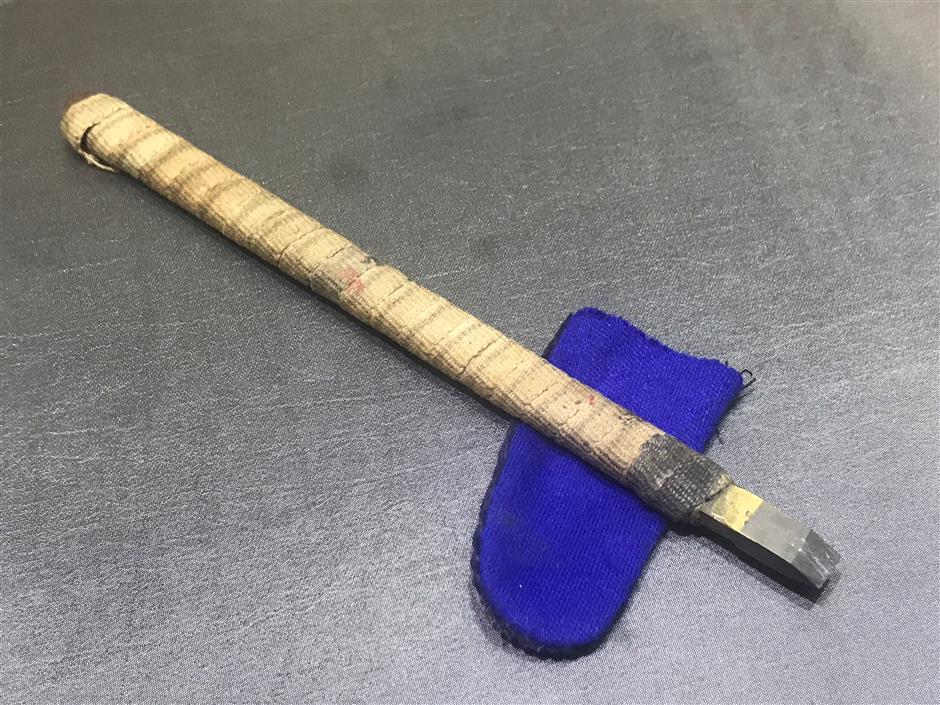 The tool once used by Zhang

A collection of seal-carving works by created by master Zhang