The essence of heaven and Earth 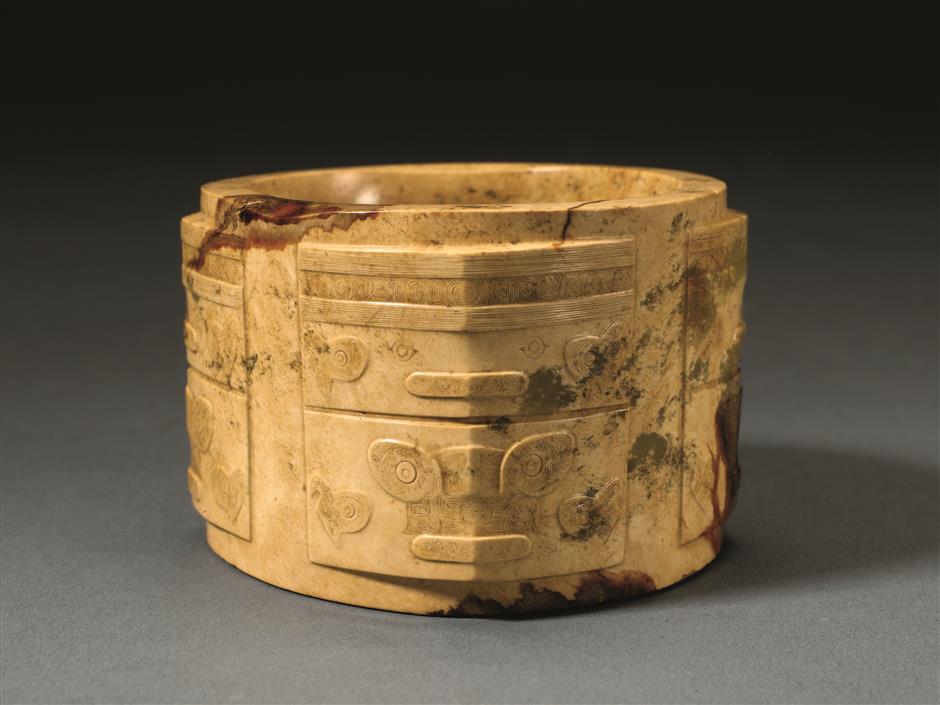 Jade, or yu in Chinese, is considered the essence of heaven and Earth in China. First appearing in the Xinglongwa Culture (6200-5400 BC) in northeastern China, jade has played a significant role in Chinese civilization.

“The history of jade is longer than other traditional artifacts like bronze ware, porcelain and lacquer ware. It embodies the essence of Chinese traditional culture,” says Zhang Wei, a curator at Shanghai Museum.

Unlike today’s definition of jade in mineralogy — metamorphic rocks made up of tiny interlocking mineral crystals — which is further divided into two categories, nephrite and jadeite, the concept of ancient Chinese jade is broader, referring to all the beautiful stones, including agate, turquoise and crystal, which were carved before the Qing Dynasty (1644-1911).

“The mineralogical study of jade was first brought into China in the late 18th century. It started to be recognized by the Chinese experts in the Republic of China (1912-49). The concept of ancient Chinese jade, therefore, is more than its chemical composition and physical structure,” says Zhang.

It is widely known that Hetian jade, a kind of nephrite named after its place of origin in the Xinjiang Uygur Autonomous Region, is better than the jade from other places. Among the various types of Hetian jade, yangzhi (mutton-fat) jade is the most precious, with gentle look, pure color and smooth and “oily” texture.

“The earliest artifacts carved from Hetian jade were excavated from the tomb of Fu Hao, one of the best-preserved from the Shang Dynasty (1600-1046 BC). It was actually not until the Han Dynasty (202 BC-AD 220) that Hetian jade became the major material. Before that, the ancients applied local stones as materials,” says Zhang.

In ancient times, there were mainly two ways of mining Hetian jade. One was by miners climbing Kunlun Mountain and digging in primary deposits. The other way saw miners going to the mid-upper reaches of rivers formed by melted mountain snow and flooding into valleys to find the stones brought along with the water. Miners would just dredge up “jade pebbles” from rivers when the water level dropped. 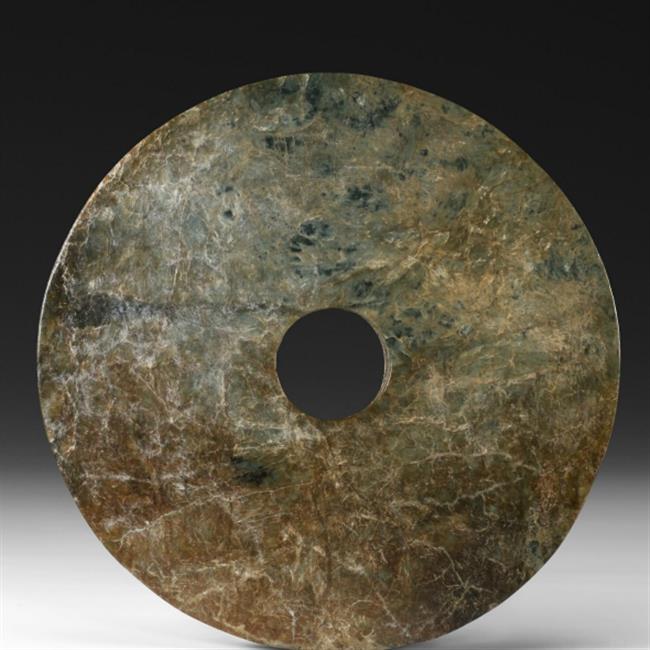 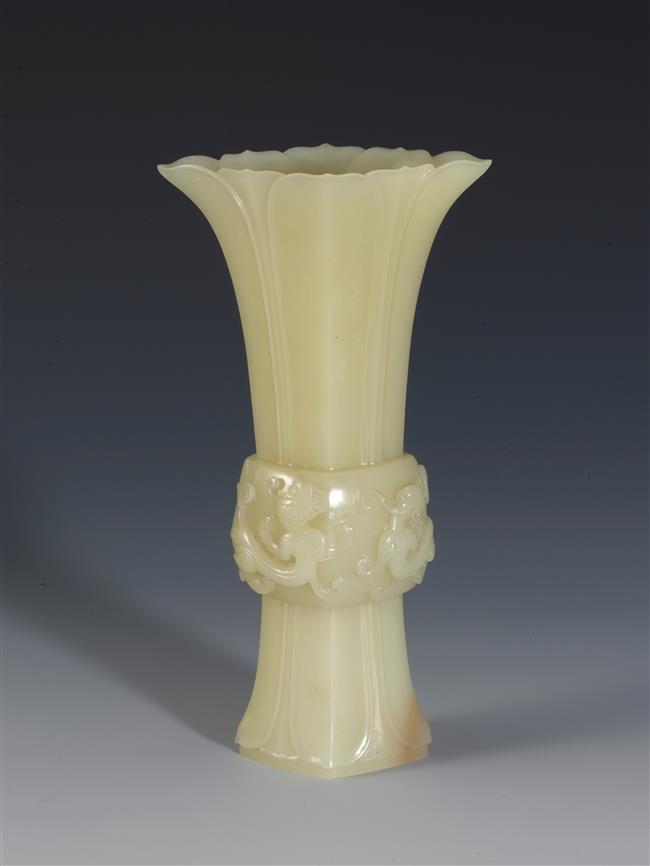 There are several types of ancient Chinese jade.

Before the Shang Dynasty, jade was often used as ritual tools to worship divinity, like bi (disc), cong (tube), gui (blade) and zhang (scepter). It was also a symbol of power and could only be owned by the aristocracy. Jade was made into weapons or tools, such as fu (axe), ge (halberd), dao (knife) and qi (notched axe), which were not practical but symbolic.

Jade was believed to have a function of exorcising evil spirits and thus was turned into burial objects in the Eastern Han Dynasty (AD 25-220), such as jade clothes and wo, han and sai — pieces put in the hands, mouths and noses of the deceased. Wo was often made into the shape of a pig as it was a symbol of wealth, while han was shaped like a cicada as the insect symbolized rebirth and immortality.

With the secularization of jade in the Song Dynasty (960-1279), the mythology faded while its artistry grew. Animals, human figures, mountains and ancient bronze wares were all popular styles at that time.

In the Qing Dynasty, there was a boom in daily utensils made of jade, such as a jade belt hook, cup, bowl, paper weight and brush holder.

“The period covering the late Neolithic Age, the Shang Dynasty, the Eastern Zhou Dynasty (770-256 BC), the Western Han Dynasty (206 BC-AD 24), as well as the Ming (1368-1644) and the Qing dynasties (especially the reign of Emperor Qianlong), are the heyday of jade culture,” says Zhang.

Before the Han Dynasty, the patterns of jade were abstract, such as the grain pattern that was popular during the Warring States Period (453-221 BC) and embodied the ancient expectation of good weather for crops. By the Tang (AD 618-907) and Song dynasties, jade had moved beyond courtly ritual and the motifs became realistic to cater to the public taste. 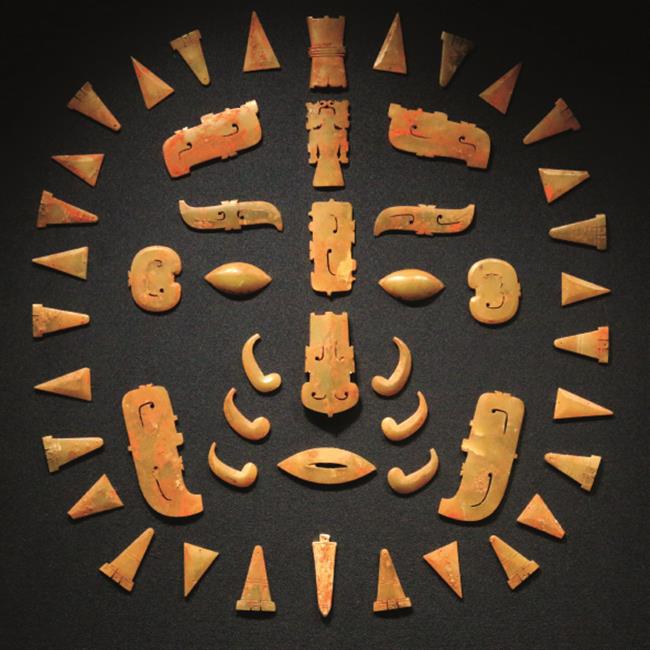 It was a tough job for the ancient craftsmen to carve jade because of the hardness of the material. Jieyusha, the sand of quartzite, garnet and corundum, all harder than jade, was used as a medium to carve jade.

Lu Zigang, one of only a few recorded ancient jade craftsmen in the Ming Dynasty, was known for making jade pendants which had calligraphy on one side and a carved painting on the other. Some were signed Zigang, but their authenticity is doubted by experts.

“We haven’t found any document proving that he made jade pendants. Instead, other jade objects made by him such as vases, stationary accessories and cups were seen in literature,” says Zhang.

The reason why Lu was famous was that he, more than other craftsmen, was an educated man with a certain social status so he was allowed to sign the artworks, which gained popularity among the literati, Zhang added.

Currently, around 20 pieces of ancient Chinese jade artworks collected by the Shanghai Museum are exhibited at the Moscow Kremlin Museum as part of the exhibition “Ming Dynasty: The Radiance of Knowledge,” which runs through July 25.

Evolved from a bracelet, a cong was a ritual vessel thriving in the Liangzhu Culture. It was in a square column shape with a round perforation through the center, indicating the ancient Chinese philosophy — tian yuan di fang (literally “round heaven and square Earth”). This piece was elaborately carved with deity mask pattern on the upper part and a mythological creature mask pattern on the lower part. It is rare that a cong was decorated with birds, symbolizing the messengers of divinity. 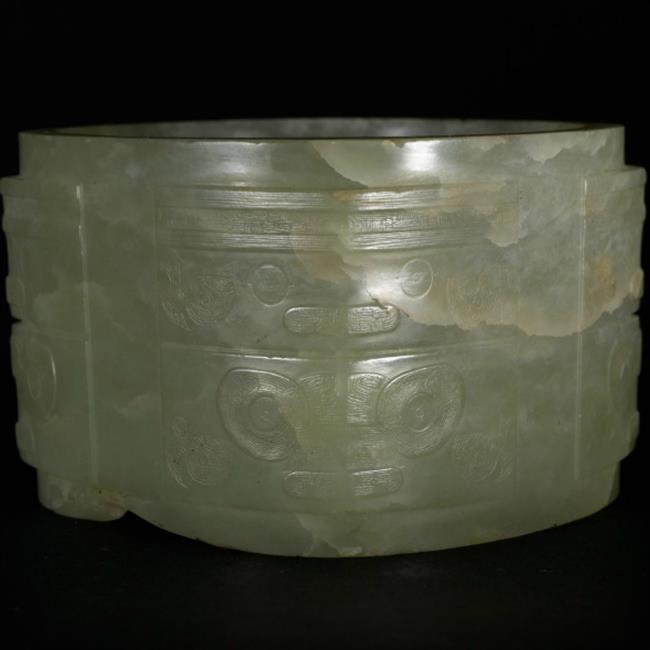 It is so far the only piece of its kind in the world. None of the mystical figures had legs except for this one. Wearing a flat-topped hat and two earrings, with a big nose and hands crossed at the chest, the solemn-looking figure is believed to be a wizard conducting a religious rite. 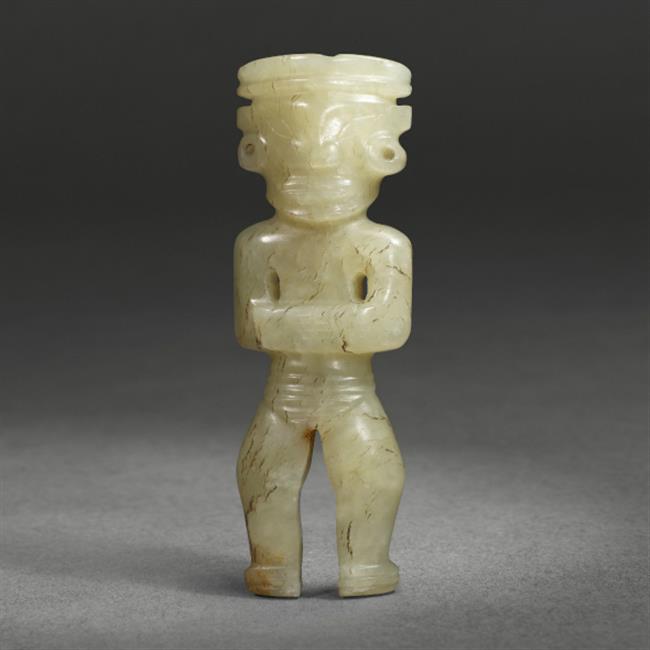