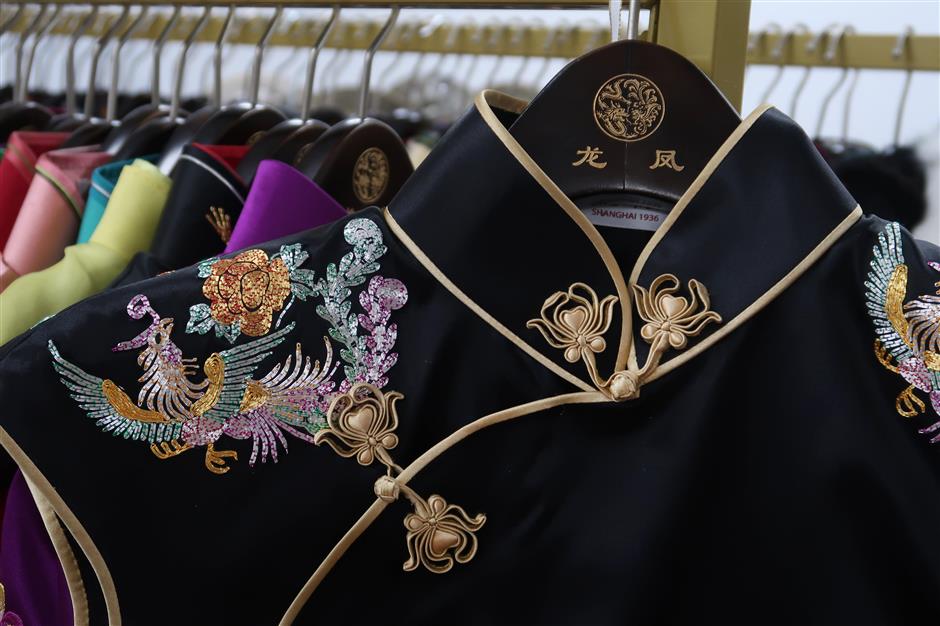 The phoenix, a pattern often found on qipao, also symbolizes the revival of the dress.

Qipao, the traditional Chinese body-hugging dress with high side slits, was the epitome of fashion for socialites in the 1930s. The style is now enjoying a bit of a renaissance at the venerable Long Feng Chinese Clothing Store in Shanghai.

Hidden in the narrow Shaanxi Road N., just a few steps away from the glitzy Plaza 66 housing luxury brands, Long Feng, or “dragon and phoenix,” is not eclipsed by Chanel, Gucci or Prada in the minds of discrete consumers.

Long Feng-tailored qipao, costing anywhere from 4,000 yuan (US$630) to tens of thousands of yuan, have become synonymous with high-quality fabrics, masterful cutting and stitching, and perfect fit. The dresses are made of silk or velvet, and beautifully embroidered with pearls, gold or silver threads, bead work, appliqués and other decoration.

“What makes Long Feng stand out from other qipao makers is that we do it all by hand,” says Jiao Yigang, 58, who has been making qipao at Long Feng since the age of 19.

In 2011, the skills that go into Long Feng qipao-making were listed as part of China’s intangible cultural heritage, and Jiao was honored as a fourth-generation heir to the heritage.

In Long Feng's workshop, tucked away in an old office building on Jiangning Road, Jiao and his colleagues work amid piles of fabric pieces. Even dresses not fully assembled exude the anticipated exquisiteness of shining silks, beautiful embroidery and delicate pankou, or buttons made of thread and copper wire.

“It takes patience and passion,” Jiao says as he carefully stitches decorated long strips in various colors and fabrics to the edge of the dress. The edging makes the dresses durable and irresistibly slinky. 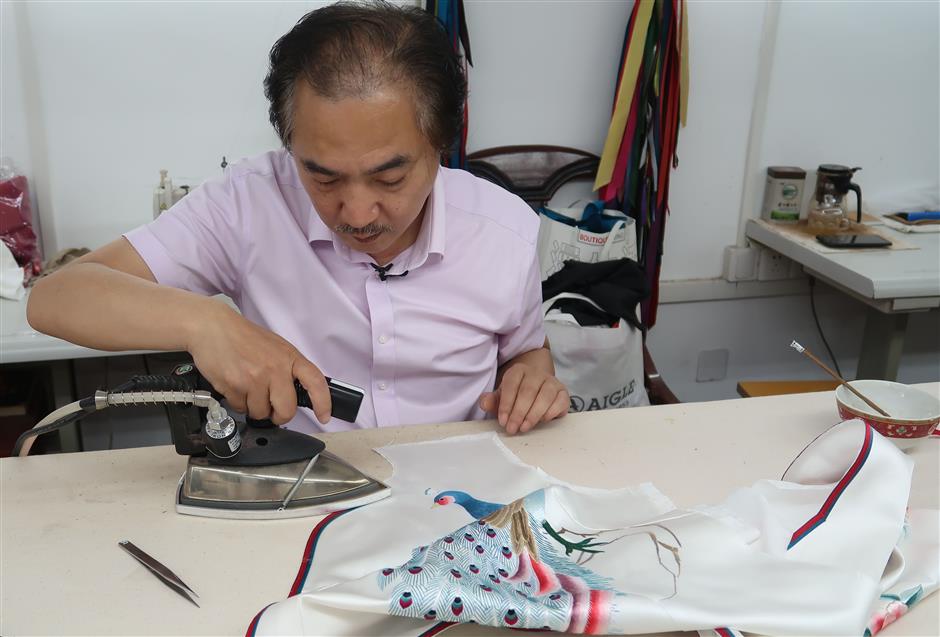 Jiao Yigang, who has been making qipao for nearly 40 years, irons a piece of silk at the Long Feng workshop.

Turning fabric into a beautiful qipao involves many complicated procedures and nine specific hand skills that include edging, inlaying, painting, carving and embroidery.

Painting uses Chinese brush strokes to draw pictures on the fabric, while carving engraves patterns in cloth such as velvet. Skillful, experienced embroiderers sew flowers and auspicious figures on dresses.

“These are the secret of our qipao,” Jiao says.

Every procedure is done by only one tailor, from selecting fabric, taking client measurements, cutting, stitching and the final ironing.

Every step is strictly delineated. An inch of piping requires just nine stitches.

A plain Long Feng qipao needs about 5,000 stitches in all, while a piece with embroidered patterns requires at least 9,000 stitches. “It’s like woman’s second skin, so it has to perfectly fit the body,” Jiao says. “At the same time, the dress has to be comfortable to wear.”

Normally, it takes him about three to four days to complete a dress. One with more complicated patterns can take up to a week or longer.

Jiao’s patrons are brides and their mothers, wealthy ladies, political leaders and celebrities.

“Qipao is increasingly popular in recent years, and our business is thriving,” he says.

The tailor remembers the pivotal moments of the renaissance. It started with the Hong Kong movie “In the Mood for Love,” starring Maggie Cheung, who wore more than 20 stunning Shanghai-style qipao. Then there was the 2001 APEC meeting when 20 heads of state appeared in traditional Chinese jackets or dresses. 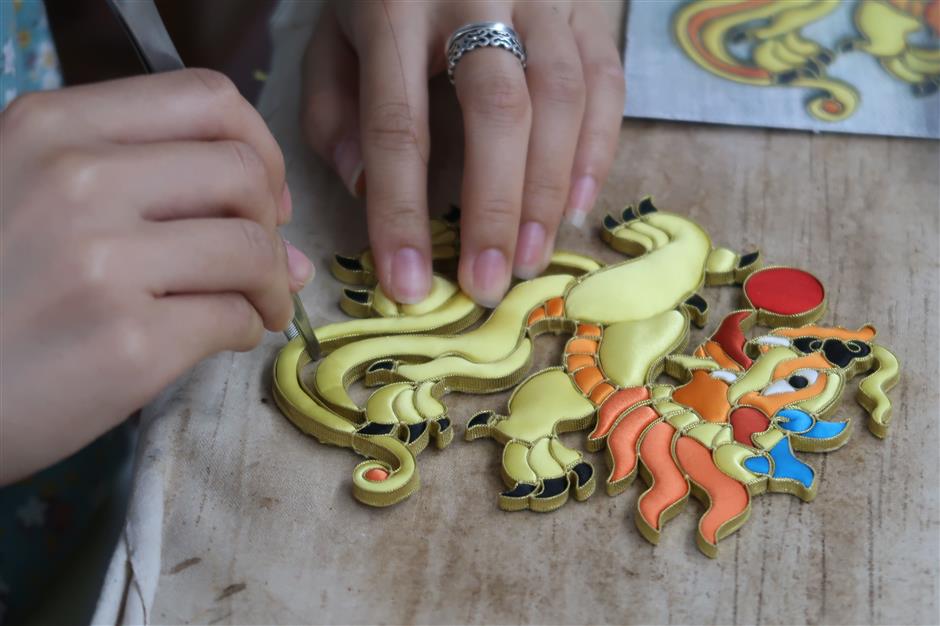 A craftswoman works on a pattern of dragon. 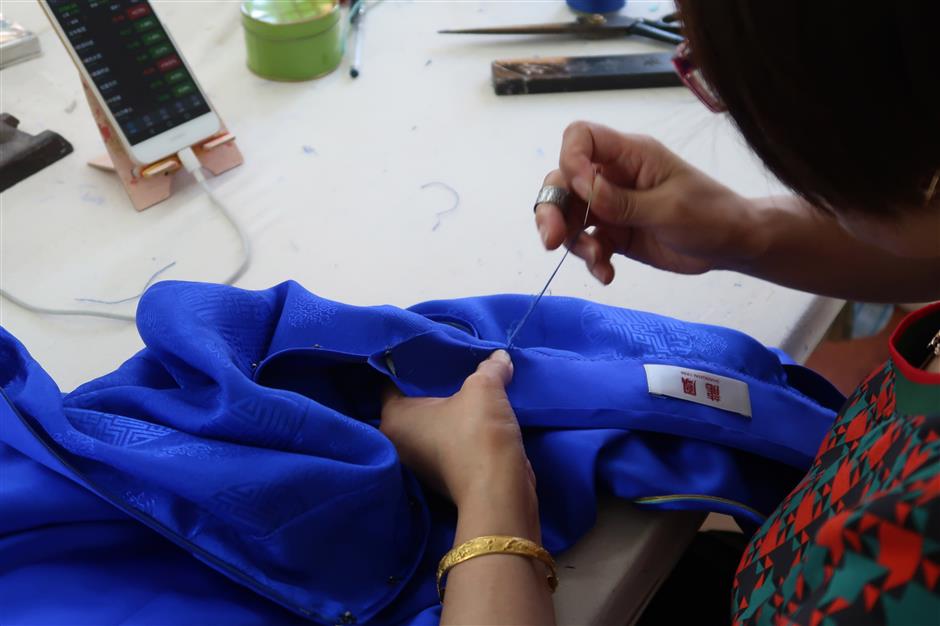 Sewing and needlework are two of the most important skills in fashioning qipao. 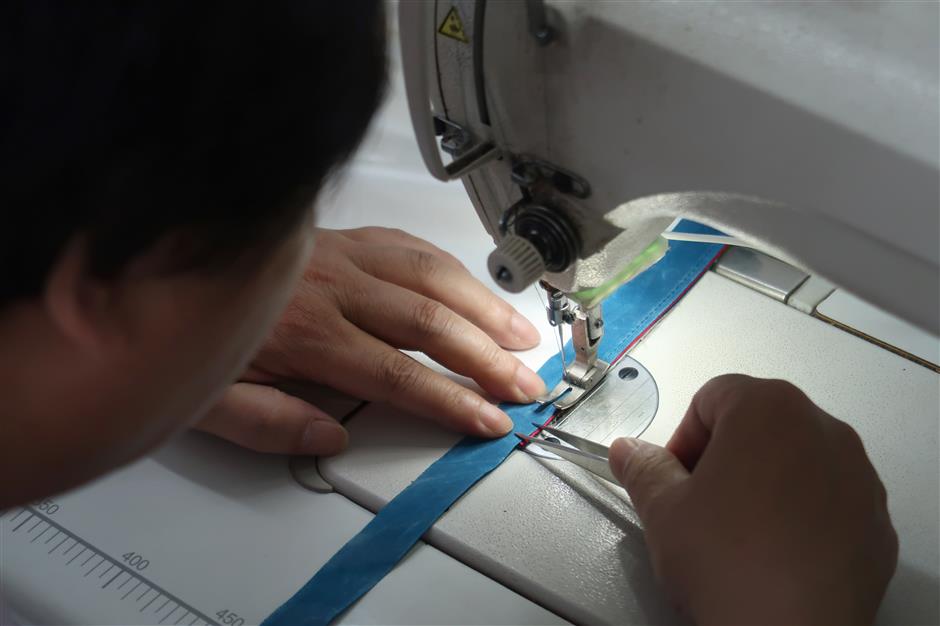 Although Long Feng is widely known for its qipao, the business also makes and sells other traditional Chinese garments.

After 1949 when the People’s Republic of China was founded and public-private joint management was encouraged, Zhu Shunxing merged with three other stores to create Long Feng on Nanjing Road W.

The business was relocated under urban redevelopment to its present site on a street housing several other venerable old Shanghai brands.

“Of all traditional Chinese clothing, only the qipao can compete with Western fashion,” says Gao Peijing, assistant general manager, who has been working in Long Feng for about 10 years. “Long Feng qipao has become the Shanghai-grown luxury fashion brand.”

Fashion trends come and go, but Long Feng has changed little. The prices may be higher than copycat versions, but handmade garments can’t be mass produced. At any rate, the market is limited.

“Few young people are interested in a career in this kind of tailoring,” Gao says. “How we will carry on the tradition is always a concern.”

In 2011, Long Feng tailors set up a qipao course at the Yi Fu Vocational School in an attempt to attract young people to this unique business.

“Every year we get student interns at Long Feng, but few stay,” the manager says. “It’s not a matter of money. It’s a matter of perception. Some regard tailoring as being on par with an office receptionist.” 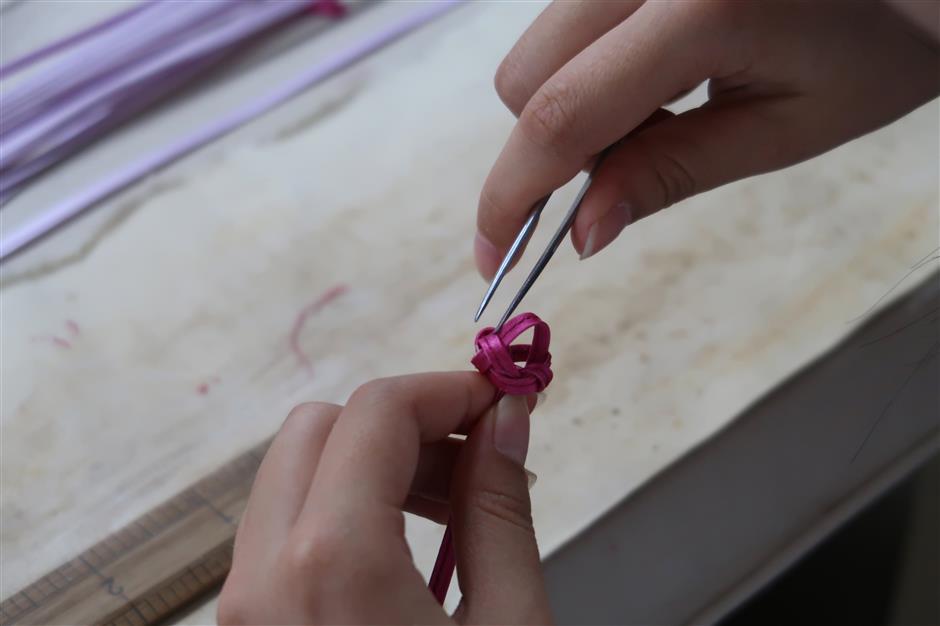 A deft hand crafts pankou, or buttons made of thread and copper wire. 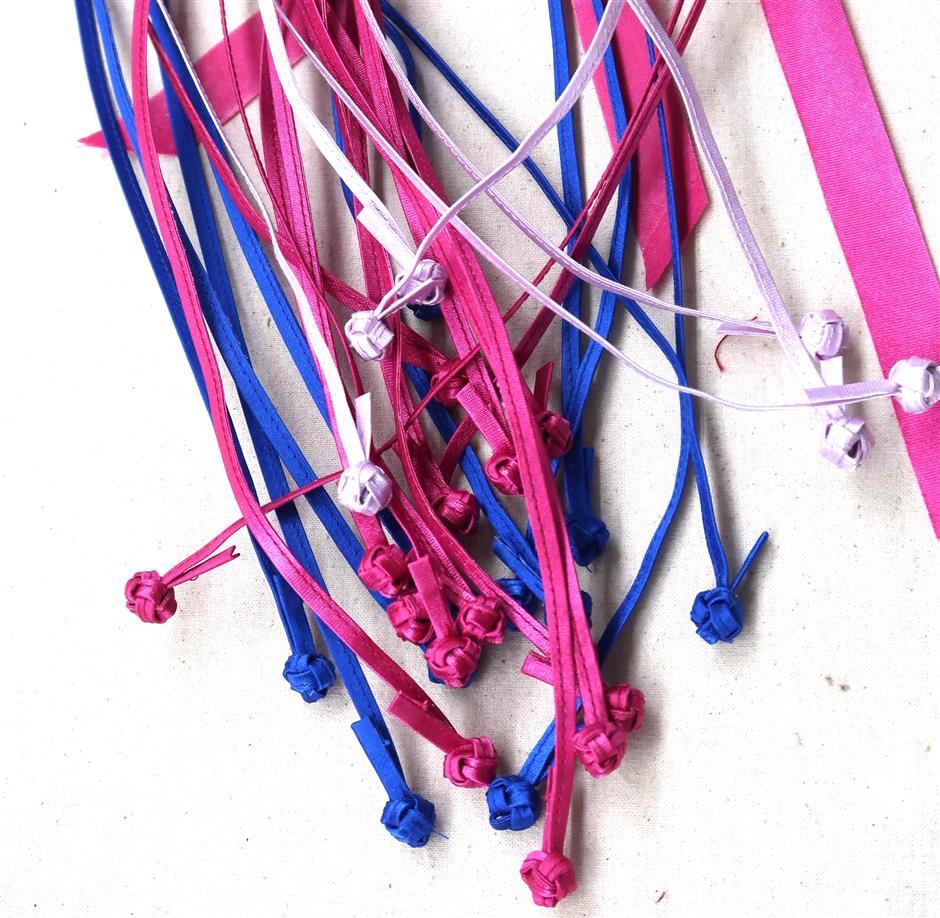 However, that perception is changing as China embarks on a campaign to revive and celebrate the nation’s traditional arts, including skilled handcrafts.

In 2016, two women who graduated from the Yi Fu Vocational School joined the Long Feng as apprentices.

“I do love dealing with needles and threads,” says Wu Yuting, 19, one of the apprentices.

She’s now learning to make the specialty buttons for qipao, and one of the masters is teaching her simple stitch procedures. “I still have a long way to go,” she says.

How fashion comes and goes

In the 1930s, Shanghai women’s fashion was greatly influenced by social trends and Western culture.

There were three major categories.

One of them was students. Their qipao had clean, straight lines and were typically made of cotton. At the time, girls allowed to pursue an education were usually from middle-class families with open-minded parents.

Qipao was the standard uniform for girls in high schools and universities. Because the students had to engage in sports and exercises, their qipao were about 3.3cm shorter than the standard dress. They were not allowed to wear body-hugging qipao.

Then there was the qipao category of dresses worn by dancing queens and celebrities. They were sexy, with more skin exposure. The dresses were tight, fitted at the hip and waist, and the hemline was above the knees.

The third category of qipao were dresses for the rich wives of wealthy, privileged families. Fabric quality and exquisite tailoring were hallmarks of those dresses, which were often embroidered with flowers, butterflies, bamboo or birds and trimmed with gold or silver piping.

Qipao fashion ended in 1949 with the founding of the People’s Republic of China. Social focus turned to revolutionary themes, away from aesthetic pursuits. Women dressed like soldiers in plain, simple clothes. Dull gray shirts and trousers replaced colorful dresses.

In the late 1950s, the qipao was considered a symbol of decadence on China’s mainland.

Gone for almost 30 years, the qipao began re-emerging in the late 1980s, when China opened its doors to the outside world.

In 2004, actress Gong Li walked the red carpet of the 57th Cannes Film Festival in a beautiful qipao dress, putting the style back in the public eye.

Today qipao is more of a formal dress for important occasions, such as weddings or major events and rarely worn as daily clothing.

Numerous qipao clubs and festivals have also sprung up to venerate the cherished old style. 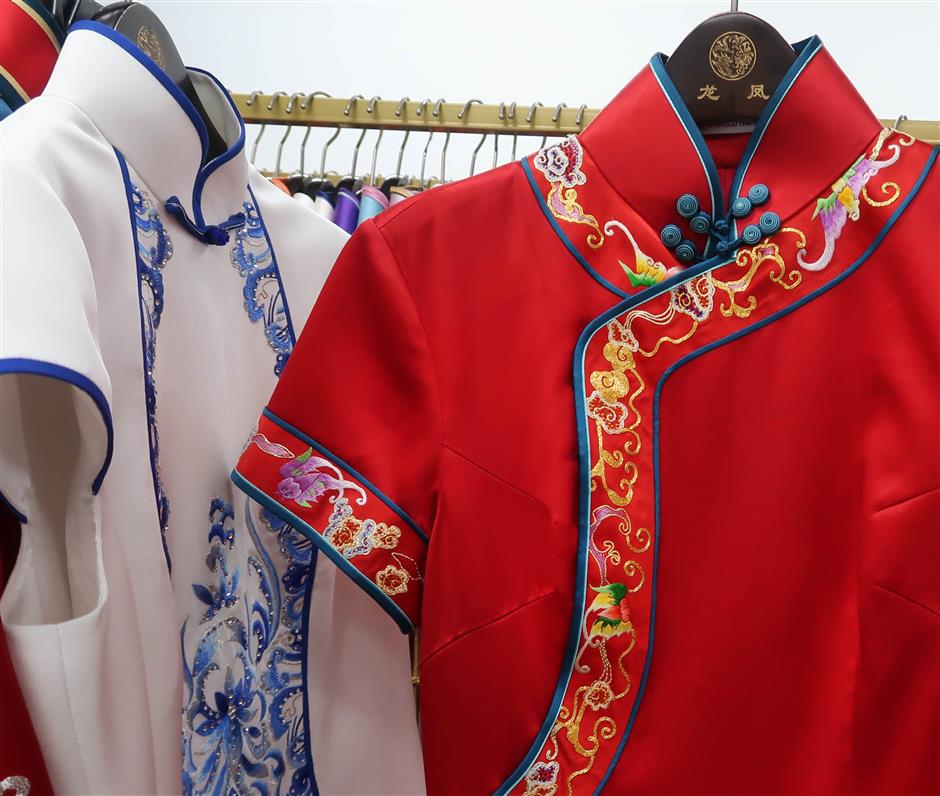 Today, qipao is more of a formal dress for important occasions, such as weddings or major events and rarely worn as daily clothing.