Nuwa mends a hole in the sky

Thanks to Nuwa and Fuxi, mankind’s earliest ancestors in the mythology of ancient China, human beings were created to live happily in the world. However, that peaceful and harmonious life didn’t last long.

Heaven and Earth were in serious disruption on a Winter Solstice eve. Fires blazed out of control, water flooded in great expanses, the Earth trembled and groaned, trees were uprooted and livestock and humans in their millions were submerged instantly.

Nuwa seemed to have foreseen the catastrophes as she was busy collecting calabashes, which later became boats, from all corners of the world. However, no one understood that at the time.

Rushing out of her house, Nuwa stretched out her arms to the sky. A golden calabash fell into her hands. Growing quickly, it was transformed into a magic boat — the flames went out and the ocean waves moved back as they touched it.

Not until all the people, livestock and beasts had climbed into the boat did Nuwa and Fuxi go aboard. 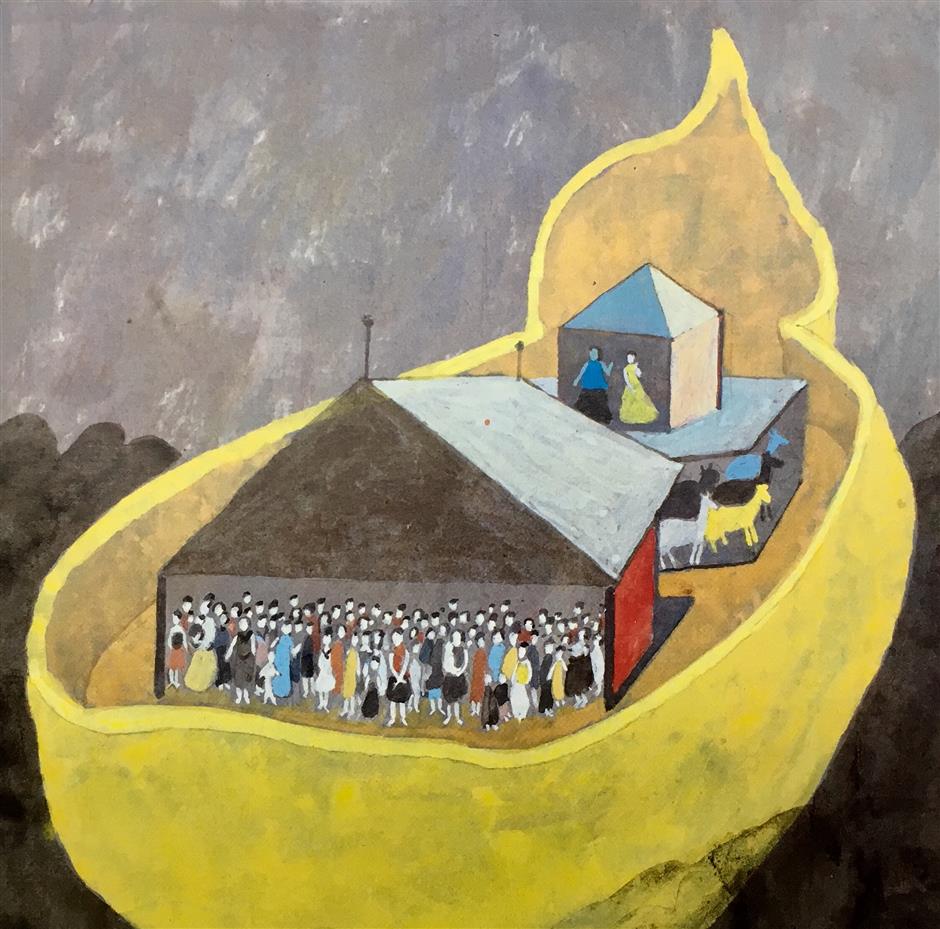 Fuxi and Nuwa didn't board the huge calabash boat until all the people, livestock and beasts jumped into it.

Days later, the rain stopped, the flood receded and the sun finally came out.

“Look,” Fuxi pointed to the northwest sky. After undergoing such a devastating disaster, he looked gaunt.

Nuwa saw a huge hole in the sky. Panicked and fearful, people found that a piece of land had collapsed in the southeast.

The catastrophes were caused by the battle between Zhuanxu, a mythological emperor of the north who was connected with the element of water, and Gonggong, a water god.

Zhuanxu was adjusting the season, which annoyed Gonggong who bumped his head against Mount Buzhou, a pillar holding up the sky.

The pent-up qi, or energy flow, was thus released from the mountain, which caused the collapse of the sky and Earth.

Many tribes reached out to help the people who were greatly afflicted, including those of Shaohao, or Emperor Yan, and his brother, Emperor Huang.

While people were enjoying the food given by the other tribes, Nuwa was staring at the hole and thinking about how to mend the sky.

She went to the beach of the East Sea and bowed down. Suddenly, a giant tortoise appeared along with strong winds whipping up waves. Nuwa jumped on its back and then a big wave pushed them to the west. In the blink of an eye, they arrived at Mount Taihang. 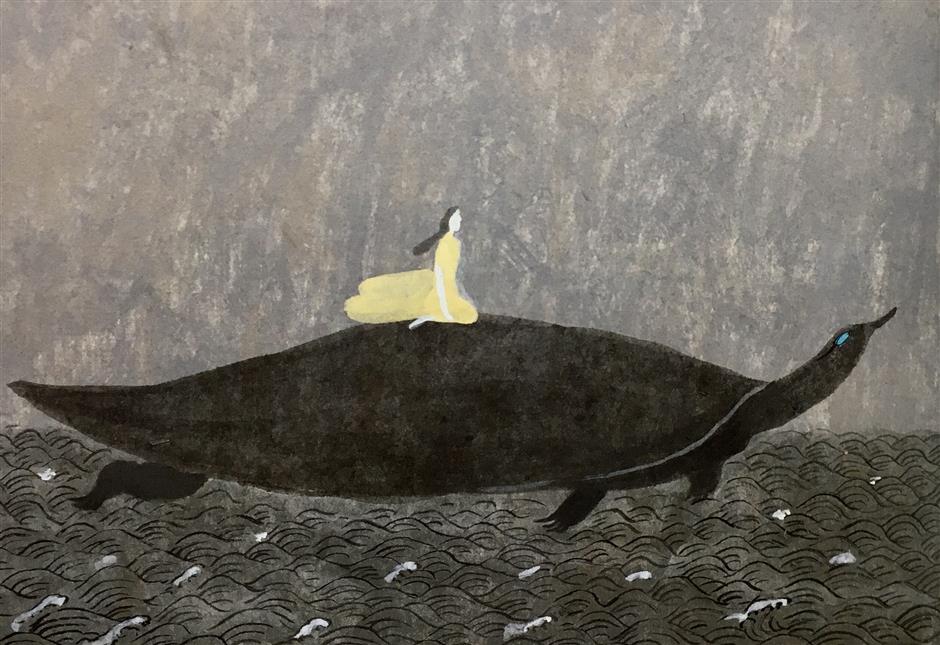 Nuwa sat on the back of a giant tortoise, which then carried her to the west.

“Where is the god of Mount Taihang?” asked Nuwa.

Just then, the clouds scattered, and a pot made of gold and jade appeared. The four deities put the colored stones into the pot. Then, Nuwa set fire to the stones.

After six days, she finally heard the sound of boiling water. However, opening the lid, she found that the colored stones were still separated.

She asked Emperor Huang for a favor. The yellow dragon brought a bag of yellow stones which were poured into the pot. Not long after, the stones of five colors were turned into thick liquid.

Bringing the five-color mixture, Nuwa went to Mount Buzhou where sheer precipices and rubble could be seen everywhere. The huge hole was just hanging over her head.

Nuwa scooped up the thick liquid and said, “Go!” Pushed by winds, the liquid flew to the black hole and covered it. However, the mixture was so heavy that it dripped down gradually. 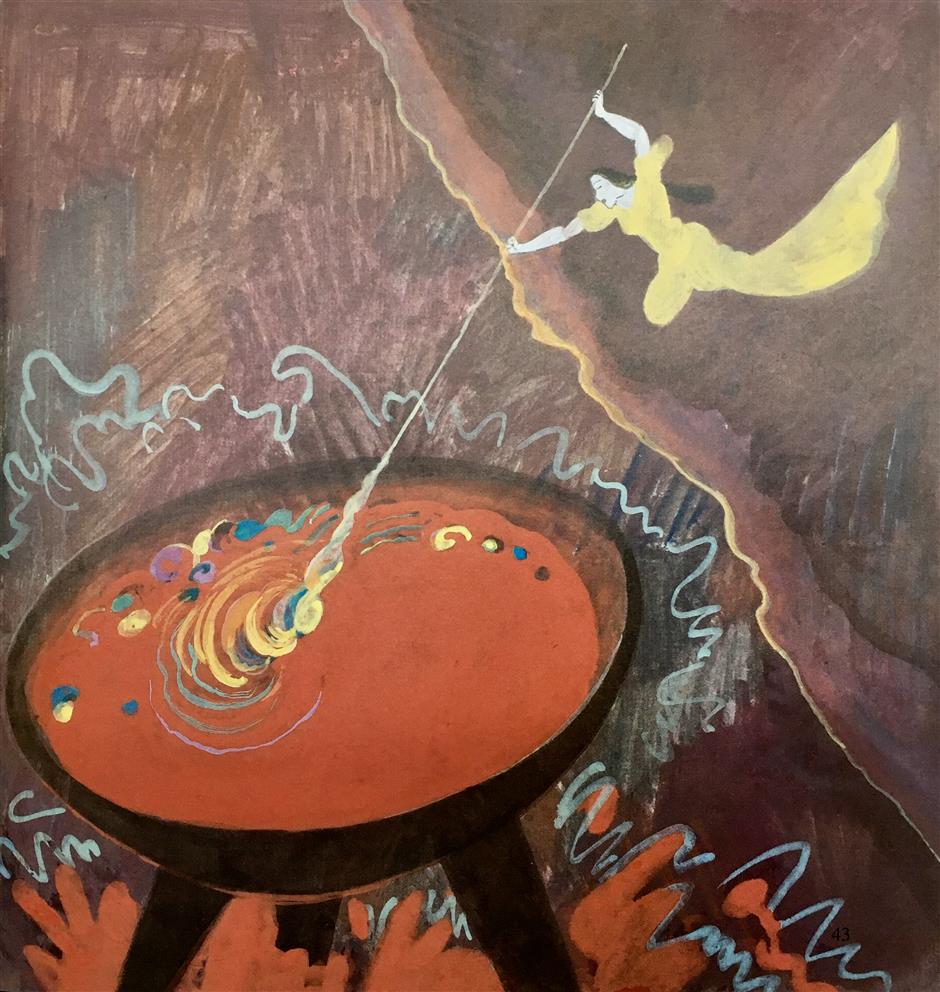 Nuwa stirred up the five-color mixture after yellow stones were poured into the pot. 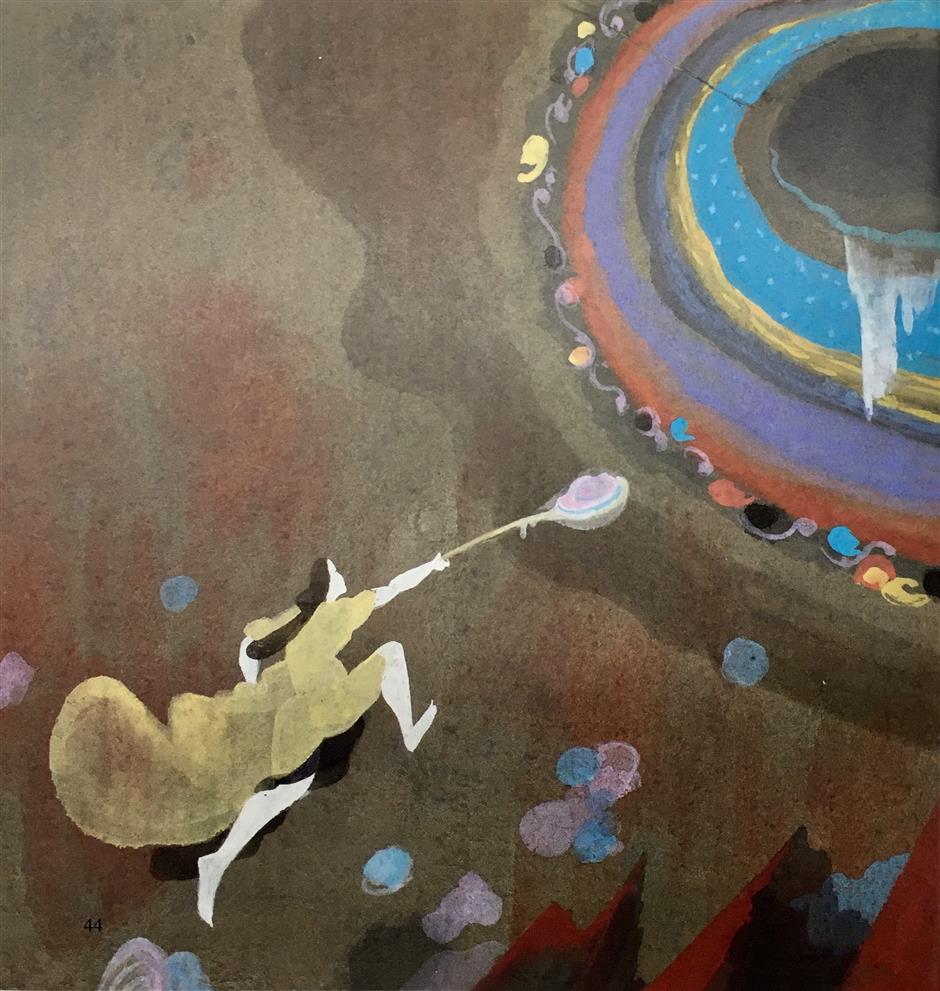 Nuwa scooped up the thick liquid and tried to cover the hole.

A large cloud, sent by the deity Haotian, floated in the valley. Nuwa scooped up the thick liquid again, and this time with the support of the cloud, the mixture successfully covered part of the hole.

With her intensive efforts, the black hole became smaller and smaller. At last, the bright sky reappeared.

Nevertheless, Nuwa still worried that the patched sky might be too low and therefore asked the giant tortoise for a great miracle.

Nuwa pulled out a sword with tears in her eyes and made three deep bows. The tortoise cut off its four legs which the four gods carried in the four directions.

“Grow!” said Nuwa. The four legs got increasingly longer and became four pillars to support the sky. The sun, the moon, the stars, everything went back to their original positions except for the Earth.

It was a black dragon that had made mischief. Nuwa threw a cow as decoy into the abyss. After a while, the evil dragon surfaced and Nuwa shot an arrow toward it. The dragon turned out to be a python.

A large quantity of reeds grew up after the flood. Nuwa ordered people to pile up reeds and burn them to cinders which were used to stop the surging water.

The sky was patched, the pillars were set up, the devil was killed and the flood was drained. Nuwa not only created mankind but also made the world reborn.