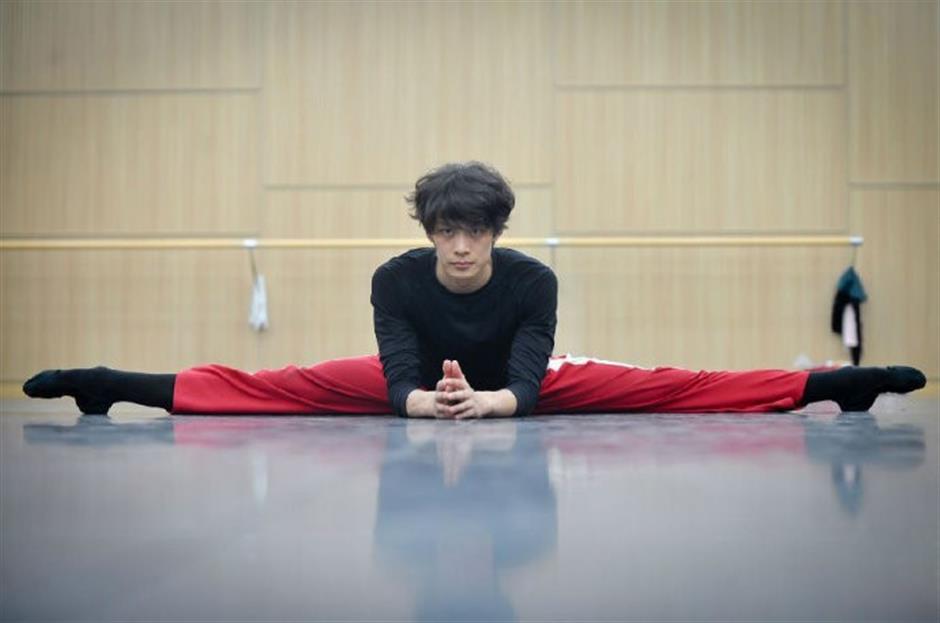 Wu Husheng in a training session.

Wu Husheng was born in Shanghai in May, 1986. Awarded prizes in several domestic and international ballet competitions, Wu has grown into one of the top ballet stars of China. With hard work and constant striving for perfection, he brought numerous impressive characters to the stage.

The young ballet dancer played an important role inheriting ballet from his predecessors and carrying it forward to the new generation. He also works hard to help spread the spirit of Shanghai Ballet and bring Chinese ballet to the world stage.

Along with China’s reform and opening-up, Wu’s graceful moves and performances tell a story about the hopes and dreams of this generation. 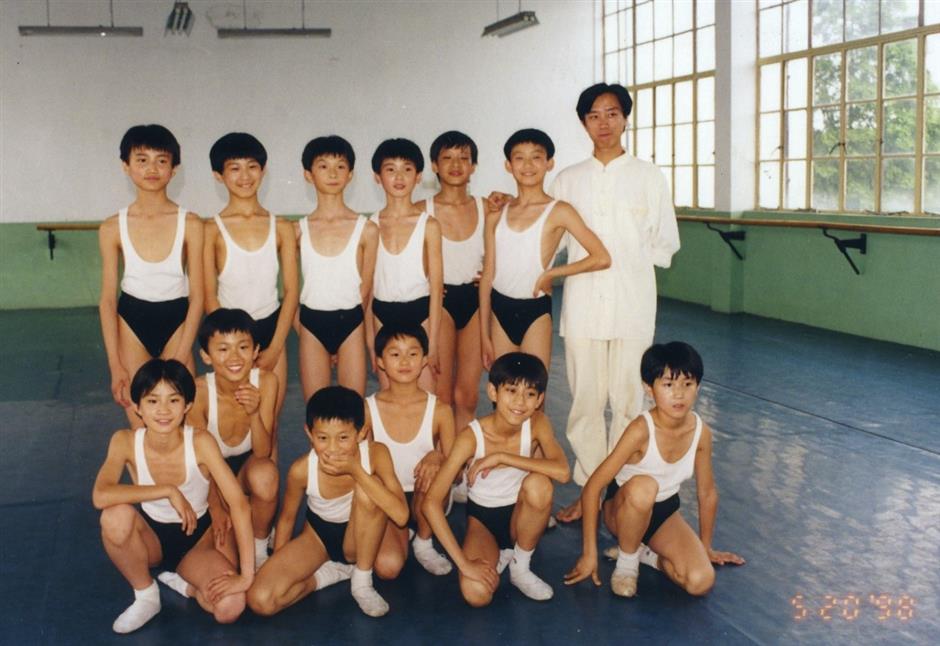 Wu Husheng (fifth left, back row) poses for a group picture when he was admitted to the Shanghai Dance School.

Many people have asked me: If you didn’t do ballet, what would you do? My answer is that I would at least chose work related somehow to ballet. For me, ballet is the most important thing in my life.

My name is Wu Husheng – a man who has been practicing ballet since the age of 10. Now I’m the youngest male principal in the history of Shanghai Ballet.

In 1996, when I was 10 years old, the Shanghai Dance School was recruiting new students and I decided to go try it out. I was lucky that I got chosen – soon after, I began to professionally practice and study ballet.

For many grueling years I woke up early every day, no later than 6am, to practice. If it was raining and I couldn’t go outside, I would climb the stairs as exercise. During evening self-study when the teachers came to check on us, often times I was the only one in the studio. I would always sweat a lot when training in summer, and once I even collapsed and fainted on the ballet bars.

Living in Pudong District at the time, I had to take three different buses to reach the school in Hongqiao area, which usually took around two hours. All the first and second grade students in the academy lived in the dorms. I had no mobile phone, and it was expensive to use a public telephone, so I hardly contacted my parents during that time.

After graduation in 2003, I was enrolled into the Shanghai Ballet as a 17-year-old ballet dancer. I started out as a crowd dancer in “Coppelia,” and gradually made my way to the center of the stage.

I was in “The Nutcracker,” “White Haired Girl,” “In the Mood for Love,” “Swan Lake,” “Coppelia,” and “La Sylphide,” just to name a few, as the male lead. Whether I was on stage or off, I always maintained my passion for ballet. 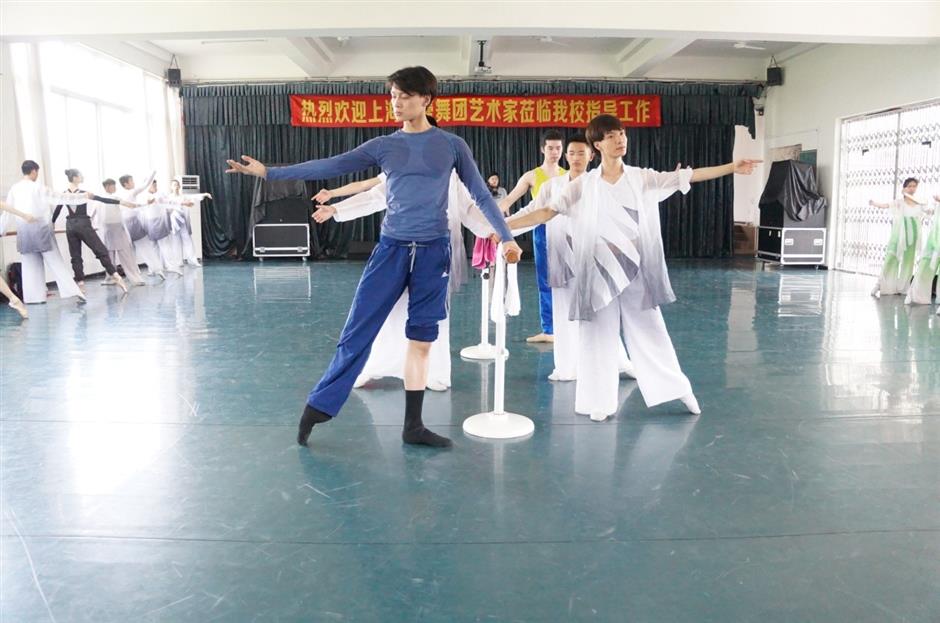 Wu Husheng (in blue) teaches students at a school for the deaf-mute in Sichuan Province.

I have won a series of awards, big and small, among which the one I gained at the New York International Ballet Competition in 2007 remains the most significant to me. In that competition, I staged the modern dances “Webber No.5,” the “Swan Lake” Black Swan duet, and the “Coppelia” wedding duet. I won the Silver Award and the Igor Youskevitch Award, while the Gold Award for male that year stayed vacant.

Along with these honors, I received an invitation from the renowned American Ballet Theater to be a guest dancer there. I rejected with no hesitation because of my emotional bond with Shanghai Ballet.

In addition, I was aware that I might play my part better by staying in Shanghai. There are always pains and struggles in the way of reaching higher goals. Only by grasping opportunities with hard work will one’s dream be realized. I was lucky to be offered good platforms and opportunities.

Now it’s different. Shanghai Ballet has more than a dozen works in the repertoire which can be staged at any time. And we are working on another two new programs this year. 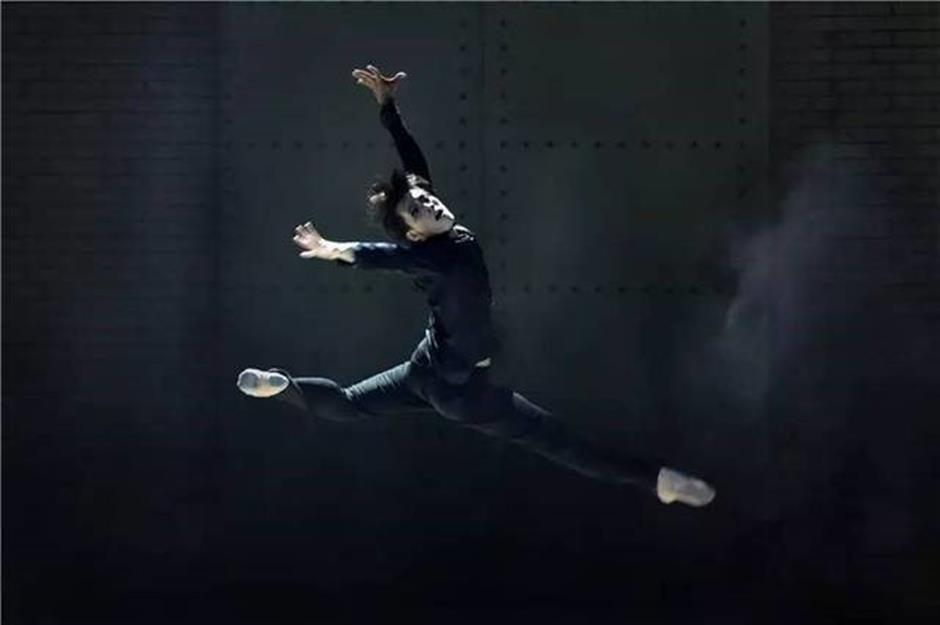 As China keeps opening up to the world, there have been more opportunities for international exchange. We can invite top overseas choreographers to work with us, and we are exposed to more contemporary ballet pieces. We now enjoy a higher starting point and a bigger platform. Also, thanks to the opening-up, we have brought several original Chinese works abroad as well. We are increasingly confident, which is really important.

Yet, we are also faced with more temptation. The world is full of uncertainty, wonder, and possibilities. Practicing ballet with a limited audience is not the only choice available, but I’m always willing to pursue that option. I was offered the chance to film movies and commercials by many companies caught by my physical appearance and fame. But I said no. I am determined to follow Shanghai Ballet and its plans.

I have closely intertwined myself and my future with Shanghai Ballet. I have just entered the real world of ballet, and I am fully aware that there’s still a long way to go. I hope that when people look at me, they see the responsibilities, hopes, and dreams of the generation of post 1985s. We will do what we can for Chinese ballet, and keep the art going in China. It is our responsibility, and our pride.

Ballet perfectly embodies the phrase, “One minute of performance on stage, ten years of hard work off stage”.

Some may say that ballet is a cruel art, but I disagree. While it does have its hard and painful aspects, they are merely part of what this job entails. Ultimately, the mesmerizing beauty that ballet dancers exhibit always makes me proud, and makes all the pain and suffering worth it.

(Iris Chen contributed to this article.)