Legend of the Silkworm God

Silk, first developed in China, is not only a luxurious dress material, but one which has helped connect the nation with other civilizations through the famous Silk Road.

All that was from a small worm tamed by a clever and beautiful woman — Leizu — more than 4,000 years ago.

As the Yellow Emperor led his tribe migrating eastward, they encountered a special village. To avoid conflict, the two sides agreed to meet on a river bank.

The Yellow Emperor and his followers reached the river bank early. They wore brand-new linen clothes, moccasins and jade jewelry.

A breeze stroked the willow by the river. From the village came its female leader Leizu and her people. As they approached, the Yellow Emperor was surprised. 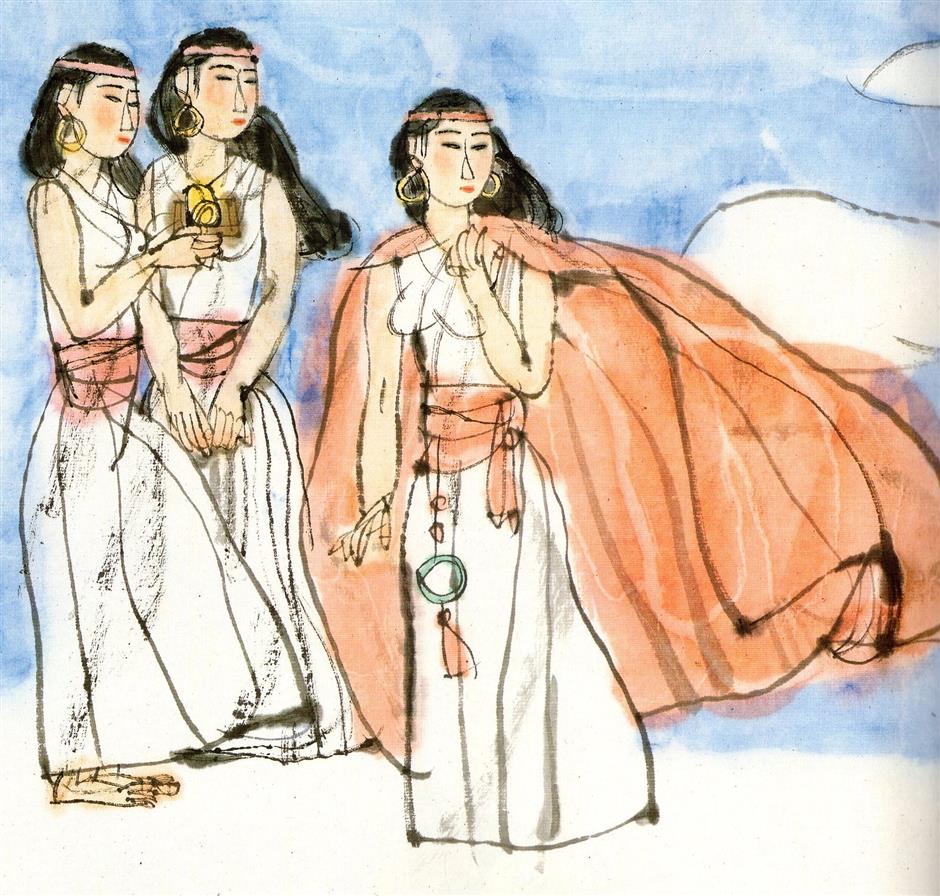 Leizu (right), young and beautiful, wore a dress made of light, soft and fine fabric.

Leizu was young and beautiful, and her dress seemed to be made of a light, soft, smooth and fine fabric which the emperor had never seen before. The dress moved gently in the wind like a thin cloud, making the woman look like a fairy coming from heaven.

Leizu smiled as the Yellow Emperor showed his kindness and sincerity, and she invited his tribe to the village.

There, the emperor found mulberry trees at every thatched cottage, with worms wriggling on the leaves. He was curious. Rather than colorful wild silkworms, the worms on the leaves were white and transparent, spinning silk and weaving thousands of silk webs between branches, some of which had silver cocoons, glittering in the sun.

Leizu took one silkworm on her palm and asked the emperor whether he knew this worm. He said no.

“It is a silkworm, but domesticated,” said Leizu. She picked up a corner piece of her dress and asked whether he knew the cloth. The emperor shook his head again. 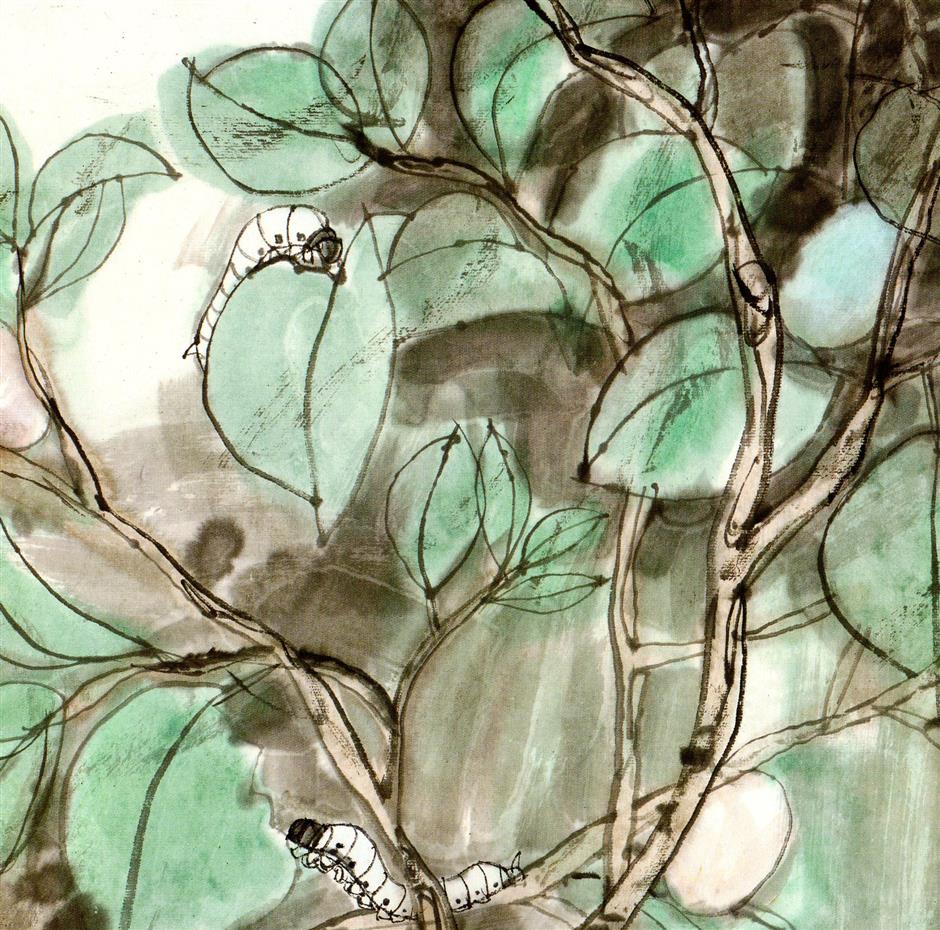 “It is made from cocoon fiber spun by this kind of silkworm, and we call the fiber ‘silk’,” said Leizu.

“Children, present our gifts to our honored guests,” Leizu called out in a clear and loud voice.

With a roll of waist drums, about 100 girls ran out from the woods, each of them dragging two long silk ribbons. They cheered and danced while the colorful silk ribbons glittered in the sunshine.

Then, a girl holding a bundle of light silk ran toward Leizu who took the bundle of silk and shook it. It was a golden cloak. With another shake, the cloak fell over the Yellow Emperor’s shoulders.

Full of admiration for Leizu and her tribe, the emperor sent an envoy the next day to propose to Leizu. The two tribes then merged.

The emperor learned how to raise silkworms from Leizu. They picked mulberry leaves together and looked after the silkworms until they turned into moths flying to the sky. 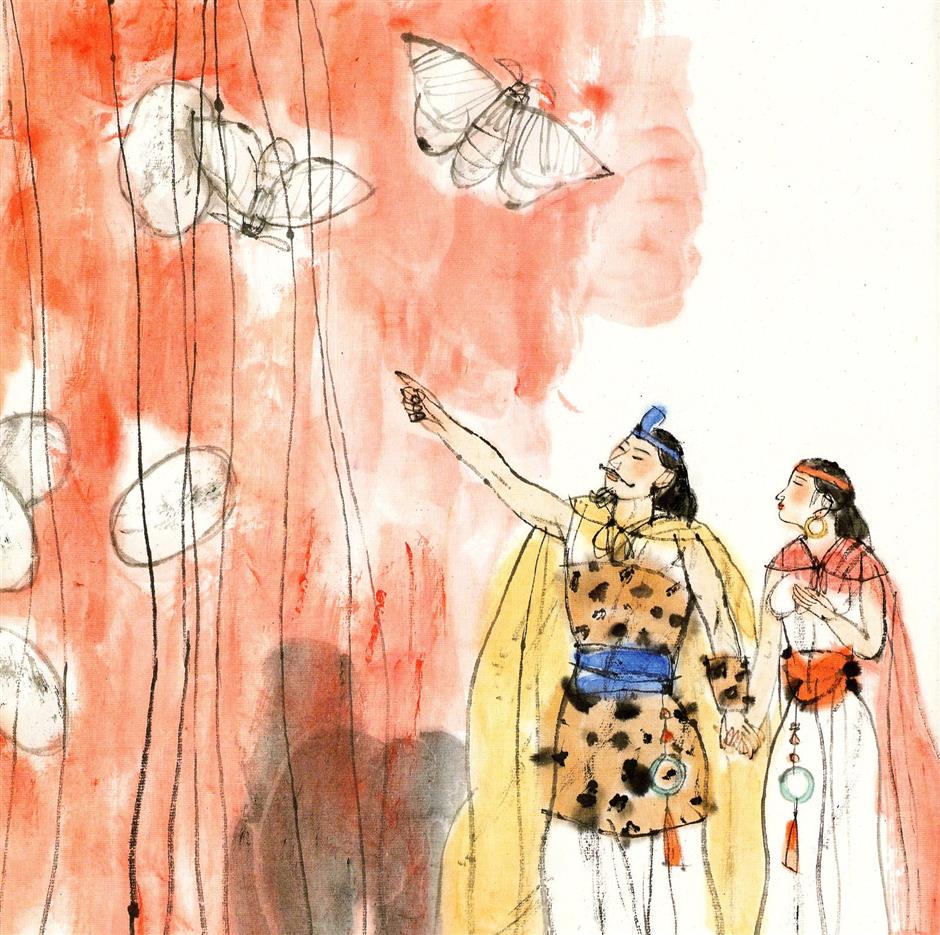 After the Yellow Emperor got married with Leizu, he learned how to raise silkworms from her.

A big pot was set up in the village, and Leizu led her people to boil the cocoons and gather the raw silk which was then woven into beautiful silk cloth.

When she finished weaving, Leizu told the Yellow Emperor the legend of the Silkworm God.

In past ages, there was a beautiful girl in the southwest with a fine male horse.

The girl got worried when her father was out for a long time. She swore to the horse: “If you could take my father back safely, I would marry you.”

The horse neighed and ran off, just as if it understood what she had said. Before long, the horse came back with the girl’s father.

The father was furious when he heard about his daughter’s promise. He shot the horse and pinned its skin on a tree. The girl was inconsolable .

One day, when the girl passed by, the horse skin that hung from the tree wrapped around her. She then turned into a worm whose body was as soft as a woman while its head looked like a horse. It spun and made a huge cocoon on the tree.

That night, the father dreamed that his daughter rode a horse in a cloud and told him she had been nominated as a fairy by the Lord of Heaven for her filial piety. 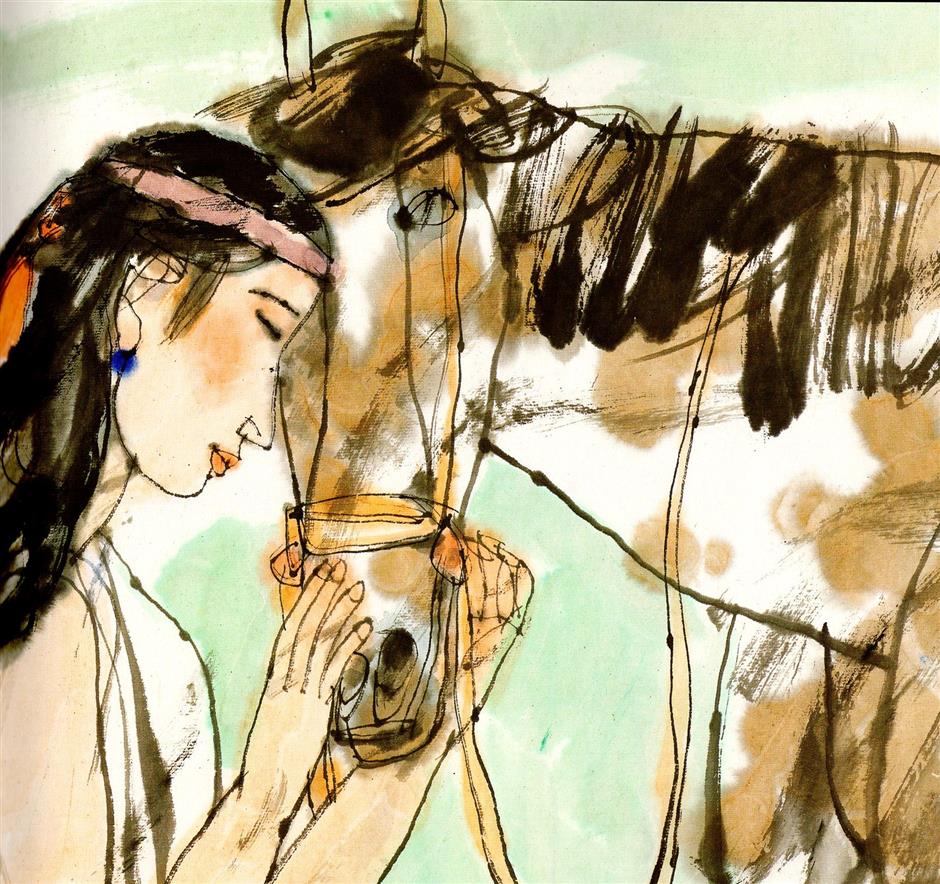 The girl swore to the horse: “If you could take my father back safely, I would marry you.”

People made a statue for her, which was covered in horse skin. They called her “Matou Niang” (literally “woman with a horse head”). She was worshiped by Leizu’s tribe as God of Silkworm.

On the way, Leizu taught people in different regions how to rear silkworms and spin silk. Hence, more and more tribes mastered the process.

Sadly, Leizu died from overwork during the migration. To commemorate her kindness and contribution, people regarded her as “Can Zu” (literally “silkworm ancestor”).

As written in “Shi Ji,” or “Historical Records,” by Sima Qian in the Han Dynasty (206 BC-AD 220), the Yellow Emperor married a girl in Xiling, who was named Leizu, as his queen. But with limited evidence about the exact location, there have been more than a dozen candidate hometowns for the woman in the legend. They include Kaifeng, Xingyang and Xiping in Henan Province, Yichang, Yuan’an, Huanggang and Xishui in Hubei Province, Yanting, Maoxian and Leshan in Sichuan Province, Xiaxian in Shanxi Province, Feixian in Shandong Province and Hangzhou in Zhejiang Province.

Related cultural festivals and commemoration ceremonies are regularly held in these places. 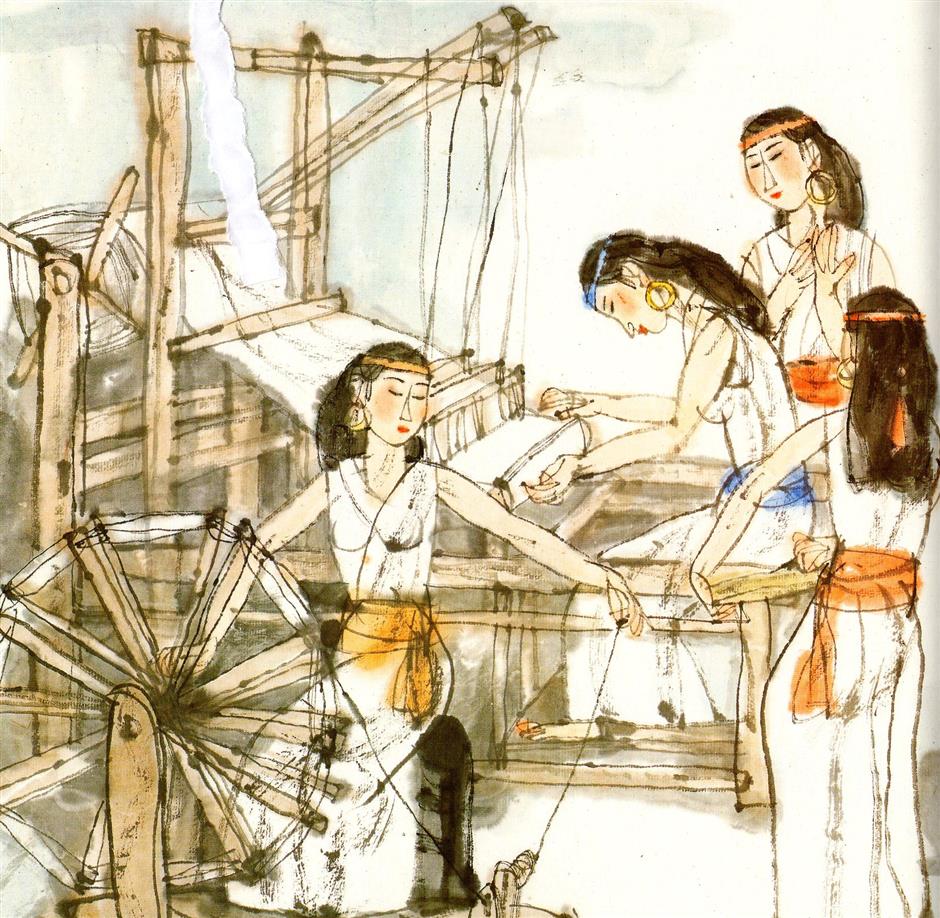 Leizu taught people from various regions how to rear silkworms and spin silk on the way migrating to the east.