Clutching at straws to make a dragon

In rural Shanghai’s Songjiang District, dancers jump, crouch, squat, twist and turn to control the movements of a straw dragon during a local festival.

Fei Tugen stands not far away, enjoying the show. He is the dragon’s creator.

“I made it from the straw of glutinous rice, which is softer than the common kind of straw,” he says. “When the dragon moves, the straw makes its movements flow smoothly and with flexibility.”

The 72-year-old native of Yexie Town in Qingpu is an “inheritor” of the national cultural heritage craft of making straw dragons. He has been doing it for more than 20 years.

The folk dance that accompanies the dragon’s performance can be traced back to the Tang Dynasty (AD 618-907). Legend has it that Han Xiangzi, one of the “eight immortals,” broke a dry spell in Yexie by inviting a blue dragon from the Eastern Sea to come to the town and make rain.

Since then, the village farmers have revered the dragon as a god of water, and they dance every spring to pray for rain and a bumper harvest.

“Only the Yexie dragon is made of straw, making it different from other folk dragons,” Fei says. 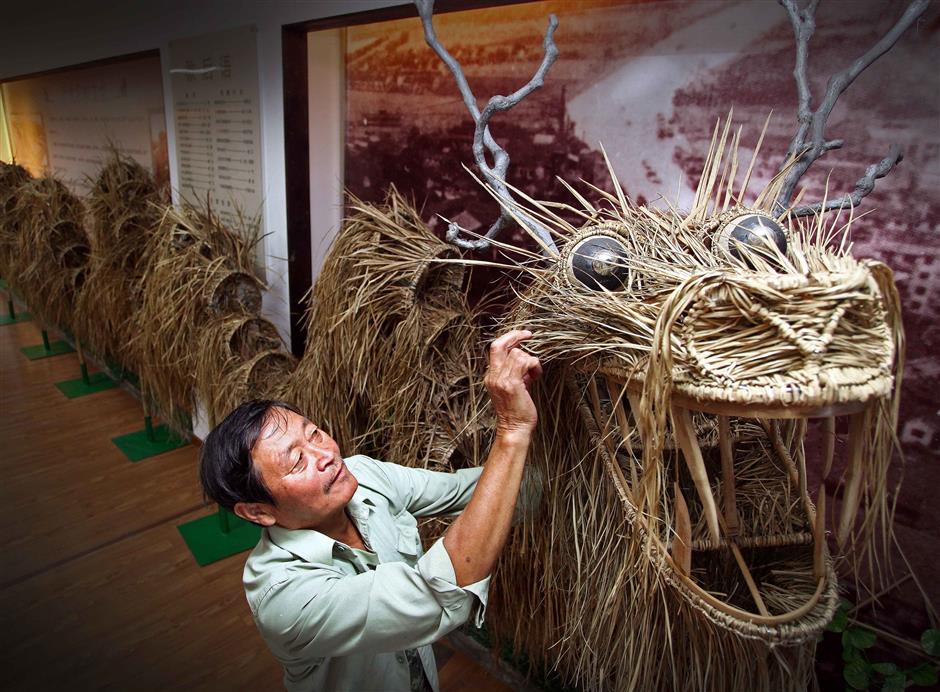 Fei Tugen with one of his creations

Straw was the most common material in the rural village long ago, but now Fei has to order it a year in advance.

The dragon features the head of a bull, the mouth of a tiger, the horns of a deer, the body of a snake, the paws of an eagle and the tail of a fish. Its teeth are made of bamboo, and the tongue is painted blood red.

It takes about one week for Fei to finish the head alone.

“You can’t believe how heavy it is,” he says. “It weighs more than 5 kilograms, and it’s no easy feat to hold it while dancing.”

Fei usually starts with the tail in making a dragon, working his way up the body and neck to the head. Bamboo loops linked by nylon ropes are prepared first to serve as the “skeleton” of the dragon. Straw is then tied to the loops, one by one.

“It’s a job requiring a lot of patience,” he says. “To finish one loop often requires more than 100 pieces of straw and takes about one hour.”

A dragon can be as long as 20 meters, requiring support from nine dancers at 2-meter intervals.

“The tail dancing is as arduous as that of the head,” he says. “If the head moves one step, the tail has to move five steps.”

As a Yexie native, Fei has been watching the dragon dance since he was a boy, though he has seldom danced himself. 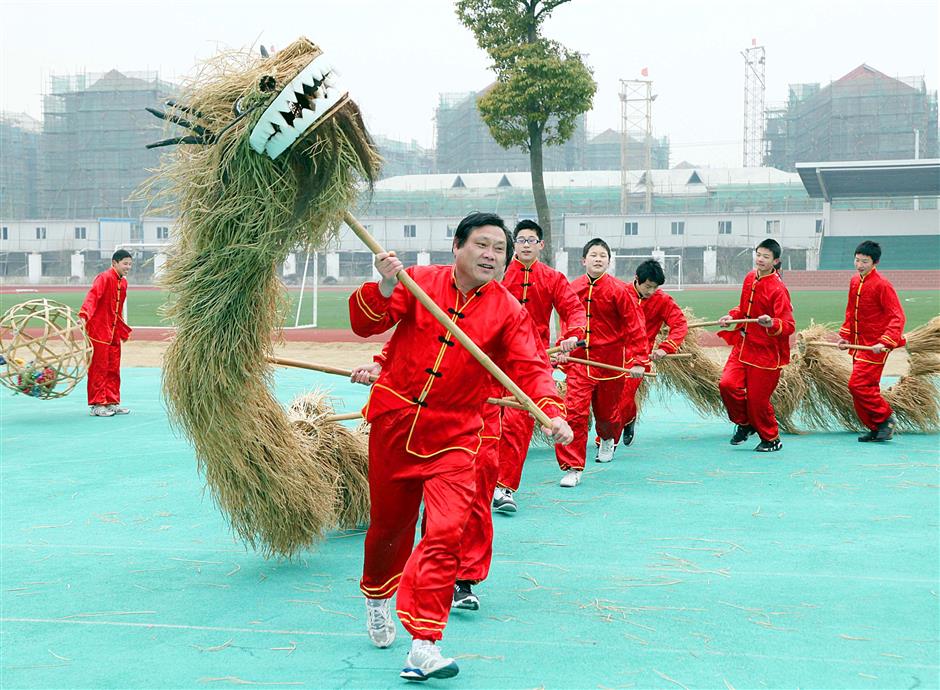 Nowadays in the town, the dance is performed during local festivals and celebrations. The older generation passes the dance movements down to their children so the heritage will not be lost.

In fact, dragon dancing is an optional course in town schools. Every Yexie student can perform a bit. There’s even a school dragon team comprised of two dragons about 20 meters long and eight small dragons that are light enough for one person to carry.

Such is the popularity of dragon dancing that even firefighters practice the folk art when off duty.

Fei is responsible for making the dragons and handling all repair work.

“If it’s an urgent order, I have to work overtime,” he says.

His great skill comes from creative hands. A retired smithy, Fei also makes kites, bamboo wares and cooking utensils. When he was younger, he served in the army team building the railway from Chengdu in Sichuan Province to Kunming in Yunnan Province from 1969 to 1973.

“To be honest, a straw dragon is not difficult to make compared with what I’ve done in the past,” Fei says. “The hardest part is sitting for hours.”

He works on straw creations in the town’s cultural center, which the local government offered to him as a workshop two years ago. He has four students, including one of his sons, who come to the studio every week to learn his skills.

“I required my son to join whether he liked it or not,” Fei says. “So far he is doing quite well.”