Language of footprints in the snow

Chinese is one of the oldest written languages in the world, and its characters are still widely used today.

Many can be easily understood from their shape and associative compounds. They are said to be created by two wise men, inspired by animal footprints in the field, who thus started the history of China in written records.

After the tribes of Yellow Emperor and Yan Emperor merged, other smaller tribes around also yielded to the Yellow Emperor in turn. Yet, how to make sure decrees and orders reached every corner of the territory remained a concern. For that, Yellow Emperor often consulted with two wise men — Cang Jie and Ju Song.

Cang had a broad face and four eyes. He was well read and had an incredible memory. He had his own methods to document events.

He kept a huge collection of ropes, on which large and small knots were made as record of different events. By feeling the knots with his hands, Cang could recall a particular event in its entirety. 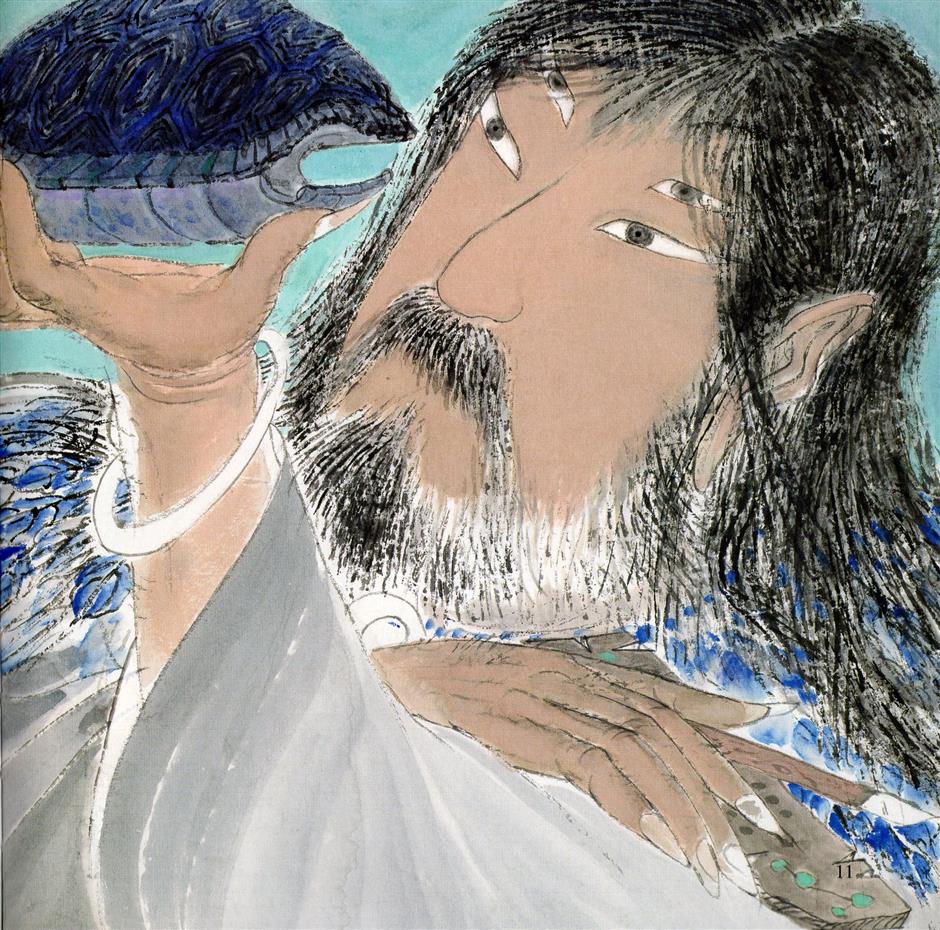 Cang Jie had a broad face and four eyes. He was well read and had an incredible memory.

Cang and Ju also kept records by carving. They carved scenes from various events on stone walls or pottery. The carving not only helped them remember particular event, but also had a decorative purpose.

The two wise men also invented wood-carved credentials. One pattern was carved on two pieces of bamboo. The emperor and his assistants stationed elsewhere each kept half of the piece. A messenger would be sent together with the emperor’s message and the half bamboo piece. Matching pieces would confirm the messenger’s identity.

One day, Yellow Emperor summoned Cang to discuss an incident. Cang took out a rope only to find it rotten, which made it impossible for him to recall the details of the event. He turned to a ceramic pot, yet found it also difficult to read as it had been carved by Ju rather than himself.

Yellow Emperor stood up and said: “The knot-tying record is only legible to those who make it, and the ropes wear out. The carving and inscription record is also flawed for it is legible to few, and incapable of recording large volumes of content. You need to come up with something better.”

Cang contemplated over the matter for days and nights.

On the morning after a huge fall of snow, he left home to discuss possible new methods with Ju. He saw the entire Earth covered in white and heard hunters talking about footprints in the snow.

“Look, a few deer just passed here,” said a hunter pointing at a series of footprints.

“This bear has a wounded paw. It couldn’t have gone far,” said another after checking some deep and shallow footprints.

Cang started to observe the animal tracks carefully. He noticed that the prints left by birds and beasts in the snow could help distinguish what animal had passed by. Thus, probably set shapes or patterns could be used to represent something. 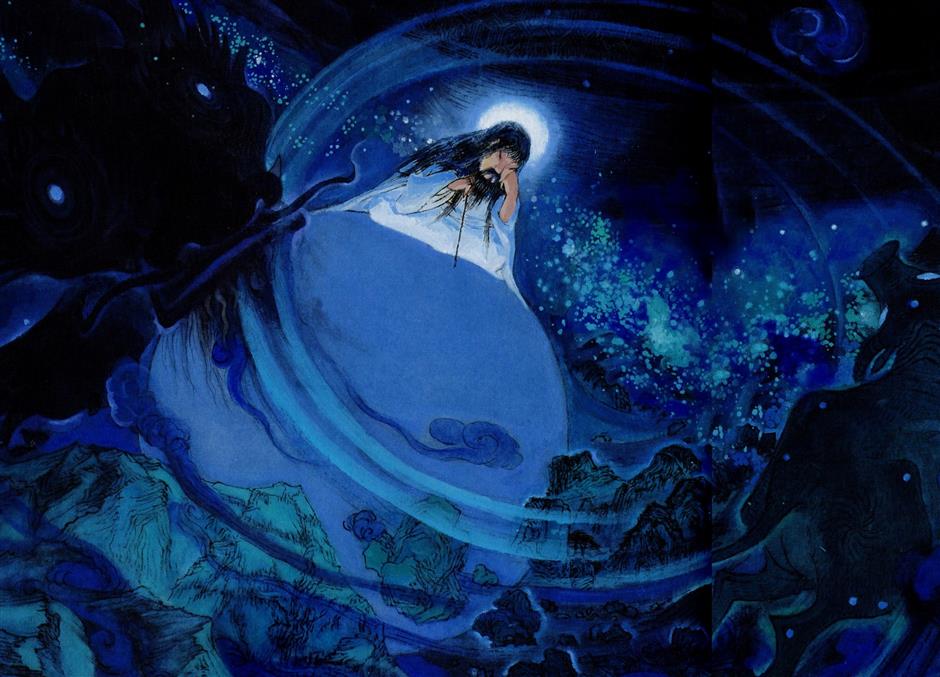 Cang Jie thought about “The Philosophy of the Yi” that Yellow Emperor dictated to the people.

He picked a tree branch and drew on the snow-covered ground. He first sketched a deer, a bear and a pheasant to represent the fact that he had encountered these animals, but dismissed the method for being too complicated.

He pondered until his body was covered all over in snow. He recalled “The Philosophy of the Yi” that Yellow Emperor dictated to his people. Everything that happened in the world could be explained by the concept of the 64 hexagrams. It was derived from the Eight Diagrams created by Taihao Fuxi, the first man in the world, and deduced into various complex concepts.

But, how to handle complicated things by simple rules?

“Duh, players can’t see most of the game,” Cang was suddenly enlightened, “simplify and then simplify again …”

He started to sketch again in the snow. He drew a circle with a dot in the middle to represent the sun, a crescent with a vertical line in the middle as the moon, and three curvy lines for water.

All the wooden patterns, ceramic patterns and carvings on stones all flashed in his mind. He kept sketching numerous patterns on the ground.

Finally, he drew a curve and a dash supporting each other. That is humans!

Just then, the snow stopped. The sun shone brightly and majestically. The simple traces and marks seemed to be animated, sparkling in the snow.

Cang ran to Ju and told him about his discovery. They decided to select inscriptions and carvings by different tribes that shared similarities, which represented a “symbol” that could be generally understood by everyone. Based on that, they created a whole set of symbols to document events and speeches.

Wen (文) refers to the symbols that were created according to items' shapes, similar to a pictograph; while zi (字) refers to characters that are self-explanatory, associative compounds and onomatopoeia.

Yellow Emperor summoned his ministers when Cang and Ju reported on their character system.

Cang said: “As long as we confirm our characters, we can document and record our history.”

Yellow Emperor exclaimed: “Only the language of humans can explain the heart of heaven and Earth!” 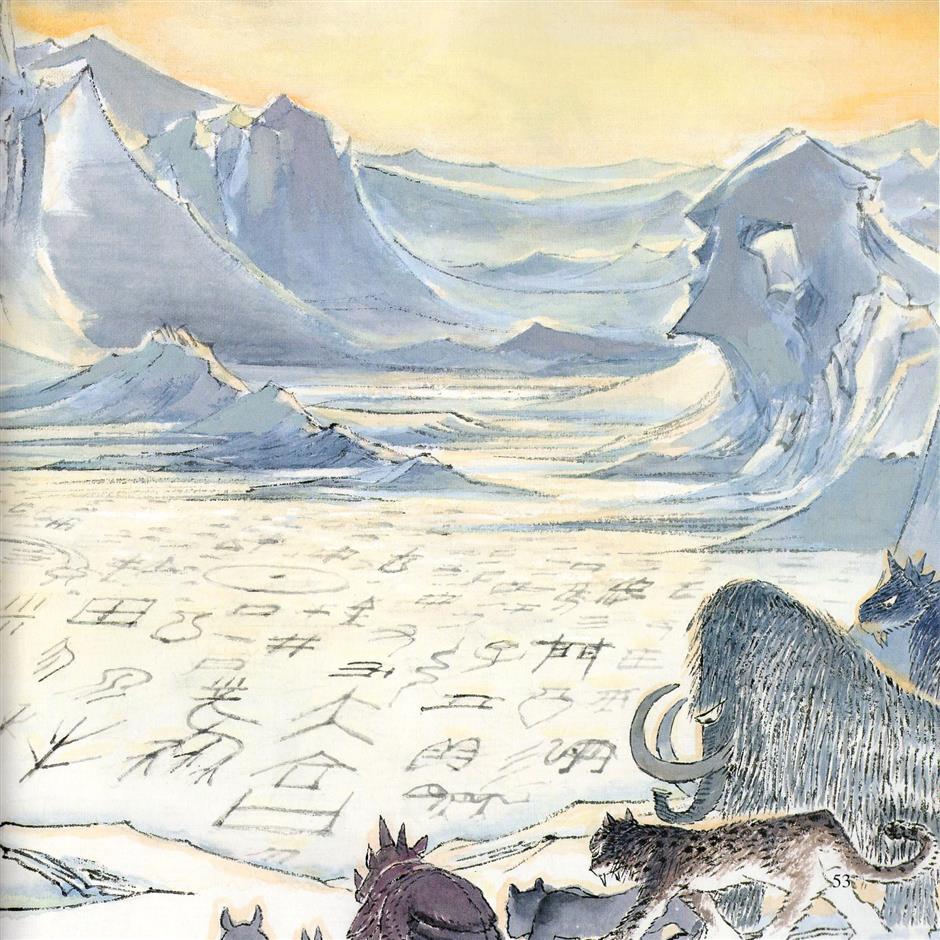 To people’s applause, a storm of golden millet fell from the sky. The people extended their hands to receive the gift from heaven.

Yellow Emperor held the hands of Cang and Ju, looked up to heaven and exclaimed: “Cang Jie invented Chinese characters, which moved the heaven and Earth.”

Symbolic text which helps ancient people record events has a history of more than 8,000 years in China, with evidence discovered from the Jiahu Culture of Henan Province.

Cang, though widely acknowledged as the man who invented written Chinese, is more likely to have been the one who collected and organized pattern characters used by different people, and created systematic Chinese characters.

Jiaguwen (甲骨文), inscriptions on bones or tortoise shells of the Shang Dynasty (16th-11th century BC) discovered in the late 18th century, are said to be the earliest mature systematic written language so far discovered.

More than 3,000 different characters have been discovered on the shells and bones including nouns, pronouns, verbs, auxiliary verbs and adjectives. Some of them composed a nearly 200-word narration. Scholars believe that the inscriptions of the Shang Dynasty are not an initial stage of Chinese characters, but from a relatively mature period after long development.

Most of the characters survived thousands of years, and are still used today, though written differently. That includes jinwen (inscriptions on ancient bronze objects) used in the early Zhou Dynasty (11th century-256 BC), dazhuan (large seal style) popular from the late Zhou Dynasty to the Warring States Period (476-221BC), xiaozhuan (small seal style) as the official writing of the Qin Kingdom in the Warring States Period and the Qin Dynasty (221-207 BC), lishu (official script) widely used in the Han Dynasty (206 BC-AD 220), as well as the regular style, cursive handwriting developed later based on lishu.