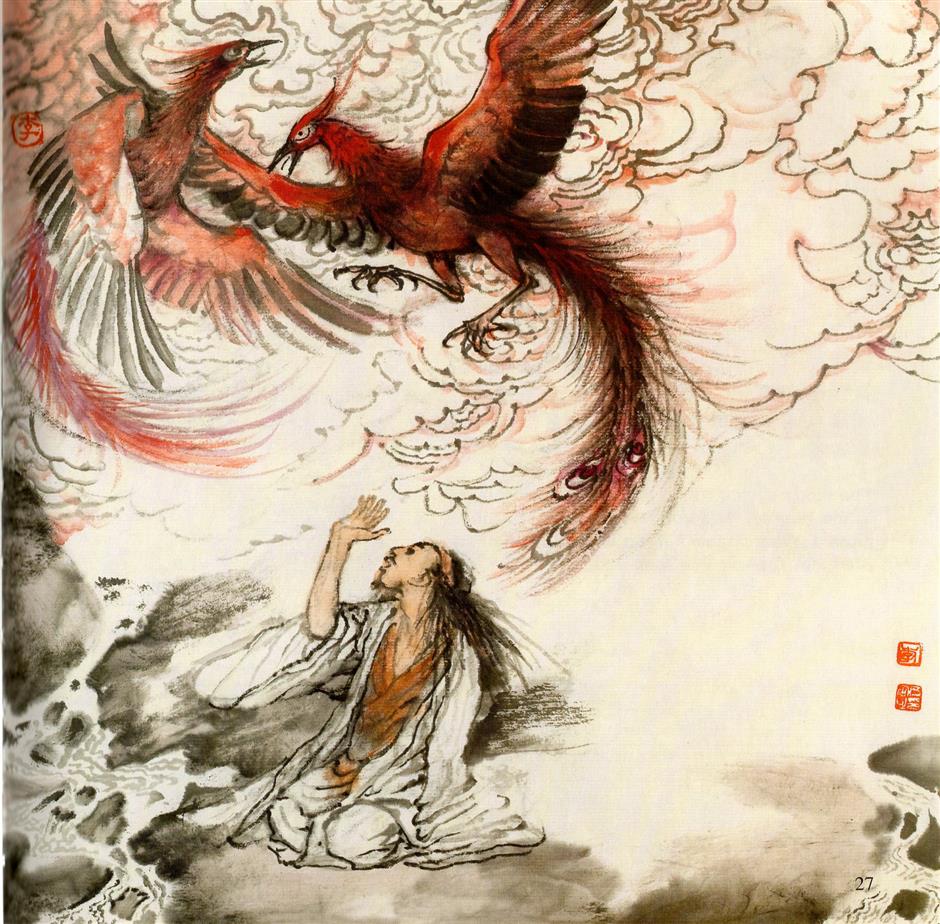 Linglun waits in the sacred Kunlun Mountain to hear and capture the voice of a phoenix, which was believed to be the most elegant sound in the world.

“Li yue,” which means “rite and music,” are important parts of ancient Chinese civilization. Rather than simply serving big ceremonies, the Chinese rite and music system was also believed to be essential in keeping a harmonious and ordered society with rules.

And this can be traced back to the reign of the Yellow Emperor.

At the time of the Yellow Emperor, people could use simple musical instruments during celebrations and sacrifices. But, the emperor was not satisfied with such noisy and random music.

One day the Yellow Emperor ordered Linglun, the man in charge of the court’s music, to explore the rules of music and make harmonious sounds that could be played at grand ceremonies.

Linglun fell into deep thought for days on end. To him, perfect music was sacred. He seemed to hear it but always failed to grasp and express it through instruments. As a consequence, he took off to the sacred Kunlun Mountain to discover the quintessence of music.

The sacred Kunlun Mountain embraced by the thousand-mile Ruo River was where the famed phoenix bird lived. The voice of a phoenix was believed to be the most elegant sound in the world.

It was said that the phoenix usually appeared in the Xie Valley, so Linglun built a hut there, waiting to hear and capture the bird’s elegant sound.

From dawn to dusk, Linglun sat on the rock, closing his eyes and listening to all the different sounds of nature. He heard birds tweeting, winds blowing through the trees, rains falling and streams running down the valleys. He even got the rhythm of the flowing mist. 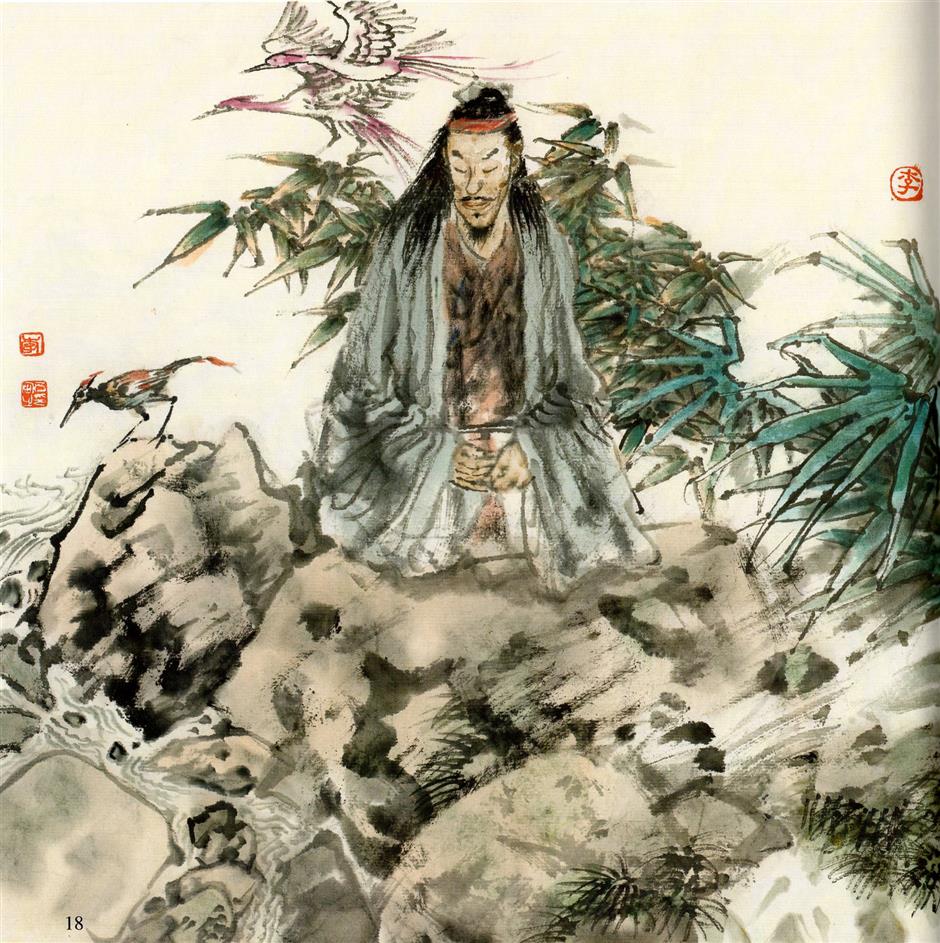 From dawn to dusk, Linglun sat on the rock, closing his eyes and listening to all the different sounds of nature.

Linglun was fascinated by the variety of sounds. It was either a single pure voice or multiple ones. It was days until Linglun finally heard the sound of a phoenix. And he was in luck as a male and female bird flew by. Their voices circled the air, sometimes they climbed high into the sky and sometimes they swooped low before disappearing.

Linglun was immersed in the phoenix sound for days. He found that the male phoenix sounded loud and passionate, while the female’s voice was soft and gentle. When they landed, the Yellow Emperor’s music man found that each bird would sing six times separately, then sing together once before flying away.

As the sunshine illuminated in the valley, Linglun felt refreshed. He looked at the green bamboo around him and cut some down to make a tube.

He carved some holes into the tube and blew. The sound was unpleasant to the ear, so much so that it frightened nearby birds. Linglun realized that the tube was not smooth enough.

He then cut down another 12 bamboo tubes and modified them to improve their sound. Linglun, once satisfied with his modifications, then named the 12 laws of music according to the sounds made by the phoenix.

He tried playing a few songs and, surprisingly, found that the 12 laws of music matched up with the five traditional Chinese tones — do, re, mi, so, la.

He added more animal sounds to his repertoire of music. He used a drum to present a hoof beat and a whistle for a bird chirping. 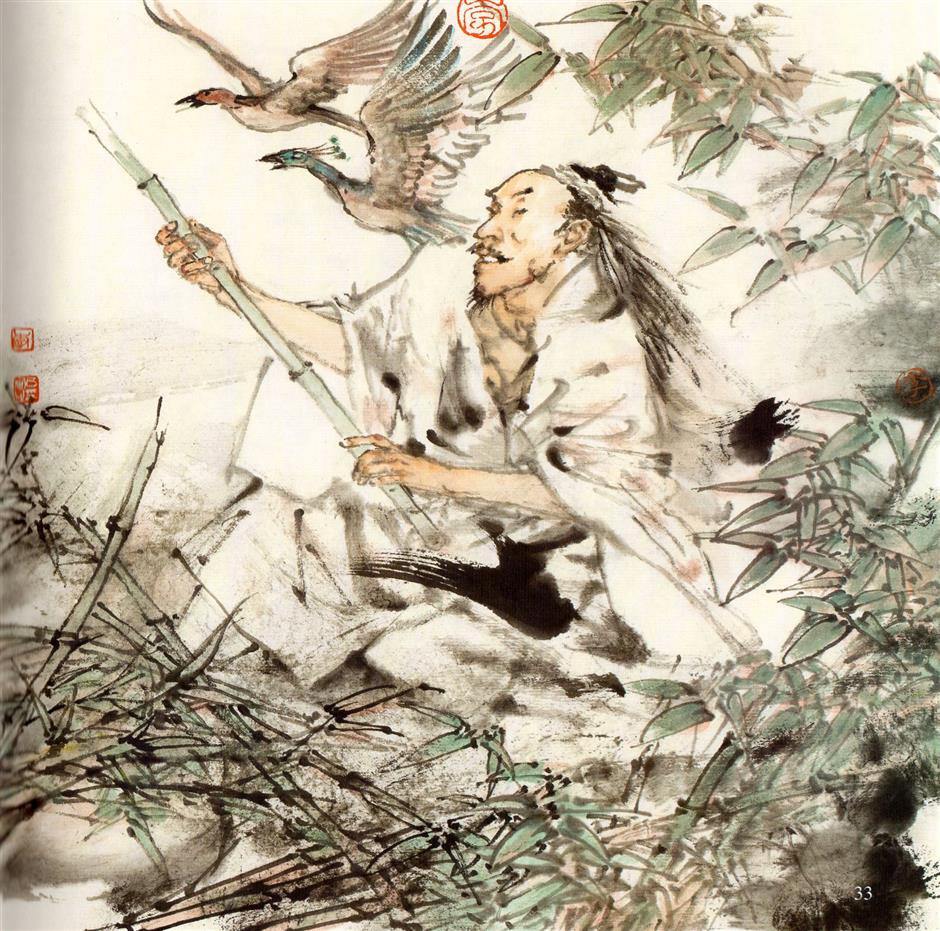 Enlightened by the Phoenix's song, Linglun looked at the green bamboo around him and cut some down to make a tube.

Linglun went back to the Yellow Emperor with his 12 bamboo tubes. When he played the wonderful music he had discovered on his hiatus, the emperor and his officials were amazed.

The emperor said, “It should be the enlightenment from the heaven. Everything has its rule. We should allow changes and pursue harmony within the rules, which is also the proper government of a state.”

The officials agreed. One added, “Rites and music share similar rules, and they should work together.” 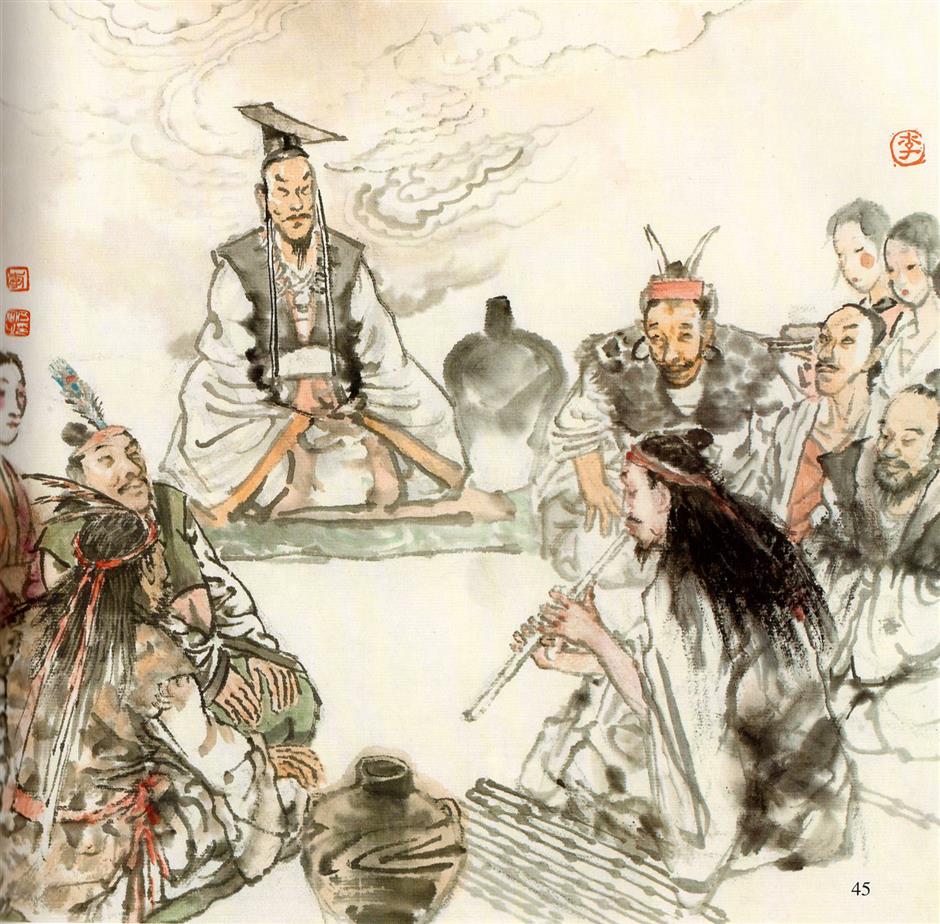 As Linglun played the wonderful music he had discovered on his hiatus, the emperor and his officials were amazed.

The Yellow Emperor later suppressed the rebellion of Chiyou and created Chinese characters and music. He won high prestige among every tribe, who elected him to be ruler of the world.

An alliance was expected to be formed at Mount Fu in the southeast of Zhuolu. And for that Linglun created a musical festival, which was a great success. It attracted people with different hairstyles, costumes and totems on their flags. They included dragon, phoenix, tiger, leopard and the color stars and clouds. The dragon flag of the Yellow Emperor’s tribe stood in the midst.

Cangjie, the man who first created Chinese characters, read out a document he drafted and Linglun played music called “Xianchi” with his musicians. It was said to be the first piece of music with a particular name in the Chinese history.

The Yellow Emperor stood in the middle and accepted worship from all the other tribe leaders and became emperor of the world.

The story of Linglun’s musical exploits was recorded in a historical document “Lushi Chunqiu” (Lu’s Spring and Autumn) in the Warring States Period. It noted Chinese people, in Neolithic times, had mastered music and its creation. Some modern archeological discoveries also helped prove that.

More than 30 flutes made from the bones of red-crowned cranes were unearthed at Jiahu Village of Hunan Province in the 1980s and in 2001. The ancient music instruments were proven to be around 9,000 years old and recognized as China’s oldest musical instrument, as well as the world’s oldest wind instrument. 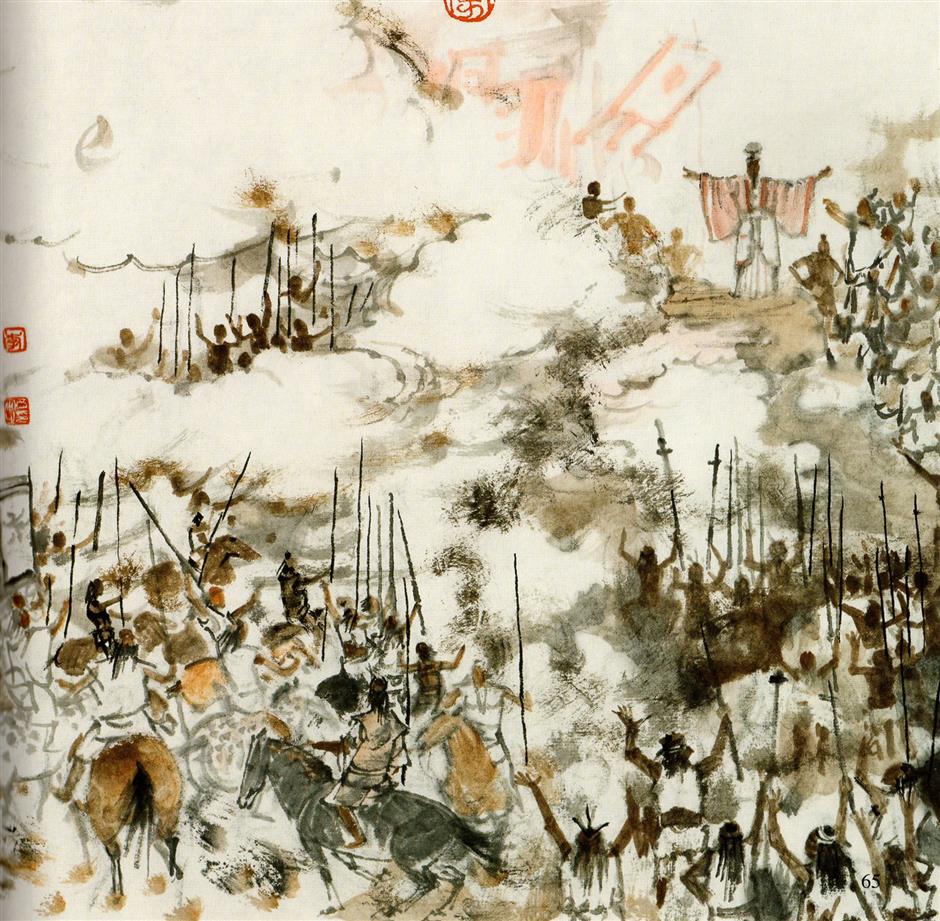 The Yellow Emperor stood in the middle, accepting worship from all the other tribe leaders and became emperor of the world.