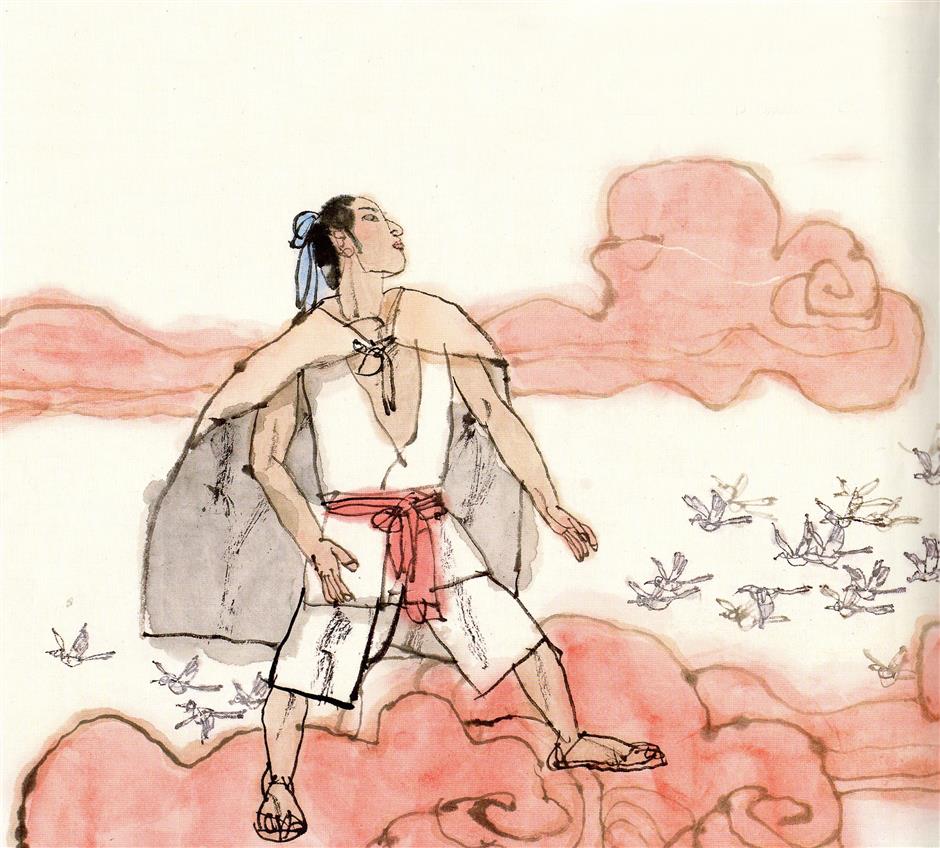 On every seventh day of the seventh lunar month, magpies will come together, bridging the Milky Way, so that two lovers who have been separated can reunite once every year.

The sparkling Milky Way that always shines in the starry night was once the channel connecting the immortal and mortal world in Chinese legends.

There was a beautiful immortal maid living to the east of the Milky Way named Zhinu, or the Weaving Maid. She was the granddaughter of the Lord of Heaven.

With magic silk yarn, the Weaving Maid wove layers of magnificent clouds on her loom. The clouds that she wove were called “clothes of heaven.” The clouds automatically change color according to different time and season.

The mortal world sits on the west side of the Milky Way. There lived Niulang, or Cowherd, whose parents died early and had to depend on his brother’s shelter.

He had to work from dawn to dusk, cutting firewood, grazing cattle and farming from childhood. Every night, he slept in the cowshed, looking at the starry sky while missing his parents in silence.

Then one morning his elder brother and sister-in-law told him to leave, saying he was old enough to stand on his own feet. They gave him nothing but an old ox.

Together with his ox, Cowherd found a wild field where he decided to start his life again. He blazed trails and paths, built a cottage, and opened up wasteland for cultivation, with the ox’s help.

Cowherd lived a hand-to-mouth existence and felt very lonely as the ox was his only company. He talked to the ox which seemed to understand his words sometimes.

One day, Cowherd led the ox to the meadow near the Milky Way. He lay on the grass alone while the ox grazed slowly aside. Looking up to the changing clouds, Cowherd fantasized about how his life would be wonderful if an immortal maid came down to help him.

As he drifted off to sleep, the ox suddenly began to speak.

It told him that the immortal maids would come to bathe in the Milky Way and one of them would be his wife if he hid her clothes.

Cowherd jumped with surprise at what he thought he had heard, but the old ox returned to silence. Despite these doubts, Cowherd hid himself in the reeds close to the Milk Way to check whether it was just a dream. 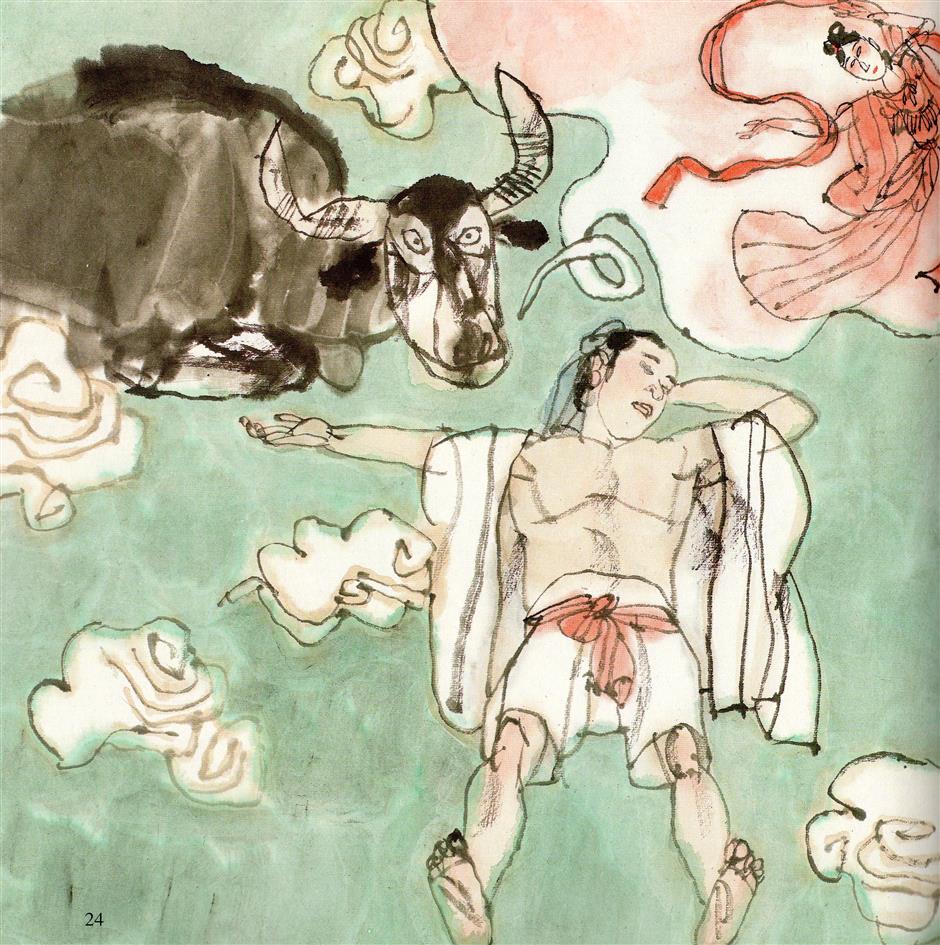 The old ox talks to Cowherd in his sleep

To his surprise, seven immortal maids arrived. They took off their beautiful dresses and jumped into the clear river, causing ripples on the surface like a white lotus.

Cowherd quickly hid the most beautiful dress left at the riverbank. Noticing Cowherd, all the other maids hurried away to get dressed and fled, but the Weaving Maid hid herself behind the reeds as she could not find her dress.

Cowherd built up courage and asked the Weaving Maid whether she would like to be his wife.

The Weaving Maid agreed as she had been curious about life in the human world and Cowherd looked honest and kind.

The couple led a happy life, with a son and a daughter. Cowherd continued farming as the Weaving Maid wove cloth. 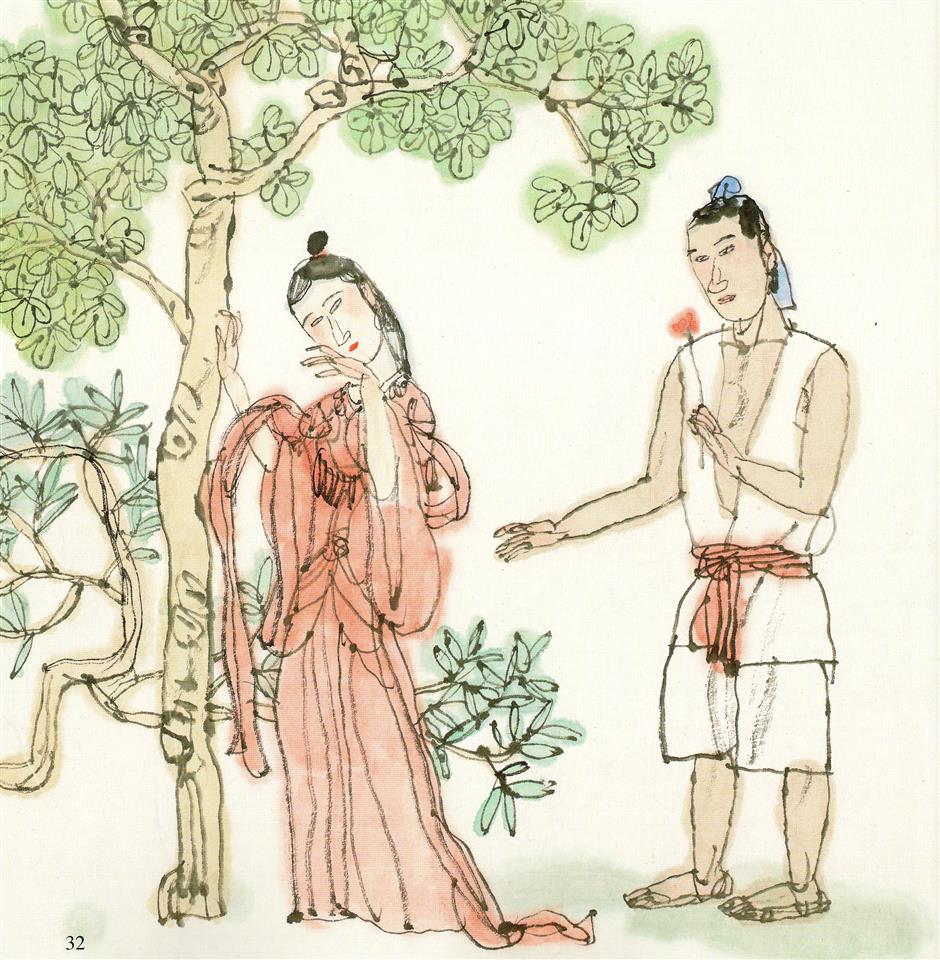 Cowherd asks the Weaving Maid whether she would like to be his wife.

Soon, news found its way to the Lord of Heaven. The furious lord ordered the arrest of the Weaving Maid and sent her back to heaven. Cowherd returned from farming, only to find his wife missing and children crying.

He put the two children in separate baskets and shouldered them with a pole. He rushed to the Milky Way, only to find it had disappeared. The Queen Mother took the Milky Way back to heaven.

Cowherd had no choice but to return home.

The children missed their mother and cried day and night. Even the old ox was too sad to eat or drink anything. 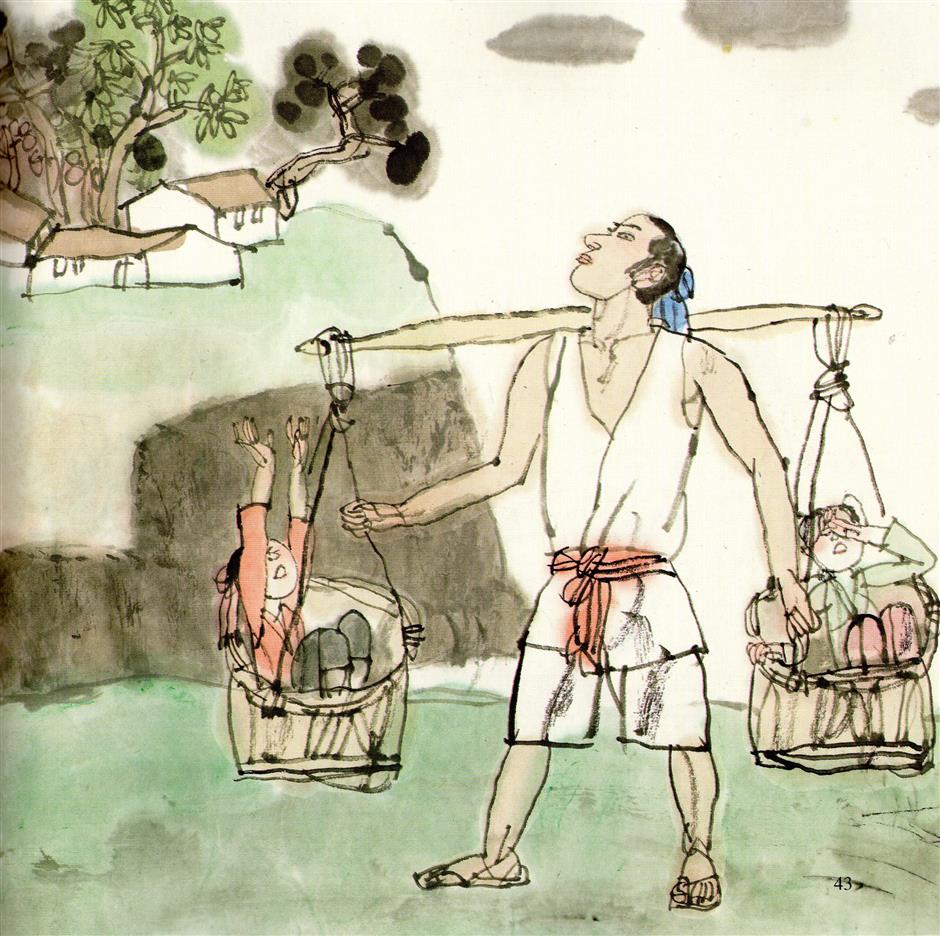 He rushed to the Milky Way with the two children, only to find the Way gone.

One day, the dying ox spoke again, he said, “After I die, you can peel off my skin and put it on. It will take you up to the Milky Way.”

Cowherd buried the ox with tears and followed what he said. Amazingly, he was traveling through stars and saw the Weaving Maid on the other side of the Milky Way.

Just as they were trying to cross the river, the Queen Mother appeared and stirred the Milky Way with her hairpin. All at once, raging torrents rose from the peaceful Milky Way.

But it didn’t stop Cowherd. He wiped his tears and began to scoop out water from the Milky Way with a dipper.

The Lord of Heaven was touched and allowed the couple to meet once a year on the seventh day of the seventh lunar month, with flocks of magpies forming a bridge over the Milky Way. On rest days, the couple could only look at each other from different sides of the galaxy. 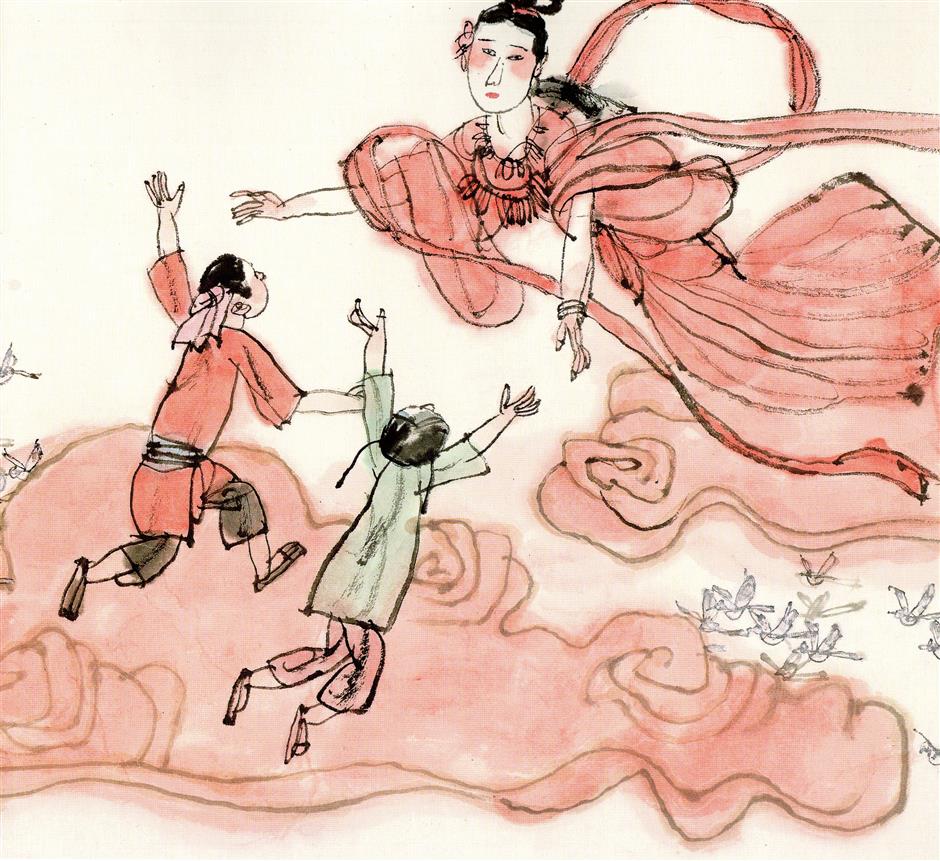 Today, we can still see them in the starry night. The two bright stars, Altair and Vega, at different sides of the Milky Way symbolize Cowherd and the Weaving Maid respectively in Chinese culture.

The night of seventh day of the seventh lunar month is called “Qixi,” literally “the Night of Sevens” in Chinese. It was traditionally celebrated as a Girl’s Day, and is often taken as a Chinese Valentine’s Day nowadays.

Traditionally, girls will compete threading needles on the Qixi Day, as a way to pray for clever hands.

There are still traditions of bathing in rivers on the day in some southern regions, wishing the river bathed by the immortal maids will bring them happy and healthy lives.

To commemorate the old ox who sacrificed himself for Cowherd and the Weaving Maid, children in some regions collect wild flowers as decoration on the ox horns, as showing gratefulness.

In the evening, girls and young ladies invite female friends to gather in the moonlight and worship the Weaving Maid.

With incense burning, they pray to the Vega for a good husband or clever children and chat together till midnight. 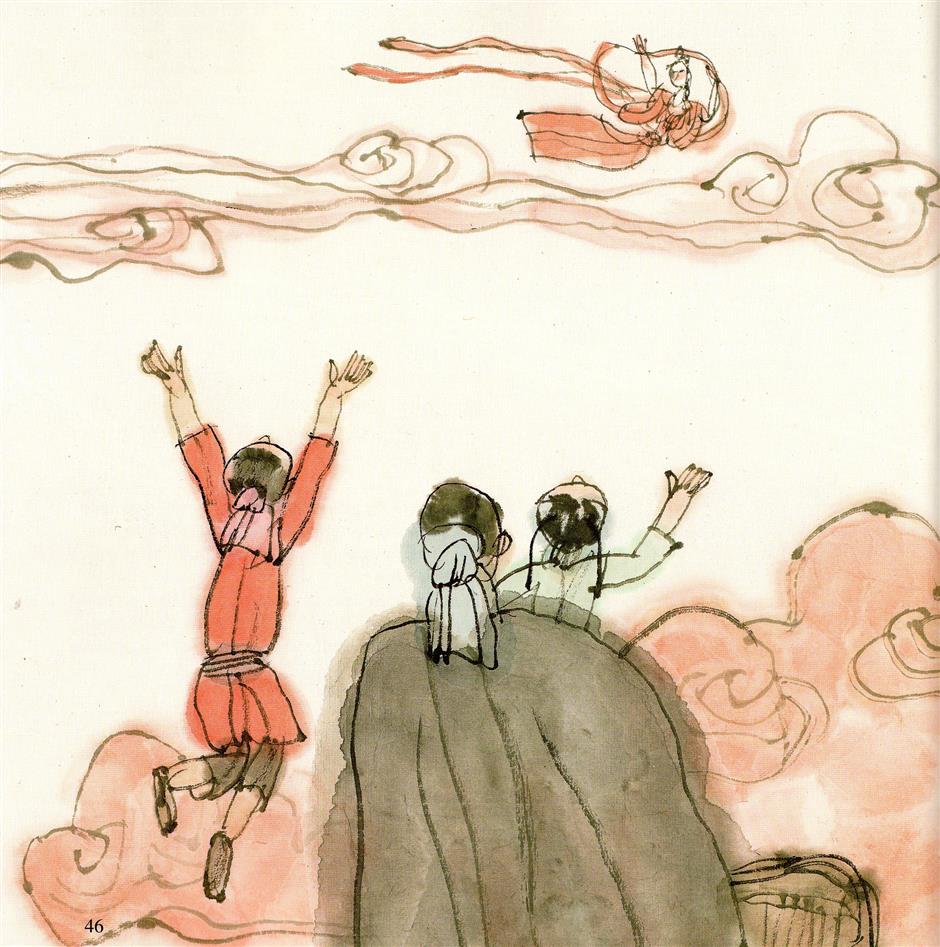 On rest days, the couple could only look at each other from different sides of the galaxy.