Ningbo museum enthralls visitors with a glimpse into how parents prepared for their daughter’s marriage even from birth.

In ancient times, when a girl was born, her parents would prepare dowries for the future son-in-law’s family. After years of preparation, the dowries often included a myriad of items, from beds and wardrobes to mirrors and bowls.

Every item was painted with red lacquer, traditionally considered auspicious in China. The bigger and better the dowry, the higher the status their daughter would have in her new family. 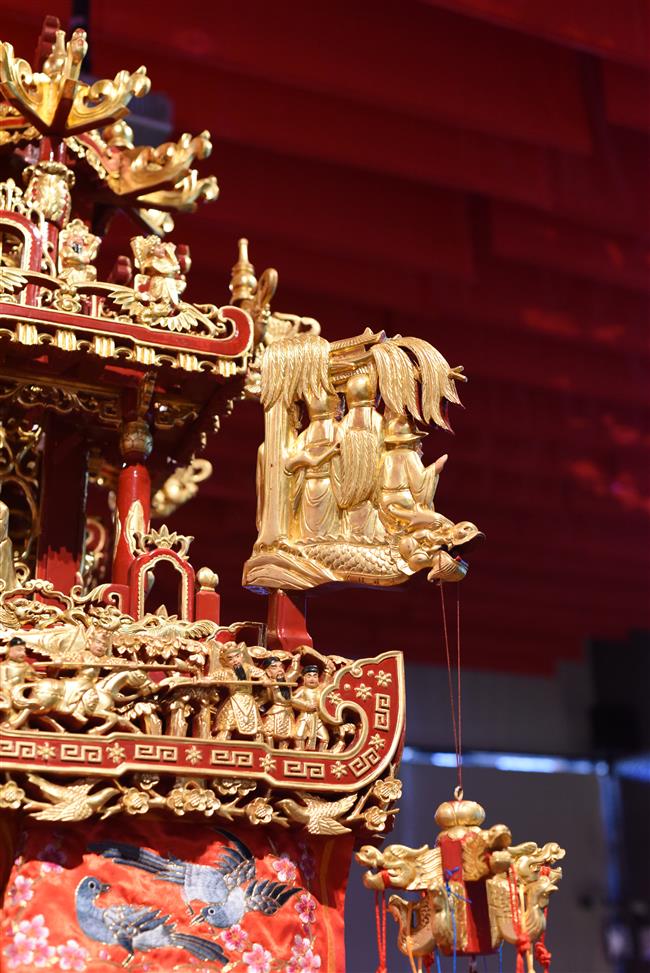 The museum exhibits one of the top-notched bridal sedans that is dubbed wangongjiao. 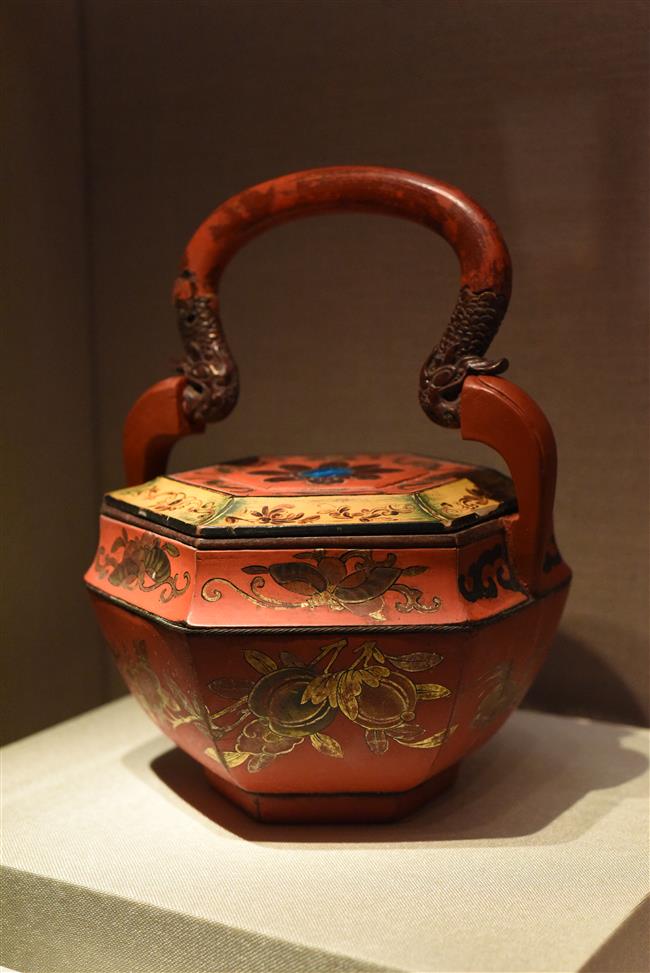 That tradition pervaded in China for centuries, especially in Zhejiang Province. Among its cities, Ningbo could epitomize dowry culture by virtue of the so-called “Shi Li Hong Zhuang (十里红妆),” which literally means the procession carrying dowries might stretch for 10 li — 5 kilometers — when it was for the daughter of a well-off family.

Though such a spectacular phenomenum has now disappeared into history, it provided a remarkable snapshot of past times. Today, some Ningbo locals still prepare vintage-style red utensils on wedding days, creating an auspicious vibe and praying for happiness.

The highlight of the wedding day was the bridal sedan, in which the bride would sit and be carried to the bridegroom’s family house, followed by porters carrying her dowry.

The museum exhibits one of the top-notch bridal sedans preserved today. It is dubbed “wangongjiao (万工轿),” meaning a craftsman had to spend thousands of hours completing it. It was made according to the traditional mortise and tenon technique that joined hundreds of pieces of wood at an angle of 90 degrees. 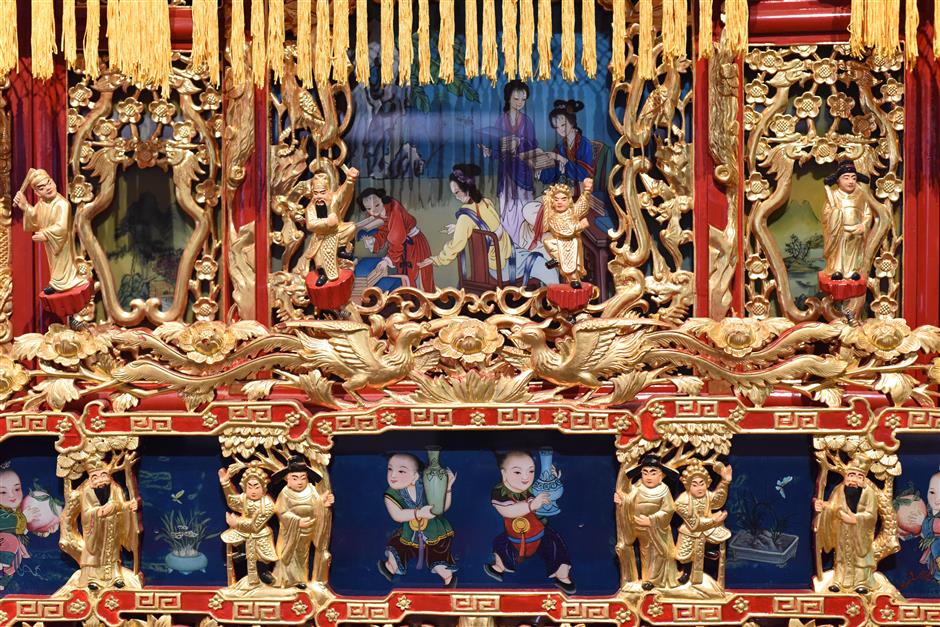 Craftsmen use common trees, often camphor and gingkoes, to engrave floral patterns and immortal motifs on a sedan chair. 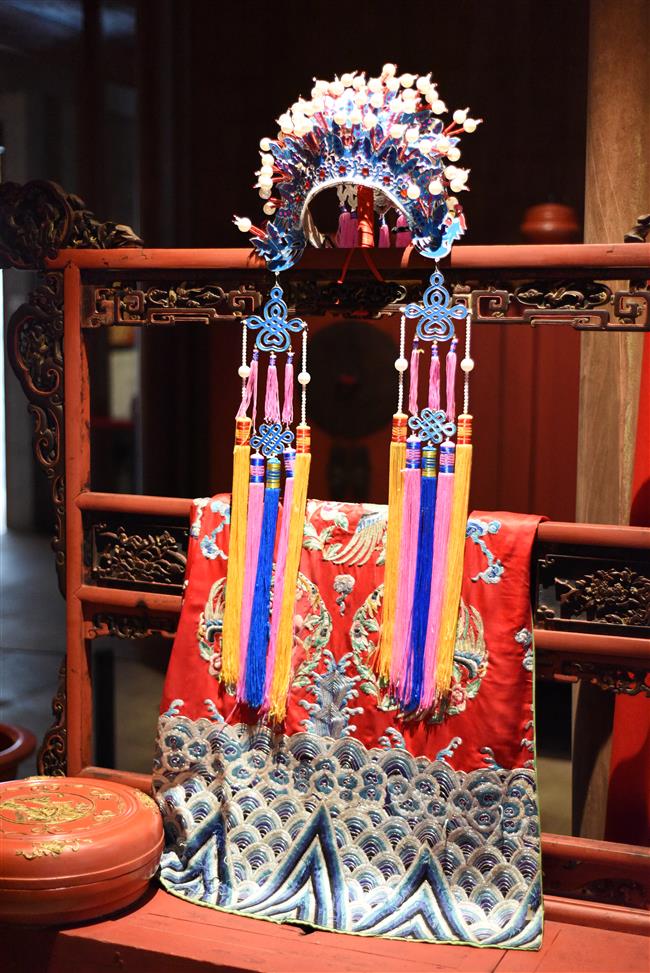 The sedan chair was engraved with auspicious floral patterns, legendary stories and mythical creatures, embedded with ornate paintings on glass and carved with hundreds of figures. The whole surface is painted with glittering gold and red lacquer, with tassels hanging from the top.

This is a classic “Ba Tai Da Jiao (八抬大轿)” — which literally means “a sedan chair that needs eight bearers.” In old times, only a wealthy family could afford such a stylish sedan chair, because the rent equalled to the price of tons of rice.

“In other places, modern sedans have already replaced the traditional sedan chairs, but Ninghai locals stick to carrying the bride with it, paying respect to tradition,” said Zhang Yaping, director of Ninghai County Intangible Heritage Center.

At present, the best bridal sedan is the one in Zhejiang Museum. It was made in the late Qing Dynasty (1644-1911) and symbolized the top level of local craft.

Craftsmen used common trees, often camphor and gingkoes, to engrave floral patterns and immortal motifs. Timber had to be dried out in shade for at least six months in a bid to prevent cracks.

Then it was coated with layers of red lacquer made from cinnabar, a material commonly used in traditional Chinese medicine to treat neurological ailments. Lacquer is moisture-resistant, heat-resistant, corrosion-resistant and never fades on wood. Craftsmen ground cinnabar to produce a smooth texture, aiming to create delicate lines in sculptures.

Eventually it was thick enough so that designs, figures and landscapes could be carved. Finally, gold was applied, which made the dowry look glitzy and luxurious.

Wooden furniture accounted for a large part of dowries, from beds and wardrobes to shelves and tables. They were often carved with dragon and phoenix patterns, which were rare in Chinese folk culture, since the two mythical creatures were exclusive to the royal family.

However, Ningbo natives were allowed to use such ornate ornaments because of a story from the Southern Song Dynasty (1127-1279). Prince Zhao Gou fled to Ningbo hiding from enemies. He survived with the help of a village woman. To return the favor, Zhao promised to marry her if he came to the throne.

However, she was not to be found when that happened. So, to honor his lifesaver, Zhao granted local people the right to use dragon and phoenix patterns. The story added some legendary color to the dowry culture and also reflected women’s wisdom and braveness.

After a series of ceremonial procedures, newlyweds would be sent to their bridal chamber, where most of the dowry items had been put. Always, a canopy bed was at the center. 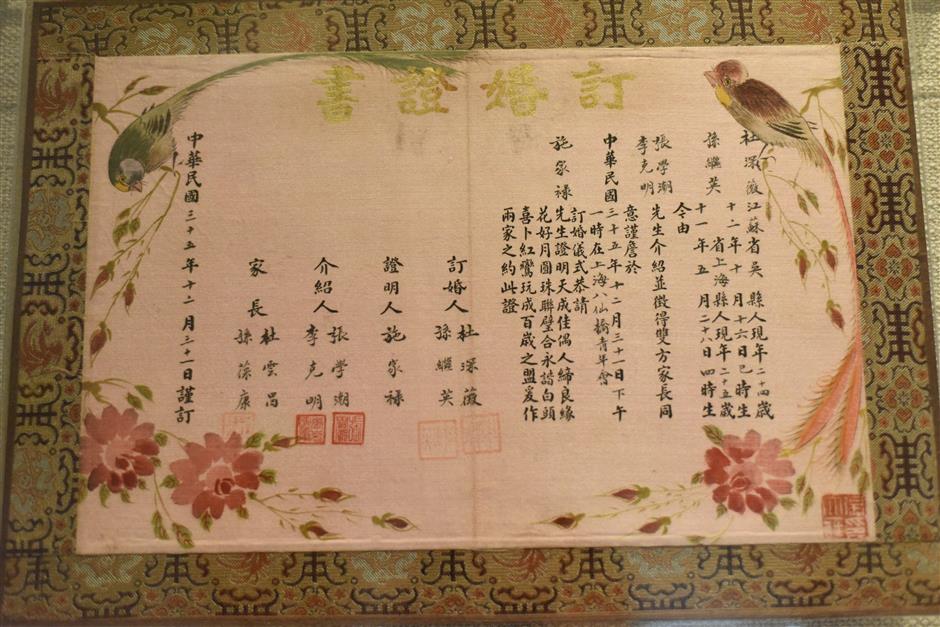 A marriage certificate on display at the museum 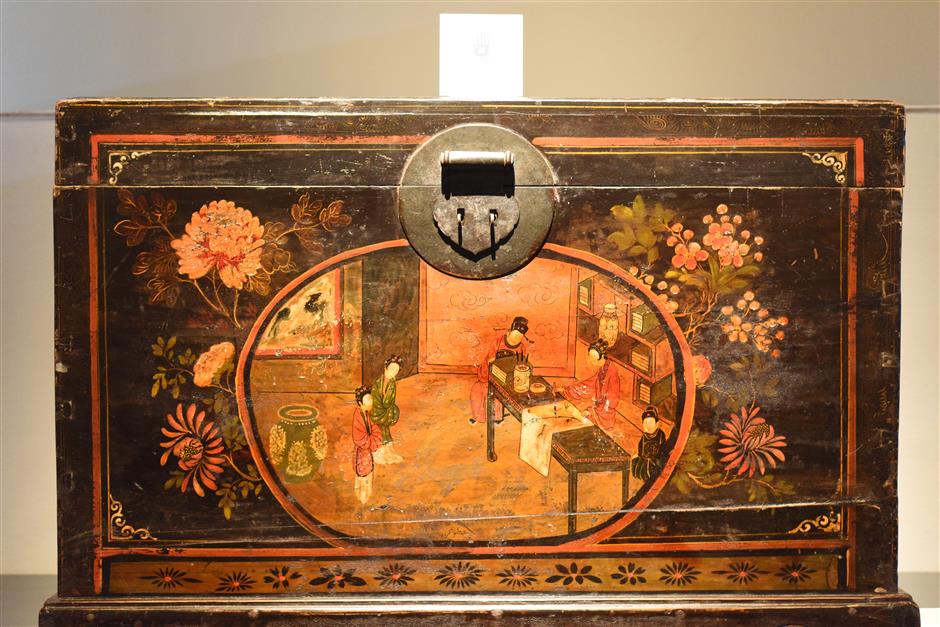 A wooden box for newlyweds’ clothes

The museum has dozens of well-preserved beds from folk collectors. Though seldom used in modern times, such traditional beds can be still seen in some old houses. Due to their sophisticated carving and superb woodwork, they have become very desirable antiques.

Locals called them “qiangongchuang (千工床),” which literally means it required thousands of workmen to complete. The name tells of the time-consuming making process and exquisite techniques. Except for lacquer, cinnabar and gold, natural materials including seashells, azure stones and gems were also applied as ornamentation, preserving the luster for long time.

Canopy beds feature wooden posts at each of the four corners extending above the bed board and a suspended rooflike structure. They were often intricately decorated with auspicious motifs, particularly relating to fertility, longevity and a happy marital union.

When a bride’s parents invited craftsmen to make the bed, they would host a ritual to worship ancestors and immortals, praying for thriving offspring. That testified to the bed’s importance in dowry culture.

An “offspring barrel” was used to bathe the newborn, while a milk bucket was used to ask for milk from other new mothers if a mother didn’t have enough to feed her baby. These items have disappeared into history but recorded past parenting methods.

The sleeping room also contained every tool used in embroidery. Ningbo women were expected to be skilled in needlework from an early age. One of the standards of judging a good wife, or fine lady, was her skills in embroidery.

In ancient times, when a girl or boy reached the age of marriage, their parents would ask a local woman matchmaker to find a suitable match for their child. Usually, the matchmaker would look among families of equal social rank and wealth. Such equality was considered an important element for a happy marriage. 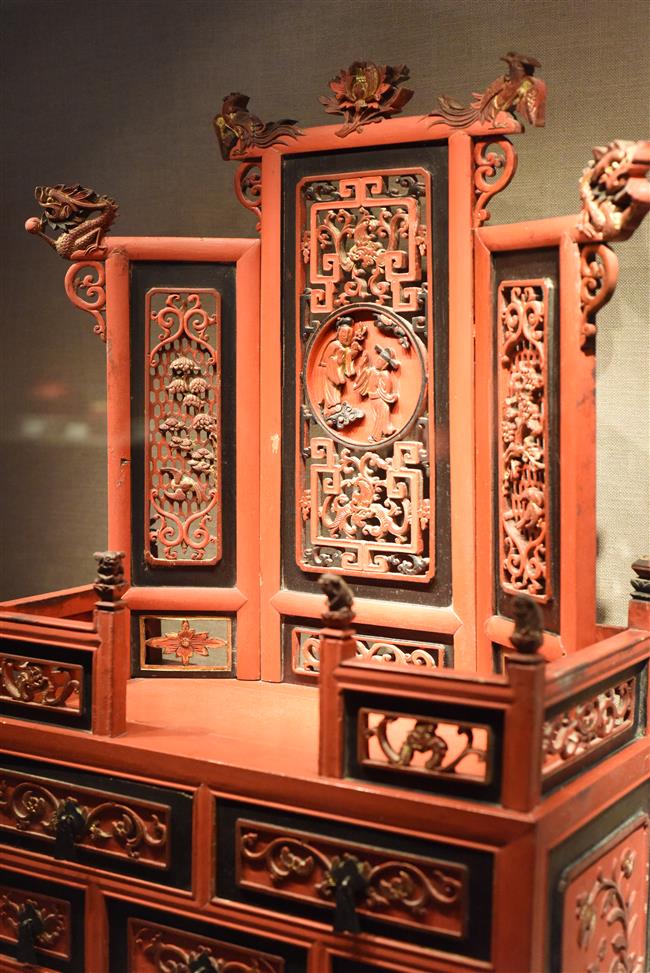 The sedan chair is engraved with floral patterns and motifs.

Next, the dates of birth and the Chinese zodiac of the potential match would be exchanged between the two families, and a fortune-teller would analyze whether or not they could get married. If their personal information was considered a match, they would be engaged. In ancient China, marriage was decided by parents, and young people had no choice but to obey.

Matchmakers were indispensable in ancient marriages. On the engagement letters and marriage licenses, their name was written beside those of the parents and newlyweds. That can be seen in old licenses on display at the museum.

In modern times, marriage for love is the norm. However, Ningbo locals still live up to the convention. They would appoint a relative to be matchmaker on wedding days with the hope for future happiness.