Suzhou: Building a new future out of tradition 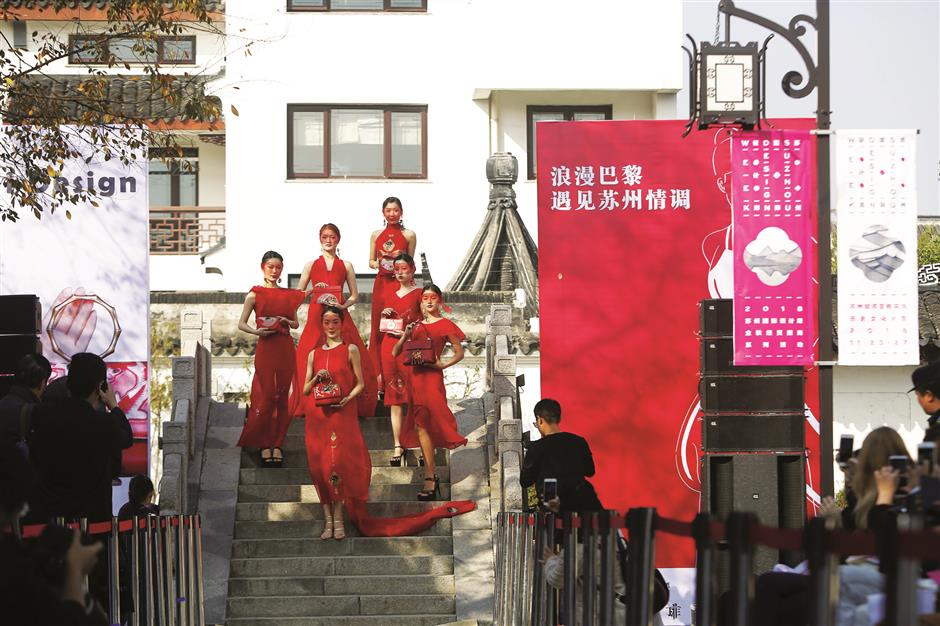 Models showcase the haute couture collection by Suzhou designer Ding Fei during a fashion show on Saturday. It is part of the Suzhou International Design Week, which closes tonight at Taohuawu in Gusu District.

The first design week in Suzhou — a 2,500-year-old city famous for its extremely rich culture and exquisite handicrafts — creates a new vision for the city’s future and presents new ideas and the latest achievements in urban renaissance, industrial upgrading, people’s livelihood improvement and cultural inheritance.

The theme “Grand Design, New Economy” underscores Suzhou’s plans to become a “City of Design” and a “Capital of Manufacturing” by using its rich cultural heritage as an key resource, said Xu Gang, director of Gusu District.

Xu is also director of the Management Committee of the Suzhou National Historic and Cultural City Preservation Areas.

Like “X-Port Venice” project, Suzhou aims to showcase “the excellent cultural heritage is the origin of its innovation.”

The project curated by Michele Brunello focuses on “traditional modernization and commercial development.” It studies and analyses how Venice’s glass, fashion and household industries have created an inheritance and fostered innovation through the combination of education, culture, tourism and other industries.

And it seeks a way to integrate the visions of Venice and Suzhou to build a dream world interwoven with reality and imagination, elements and symbols and fables. 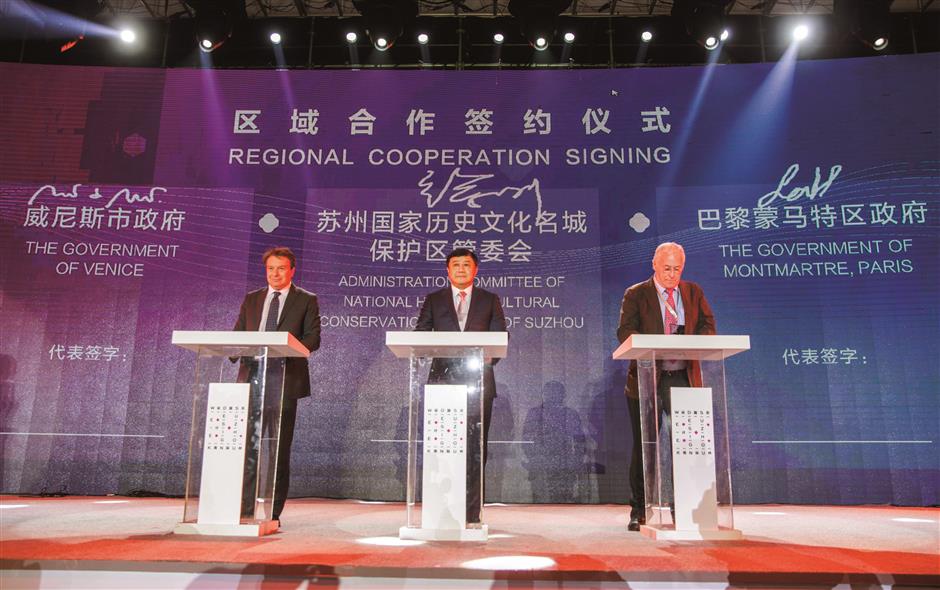 Representatives from Venice, Suzhou and Montmartre sign cooperation agreement at the grand opening of the Suzhou International Design Week on Friday night.

In the inheritance of development for innovation, the “Venice of the East” undertook a dialogue with the caretakers of Montmartre. The well-known attraction in Paris’ 18th arrondissement melds French and Chinese aesthetics.

Ding has studied Chinese culture and Suzhou handicraft for more than 16 years and this time presented her haute couture collection in red and black and featuring Chinese ink-wash painting which broke and reconstructed the balance between ancient and modern times.

On the catwalk, Ding practiced the concept “Newly Crafted in Suzhou” which is the core value of the design week premiered at Friday night.

During the grand opening of the event, an action plan of “Newly Crafted in Suzhou” was released together with the Taohuawu Creative Industry Zone.

The “Newly Crafted in Suzhou” action plan is expected to take Suzhou’s representative traditional handicrafts to a breakthrough, and cluster domestic and foreign designers, artists, techno makers to promote the introduction of international resources and deepen international exchanges and cooperation. 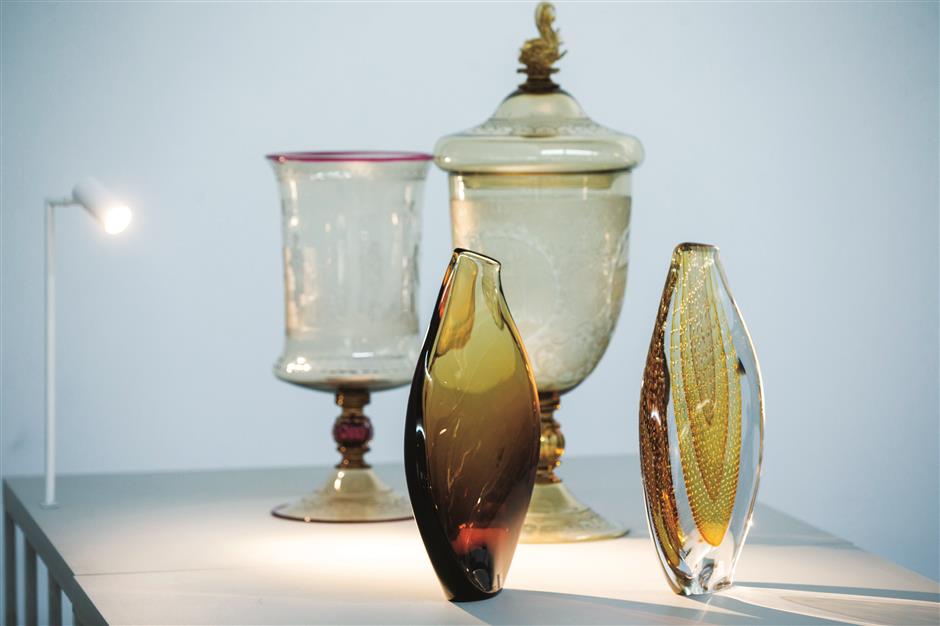 Some exhibits, part of the “X-Port Venice” project, are on show.

A forum on Sunday studied opportunities for the development of new Suzhou brand — making a new style but building on the city’s traditional handicrafts and heritage.

In Gusu District alone, there are 106 intangible cultural heritages, among which five are of world class and 18 of national level — more than anywhere else in the country.

“Newly Crafted in Suzhou” is also a major part of business innovation that was part of a parallel session of design week, featuring exhibitions in the concepts of a design city, a humanistic Suzhou and life aesthetics to promote industrial innovation and urban renaissance.

“Newly Crafted in Suzhou” should not be just products, or crafts, or only in Suzhou. “Newly Crafted in Suzhou” should become a way of thinking, expression and lifestyle — a conclusion made after brainstorming among industry elites, including Liu Zhiyong, vice director of the Suzhou Administration of Culture, Radio, Film, Television, Press and Publication, Tao Xiaonian, chairman of the China National Arts and Crafts Society, Dennis Nothdruft, curator at London-based Fashion and Textile Museum, Lin Cunzhen, designer of the emblems of Beijing 2022 Olympic and Paralympic Winter Games, Lenovo chief designer Yao Yingjia and Mo Junhua, chairman of Suzhou Graphic Designers Association.

The Suzhou International Design Week also signed agreement with London-based Fashion and Textile Museum to make “Newly Crafted in Suzhou” an appearance on the international stage.

“Newly Crafted in Suzhou” will be grounded in the rich cultural heritage of Suzhou, showcasing to the world and contributing to its new economy through its brand designing, building a showcase of design and promoting the optimization and upgrading of regional industries. 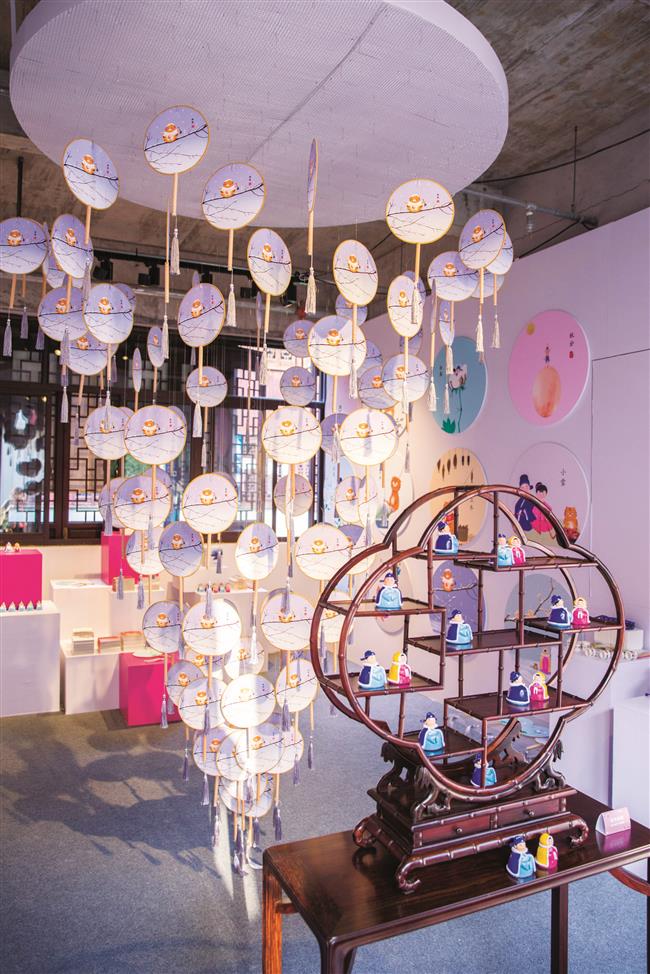 Hand fans are on display as part of the “Sentimental Suzhou” show.