THOUGH most emperors in the world handed down thrones to their male descendents, some of the earliest Chinese emperors went against tradition. They ignored a time-honored tradition of primogeniture and selected their successors for their outstanding ability and high moral standards in what is called “Shan Rang,” or throne abdication.

Emperors Yao, Shun, and Yu were three great leaders in ancient China who contributed to a magnificent era of the nation’s civilization.

Yao was the great-grandson of the Yellow Emperor, and the first emperor to hand his throne down to non-family members. After being appointed ruler, Yao still maintained his simple way of life. He ate half-polished rice and wild vegetable soup, wore coarse linen clothing in summer and deer-skin coats in winter. Yao selected a group of virtuous and wise officials to help him rule.

One of Yao’s assistants, Gaotao was in charge of law. He always settled lawsuits correctly, with the help of the mystical beast Xie Zhi.

Xie Zhi was the size of a sheep and shaped like a kylin with a horn in its head. It could speak and was capable of distinguishing between right and wrong, good and evil.

Whatever disputes people had, Xie Zhi would point its horn to the wrong side. It would swallow evil people yet spare those with minor infractions.

Kui, the leader of a tribe, was put in charge of music in Yao’s reign. He composed music by imitating the sounds of nature, which brought inner peace to whoever listened to it.

He beat on the “fou,” a percussion instrument, made of elk skin, which attracted wild animals

Though supported by the people, Yao still kept looking for better rulers. Hearing about a virtuous recluse Xuyou, the emperor paid a visit and invited him to rule the world.

Xuyou rushed to the Ying River to wash his ears and said, “I don’t like what you have just said. A bird in the woods only needs a branch to nest; a mole at the river only need some water to quench its thirst. Why would I take on the world for?” 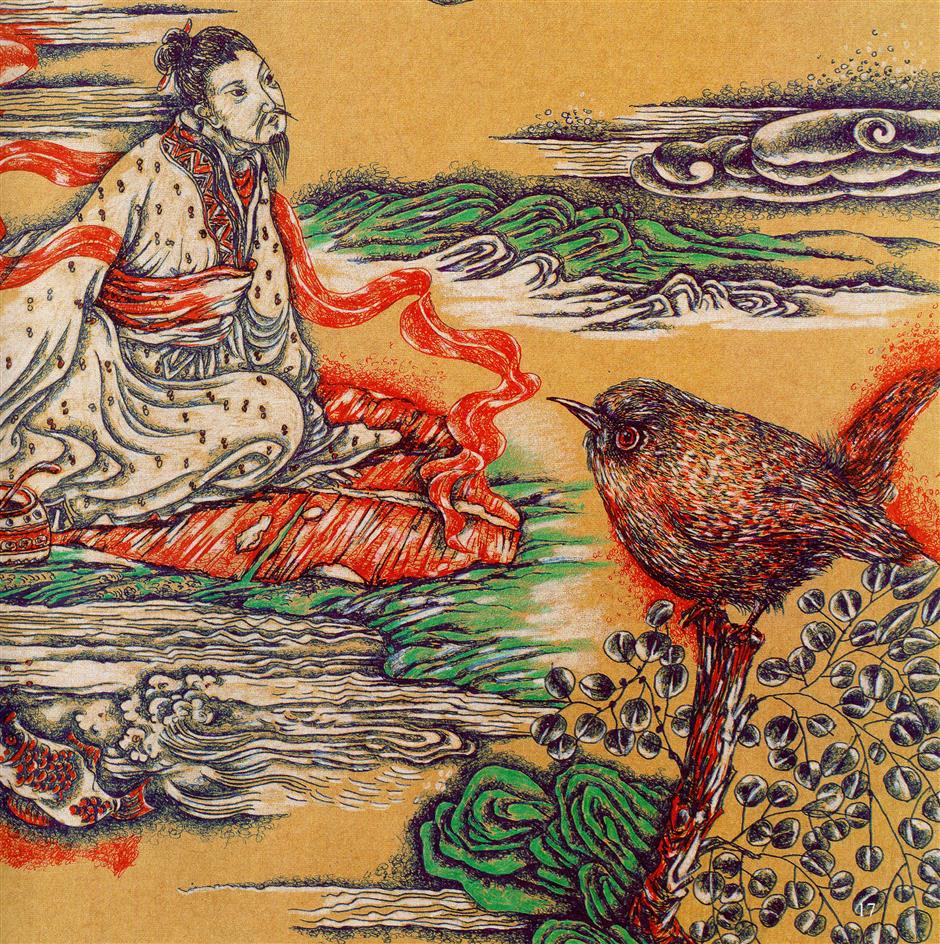 Xuyou rushed to the Ying River to wash his ears and refused Yao's inviting him to be the ruler.

In Yao’s late years, he was eager to find a qualified heir. Some officials suggested Yao’s son Danzhu as a candidate. But Yao refused as he considered Danzhu not morally sufficient for the throne. Others recommended Shun for his filial piety and good moral record.

Although Gusou, his blind father, stepmother and stepbrother, Xiang, treated him badly, Shun remained a filial son and a loving elder brother. 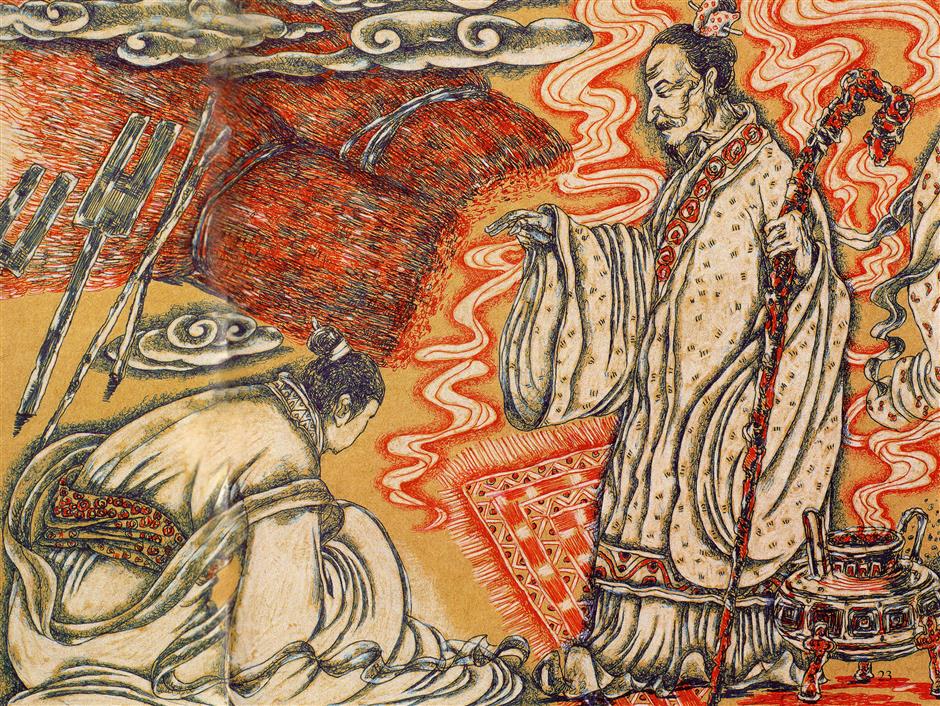 Whenever his younger brother Xiang bullied Shun, his parents would punish Shun.

Yao appreciated Shun’s morality and decided to test his capability as a ruler. And Shun proved his talent equal to his virtue wherever he was sent.

The farmers in Mount Li had been in constant dispute on the border fields. Shun settled the argument and restored peace to the area. The fishermen on the riverside had been fighting over a small island cay for years.

Influenced by Shun, the people started to show respect for the elders. The people in Dongyi used to make rather rough and fragile pottery. Shun helped perfect their techniques quickly.

Passing Yao’s test, Shun was appointed as one of his assistants and allowed to marry his two daughters, Ehuang and Nuying.

They lived at the bend of the Gui River. Not long after they settled, people started to gather and live there. A village was soon formed, which later transformed into a town and then a major city.

This made Shun’s family jealous. The blind father, stepmother and stepbrother began to think of ways to kill Shun and take his treasures.

Just as Shun was working on the granary roof, he heard a strange crackling and popping sound. The granary was on fire and the ladder disappeared. Shun spread his arms and found himself flying down safely like a magpie.

Days later, Xiang brought his father’s request for Shun to dredge the well. Ehuang and Nuying this time suggested Shun to wear the dragon pattern outfit inside his old coat.

Just as Shun descended into the well, his rope was severed, while mud and rocks came howling down from the top.

Shun quickly removed his coats and swam to another well through a hole in the well wall. He escaped just like a dragon.

Assuming Shun dead, his family divided his property and belongings. Just as the younger brother Xiang made himself comfortable at Shun’s home, Shun showed up unexpectedly.

Xiang was startled and said awkwardly, “I have been sitting here grief-stricken, worried about you.”

Shun replied, “Now that’s exactly what a brother would do.”

Rather than bearing grudge, Shun honored his parents even more, and showered his little brother with even more love.

After close observation, Emperor Yao nominated Shun as his successor. He held a big ceremony, on which he gave his crown to Shun. 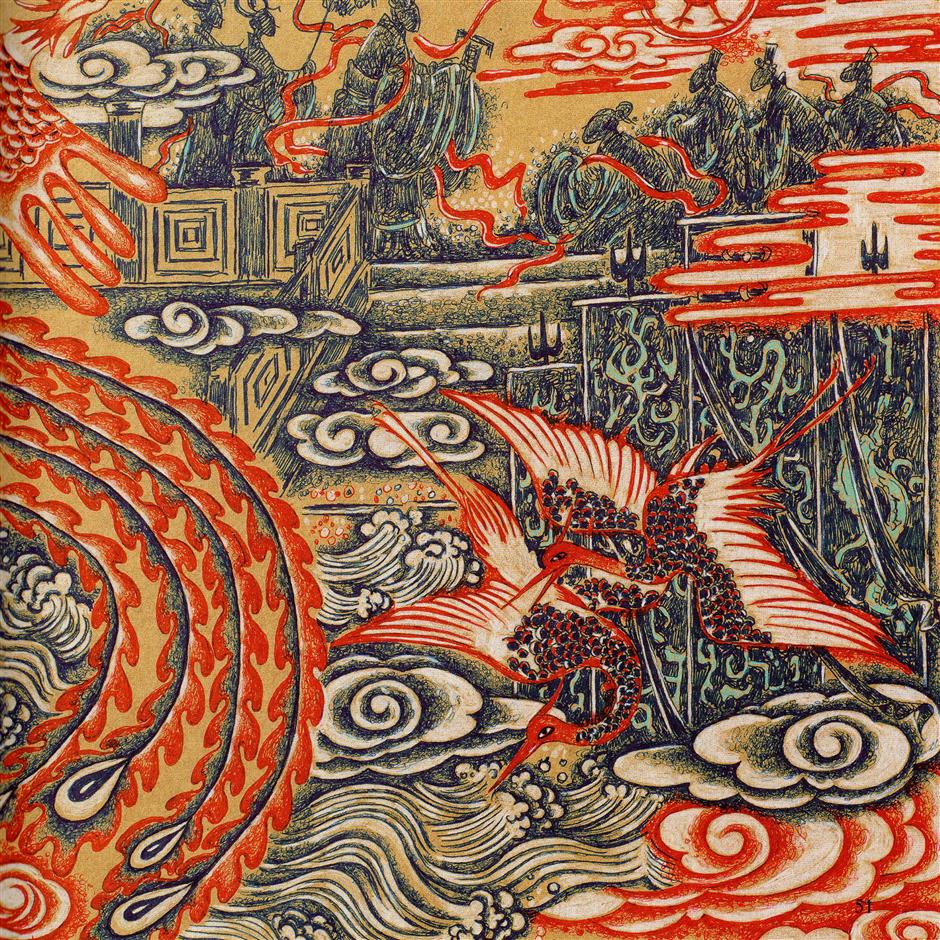 Emperor Yao held a big ceremony, on which he gave his crown to Shun.

Receiving the throne, Emperor Shun was still modest and worked just as hard alongside his people.

When he got old, he chose a very able and widely respected Yu as his throne successor, much in the same way Yao chose himself.

Yu tamed a huge flood and persuaded the rebelling Sanmiao tribe to surrender without a fight.

Giving his crown to Yu, Shun traveled to the south together with his family, helping the mountain people farm.

He died from overwork in the wild field of Cangwu. His wives Ehuang and Nuying mourned for days. Their tears dropped on nearby bamboo, leaving eternal marks. The bamboo with tear marks were later called Spotted Bamboo, also known as mottled bamboo.

The two women later died of deep sorrow at the Xiang River, and the Lord of Heaven named them “Xiang River goddesses” in tribute.

Heartbroken Xiang buried his elder brother and then continued to work tending the crops at the foot of Mount Jiuyi.

Eventually he turned into a rock sculpture of an elephant, forever overlooking and protecting his brother who rendered good for evil.