Several distinctive Chinese Buddha figurines have been sculpted since the Southern and Northern Dynasties (AD 420-581) when Buddhism began to be widely worshiped.

Different from large-sized stone grottoes, these figurines blended into Chinese culture featured regional traits, and gradually became an emblem of the religion. They have deeply influenced a wide variety of areas including art and architecture.

An exhibition displaying the ancient religious metal figurines, from the Southern and Northern Dynasties, is now on show at the Wulin Pavilion of the Zhejiang Museum through February 28. The changes and development of Buddhist culture is shown through the 360 antique pieces on display. They have been collected from 49 museums from Hohhot in the Inner Mongolian Autonomous Region of northern China to Dali City in Yunnan Province of southwestern China.

During the Southern and Northern Dynasties, artisans used metal to showcase Buddha’s immortal body. By then, hairstyles and costumes had already been converted from Indian designs to Chinese style. It was the first heyday of figurines-making art.

When Xianbei, a minority group, ruled northern China, the figurines started to develop their ethnic characteristics. At the same time, the religion exchanges between northern and southern China were frequent, and in return influenced the styles of each other.

The production centers were in present-day Xi’an City in Shaanxi Province, Handan City in Hebei Province and Luoyang City in Henan Province. In northern China, carving stone grottoes were populated images of Buddha. These caves are still welcoming visitors today. 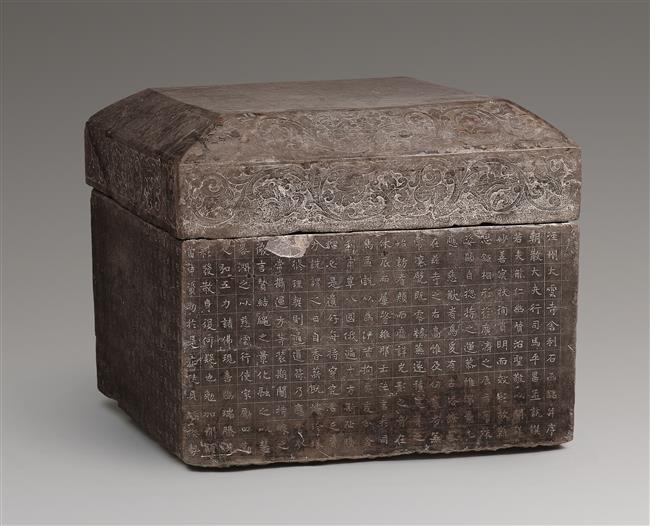 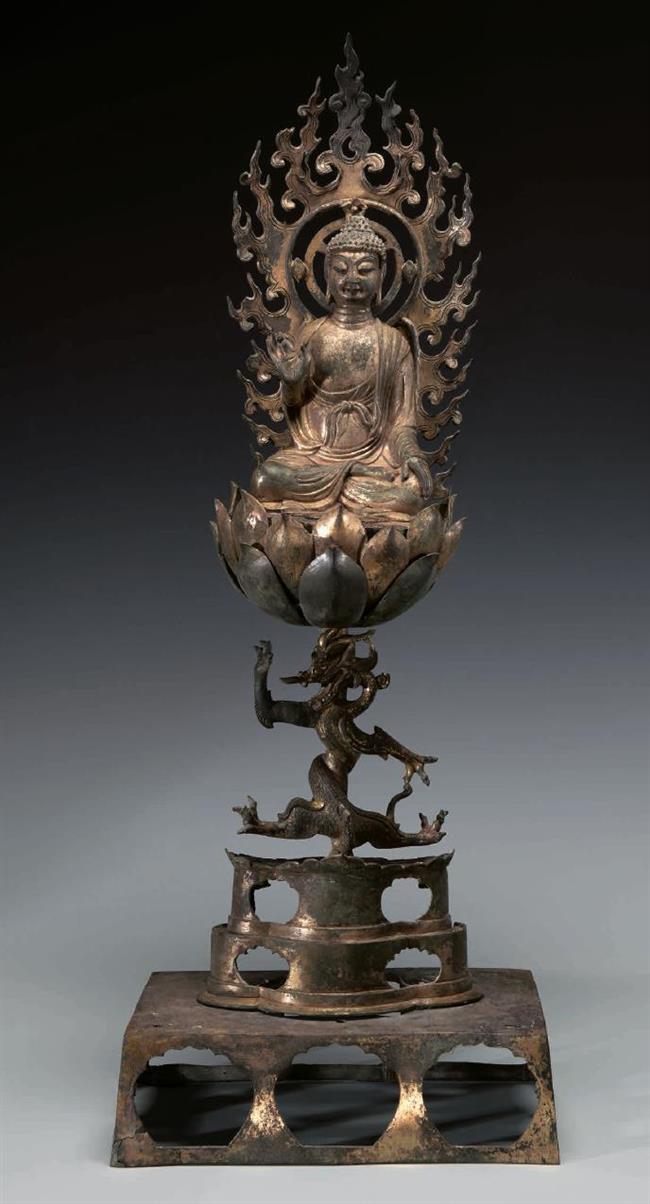 A Wu-style Buddha statue is surrounded with fire-shaped ornaments and sits on lotus flower base.

A 3D printed statue, measuring 3 meters in height and 9 meters in length, is set up at the entrance of the exhibition hall. It is replicated from the 7th statue of Yungang Grottoes in Datong City of Shanxi Province.

Yungang is an outstanding example of 5th and 6th century stone carvings. There are 53 major caves, along with 51,000 niches housing Buddha statues characterized by both northern and southern Chinese styles.

The second heyday of figurines making art was in the Tang Dynasty (AD 618-907). Exhibited Buddhist sculptures, figurines and other antiques testify to its vibrant Buddhist culture.

During this dynasty, Emperor Taizong (AD 559-649) sent the famous Xuanzang monk to Tianzhu (present-day India) to inquire about the teachings of Buddha. Hundreds of Buddhist scriptures were sent back to China, which largely contributed to the development of the religion and cultural exchanges.

Buddhism subsequently evolved into one of the country’s main religions and millions of devout believers worshipped Buddha and built temples across China, especially in Chang’an City, in what is now Xi’an City in Shaanxi Province.

Unlike the previous dynasties that emphasized on engraving costumes of Buddha, Tang Dynasty artisans focused on vivid expressions and bodylines. The Buddha of medicine in Mahayana Buddhism and Guanyin (bodhisattva venerated by followers of Chinese believers) were the main themes. 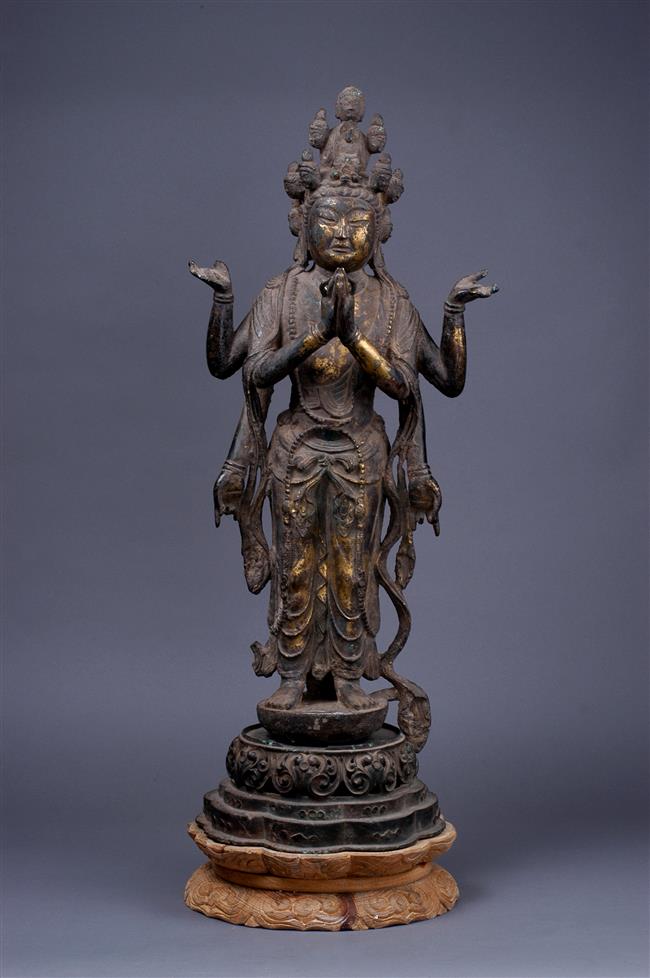 A Tang-style figurine features a plump face since chubbiness was favored over slimness then.

According to the different designs of Guanyin, the Tang-style Buddhist arts could be divided into different phases. Before the Emperor Taizong period, the sculptures were still characterized by the styles of the previous dynasty.

Between the Emperor Taizong and Emperor Gaozong periods, as chubbiness was favored over slimness then, the exhibits feature a plump face. Until Empress Wu Zetian, the sculptures had more vivid expressions and better-proportioned bodies. Bodylines were smoother and often twisted into an “S” shape.

Starting from the Tang Dynasty, extensive underground palaces were built under pagodas and temples. More ornate caskets became common, including those with gold and silver.

At the exhibition, a Tang Dynasty stone sarira casket engraved with Buddhist scriptures and floral motifs is exhibited. It was used to contain pearl or crystal-like objects that are found among the cremated ashes of Buddhist spiritual masters.

Such caskets are highly valued by archaeologists as they reflect burial practices and how Tang-style underground palaces were built.

The peak of Buddhist figurines art happened in the Wu Kingdom during Five Dynasties and Ten Kingdoms (AD 907-960), in what is now Zhejiang Province.

As many of the kingdom’s ancient emperors were devout believers, they dug caves, reproduced scriptures and erected religious buildings across the province. Therefore, Zhejiang was dubbed “southeast Buddhism country” in history.

The Emperor Qianchu (AD 907-979) built numerous sarira pagodas, which started a trend across China. Many of today’s most well-known Buddhist relic sites in Hangzhou, including Liuhe Pagoda, Yanxia Grotto, Lingyin and Jingci temples, were built during this period.

Some of Wu-style figurines retain the Tang-style chubbiness and graceful looks, while others feature a newer style characterized by simple, plain ornaments and realistic features.

A displayed copper figurine that was gilded with gold epitomizes classic Wu-style. The Buddha is surrounded with fire-shaped ornaments and sits on lotus flower base. A column twined with dragon supports the base.

Date: Through February 28, closed on Mondays 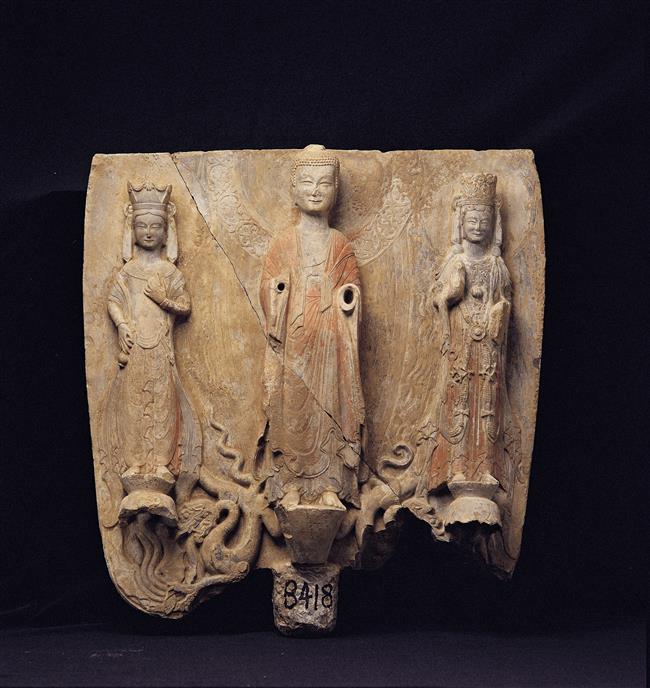 Stone sculptures from the Southern and Northern Dynasties