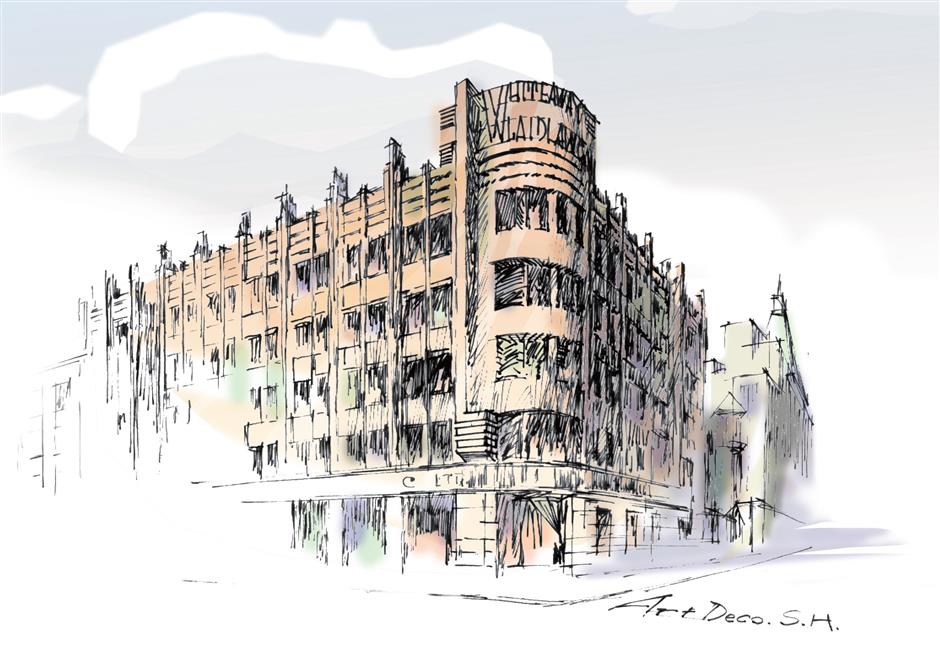 Whiteaway Laidlaw & Co Ltd was at one time the largest foreign-owned department store in modern Shanghai. — Illustration by Liao Fang 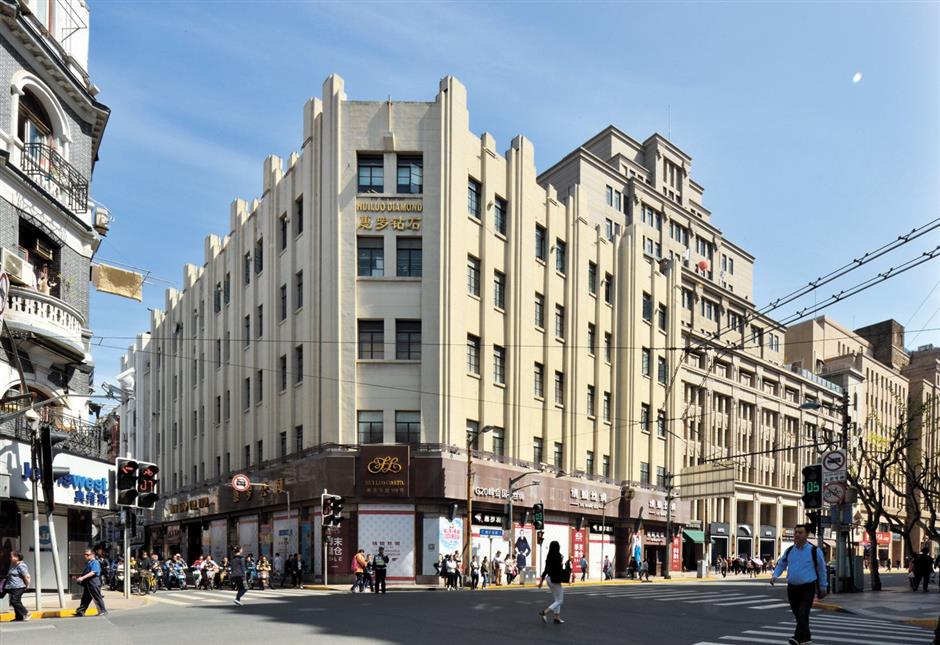 A Shanghai architect is working to bring back the past glory of a historic building on Nanjing Road E. that was gutted twice by fire.

Shen Xiaoming wants to revive the 1930s look of the former British department store Whiteaway Laidlaw & Co Ltd that was struck by fire three months after renovation in 1930 and again in 1986.

Archival materials show that a reconstruction plan for the store was published in North China Herald on August 10, 1930.

“As the originator of Shanghai retail shops, Whiteaway Laidlaw & Co Ltd was an exquisite classic building that stood on a prominent corner of Nanjing and Sichuan roads in 1906. It was renovated into a chic Art Deco building in 1930, which will be the model for this latest restoration,” says Shen.

Established in Calcutta, India, in 1882, Whiteaway Laidlaw & Co Ltd was at one time the largest foreign-owned department store in modern Shanghai.

“The store’s slogan was ‘Quality, Value, Service’ and began dealing in merchandise and importing business from 1904. The five-floor building came up in 1906,” says Tongji University Professor Chang Qing, who is also the author of the book “Origin of a Metropolis — A Study on the Bund Section of Nanjing Road in Shanghai.”

“At first, only two floors were for shops while the upper three floors were leased out to foreign enterprises and clubs. As business grew, they took back the upper floors in 1919 for more space. In the 1920s, Whiteaway Laidlaw & Co Ltd jostled with Lane Crawford & Co, Hall & Holtz Ltd and Weeks & Co Ltd as the four largest foreign-owned department stores in Shanghai,” he adds.

Chang notes that the company enjoyed a “golden era” in the 1920s and 1930s when British pound was devaluated to silver, the widely used currency in China. The company took advantage and started importing commodities from London and sold them in Shanghai for silver, which they exchanged for pounds to import European products and built its fortune. 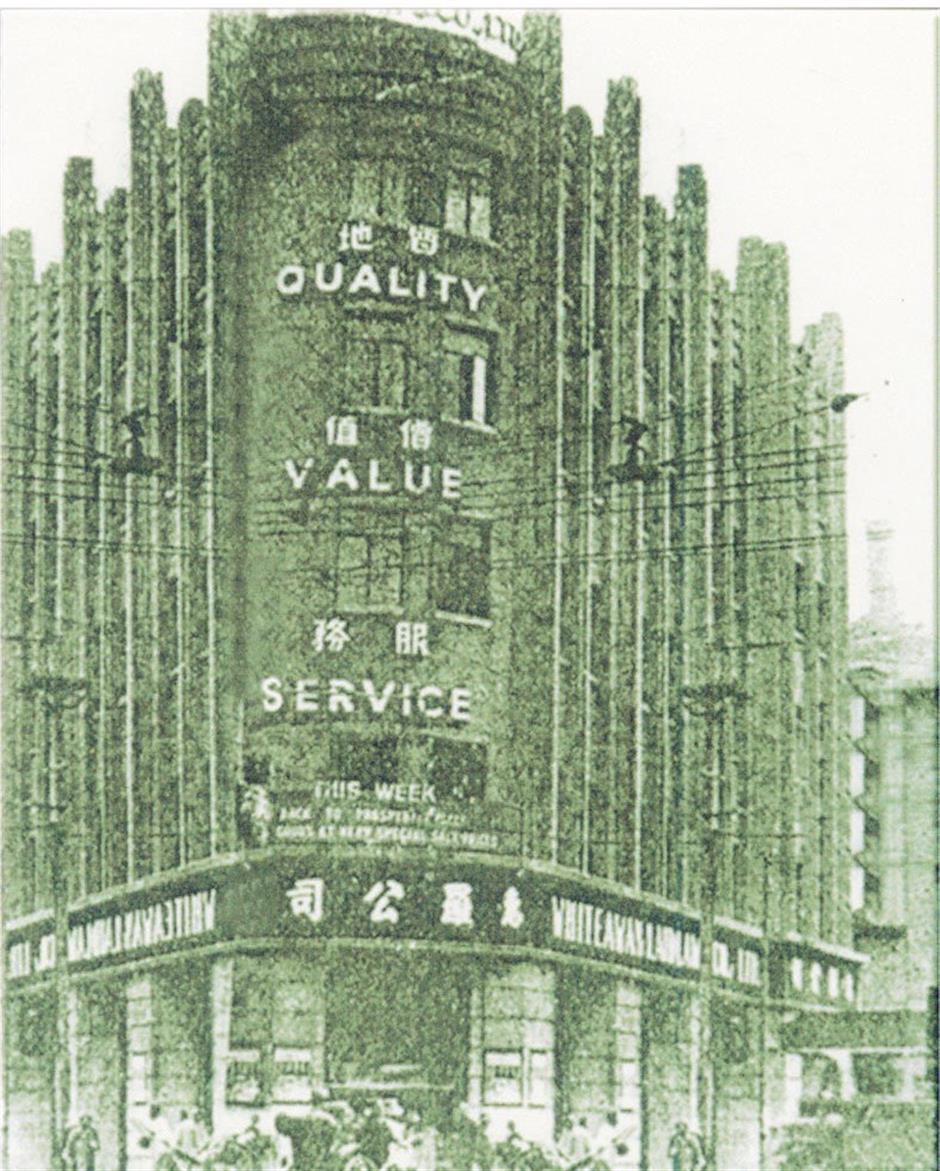 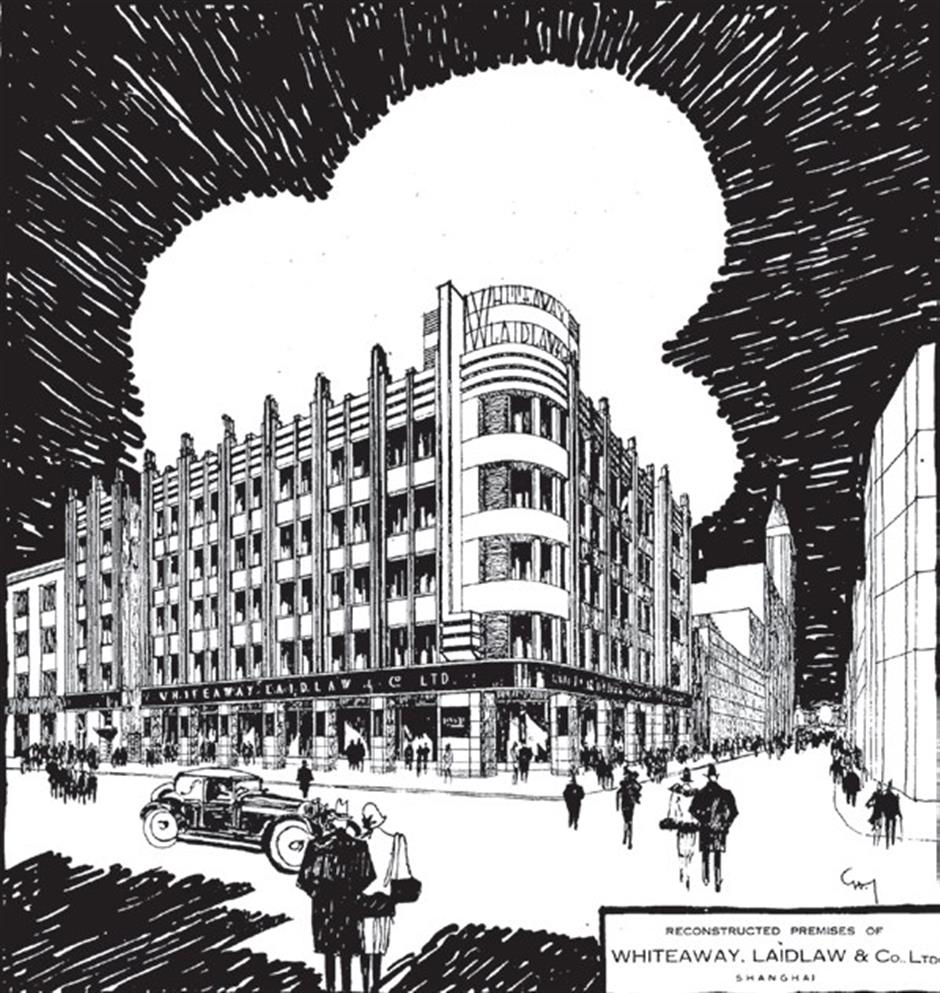 A sketch of the 1930 reconstruction of the Whiteaway Laidlaw building by C. H. Gonda — Courtesy of Michelle Qiao

“There is only one way of creating a great business of the type of Messrs Whiteaway and Laidlaw, and that is to deal fairly and generously with the public,” the visiting chairman’s opinion was reported in the 1921 article.

“One day we received a letter from a planter up-country ordering a dozen pairs of socks,” Wilkinson was quoted in the interview. “In the letter the man hoped that the socks would be of better quality than those which had been sent to him in response to his last order. So we sent him a dozen pairs for nothing,” said the chairman, who also gave other examples of the way Whiteaway Laidlaw did business.

“Generosity on this scale is bound to be rewarded, and the present status of the firm is testimony to the wise and thorough way in which the policy has been carried out by Wilkinson, his co-directors and his carefully selected managers. Time is not deemed to be wasted when it is employed in the task of completely satisfying the great public that is served by the undertaking,” the report claimed.

The success Whiteaway Laidlaw & Co Ltd enjoyed led to the big reconstruction in 1930, “which will bring the premises of this well-known emporium into line with the most up-to-date buildings of Europe.”

“For the purpose of obtaining a maximum of daylight and natural ventilation, the entire outside of the building will be changed, the masonry relieved from the out-of-date ornamentation and nearly the entire wall space opened up and provided with modern steel casement windows,” said a report in North China Herald in 1930.

“In harmony with this structural alteration, the refacing of the building will be executed along the modern lines of the architectural style which now has been generally adopted abroad. Simplicity in design, dignity and effectiveness will be the keynote of this remodeled building.”

The report says the architect was C. H. Gonda, a Hungarian architect whose works include the Cathay Theater on Huaihai Road, No. 14 on the Bund and Capitol Theater, all in ultra-modern style.

However, only three months after the report, a big fire gutted the top floor of the building and badly damaged the floor beneath, causing damage at Tls 500,000. 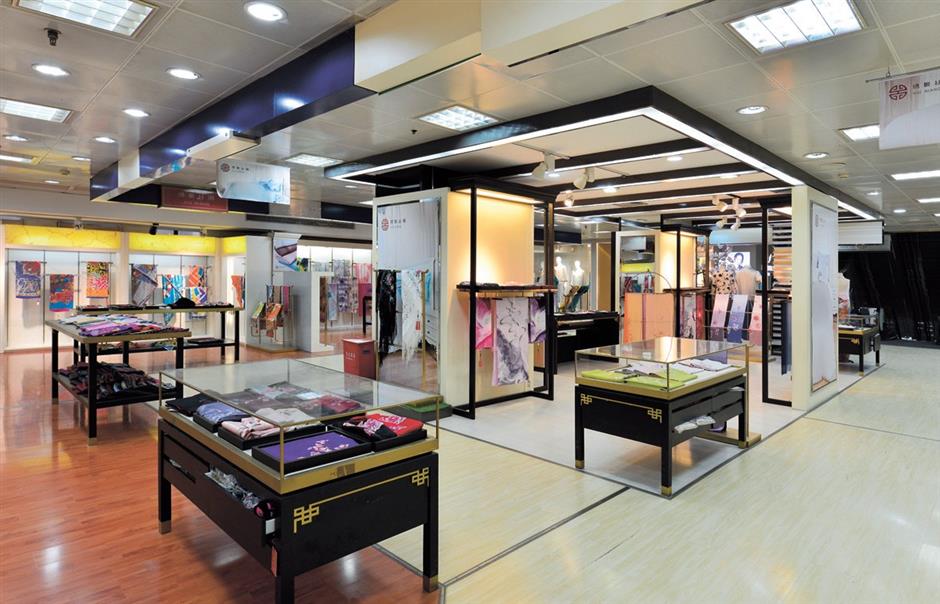 The state-owned Huiluo Co Ltd now specializes in silk products and down jackets. 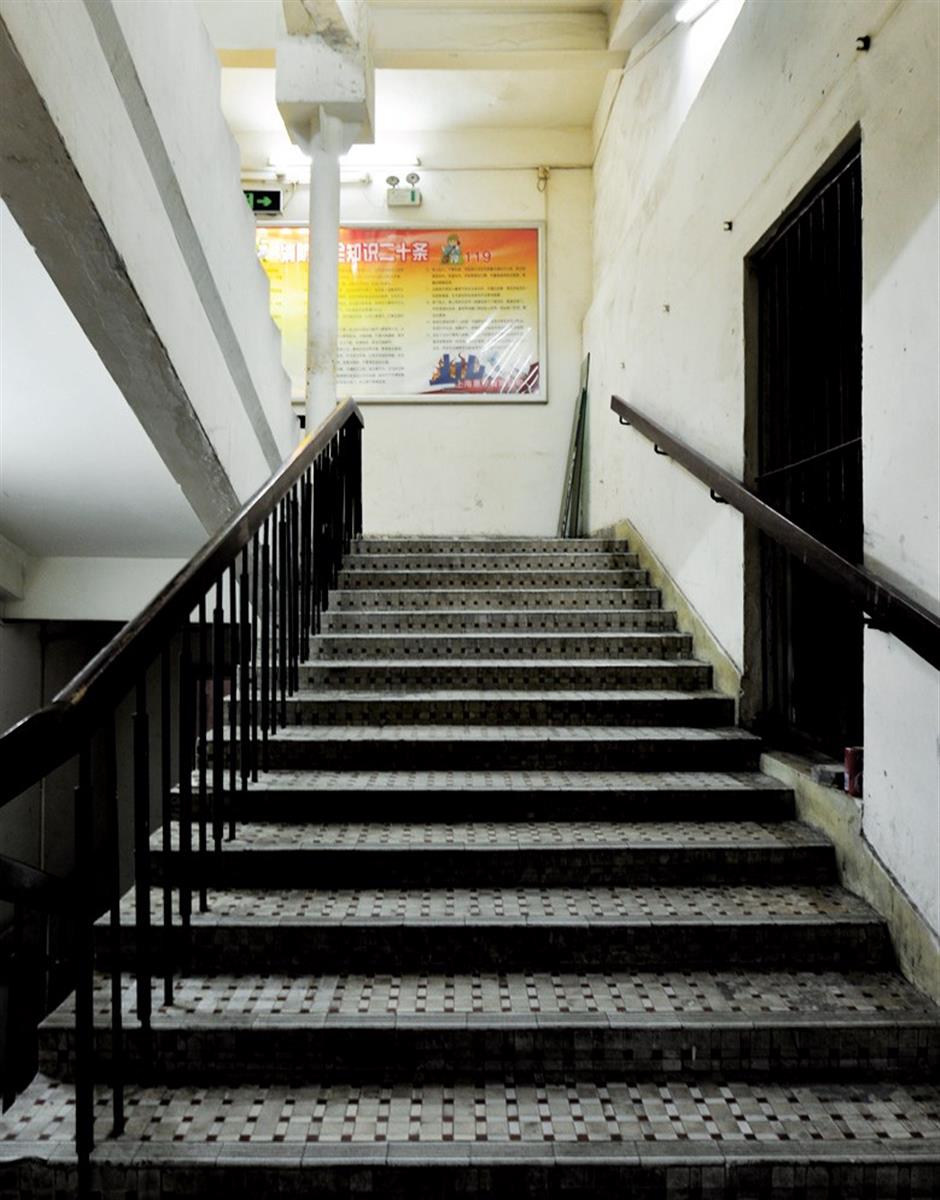 The old staircase of the century-old building has been largely retained.

The Japanese took over the building in 1941 and sent the British managers into Japanese camps.

Whiteaway Laidlaw & Co Ltd resumed business in 1945, but the “golden era” never returned after the Kuomintang regime slapped a steep import tax. In 1955, it was taken over by Chinese government and is now home to the state-owned Shanghai Huiluo Co Ltd.

“For a long time Huiluo was famous for hosting an exposition themed in down jacket from September to March every year. Our silk products are popular among tourists,” says Zou Xiaomin, general manager of Huiluo Co Ltd.

“But we now face fierce competition from online shopping. Hopefully, the new brand, Xiuniang Silk from Suzhou, will attract younger customers,” he says.

According to architect Shen’s research, the Whiteaway Laidlaw building had a beautiful arcade and was decorated with Art Deco elements, curves and simple, geological lines in the 1930s.

Even the shop signs on the façade were written in Art Deco style.

“The building was perched on such an advantageous location — very bright in the morning and sunlight penetrating from the southern side at noon. In the afternoon, sunlight from the Western side made the arcade warm and cozy,” he says.

But disaster struck again when another big fire destroyed much of the Art Deco building in 1986.

“At that time the value of the historical building was not fully recognized, so a lot of architectural details were not restored and the original plaster façade was simply coated by paint. Today it is hard to imagine how chic and modern the building had been during its ‘golden era’,” Shen says.

The architect successfully persuaded the building’s new tenant, Xiuniang Silk from Suzhou, to use some of its advertising budget to invest in the restoration project, which is now under government evaluation. Hopefully it will bring back the past glory of the time-honored department store.