An exhibition titled “Post Contemporary Urban Graphics 7019” has brought street art to a museum in the city.

Examining the contemporary zeitgeist from a new perspective, the exhibition, which runs until April 24, addresses issues of urban humanism and street culture.

A subculture that first thrived on the streets of New York, street art has become an important artistic expression of modern life. In most cases, it dealt with modern issues in colorful images and striking texts that caught the attention of passersby. It quickly became an important part of global popular culture, sweeping through cities around the world.

Coming of age during the 1970s and 80s, the eight artists have a shared background in popular culture.

Shanghai Daily caught up with Alexandre Farto (Vhils) to find out what inspired him to take to street art.

Farto has been interacting visually with the urban environment under the pseudonym of Vhils since his days as a prolific graffiti artist in the early-to-mid-2000s.

Growing up in Seixal, an industrial suburb across the river from Lisbon, the capital of Portugal, he was deeply influenced by the transformation brought about by the intensive urban development in the country between the 1980s and 1990s.

Farto was particularly inspired by the way city walls absorbed the social and historical changes that took place around them. Applying his original methods of creative destruction, Farto dug into the surface layers of material culture like an urban archaeologist, exposing what lied beyond the superficiality of things, making visible the invisible and restoring meaning and beauty to the discarded dimensions buried beneath.

His ground-breaking bas-relief carving technique, which formed the basis of the Scratching the Surface project, was presented to the public for the first time at the VSP group exhibition in Lisbon in 2007, and at the Cans Festival in London the following year. His style has been hailed as one of the most compelling approaches to art created in the streets in the last decade.

His unique approach and artwork garnered critical acclaim around the globe. Since 2005, he has presented his work in over 30 countries in solo and group exhibitions, site-specific art interventions, artistic events and projects in various contexts.

Q: What is the charm of graffiti in your eyes?

A: For me, working in the public space is an opportunity to work directly with the city, a way of contributing to the well being of its citizens while helping to embellish the environment they live in.

As you’re working in a visually saturated environment you have to create a big impact, while also working faster and with less attention to detail, but I have always liked this challenge. It is also more thrilling than working in the studio.

I believe that working in the city opens up discussion and interaction with the public at large, especially those who are not in the habit of visiting galleries and museums or lack the opportunity to do so. Painting in the street can be very positive for the people while making the city a more inspiring and interesting place to live in.

Q: What initiated you to use facial features in your creations?

A: When I started exploring a more figurative line of work I became fascinated with what a face can tell us about a person and where they come from. It’s all about human identity. This is one of the main reasons why I like working with portraits.

Over the years my work evolved into this reflection on identity, especially in connection with contemporary urban societies exposed to a model of globalized development that is making the world an increasingly uniform environment. The objective is also to try to humanize the overbuilt urban environments most of us live in today. Some portraits are composites created by blending portraits of different people, but the majority depict real people I have met.

In some of the larger projects, especially those involving a community, this involves getting to know them, sharing experiences, listening to their stories and concerns, photographing them in their environment and then carving their portraits in a place they have a particular connection with.

In other cases, I might walk around the streets when I arrive in a city and simply ask people if I can take their photo. I explain to them what I want to do with it and ask them a few questions. Even if it’s a short conversation, I always like to have a sense of who this person is, where they come from, what they do, what they like, but also if their city and culture has changed much over the years and how, things like that.

Q: How do you like the idea of showcasing graffiti in an art museum instead of on the street?

A: There are definitely some conceptual and even formal connections between what some street artists do and the language of pop art, as they focus on examining the impact of popular culture on society. But this depends on the artist.

I believe that the purpose of this exhibition is precisely to show works by artists who started out painting in the streets and then developed their work to explore other art forms. Some still paint graffiti in the streets while doing studio work at the same time.

In my case, what I do today is no longer graffiti, even if my work uses some of the same tools, techniques and even some of its visual language.

An exhibition like this one helps clarify this issue for the public, to help them understand the vitality and diversity of the movement. What it also shows is that art is art, regardless of the context in which it’s being created or presented.

Q: I hear that you have been doing a series of projects and exhibitions in China. Can you elaborate a bit on them?

A: I’ve been visiting and working in China since I first came here in 2012.

The first time I was invited to do a residency and a solo exhibition at the Magda Danysz Gallery in Shanghai, and spent two months working in the city which was a very positive and interesting experience.

I returned to Shanghai for other projects over the years, including creating a few murals in the city.

In 2015, I opened a second, smaller studio in Hong Kong and lived there on and off for long periods during the next three years.

I created a mural on the fa?ade of the Portuguese embassy while taking part in a group exhibition titled “Art From the Streets.”

Last year, I also co-curated a series of six exhibitions in Macau that sought to establish a dialogue between artists from China and the Portuguese-speaking nations, and this was a very interesting and rewarding project.

Q: How do you adjust your work in harmony with the environment, or in each location?

A: Working in different locations and contexts offers different challenges, but the basic approach is very similar.

The contrast between similarities and differences — between materials, between locations, and between peoples — is one of the main subjects I have been exploring in my work.

I try to work directly with the city itself and its people, always in dialogue with the local environment. This is a way of reflecting on the particularities of that location.

Q: What is your most unforgettable creation?

A: All projects have their special significance, mostly because you’re working with people who are dealing with real-life issues and it feels good to help them in a very modest way. But placing a piece on board the International Space Station in 2015 was a very challenging and out-of-the-ordinary project. 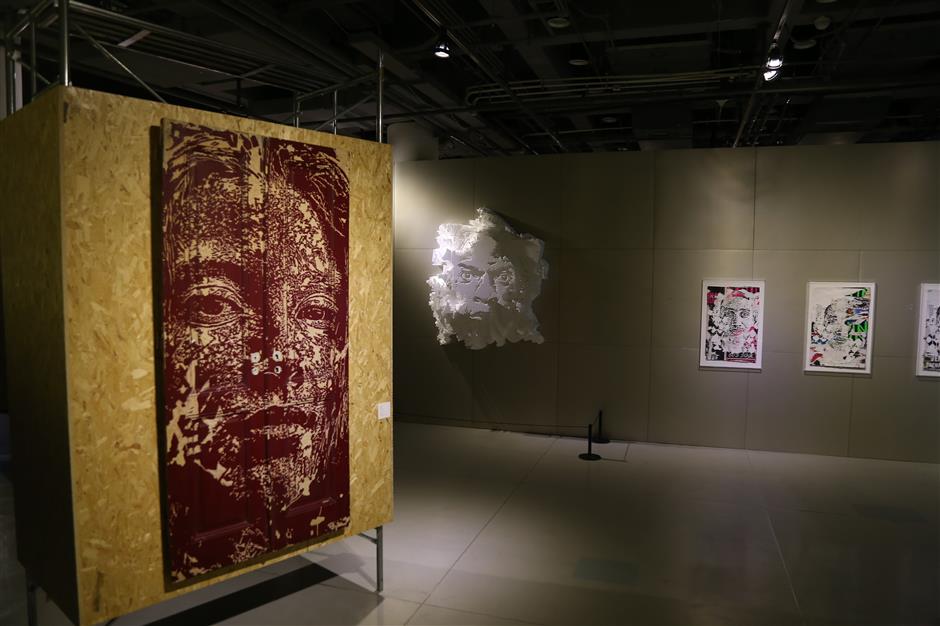 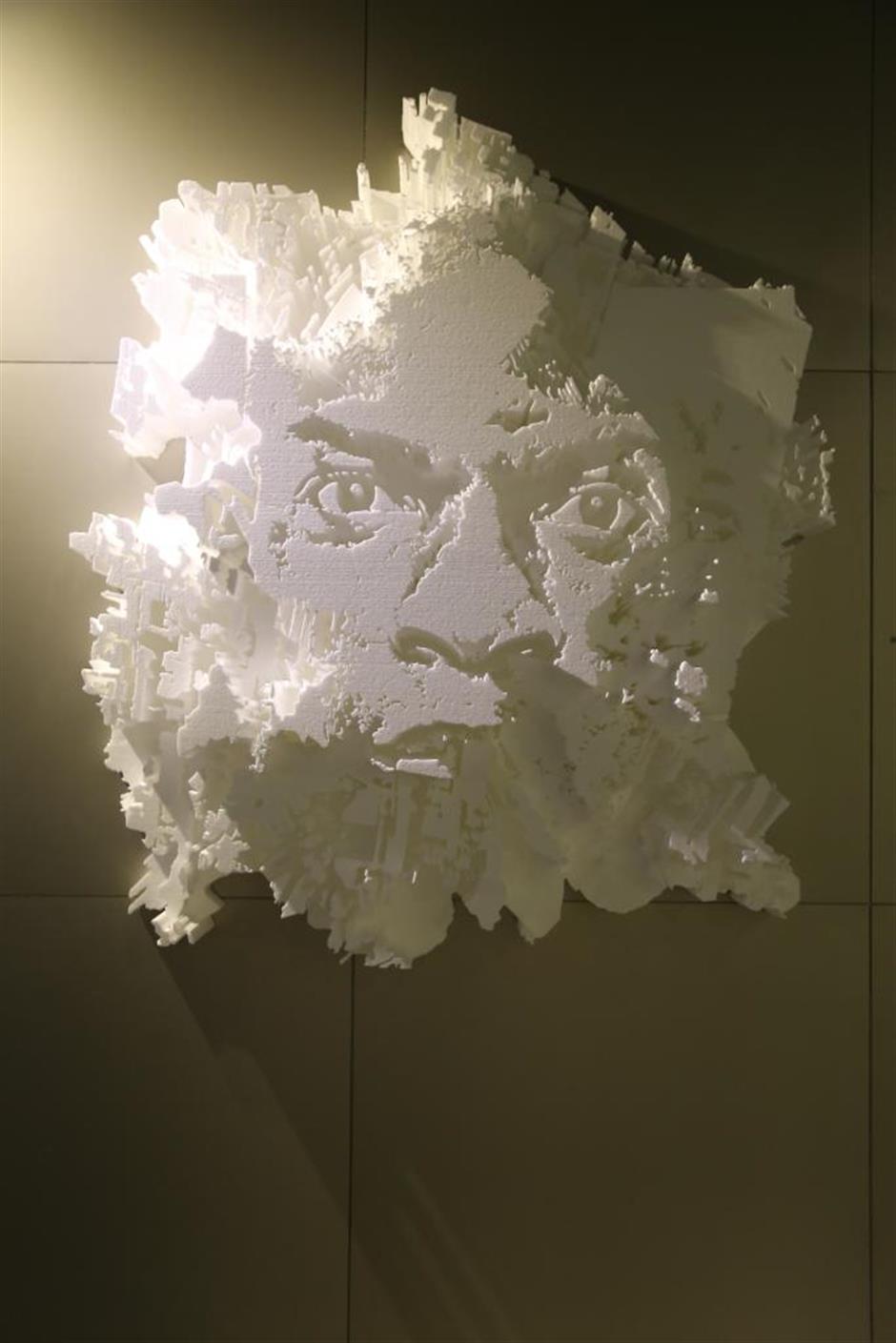 A facial sculpture by Alexandre Farto on display in Shanghai.