“This is a strange house built on a deformed site which made it very hard to arrange the layout,” Luke wrote in an article in the 1936 journal “The Chinese Architect.” 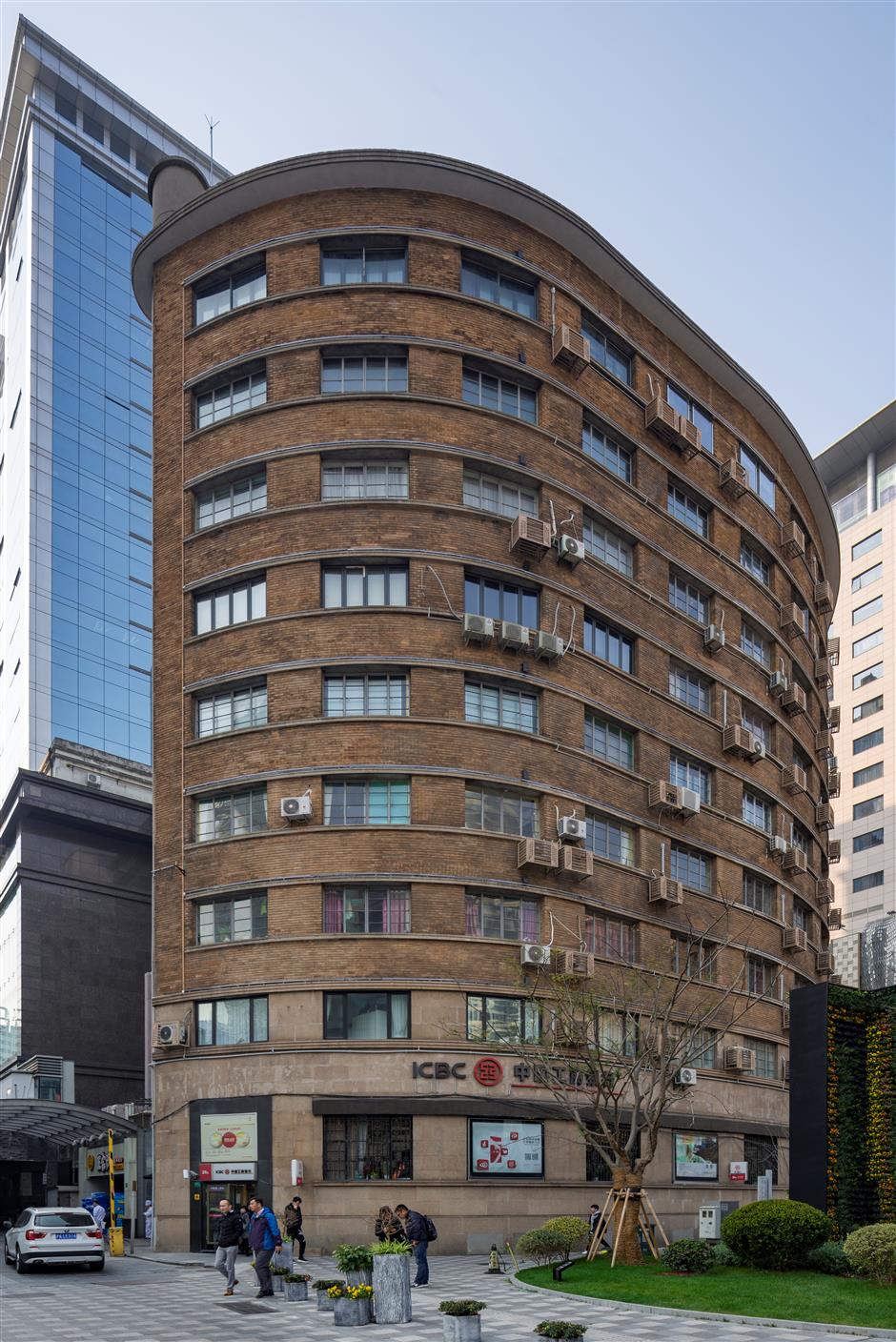 Standing on a narrow plot alongside Nanjing Road W., the Yates Apartments is coiled into a tight curve at the southern end.

It was the second Shanghai branch the Hong Kong-born architect designed for the Bank of China. The first one, the Hongkou branch, was a similar architectural challenge. The two buildings were both built on a slender, irregular strip of land and had to accommodate banks on the ground floor and apartments above.

“Both buildings demonstrated the architect’s accurate use of the land. On the narrow 100 square meters’ site, Luke, who headed the Bank of China’s architectural department, created a space of up to 1,000 square meters for use,” said Tongji University professor Zheng Shiling in a lecture about the city’s 1930s buildings. 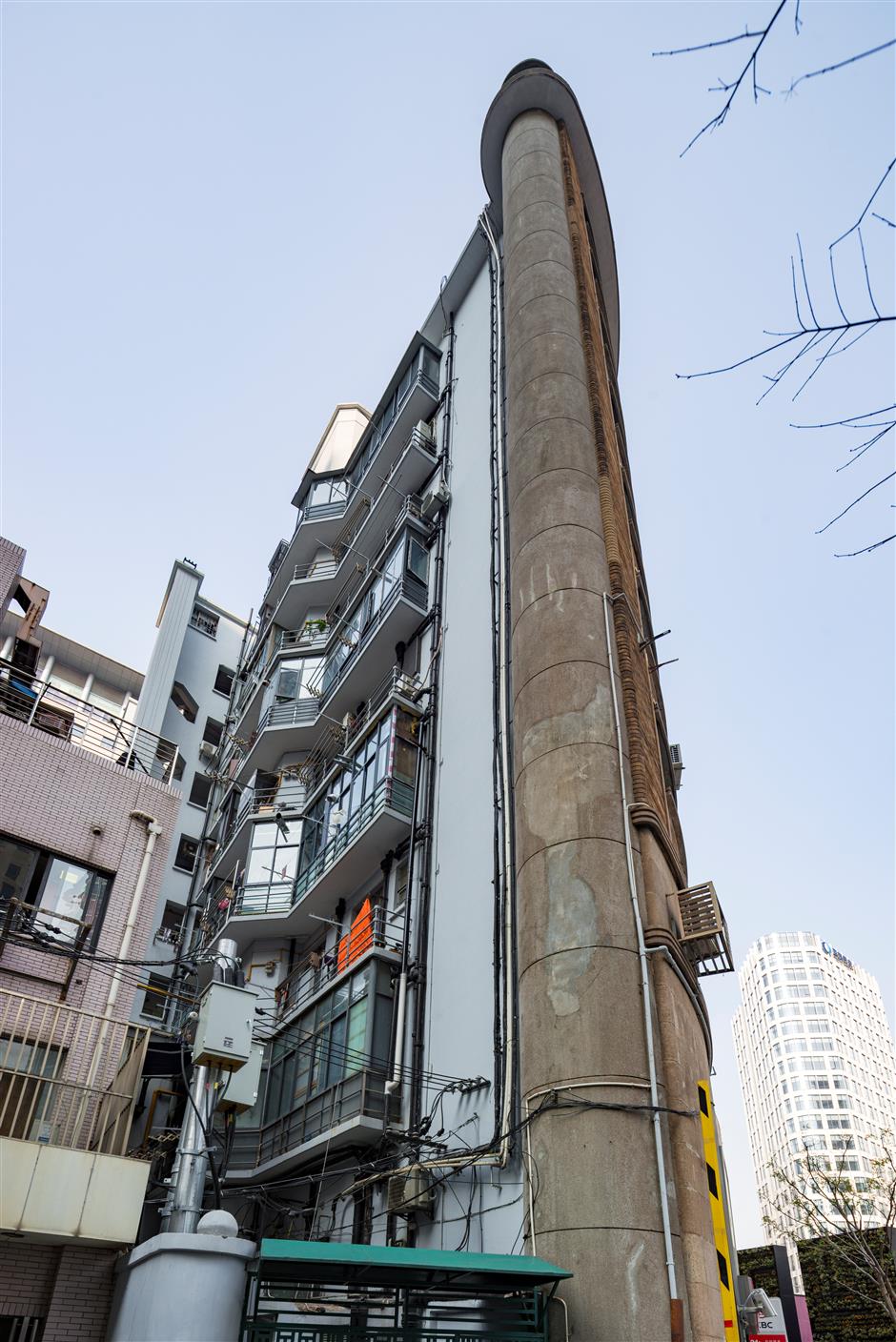 The apartments on the upper eight stories can be seen from the other side of the Yates Apartments.

He explained that several similar high-rises were built in that era because land prices were so expensive. The purchase of the Yates Road site was big news and made the North-China Herald because of the site’s cost.

“Property in Hart Road (today’s Changde Road) shows a higher figure, taken at sellers’ values. Offers to sell certain parcels here have been made at Tls. 30,000 per mow. These figures, however, pale into insignificance when the price for the site at the western corner of Bubbling Well Road and Yates Road is mentioned. Situated next to the Cathedral School for Girls, the piece of ground is only half a mow in extent, but, as stated, it is a corner site. And a sum of Tls. 63,000 was paid for it,” the North-China Herald reported on May 13, 1930.

“The Yates Apartments building with banking space on the ground floor was built on a narrow land on the corner of Yates Road, so was called Yates Apartments,” Luo wrote.

“The bank opens to Nanjing Road, and the apartments on the upper eight stories can be seen from the other side. The main fa?ade of pale ochre tiles, follows the line of roads, forming an interesting curved wall with strong horizontal lines.” 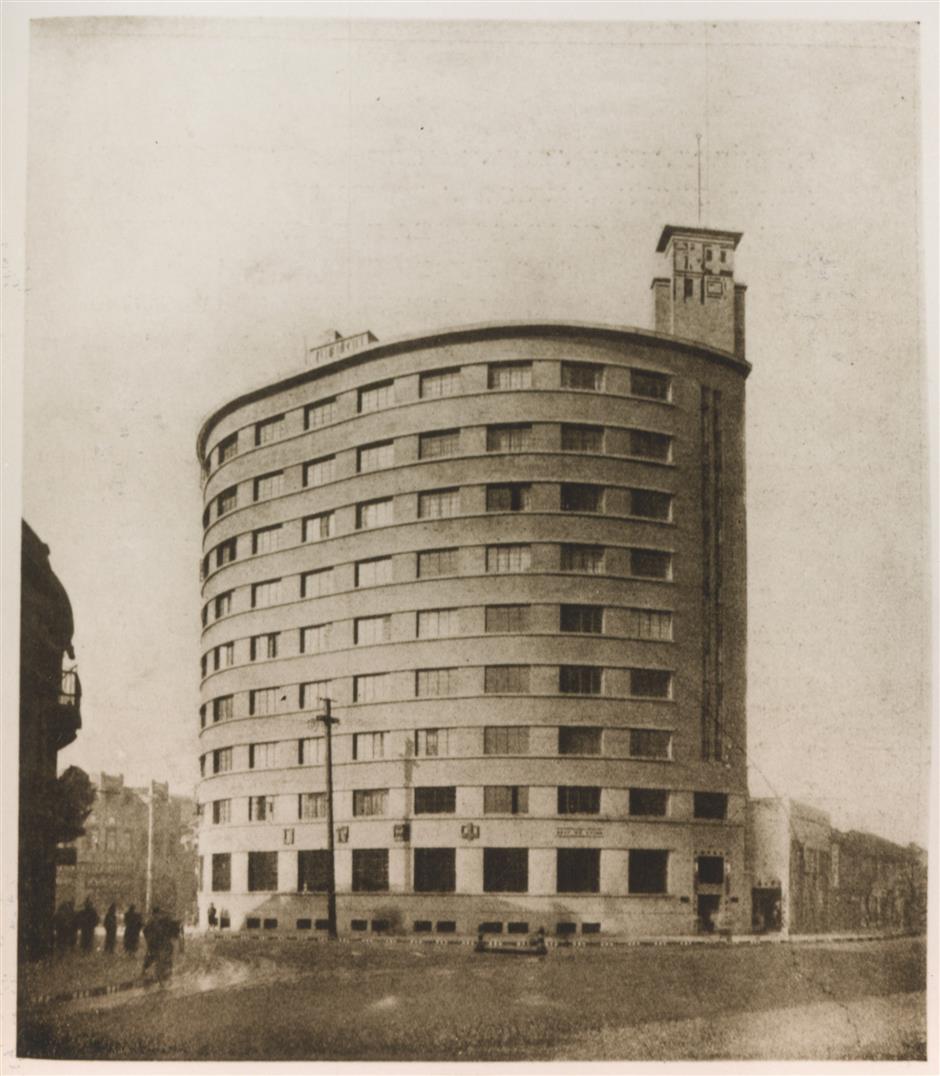 British architectural historian Edward Denison discovered a similar style used by Luke in the Yates and Hongkou branches. In both buildings, the separation of function is apparent in the fa?ade. The ground and first floors used as banks are faced in stone, while bricks are used throughout the rest of the fa?ade.

“At the southern end he coiled the facade into a tight curve, like a Chinese scroll, the core of which forms a short cylindrical tower projecting above the cornice. One of the bank’s two entrances stands at the base of this coiled corner, decorated with iron grilles, metal lighting brackets and circular steel motifs framing the doorway. At the north end the treatment of the fa?ade is more prominent and reveals the building’s intricate interior arrangements. The lines of horizontal windows half abruptly at a pair of slender vertical glazed strips that light the stairwell and lift shaft for the seven storeys of private apartments,” Dension wrote in his co-authored book “Luke Him Sau Architect—China’s Missing Modern.”

According to Luke’s 1936 article, each of the upper floors contained three sizes of apartments: four, three and two bedrooms. These apartments were later criticized for their small space. But Luke defended himself by pointing to the narrow plot and stated “the rooms were actually not so small for use.” 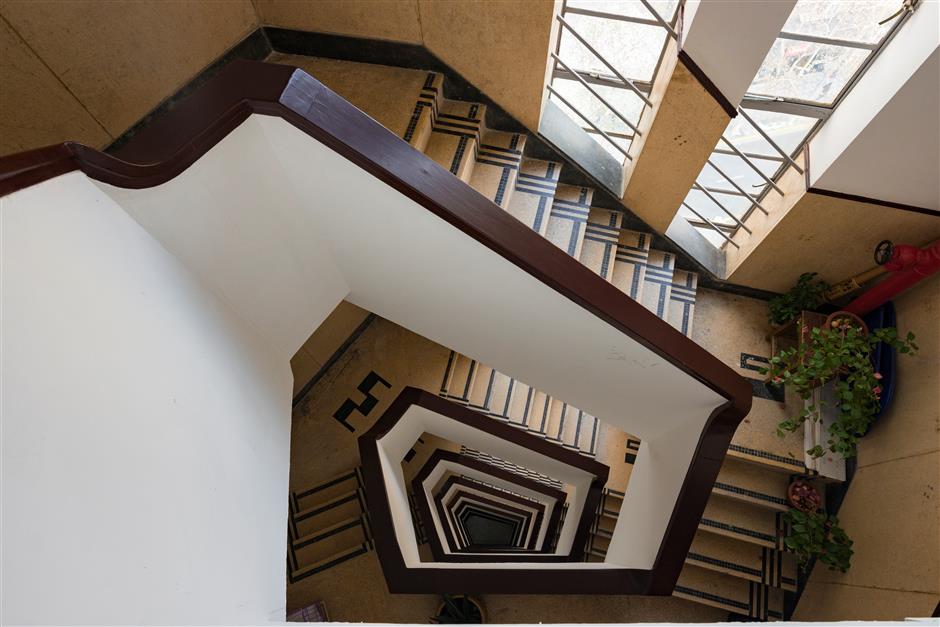 From the winding stairs, one could easily get the general layout of the building.

Luke was one of the first-generation architects in modern China. Born in Hong Kong, he had studied at the Architectural Association School of Architecture in the United Kingdom. In 1929 Zhang Jia’ao (Chang Kia-ngau), the then Bank of China’s Vice President, met Luke in London and offered the 25-year-old architect the post of heading the bank’s architectural department.

Luke then denied his father’s request to return to Hong Kong to inherit the family business and headed to Shanghai.

In the following decades, Luke was responsible for building a variety of Bank of China projects, ranging from banks, offices, residences to warehouses all over China. Among them, the most noteworthy was the Bank of China building on the Bund, a modern Art Deco structure with strong Chinese elements which he co-designed with Palmer & Turner. 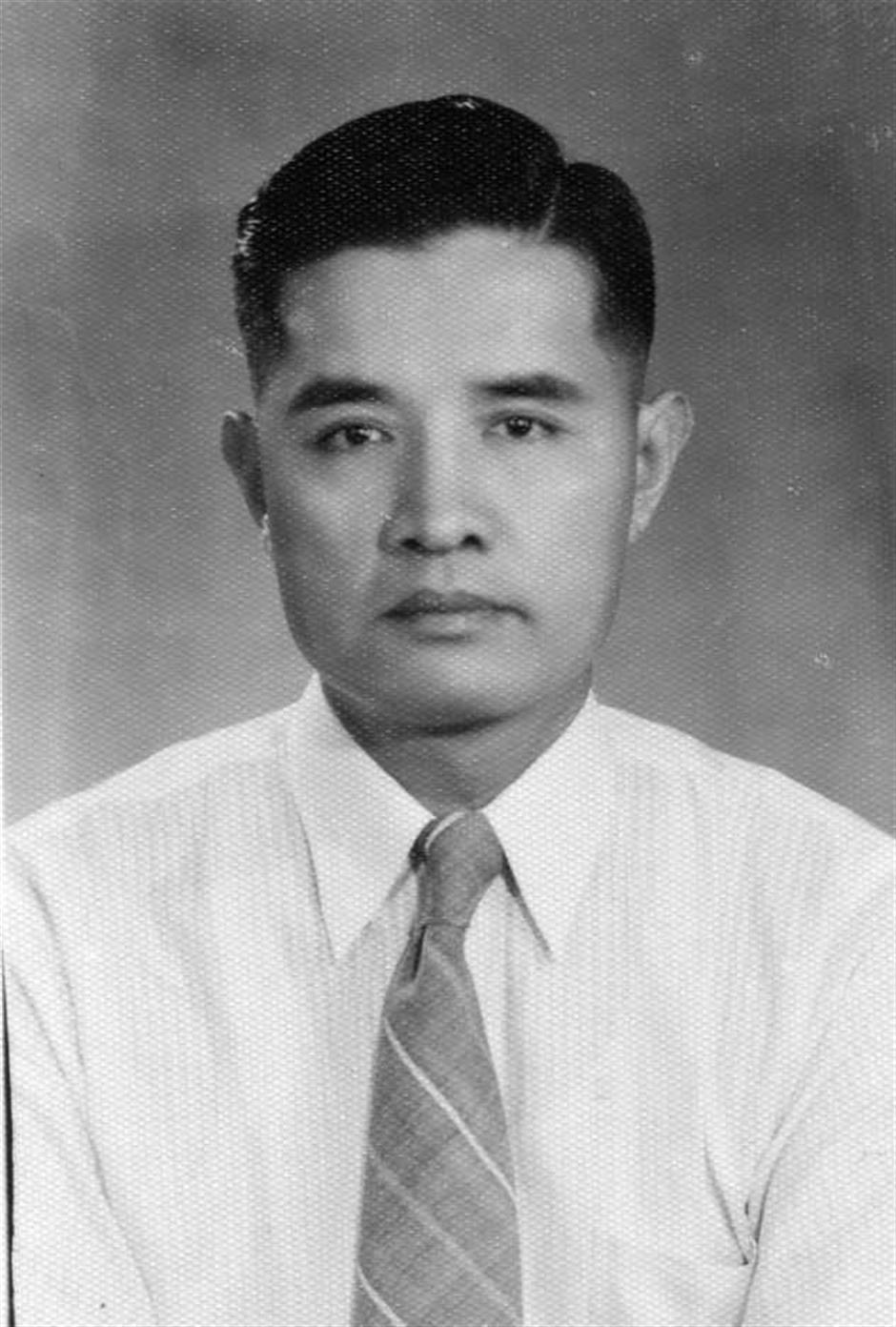 In another lecture last year, professor Zheng Shiling said many of Shanghai’s historical buildings are the work of China’s remarkable first-generation architects, including Luke. Other examples on the former Bubbling Well Road included the Paramount Dance Hall by Yang Xiliu and the Majestic Theater by Fan Wenzhao, which will be introduced later in this column.

He explains that traditionally the profession of “architect” did not exist in China — only craftsman. But things changed after several Chinese students studied architecture overseas and returned around 1910 and kick-started a building boom.

When Chinese students returned with overseas architectural degrees, they joined foreign architectural enterprises or later opened their own companies like the Allied Architects. But Luke was exceptional among them as he became a full-time architect employed by a Chinese bank.

Luke co-designed a large amount of architectural projects with his long-time Bank of China partner, Wu Chauncey K. (Wu Jingqi), a Chinese architect who had studied in the University of Pennsylvania.

In the late 1940s Luke returned to Hong Kong, where his old family house was demolished during World War II and his father had passed away. He had to start a career all over again.

“Despite this, Luke told his son he never regretted his years working in China’s mainland. As a young man, he designed many projects and participated in Shanghai’s urban planning work and even some state-level projects. Though he designed quite a few hospitals, churches and high-rises later in Hong Kong, he valued his career more in the mainland from 1929 to 1949,” says Wang Haoyu, a PhD researcher and lecturer from Jiao Tong University who had interviewed Luke’s descendants and wrote a research paper about this architect.

“Luke added ‘Hua,’ an abbreviation for China, in his grandchildren’s names.”

In 1936, two years after the completion of Yates Apartments, Luke and Wu co-authored a famous article in the journal “The Chinese Architect” named “Our Proclamation.”

Tips: Admire the building’s accurate use of the narrow site. Through a green iron gate on Nanjing Road W., which serves as the entrance to the apartments, you can appreciate a stylish staircase. 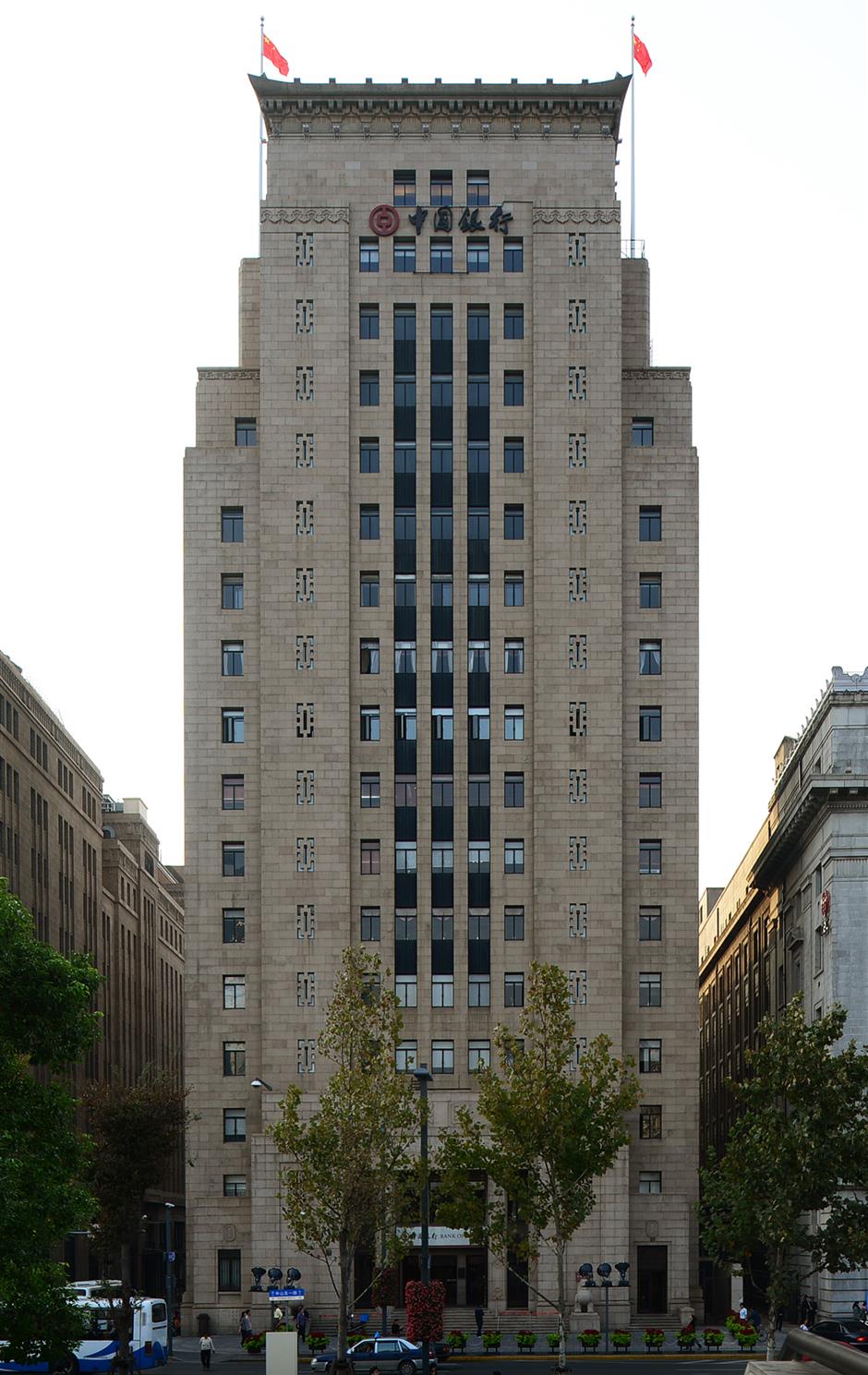 No.23 on the Bund now houses the Shanghai Branch of the Bank of China.

East meets West at Art Deco building No. 23 on the Bund

No. 23 on the Bund, the Bank of China building, stands out as a rare example of Chinese Art Deco, dominated by a range of Western-style architecture. The East-meets-West building was also an East-West cooperation co-drafted by George Wilson of Palmer & Turner and British-trained Chinese architect Luke Him Sau, or Lu Qianshou.

Completed in 1937, it is the only heritage building on the waterfront that the Bank of China invested in, co-designed and adorned with abundant Chinese elements. The structure is a Western Art Deco skyscraper graced by Chinese elements inside and out, such as lattice windows, cloud patterns and an overhanging Chinese roof of glazed tiles supported by stone dou gong — typical Chinese supporting brackets.

The white building was originally designed to stand 34 stories high, which would be China’s tallest building at the time. But the plan had shrunk drastically to a 17-story structure, which remained one of the most famous myths lingering on the Bund.

The Bank of China was founded in 1912 by the Kuomintang in Shanghai as the continuation of the former Da Ching Bank, the Qing Dynasty’s (1644-1911) royal bank, which closed soon after the 1911 Revolution.

Initially, the Bank of China used the Da Ching Bank office at 50 Hankou Road in Shanghai. The bank’s head office was formally established in August 1912 in Beijing where it remained until 1928 when it was moved back to Shanghai to the Club Concordia at No. 23 on the Bund.

As the bank expanded swiftly along with Shanghai’s booming economy, the club building could no longer accommodate all the business.

“The power of the Bank of China could compete with American and European banks. We had to build a new-style building to symbolize the modernization of the bank, to showcase our solid foundation and superb credit to China and the world,” the bank’s president Zhang Jia’ao (Chang Kia-ngau) said at the time.

The original and ambitious blueprint called for a powerful, soaring structure, similar to the American Radiator Co Building in New York.

It would have towered over the neighboring Sassoon House, and its owner Sir Victor Sassoon is believed to have influenced the Shanghai Municipal Council to deny a building permit.

The record of a bank meeting in 1934 indicated that top managers were concerned the council might oppose the height. But other documents showed that Shanghai’s declining economy also led to the reduction of floors.

And if the “dominant” skyscraper had been built, its height and impeding style would have ruined the harmony of buildings along the Bund. The revised plan co-designed by Chinese architect Luke was a better one, which has added more Chinese characters for this Chinese bank and looked compatible with its neighbors on the Bund.