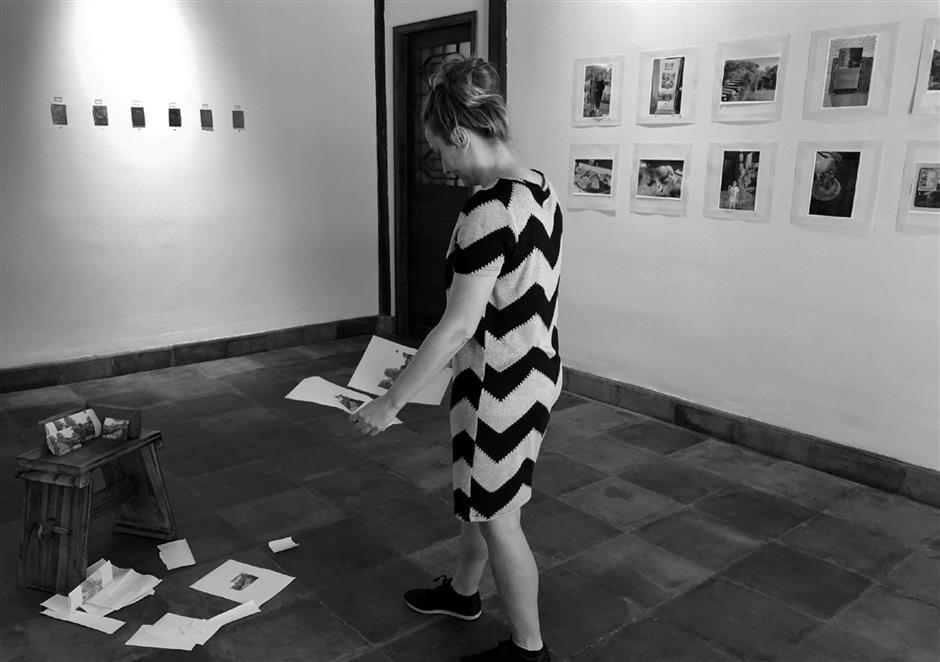 Kim Engelen works on her art creation at her studio in Meihuazhou, Jiaxing City.

After a successful run with her “Sun-Penetrations” exhibition at the Luck Art Festival, contemporary artist Kim Engelen now wants to build bridges.

The “Sun-Penetrations” exhibit in Hangzhou saw the Dutch-born artist capture beams of sun penetrating through windows, doors, curtains and cracks into an inner space. The 45-year-old photographed them to present a feeling of loneliness and the visual beauty that lies in this raw emotion. Most of her works are half-dark, calm and abstract images with the emphasis on a bright sunbeam.

“I work with the feeling of loneliness. I can’t make it go away. The feeling is there sometimes. But if I can really feel it, see it, work with it, then perhaps I can turn it into something beautiful that can make the viewer feel calm and comfortable,” she told Shanghai Daily. 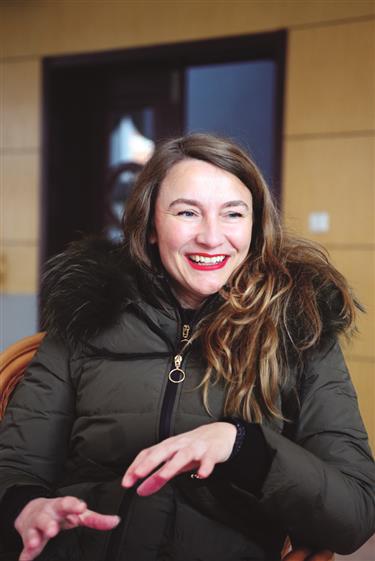 Kim Engelen is a contemporary artist.

Engelen does engage in social-oriented performances, video and smartphone photography. Her themes are centered on communication and self-development. As an artist for almost 20 years, she has worked and lived in six countries — the Netherlands, Spain, the United States, Sweden, Germany and China.

She now lives in Hangzhou and is working on her ongoing art project “Bridge-Performances,” which started 10 years ago. Engelen visited a myriad of bridges around the world and invited strangers to be part of the art. Notable bridges in the project include Ponte Sant’Angelo in Rome and Waibaidu Bridge in Shanghai.

“To me, the bridge symbolizes freedom and is a wonderful tool to work with. It stands as a metaphor for connection, process and transition,” she said.

In Hangzhou, she did a bridge performance called “Empathetic Walking Panel” on the Broken Bridge. A drone video camera was used to film the bridge from above, during which she asked expats questions.

“A bridge is a platform for expression,” she added. “People always play the central role in my work. I exchange with people when artwork is progressing, with the focus on intrinsic world and the inner strength of the individual.” 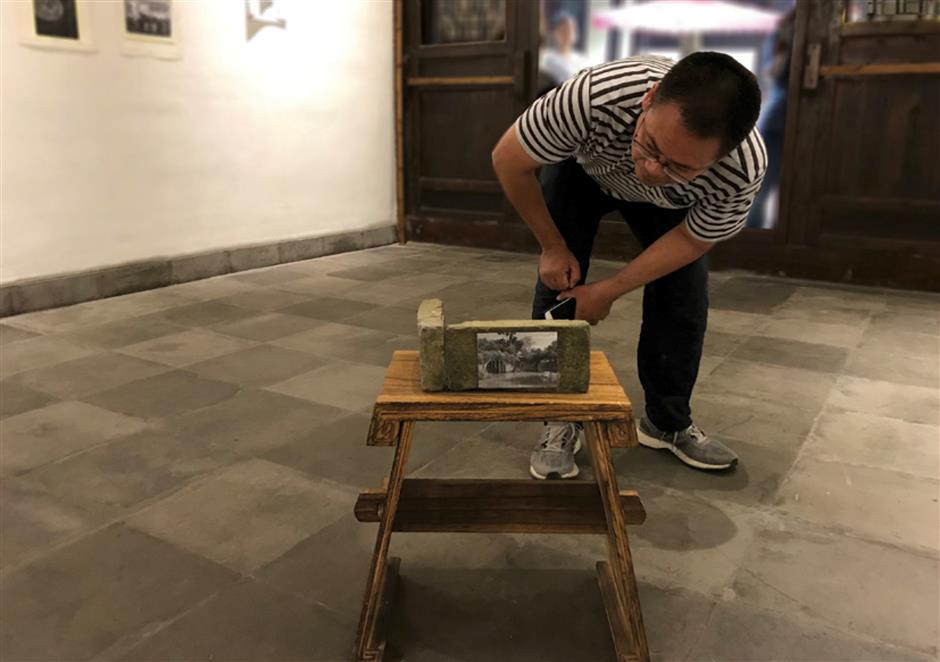 A visitor takes a close look at an art piece themed on the Sanbu Liangpan Bridge.

The exhibition space was also her studio, where people walked in freely to see her create and design on site. She created one new artwork every day.

“By working with the Sanbu Liangpan Bridge that is more than 1,000 years old, I could make meaningful connections with people. I felt there was a mutual and respectful exchange, a sort of helping each other to understand each other,” she said.

Engelen used abstract and realistic artistic techniques to embody her love for the symbolic meaning of bridges and her aspiration for beautiful things.

She displayed two stones she had found near the Sanbu Liangpan Bridge and placed them together in an L-shape, resembling the design of the bridge. On the stones, she glued four black-and-white photographs showing the bridge from different perspectives. Engelen named the artwork “Perspectiefwisseling,” which literally means “exchanges of perspective” in Dutch.

She said her artwork rose out of her own shortcomings in connecting with others. To some degree, she tries to communicate with people through her art.

“I am not sure if I can use art to make up for my shortcomings. But I do work with them and I don’t hide or mask them, so I try to show emotions honestly. Going through them might help me grow,” she said.

“More positively speaking, my works are about self-development, critical thinking and humanity. From my point of view, art is an effective way of communication.”

Engelen is also working on her art book “Private-Mini-Exhibitions.” She has started two new photographic series: “Waiting Groups,” showing modern traveling around China, and “I Am Done,” recording finished dinners.

While living in Hangzhou, she once taught art at Jiangnan Experimental School for a year. She designed 15 art lessons themed on Western modern art.

“I felt free to create my own syllabus at the school. At the moment I am turning my art classes into a book for kids. It will be completely bilingual and has an English-Chinese word list. I believe even the adult learners can enjoy the Western modern art in this book,” said the Dutch artist. 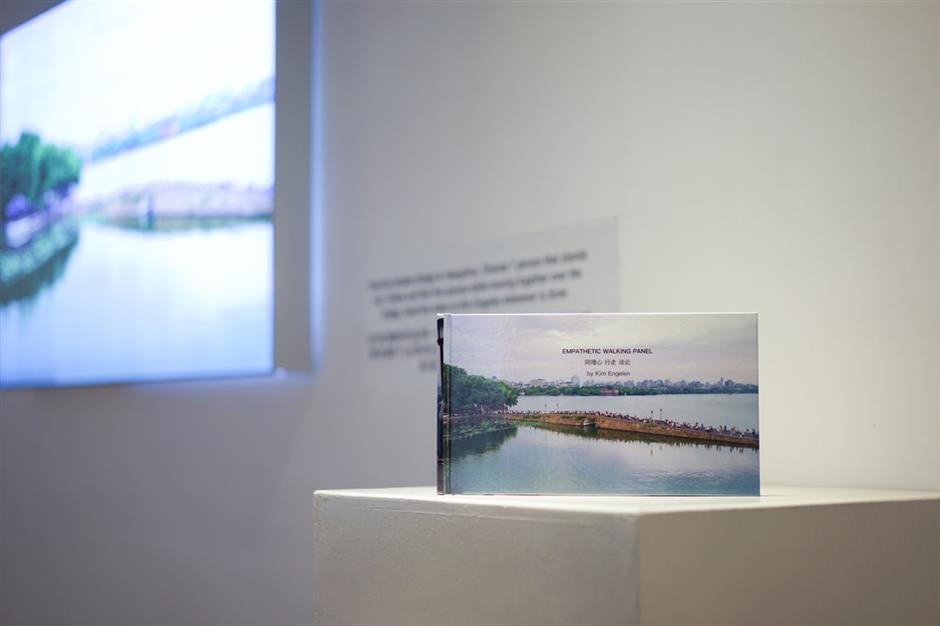 Kim Engelen does a bridge-performance called “Empathetic Walking Panel” on the Broken Bridge.