Traditional inksticks and the backstories of their ancestry 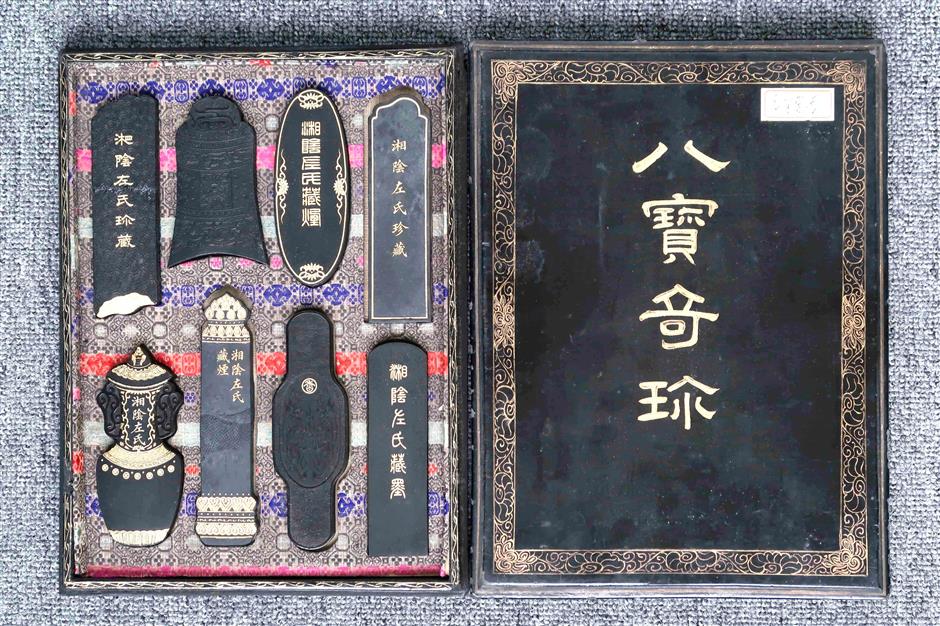 A set of eight inksticks belonging to Zuo Zongtang, a Chinese statesman and military leader

Liquid Chinese calligraphy ink that we use today didn’t appear until the Qing Dynasty (1644-1911).

Before that, ancient literati used the solid inkstick, which is considered one of the “Four Treasures of Study” in Chinese literary culture, along with the brush, paper and the inkstone.

To make ink, an inkstick is rubbed with water on an inkstone until the right consistency is achieved. The density of the ink influences the final result of the work.

“I really enjoy the feeling of grinding an inkstick on an inkstone to make ink, which is totally different from using bottled ink,” said Qian Yangchun, 49, a collector of antique inksticks and a member of Shanghai Collection Association.

The earliest human-made inksticks that have been found so far trace back to the Qin Dynasty (221-206 BC). A cylindrical inkstick 1.2 centimeters long and 2.1 centimeters thick was unearthed in 1975 from a tomb belonging to a Qin administrator in Hubei Province.

Inksticks were mainly made of soot and animal glue created by prolonged boiling of connective tissue.

Soot inksticks produced by hypoxic burning of oils are divided into pine soot ink and oil soot ink. The former creates a quaint and natural look, while the latter gives a lustrous, warm effect.

Pine soot ink first appeared in the Han Dynasty (206 BC-AD 220), but overharvesting of pine trees resulted in a lack of sources for the ink. Then oil soot ink appeared in the Song Dynasty (AD 960- 1279). It is mainly made by burning tung oil along with other ingredients like lard and canola oil.

Qian said he has collected around 1,500 inksticks. Learning calligraphy as a child was the preface to his interest in inksticks.

“I moved from Jiangsu Province to Shanghai in order to provide my son with a better education,” he explained.

In 1999, he settled in Songjiang, a district with a deep cultural history. Among its many luminaries were Western Jin calligrapher Lu Ji, who wrote “Pingfu Tie,” and Dong Qichang, a renowned calligrapher and painter of the late Ming Dynasty (1368-1644).

In terms of usage, inksticks can be subcategorized into those exclusive to emperors, those used in tributes, those self-made or ordered by literati and those used as medicine.

During the reign of Emperor Xuanzong of the Tang Dynasty (AD 618-907), an official institute specializing in making royal inksticks was established in Yizhou in Hebei Province. An array of famous inkstick craftsmen, including father and son Xi Chao and Xi Tinggui, worked there.

In the latter Tang years, the outbreak of An-Shi Rebellion forced the Xi family to flee south. They settled in Shexian County in Anhui Province, where they kept making inksticks. Li Yu, third ruler of the Southern Tang state (AD 937-975), was so taken with the inksticks that he granted father and son the use of his own surname.

Anhui has remained a center for the highest- quality inksticks.

According to Qian, his favorite collection is a set of eight inksticks made by Hu Kaiwen, a famous craftsman of the Qing Dynasty. They were ordered by Zuo Zongtang (1812-85), a Chinese statesman and military leader.

The inksticks are in different shapes, such as bells and vases. The characters on the inksticks signifying Xiangyin County in Hunan Province, where Zuo was born, are engraved and inlaid with gold.

"Zuo was a courageous and patriotic military leader, quashing rebellions and defending our territory," Qian told me. "However, when he returned home to study, he became a literati, rubbing inksticks and writing calligraphy."

The storage box containing the set is also an artwork. Zuo's inksticks are placed in a black lacquered box dusted with gold. 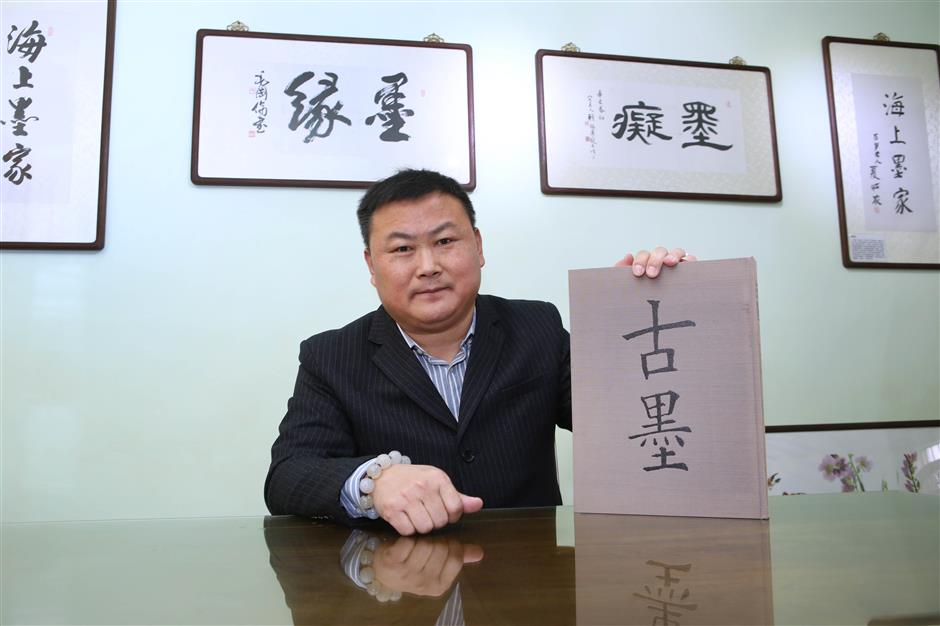 Qian Yangchun, a collector of antique inksticks in Songjiang, Shanghai 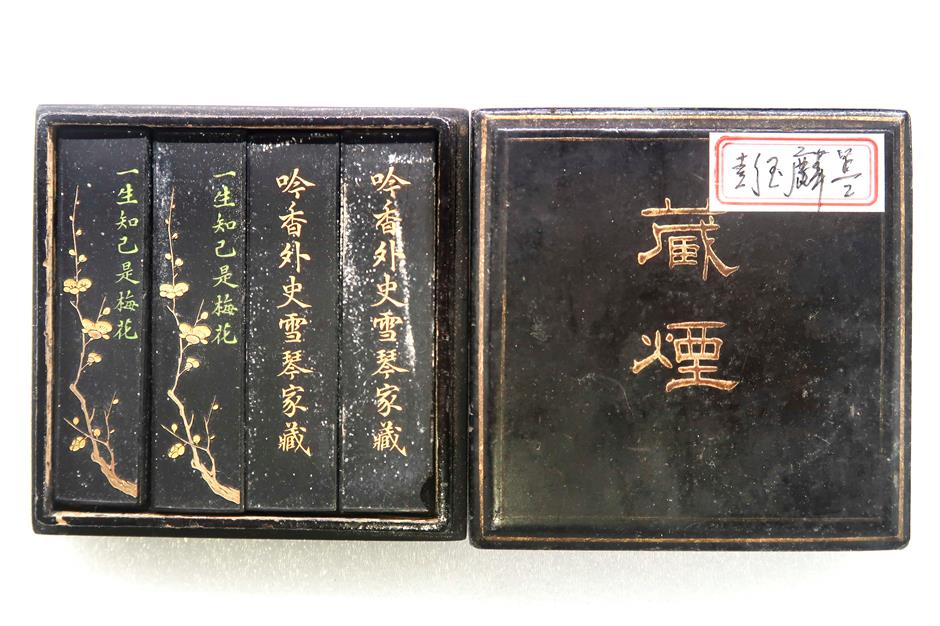 Indeed, inksticks tell stories of their original owners. Qian showed me a set of inksticks belonging to Peng Yulin, a strategist of the late Qing Dynasty. They recount a touching love story.

The inksticks are carved with plum blossoms and a sentence that translates as "my lifelong bosom friend is a plum blossom." The plum blossom symbolized a woman nicknamed Meigu, or "plum girl."

Peng grew up in his grandmother's house. She adopted Meigu, whose age was similar to Peng's. As childhood sweethearts, Peng and Meigu pledged to marry someday, despite opposition from family hierarchies. The couple eventually was broken up.

Betrothed to another man, Meigu died in childbirth. The sorrowful Peng vowed to draw more than 100,000 plum blossoms for the rest of his life in memory of his beloved. He fulfilled the promise. Peng's inksticks could have been used to paint the plum blossoms.

Apart from black sticks, there are many colorful ones in Qian's private museum. Red, yellow, green, blue, cyan and white — all natural pigments.

"The smell of the ink made by grinding the inksticks is fragrant," said Qian.

Apart from soot and glue, some inksticks are made with traditional Chinese medicines like musk and borneol, which has a camphor-like scent.

"Previously, the mixture was mashed manually over tens of thousands of times before being molded," said Qian. "That level of laborious craftsmanship no longer exists."

Apart from use in writing calligraphy and painting, inksticks can be used as medicine, which was especially popular in the Ming and Qing dynasties. With different medicinal materials, the inksticks were said to treat various ailments, such as nosebleed, stomach ulcers, dysentery and even strokes.

"In the dead of night, when all is still, I sip a cup of tea and enjoy the inksticks alone," said Qian. "I feel as if I am conversing with ancient people. That is my coziest time of the day." 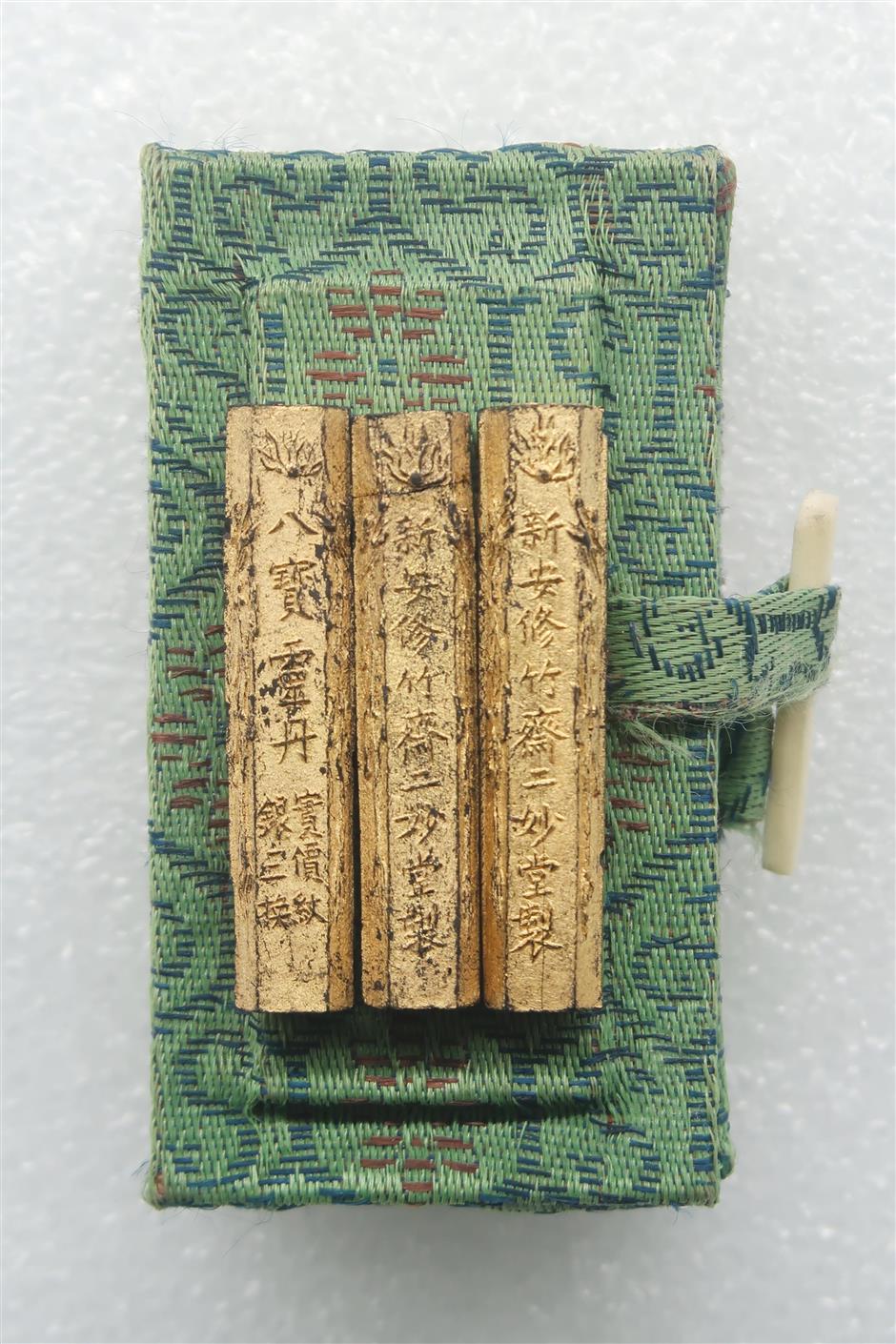 Inksticks made in the Qing Dynasty were used as medicine.