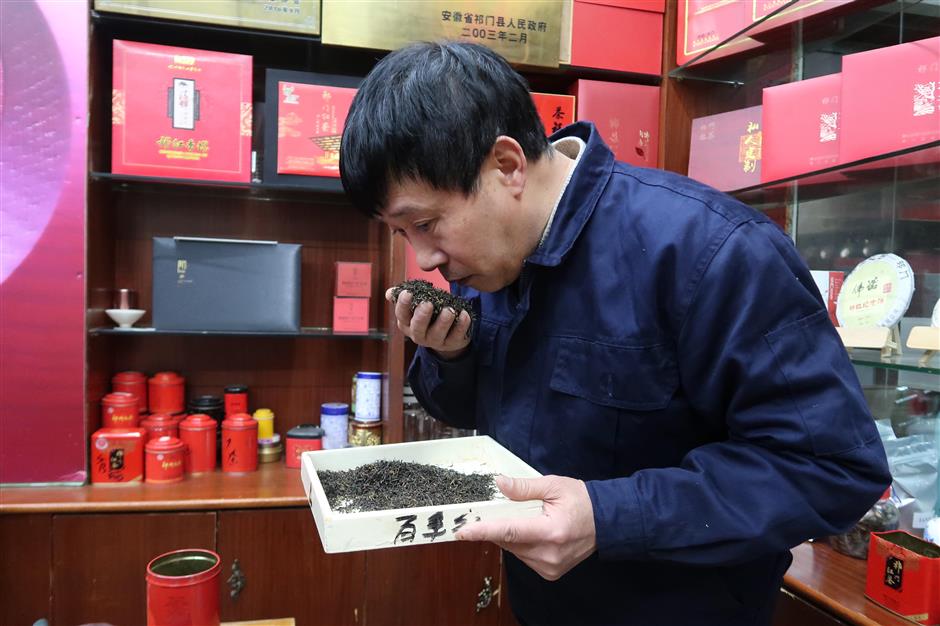 Liu Tongyi’s life is tightly bonded with the tea. Having selected, sifted, processed and tasted Qimen black tea for almost 40 years, the 60-year-old Anhui Province-native is an acknowledged tea master and ultimate authority in the industry.

He spoons a small amount of Qimen black tea leaves into a glass and then adds boiling water as the leaves bob up and down.

“Sniff first and smell the fragrance,” Liu says. “Then taste the tea and you sense a touch of sweetness.”

If it were not for its famous black tea, Qimen — a small, quiet county on the southeastern tip of Anhui Province — would probably have forever remained obscure, eclipsed by the iconic Huangshan, or Yellow Mountain, nearby.

But fortunately for tea drinkers, a young civil servant named Hu Yuanlong in the late 1800s traveled to Fujian Province to learn the art of black tea. He returned to Anhui, where only green tea was grown and opened three factories in Qimen to produce black tea.

The result was a huge success. The tea, with a fruity fragrance and hints of pine, orchid, dried plum, honey, wine and sweet, smoky rose became a hit. Its flavor is subtle, sometimes a bit toasty and nutty. The complex mellowness is thanks to the area’s mild, rainy climate and its sandy, well-drained soil.

Black tea put Qimen on the map. It became the daily beverage of English royalty and even today remains a key ingredient in English breakfast tea. It is considered one of China’s greatest teas and is often presented as a state gift to visiting dignitaries.

Qimen produces one of the world’s three best black teas with strong fragrance. The other two are India’s Darjeeling and Sri Lanka’s Ceylon, but Qimen is more fruity.

Today, the old traditions are still carried on by Liu, an heir to Qimen black tea-making skills, which have been listed as intangible cultural heritage in China. It’s an art to select, sort, sift, process and blend the tea, a strictly observed process that involves 16 steps and the senses of sight, smell, touch and taste.

Liu knows every step of the process by heart.

After being picked, the fresh tea leaves are processed first in high temperature, carefully controlled to break down chlorophyll. If the temperature is too low, some chlorophyll remains; too high and the leaves will be charred.

“The proper temperature ranges between 180-240 degrees Celsius, depending on the time of day and the weather on the days leaves are picked,” Liu explains. “It all relies on experience.”

After being skillfully rolled, dried and baked, the tree leaves are fermented, re-baked, sifted, blended and packaged to become certified Qimen tea.

It usually takes at least three years to learn the set of manual skills to process the tea and probably another five years to completely master the skills.

“I cannot live without tea,” Liu says. “It’s deeply engrained in my life.”

At the age of 20, Liu became a clerk at a local supply and sales cooperative that purchased tea leaves from farmers. He visited the vast tea gardens in Qimen and learned how to differentiate different tea bushes, pick the leaves and process the tea, under the guidance of his first teacher Wang Zugui.

Later, he studied under more masters, honing his skills in brewing and tasting tea. His mentors included senior technicians Song Jiazu and Min Xuanwen, who made the black tea for Margaret Thatcher during her visit to China in 1982.

Liu still clearly remembers the days when he had to practice sifting, which required him to stand for hours holding a giant, round bamboo sifter heavily loaded with rice.

“Because the tree leaves were so precious at the time, I had to practice with a substitute,” he recalls.

Today, at Liu’s teahouse in Shanghai, he still keeps the sifter and demonstrates the skill of using it as daily physical exercise. The tea leaves quickly whorl in the sifter under Liu’s controlled movements. They gather and scatter, which separates the good and bad leaves in minutes, eliminating those that don’t make the grade.

A good cup of Qimen tea is judged by many criteria and rated in up to 10 grades, according to size and shape of tea leaf, integrity of flavor, color, presence of buds, consistency, aroma, taste, color of the tea water, and the color and appearance of the brewed leaves.

The best tea leaves have only one bud, one leaf and a second leaf about to open. They are the freshest and most tender, plucked from the tip of a branch. The highest grade of tea can sell for more than 10,000 yuan (US$1,490) per 50 grams. The best of the best is “two buds with one leaf,” but that is extremely rare.

In general, the more golden the sprouts, the better the tea. However, if there are too few leaves, the tea loses its fruity fragrance, mellow taste and dark-colored tea water.

Eliminating chlorophyll is a critical step in tea processing. 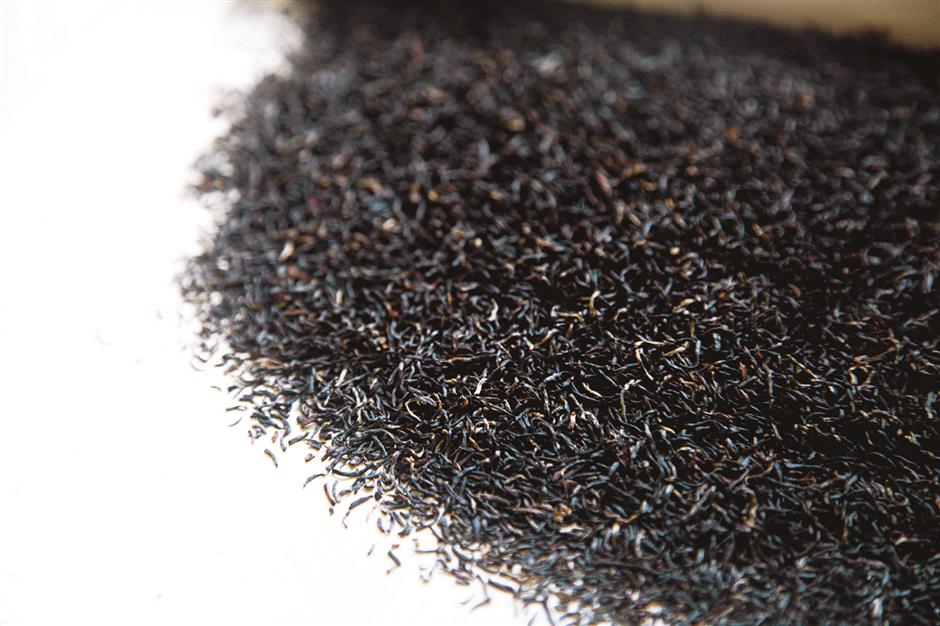 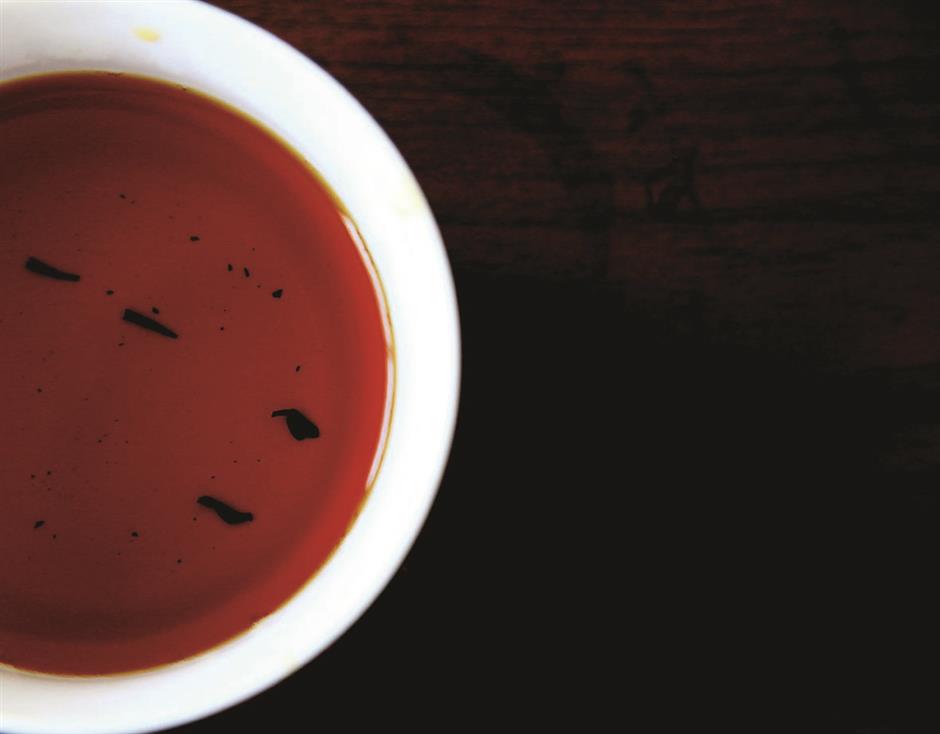 A cup of good black tea