The Majestic Theatre was the last theater built during Shanghai’s “lonely island” period when the international settlement was surrounded by Japanese-occupied territory from 1937 to the end of 1941. When it threw open its doors on October 15, 1941, it was regarded as a masterpiece of “a new epoch in Far Eastern architecture.” 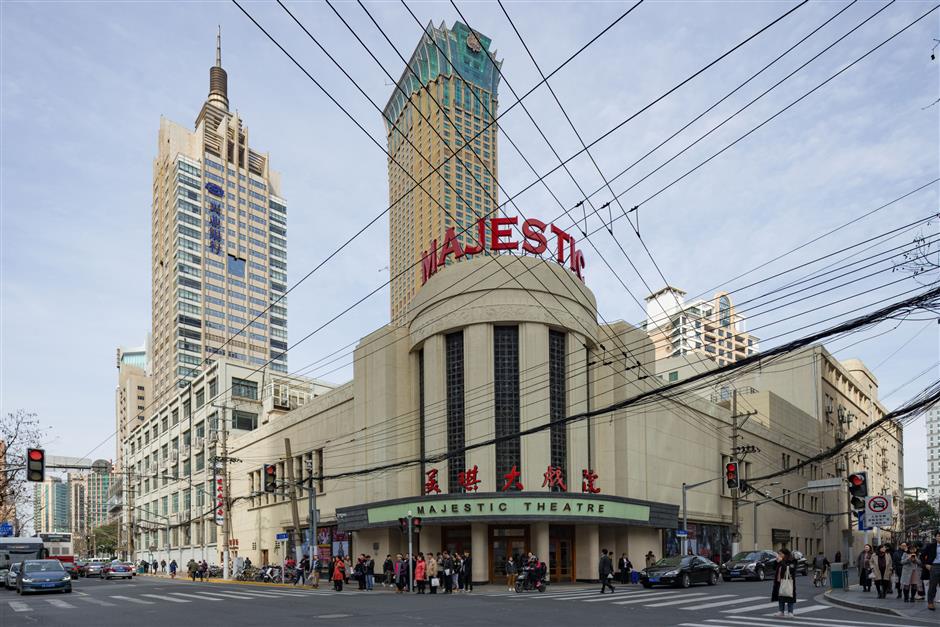 The Majestic Theatre is a signature work of Chinese architect Fan Wenzhao (Robert Fan) in a late Art Deco style.

At the corner of Jiangning and Fengxian roads, the 1,597-seat theater was named after nearby Majestic Road, today’s Nanhui Road. Designed to stage dance performances, opera and concerts, the Majestic was also used as a cinema.

Next-door to the theater stood the Majestic Hotel, where Chiang Kai-shek and Song Mei-ling held their grand wedding ceremony in 1927. The hotel was destroyed in a fire and the land sold for redevelopment.

In search of a Chinese name for the venue, the theater’s managers organized a public competition in the months before the official opening. Over 2,000 letters flooded in, with seven of them bearing the same suggestion 美琪（meiqi), which not only meant “perfect as beautiful jade,” but has a pronunciation very similar to “majestic.” And so the theater duly became “美琪” to the Chinese audience.

The Majestic was the third cinema owned by Shanghai Amusement Co. Ltd., which built the Beijing and Nanking theaters in the 1930s.

Perched along Nanjing Road, the Nanking Theatre, YMCA building and Majestic stood witness to the transition of architectural styles by Fan and the first-generation of modern Chinese architects. 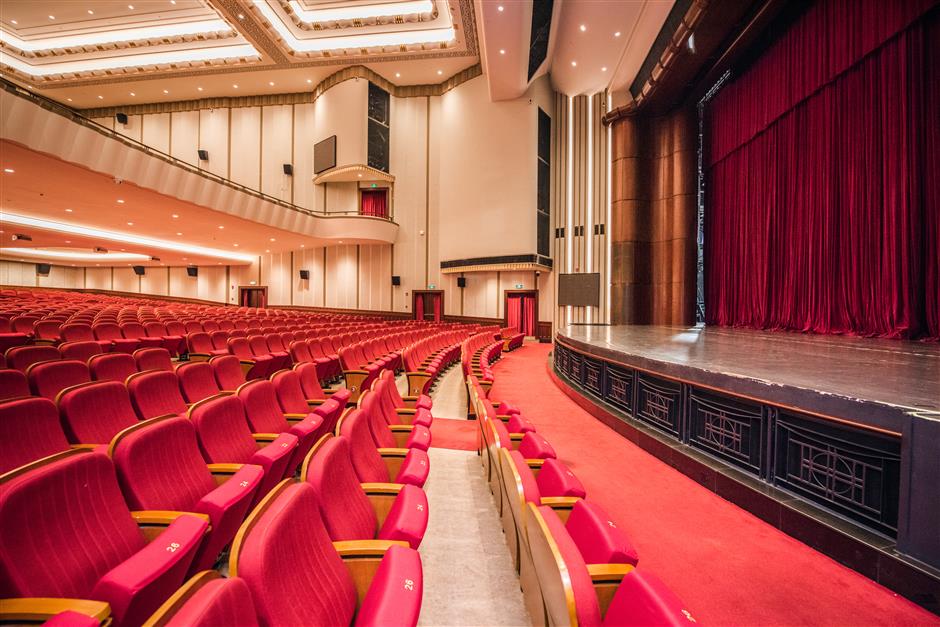 With a capacity of 1,597, the Majestic Theatre hosts up to 200 performances, including dance, plays and concerts, every year.

Built in 1930, Nanking Theatre, today’s Shanghai Concert Hall, is a rare surviving example of a Western classical-style building designed by Chinese architects. Fan and fellow University of Pennsylvania graduate Zhao Shen (S. Chao) designed the building in a modified renaissance style with arcades, pillars, a huge dome inside the theater and parapets with delicate carvings.

Later Zhao, Fan and others designed some “Chinese-renaissance” buildings which incorporated both Chinese and Western elements, such as the YMCA building with its upturned eaves and large plate-glass windows — today’s Jinjiang Metropolo Hotel Classiq in People’s Square.

“They gave up that style and embraced more modern styles — a simplicity of form, space, materials, detail and color. Zhao’s firm began to abandon big Chinese roofs while Fan was even more radical. He called for correction of the ‘big roof mistakes,’ especially after European architect Carl Lindbom and Chinese architect Wu Zi’ang joined his firm in 1933,” says Qian Feng, another Tongji University professor.

“After his 1935 tour of Europe and representing China at the 14th International Housing and Town Planning Congress in London and the 13th International Architectural Congress in Rome, Fan fully embraced that ‘international style’ that valued ‘form follows function.’ His 1941 work, the Majestic Theatre, was a very modern piece,” she adds.

In addition to the Majestic, Fan’s other works after 1935, such as the Yafa Apartments on Wuyuan Road and Georgia Apartments on Hengshan Road, were all in a modern style.

Facing streets on two sides, the Majestic with a rounded vestibule in the center and two side halls on the street-side flanks reduced the conflict between architecture and the streets while eliminating as much noise as possible. 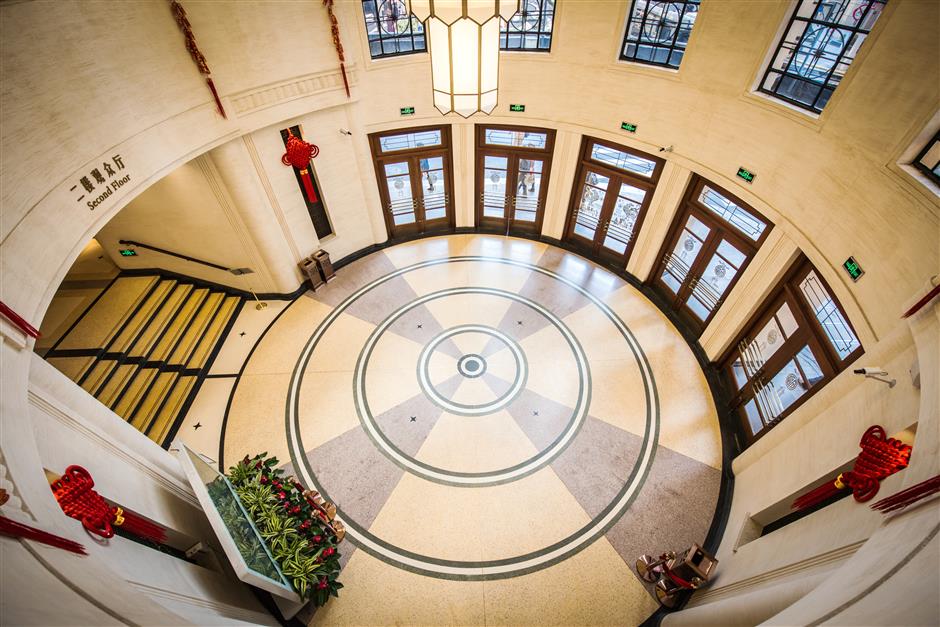 Between the outer door and the interior of the theater is the round vestibule, which eliminates as much noise as possible from the street.

The facade is simple, even a bit raw. The whole building is painted yellowish cream and embellished with some sculptured strips in the same color, creating an elegant effect.

The entrance features five long windows that form the focus of the facade. In the entrance hall hang splendid crystal chandeliers. The inner space is smartly arranged to look continuous, free-flowing and dynamic. The architect has used cream-hued terrazzo and wave-shaped architraves to decorate the floors and walls.

“The staircase is smartly designed with curves, which resembles the staircase of the Grand Theatre in the People’s Square, another modern cinema, designed by Slovakian-Hungarian architect Laszlo Hudec. The two staircases represent late Art Deco style when the hard lines zigzags of the early style had evolved to curves,” says professor Qian Zonghao. 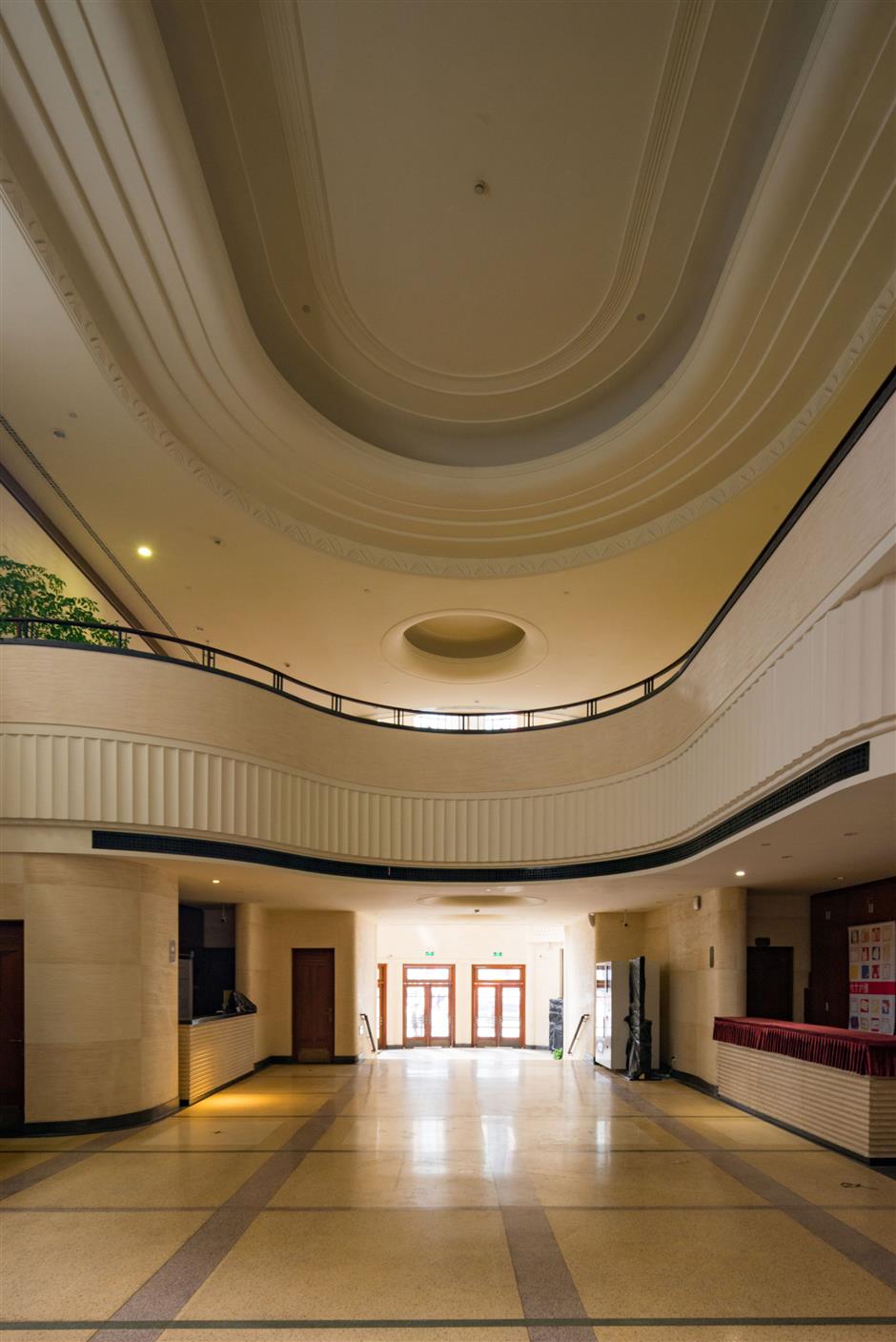 The curved staircase resembles that of the Hudec-designed Grand Theatre in the People’s Square.

In his 2015 book “Robert Fan,” Huang Yuanzhao notes that Fan was awarded the Majestic project because he had had a good relationship with the owner of the Nanking Theatre for more than 10 years.

“The layout is rational with clearly separated functional spaces—the waiting and entrance halls, ticket office, staircase and corridors. These spaces are properly arranged in a natural flowing way. Sculptures embellished the solemn ambience.

“On the facade, Fan’s use of long straight windows on the round tower not only provides interior lighting, but also forms vertical language. Even the curved canopy below the huge tower creates a speedy aesthetic together with the tower. The theater was called ‘Asia’s first’ upon its opening,” Huang says in his book. 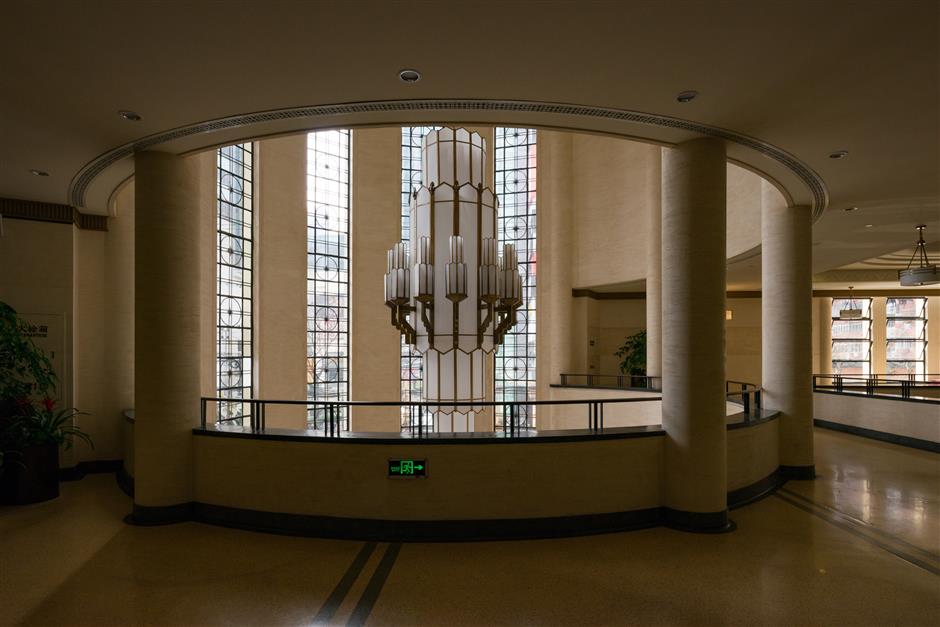 The long windows provide natural lighting during the day.

The Majestic Theatre became one of the first cinemas to show Western movies. A galaxy of stars, including Peking Opera master Mei Lanfang and ballet dancer Galina Sergeevna Ulanova, have performed there. In 1954, the first Shanghai People’s Congress was held here.

In 1989 it was listed in the city’s first group of excellent historical buildings and became a municipal cultural relic for preservation.

Since then, the theater has undergone several renovations, most recently before the 2010 Shanghai Expo to revive its original look and improve facilities — from air-conditioning to a new sound system imported from the United States.

“The theater is not big but it is an important cultural venue in a great location. We host up to 200 performances, including dance, plays and concerts, every year,” said manager Ouyang Yejing. “We are updating the main hall in time for the new season later this year.”

Tips: The concert hall is only open to its audiences. I’d suggest visit the building a bit earlier ahead of a performance to admire it. 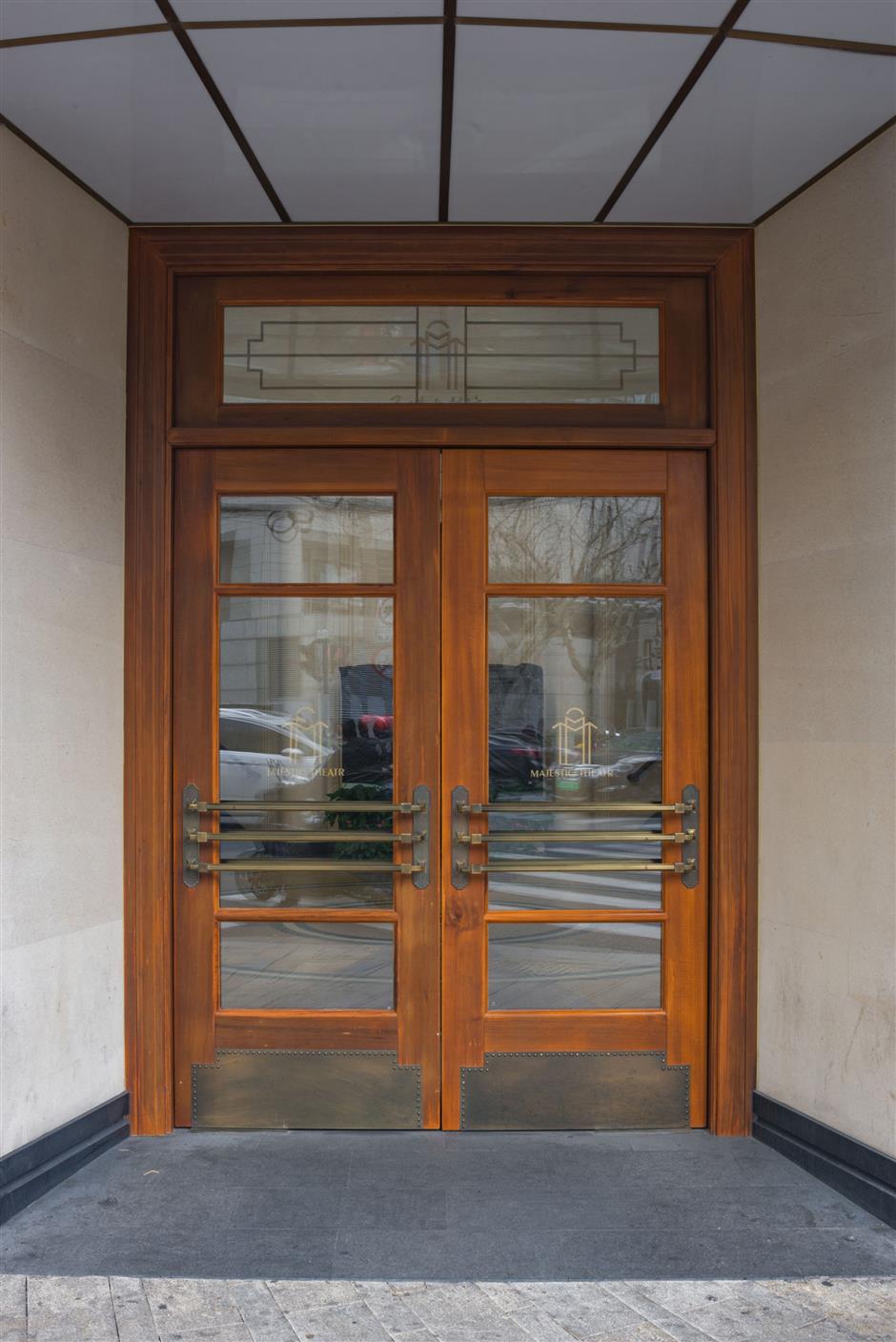 The Society of Chinese Architects

The Society of Chinese Architects, which was organized last year by the local Chinese practicing architects, held its first annual meeting in the form of a dinner at the China United Apartment dining room a week ago. The following officers were elected: President Mr. Robert Fan; Vice-President, Mr Y.C. Lu; Treasurer and Secretary, Mr Poy G. Lee; Mr T. Chuang was elected to serve on the Board of Directors.

The objects of the society are to unite in fellowship the architects of China and to combine their efforts so as to uphold the dignity and standing, and to promote the efficiency of the profession, and to render support to the public authorities in their civic developments and improvements.

In view of the recent steps taken by the local Chinese Government in relation to the registration of practicing architects, the Society has offered its service to the Public Works Offices of the Government on matters concerning the profession.

One of the most ambitious plans of this group of enthusiastic men is to obtain a club house for the society. It is hoped that general public interest will be given to the advancement of architecture in China to such an extent that the club will be donated to the society as a gift by some enthusiastic patrons.

In view of the fact that there are a great number of students and draftsmen who desire to learn architecture but cannot obtain proper training on these lines, the society proposes to incorporate into their future clubhouse an atelier to give these young men the opportunity of educating themselves on the lines of architectural design.