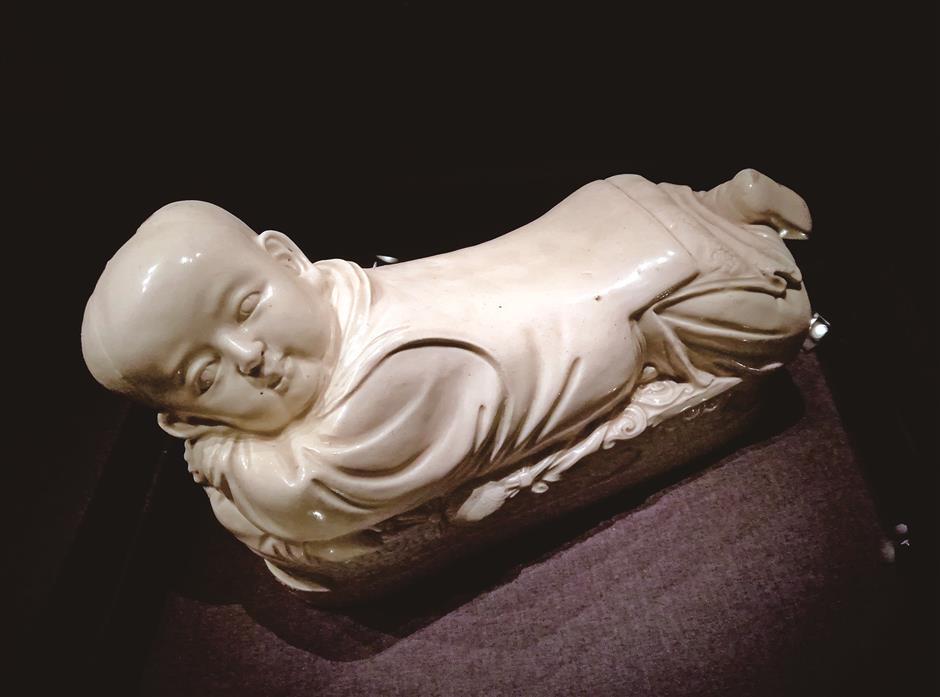 The baby-shaped pillow in the Palace Museum in Beijing is one of national treasures.

Providing support for head and neck during our sleep, pillow plays an important role in our life.

Unlike today’s soft pillows filled with synthetic fiber, down and feather, ancient Chinese pillows were extremely firm, made of wood, stone, copper or porcelain.

Many people today doubt whether it is comfortable to sleep on such a hard pillow, but ancient people cherished these porcelain treasures.

Porcelain-glazed pillows were a perfect tool for keeping cool in ancient times.

And with the help of ceramic pillows ancient people were able to have a sound sleep during a hot summer.

Both Li Qingzhao and Wang Anshi, two renowned poets of the Song Dynastey, referred to cool porcelain and stone pillows in their poems.

Wang said that bamboo mats and pillows were as precious as gold for the literati in summer.

Hard pillows were also said to be good for your health as it could improve people’s eyesight.

The saying is recorded in the ancient text “Tao Shuo” written by Zhu Yan in the Qing Dynasty (1644-1911). It is China’s first book on the history of pottery.

Porcelain pillows also helped the ancient Chinese people to keep their hair from getting messy.

Cherishing hair was seen as a symbol of self-respect — both women and men had long hair at that time, and it was very time-consuming to create an updo.

Compared with today’s pillows, the contact area between ancient hard pillow and head was much smaller so it was easier to maintain hair in place.

There is a Chinese idiom called yuanmu jingzhen featuring a story of Sima Guang (1019-1086), who was a Chinese historian, writer and politician in the Song Dynasty.

In order to sleep less and work more, the high-ranking scholar-official slept on an uncomfortable log-pillow.

His head rolled down the log-pillow once he turned over in bed. Sima called the pillow jingzhen, or a pillow alert.

Exhibited in the Palace Museum in Beijing, the Ding ware baby-shaped pillow in ivory-white glaze is one of China’s national treasures.

The life-like porcelain portrays a boy lying prostrate on a couch, which is patterned with abstract flowers and clouds implying auspiciousness.

Allowing air to escape during the firing process, two holes were cut into the bottom.

Wearing a vest and a gown with wrinkles, the lively and naughty boy crosses his arms and legs. His back is used as the surface of the pillow. 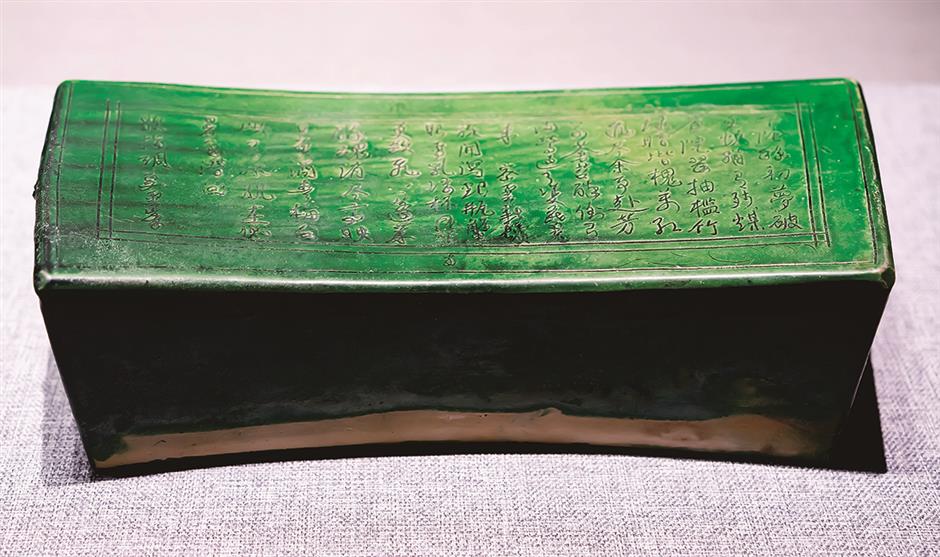 Unlike today’s soft pillows, the ancient Chinese pillows are extremely firm, made of wood, stone, copper and porcelain.

The porcelain pillow was fired in a Ding kiln, which was known as one of five great kilns during the Song Dynasty, along with Ru, Jun, Guan and Ge kilns. Appearing in the Tang and Yuan (1271-1368) dynasties, Ding ware thrived in the Northern Song Dynasty (960-1127).

The kilns were mainly found in Jianci village in Quyang County of Hebei Province.

The design of the pillow is said to be associated with a man named Zhao Gang and his wife Meixia in the Northern Song Dynasty. Both of them were Ding ware crafts personnels. Zhao was in charge of firing while Meixia did the painting.

Having been married over 10 years, the woman couldn’t get pregnant. Following the ancient tradition called shuan wawa, literally tying dolls, which was popular in ancient Northern China, Meixia went to a local Temple of the Queen of Heaven and sought divine assistance.

After worshipping Songzi Niangniang, or “the maiden who brings children,” she used a red rope to tie a clay doll and later enshrined it at home.

After a year Meixia still wasn’t pregnant. Disappointed and desperate, she sobbed in front of the doll. Her tears broke Zhao’s heart. Angrily, he smashed the doll, which made Meixia even more sorrowful as she thought there was no hope of getting pregnant.

Exhausted, Meixia fell asleep and dreamed of a baby running happily on grass, calling “mom” to her.

Meixia sculpted the baby figure in clay and designed it into a porcelain pillow, which was fired by Zhao.

After sleeping on the elaborate pillow for half a year, Meixia, miraculously, got pregnant. She believed it was the pillow that created the miracle.

Meixia later treated the baby-shaped pillow as a clay doll and ceremoniously set out chopsticks and bowls at meal times for it.

During festivals she also dressed the baby-shaped pillow in clothes and sent offerings to it. And Meixia’s child later called the pillow her elder brother complying with an ancient old tradition.