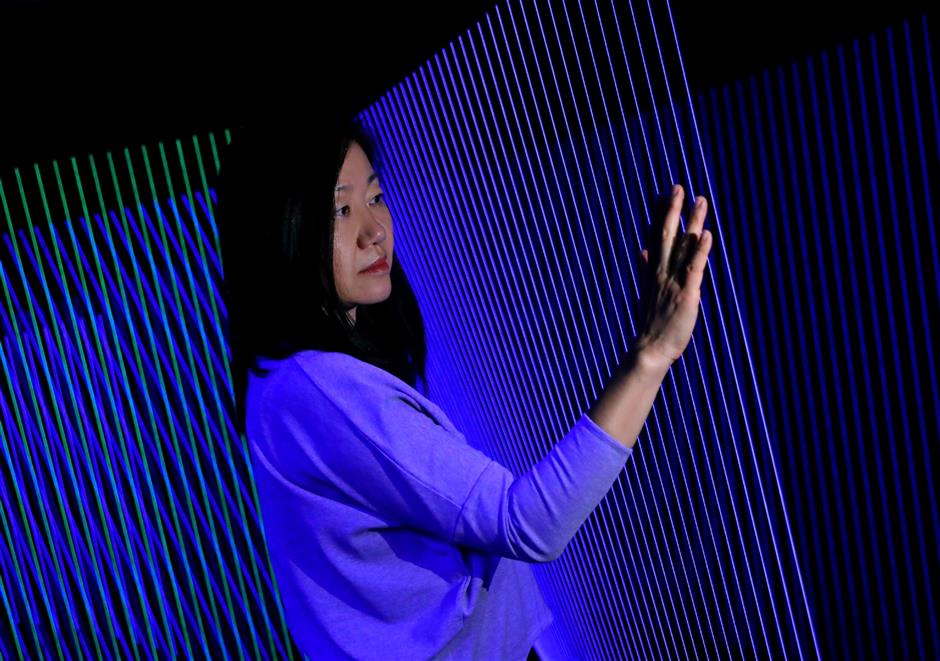 Following its debut in Hong Kong, WALK ARTISTRY, a project sponsored by Camper and Kube (Hong Kong) Design Communications, has come to Shanghai.

WALK ARTISTRY is a collaboration between South Korean artist Jeongmoon Choi and Chinese artist Lee Chi. It is the first time a Jeongmoon Choi installation has been seen in Shanghai.

Choi is well-known for creating an illusory space from light and thread. She uses ultraviolet light to create spaces that blur the gap between visual sensations and reality. By combining light, threads and colors, her installations beckon visitors into a maze-like light space wrapped in darkness, a world of simple lines.

Born in Seoul, South Korea, Choi studied at Sungshin University and moved to Germany in 1995, where she furthered her study at Kunsthochschule Kassel, a college of fine arts.

Today, dividing her time between Berlin and Seoul, she is noted for lighting up darkness with complex, geometric meshes of UV-reflective threads that create a sense of confusion. As the threads reflect the light, the space seems to vibrate.

Choi builds tension between the fragility of the filaments and the massiveness of the surrounding space that is obscured or hidden by the darkness.

Her installations seek to redefine the space between points. Visitors traverse from point to point with a new kind of visual and sensory experience, while they themselves become part of the work.

Her work inspires viewers to contemplate endless possibilities, an experiences that is not easily forgotten.

Choi’s work has been exhibited around the world.

Q: What inspired you to use threads in your art? Is there any hidden metaphor?

A: Threads for me are a drawing tool instead of a brush or pencil.

As a counterpart to the color palette, threads are used as drawing materials. So threads are drawn to both classical surfaces, such as canvas, and also freely in space.

The interesting thing about the use of threads as a material is that they are very easy to destroy, but on the other hand, can form very strong and powerfully structured patterns.

The works thus produce a tension that results from the pairs of opposites “strength” and “vulnerability,” “security” and “risk.”

Q: What was the most challenging part of this work at the Shanghai showroom?

A: The most challenging part was the space. Because the space is small and ceiling is low, I had to expand it if possible. That’s why I used the walls a lot. The four walls were transformed so that the entire space would be changed architecturally.

In addition, a small labyrinthine passage was drawn. I used paths as long as possible for the visitors to make the space more creative than the reality.

Q: Are these the kind of ordinary threads we see in everyday life?

A: The threads are actually very ordinary. They can be used for sewing. However, I need exact diameters and colors for my installations, so I have them made specially in a factory in Korea.

Q: Your work involves a lot of technical support in lighting and space design. Do you have a team to help you?

A: First, I work alone with a concept. Sometimes I build a small model of an installation or use a 3D program to draft a concept in my studio.

The threads are very sensitive and need an exact tension. For that I need my assistants, who are trained for this.

Q: What kind of message or feeling do you want to inspire in the viewers of this work?

A: The work is to operate “ in between” ideas — between “line” and “space,” “2D” and “3D,” the “home-spun” and “hi-tech,” between “visual experience” and “physical experience” for the viewers who have to negotiate both “image” and “architecture.”

The visitors who enter the room will be able to find the hidden form and this is an interaction with lines and surfaces, movements and discovery.

And my installation has a lot to do with the physical body.

During the setting up, I keep moving, making repetitive movements, similar to a choreography. And the echo and results of these movements will later soothe me and the visitors into a certain kind of concentration and meditation.

Q: You studied in Berlin and now reside there. How do you think the European experience has influenced your art?

A: I could deal with my creative side in Germany, because I had received all my technical training at university in Korea.

True, the lifestyles in Seoul and Berlin are a bit different.

Life in Germany is more about concentrating on myself and in Korea what is more important is relationships with other people. The different lifestyles have given me a contrast and a critical thought about life and art.

Although I have been away from home for such a long time, I do not want to lose my roots and culture. I often try to fuse the Asian thought and philosophy as a background theme into my work.

Q: You studied painting at the beginning, then switched to art direction. Why?

A: When I completed classical training as a painter, I found that the canvas was too small for any creative freedom. As a result, my paintings became bigger and bigger, sometimes I painted even 6-meter-long paintings.

At that time, my wish was that I could walk in my artwork. That’s why I was increasingly interested in working in space as 3D form.

Later I discovered the threads as my drawing tool, since then I have started to work as a 3D drawing artist in space.

Q: As a successful female artist, what are the advantages and disadvantages?

A: For me, there is only one word for an artist, ARTIST.

As an artist, I work independently from a system in a close society. I can be myself as a boss, but also as an employee.

Also as an artist, I have more freedom and creativity than the other people, but I have to carry many responsibilities at the same time.

Q: Who’s your favorite artist? Why?

A: My favorite artist is Fred Sandback, known for his yarn sculptures, drawings and prints. He has given me inspiration and I admire his works on how he has made space and sculpture with reduced lines.

Q: Can you use three words to describe yourself and the works that you create?

A: Orderly, but freely and patiently. 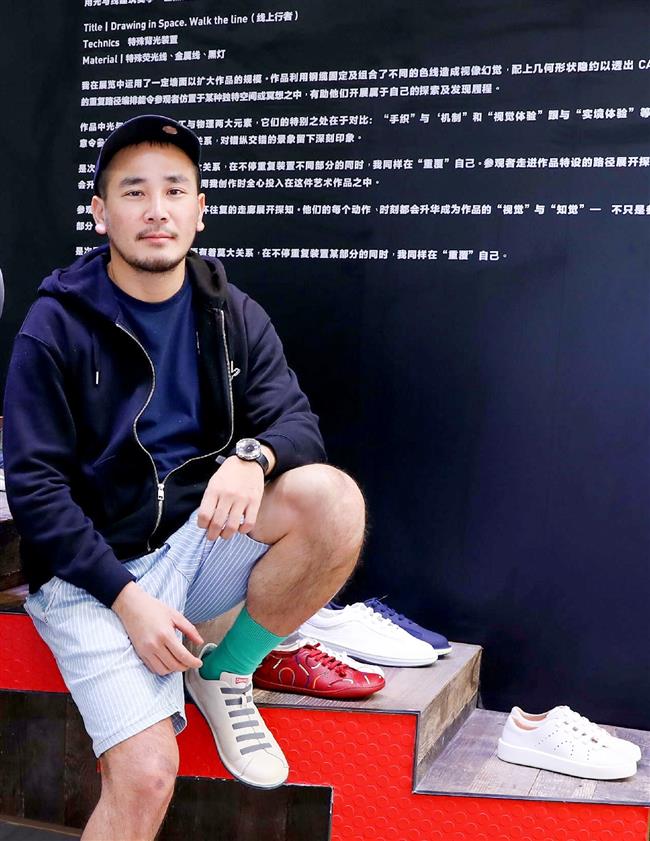