French glass master shines a light on his soul

The world’s largest stained glass windows and dome can be found at Yamoussoukro Basilica in the Cote d’lvoire. As you can imagine, you would have to travel quite a distance to see Eric Bonte’s creation. But the solo exhibition of the French glass master at Liuli China Museum will more than make up for it.

“Born From love, Roused By Freedom: The Glass Soul of Eric Bonte” features 32 new pieces created by the artist in his first Asian solo exhibition.

Many will remember his daunting work at the basilica where he used over 1 million pieces of glass to cover the 8,400-square-meter dome and stained glass windows. The project took nearly 18 months to complete in 1987.

Since then Bonte has completed many domes and architectural works around the world, which later won him the nickname of “the person who is the closest to light.”

Born in Paris in 1956, Bonte graduated from the National School of Applied Arts and Crafts in Paris. The glass artworks being showcased in Shanghai, however, reflect a different facet of Bonte’s pursuit in glass.

Chang Yi, curator of the exhibition, said, “This exhibition sees Eric Bonte leave behind the colorful domed ceilings of his past and move toward an abstract romanticism by shaking free from expectations and constraints.

“Perhaps he hoped to cultivate his internal voice, to experience the silence and purity following a maelstrom. Perhaps he saw this as an opportunity to make his true self heard.”

Through lines, planes, creases, twists and turns, Bonte captures free light through glass. Rather than the orderly geometric shapes of his past, his new work veers toward an abstract and post-modern style. There is a yearning for freedom and a passion for innovation behind these works.

“Butterfly Pincer” is a standout piece. At first glance, the sculpture resembles a butterfly. Upon closer look, it is actually a shell and pincer.

Also take note of the artist’s use of red. This sculpture showcases his admiration for nature, especially the ocean.

In many cultures, gold is considered a holy and eternal element. In ancient alchemy, gold is believed to be the greatest of all metals.

In Bonte’s work, he bravely removes the layer of mysticism surrounding the element. He believes that both gold and glass, like light, have the power to rouse an unexpected response from the human soul.

“The use of gold serves as a metaphor for discovery and progress,” said the 63-year-old artist.

In his works such as “Liberated Women” and “Tied Up,” Bonte also adopts the color of black in his glassworks.

“My sculpture is an opening to another, a challenge to the darkness of the world,” he said.

Set in moody black, elevated gold and tranquil white, “Tied Up” betrays no joy, it features the outlines of a female who cups her ear as if to block out the world’s disdain and elevated gold binds her body.

Gaia, the ancestral mother of all life in Greek mythology, is the inspiration for another of Bonte’s work “Whirlwind Mother.”

Through this piece, the artist encourages viewers to rediscover the most fundamental life force — goodness and hope, which gives new possibility to all.

“But I don’t want to impose my ego on the viewers. I want to encourage them for an interpretation of my work,” Bonte said, “What is freedom? It is listening to the voice inside you, to be even more forthright, it is doing exactly what you want.” 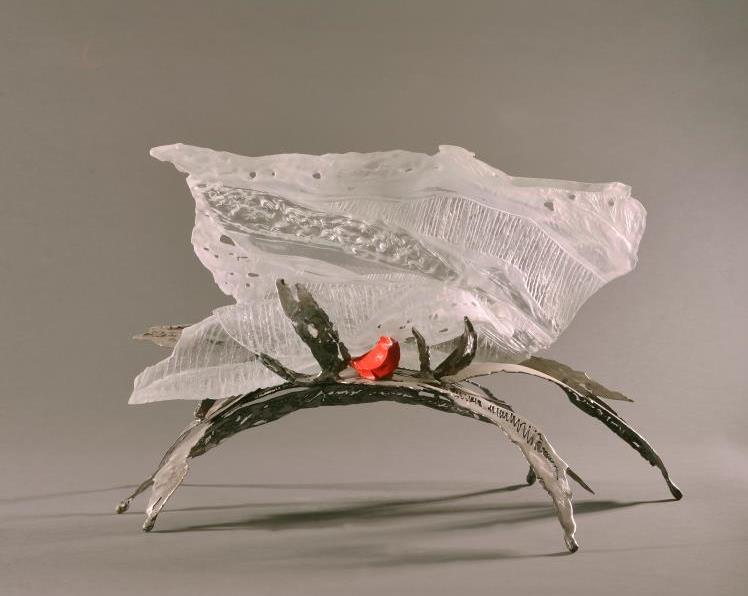 “Butterfly Pincer” is a standout piece by Eric Bonte.