Jushan Bridge outside the West Gate of Jiading Old Town

Generally, most arch bridges in Jiading and beam bridges in Jiading’s urban areas have railings. Xiaonan Bridge on Chengzhong Road is named after its decorative railings. Xiaonan in Shanghai dialect means children. A group of innocent children were carved on the railings of the bridge, with different and vivid expressions, which caused people who crossed the bridge to stop and watch.

Most bridge railing posts in Jiading are square with a lotus decoration, such as the Taiping Yong’an Bridge to the west of Fahua Pagoda and the Wangxian Bridge in Waigang Town. 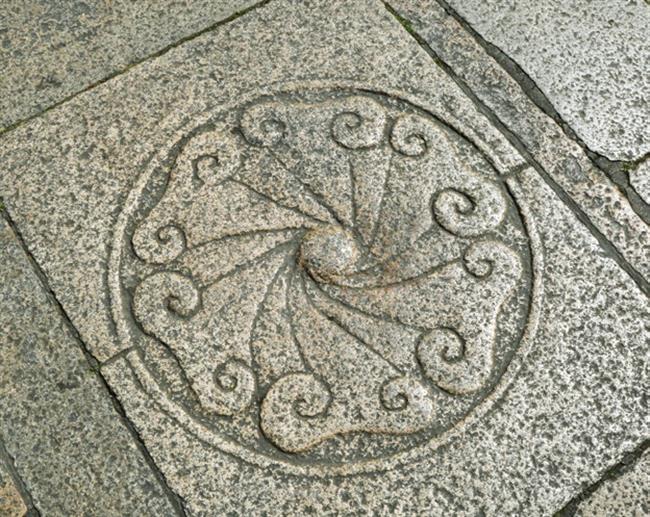 The core stone on Defu Bridge

Core stone is the last stone slab put on the deck of a stone arch bridge. It is a relatively important component and with the most exquisite carving. Because when the stone slab is covered, it means that the construction of the bridge has been completed. Most of the existing bridge core stones in Jiading are square, decorated with swirling and auspicious moire patterns in the middle.

It is believed that patterns are extended from the Buddhist word “swastika.” Revolving around the center of a circle implies the orderly circulation of all things as well as the meaning of low tide and peaceful life.

Dragon gate stone usually appears on stone arch bridges built after the mid-Qing Dynasty (1644-1911), which is beneath the core stone but atop the arch. Dragon pattern and the pattern of carp leaping over dragon gate are the most widely adopted decoration.

Ancient people believed that they could play a divine role in damming the tide and protecting the river course, reflecting the good wishes of people who live in water towns. The stone can be found on Gaoyi Bridge and Tian’en Bridge. 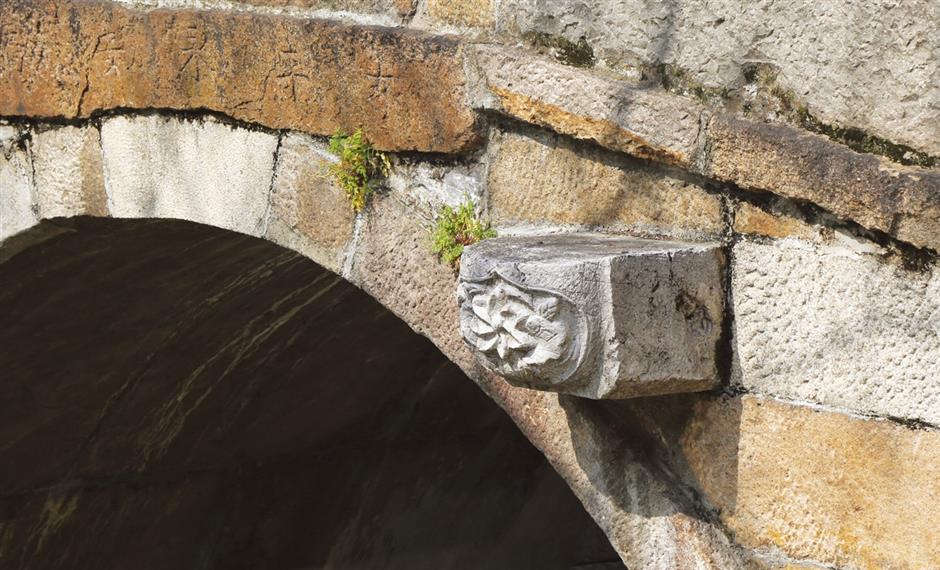 Side stones are on both sides of stone arch bridge, commonly known as bridge ears. They are used to fix the arch and the bridge. Side stones on the existing stone arch bridges built before the Ming Dynasty in Jiading usually feature lotus patterns, such as Binxing, Puji, Yongning and Taiping Yong’an bridges.

The lotus is the symbol of Buddhism. Puji and Yongning bridges were built by monks in the Yuan Dynasty (1271-1368), so this kind of carving may be related to the prosperity of Buddhism at that time.

Above the four side stones of the Wangxian Bridge, Buddha statues are carved to protect passers-by and boats.

There are occasional carvings on arch stones at the lower part of the arch. Usually, the names of the people who have contributed to the construction of the bridge are engraved.

On both ends of a bridge, there are sometimes couplet stones with decoration of lotus leaves on the top and lotus flowers at the lower part. Unlike stone arch bridges, the carving of beam stone bridges is relatively simple and plain, mostly at the two ends of the bridge deck, with a variety of scroll patterns to form the patterns of ganoderma (meaning “as one wishes”), auspicious clouds, and among others, implying peaceful and auspicious, simple and elegant.

Ancient bridges in jiangnan often have couplets on both sides of the bridge. Reading these couplets carefully it is not difficult to find the thoughts and feelings of the ancestors who wrote couplets as well as the social values reflected by the couplets.

Most of the existing bridge couplets in Jiading are on stone bridges built after the middle and late Qing Dynasty. Short or long, the couplets feature different styles and elegant writing. Some are catchy and easy to understand while others are fresh and profound.

Name of the bridge

It is not surprising that there are bridge names, but there are multiple cultural connotations behind the names of the bridges. Among the existing ancient bridges in Jiading, more than 80 percent of them were named by prayer words, such as Yongning, Yong’an, Yongfu, Yongnian, Wanshou, Wanlong, Wanshun or Jili, Taiping, Xinglong, Juxing, Fusheng and Tian’en.

These bridges were built in different times but their names are with the same or similar meanings which reflect the locals’ desire to pray for good fortune and avoid evil, the pursuit of fame and fortune, longevity, safe travel, the revelation of literati’s refinement and interest, and the warning of admonishing and punishing evil.

It is not easy to build bridges in jiangnan and building a bridge is a very good move.

The ancient people always tried to tell this to future generations, and the bridge names may contain this meaning. Most of names of these bridges are Minxiu, Puji, Guangji, Gaoyi, Deze, Defu, Jushan and so on with the meaning that benevolent acts contribute to the people and society.

In addition, there are also ancient bridges named after people who have certain influence or those who build bridges, such as Chenjiaqiao (Chen’s bridge), Baijiaqiao (Bai’s bridge) and Zhujiashiqiao (Zhu’s stone bridge).