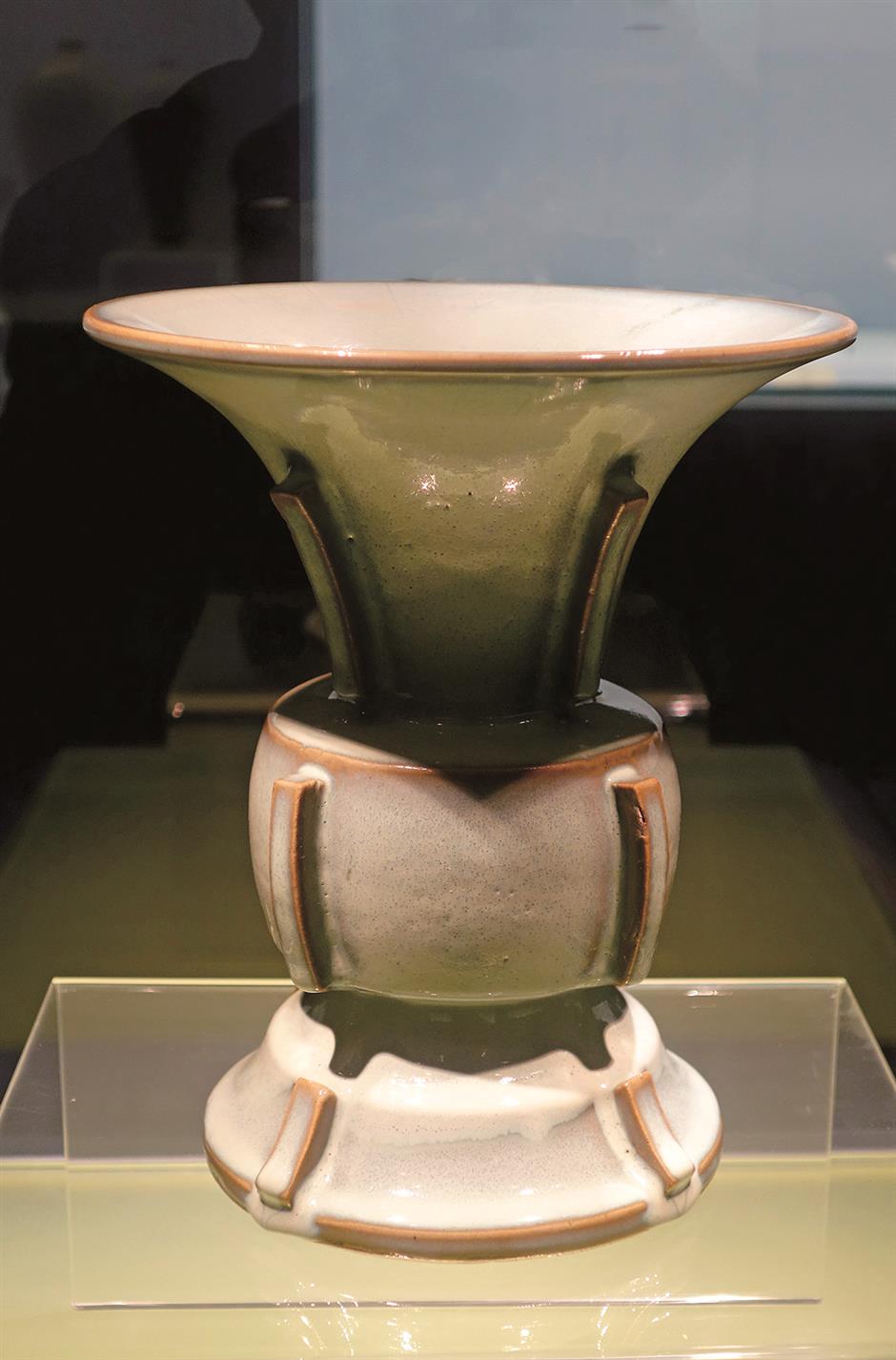 The Shanghai Museum is a state-of-the-art gallery holding many exquisite artefacts. In the ceramics collection, an elegant vase stands out from the rest for its simplicity. It is the Moon-White Glazed Zun (vase) with Protruding Ridges.

This ceramic has an everted rim, turning sharply outwards and upwards from the shoulder. Narrow-necked with a globular body, the moon-white zun has three components. Each has four symmetrical protrusions, adding to its elegance. A smooth white glaze coats the vessel, with a subtle blue luster.

The Five Great Kilns — Guan, Ru, Ge, Ding and Jun — were famous for their production of Chinese ceramics during the Song Dynasty (960-1279). The Moon-White Glazed Zun is a type of Jun ware.

One characteristic of Jun ware is its colorful glaze, ranging from sky blue to moon white, rose purple to brownish-red carnelian. While the body of the ceramic is coated moon white, the rims and protrusions of this vessel have a faint yellow tinge and are of a thinner glaze.

Legend has it that the Moon-White Glazed Zun is associated with Han Zhongli, one of the Eight Immortals. In Chinese mythology, the Eight Immortals were ordinary humans who were granted everlasting life because of their good deeds.

One day, the Eight Immortals received an invitation to the Queen Mother of the West’s peach banquet. It is said that the Queen, the goddess of life and immortality, lives in the Kunlun Mountains — one of the longest mountain ranges in Asia, forming the northern edge of the Tibetan Plateau south of the Tarim Basin — where the peaches of immortality grow. Every 3,000 years, the peach trees bear fruit. When this happens, the Queen hosts a peach banquet, inviting all the immortals to celebrate her birthday.

The Eight Immortals were thrilled to be invited. For the Queen’s birthday gift, they would craft exquisite ceramics with their magic powers.

While the Eight Immortals were examining each other’s gifts, a bright beam of light burst from the sky. An exquisite white-glazed porcelain appeared before them. It was the Moon-White Glazed Zun, a piece of fine craftsmanship forged with Han Zhongli’s powers.

The Eight Immortals’ gifts were offered to the Queen, who was pleased to receive presents of such skilled handiwork. Still, the most favored gift was Han Zhongli’s Moon-white Glazed Zun with Protruding Ridges.

While the story behind this vessel is common in households across China, others believe that its origins can be traced back to Emperor Huizong of Song (1082-1135) instead. Emperor Huizong was considered a fatuous king who led an extravagant life. During his 26-year reign, he was more absorbed in building lavish buildings, including an imperial garden. To beautify the garden, the emperor gave imperial orders to craft more Jun ware to display his rare specimens.

One day, Emperor Huizong was admiring the beauty of his Jun ware. While he was pleased with its enchanting colors, he started having second thoughts. He wondered: “These vases are exquisite, but certainly cannot be called simple. Is there a way to craft Jun ware to be more modest and elegant?” One of the quick-witted officials suggested, “Why not sculpt Jun ceramic similar to bronze ware to keep a minimalistic look?”

In ancient China, bronze ware was commonly used as a ritual container to hold wine. Such vessels had an everted rim and a round body.

The emperor was pleased with the suggestion and put the official in charge of firing simple yet elegant ceramics.

Yet, the emperor’s neglect for state matters eventually led to the demise of the Northern Song Dynasty. In 1126, he led a disastrous war against the Jin empire and later got taken captive. Emperor Huizong’s imperial garden was destroyed, along with a great number of precious Jun wares. The Moon-White Glazed Zun, however, managed to escape. The ceramic’s rare beauty was appreciated by emperors of successive dynasties. It was kept within imperial grounds and passed down through generations.

In the late Qing Dynasty (1644-1911), under Emperor Puyi, there was a dramatic outflow of imperial treasures. Unlawful merchants took advantage of the state’s chaos and unrest and sold these treasures overseas. To protect ancient Chinese artefacts, a group of patriotic citizens banded together. A man who made notable contributions to preserving historical treasures was Hu Huichun.

Hu was an avid collector, especially of ceramics. Once, he was out at the antiques market with a friend. Hu made a beeline for a ceramics stall and an elegant vessel caught his eye. Standing tall at 26.1 centimeters, this ceramic has a thin layer of light brown glaze at the bottom. When Hu flipped over the ceramic and found a number 5 carved onto the bottom, he was elated. He knew that he had found a treasure of the Song Dynasty.

Jun porcelain was numbered to indicate sizing during the Song Dynasty. To help the palace in ordering, numbers from 1 to 10 were used, with 1 being the largest and 10 the smallest.

Hu suspected that the ceramic he discovered dated to the Northern Song Dynasty. Without further hesitation, Hu bought the vessel, and it is the Moon-white Glazed Zun that we know today.

In 1988, the Shanghai Museum received a special guest with a letter of attorney. It turned out to be Hu’s son-in-law, Fan Lirong.

He flew from the US specially to convey Hu’s intentions to donate well-kept national treasures to the museum.

Having been overseas for years, Hu missed his home country terribly. By donating over 70 artefacts to the museum, including the Moon-White Glazed Zun, Hu hoped it allows people to better appreciate ancient Chinese treasures.

The Moon-White Glazed Zun with Protruding Ridges is currently exhibited at the Shanghai Museum.