Quite a few masterpieces of traditional Chinese painting portray emperors as symbols of supreme power. These include a series of 12 mammoth scrolls collectively known as Kangxi Nanxun Tu, or “Emperor Kangxi’s Southern Inspection Tour.”

With a uniform height of 67.8 cm and lengths between 1,400 and 2,600 cm each, the 12 ink-and-color on silk scrolls depict Emperor Kangxi (1654-1722) of the Qing Dynasty (1644-1911) taking an imperial inspection trip from Beijing, the capital, down to economic and cultural centers in east China’s Jiangsu and Zhejiang provinces.

Located in the delta region of China’s longest river, the Yangtze River, this area has long been called a “Paradise on Earth” in China thanks to its agriculturally conducive weather and abundance of resources. Also known as Jiangnan, or “South of the River,” it has long been deemed part of southern China in a broad sense, particularly in the eyes of those living in the north, despite the fact that Jiangnan is geographically part of east China.

Such “southern” inspection tours were of strategic significance to Qing rulers. During his 60-year reign, Emperor Kangxi made a record six imperial inspection trips to the south. This is mainly because the Qing Dynasty was established by Manchus, an ethnic minority from the northeast China. The southern inspection tours were designed to help Manchu rulers familiarize themselves with the majority Han people and win over their support to the Qing rule throughout the empire.

The 12 scroll paintings created by Wang Hui (1632-1717), the most celebrated painter of his day, and a number of assistants, documented Emperor Kangxi’s second inspection tour of the south in 1689. Wang was handpicked by the emperor himself to be the chief artist of the assignment.

It took Wang and his assistants more than three years to complete the paintings.

Being both a documentary and official artwork, the 12 scroll paintings feature neat and meticulous composition and brushwork as well as great technical virtuosity.

Wang and his artists employed many traditional Chinese landscape painting techniques. For instance, they used a continuously changing perspective to depict different scenes and objects in the foreground, middle ground, and background.

This was quite different from the one-point linear perspective widely used in Western landscape paintings.

Despite the fact that Emperor Kangxi had to appear in every one of the scrolls as the central character, Wang filled the paintings with many traditional Chinese landscape elements, such as mountains, rocks, rivers, waterfalls, boats, pavilions, huts and figures.

In addition, Wang borrowed some ideas from traditional Chinese panorama paintings portraying scenes from everyday life, such as the famed Chinese painting “Along the River During the Qingming Festival.”

Art critics and historians have praised the 12 scrolls as a treasure of artistic and historical significance, as they reveal numerous details about life in late 17th-century China.

However, just like most paintings executed by imperial court artists, the 12 scrolls have also been criticized by some art critics as lacking the originality and spontaneity found in works created by China’s amateur literati painters.

The 12 scrolls were originally housed in the imperial court of the Qing Dynasty, but they were later taken out and scattered.

Today, only nine of them are known to still exist, with five residing in the Palace Museum in Beijing, two in the collection of the Musée Guimet in Paris, and two in the Metropolitan Museum of Art in New York. 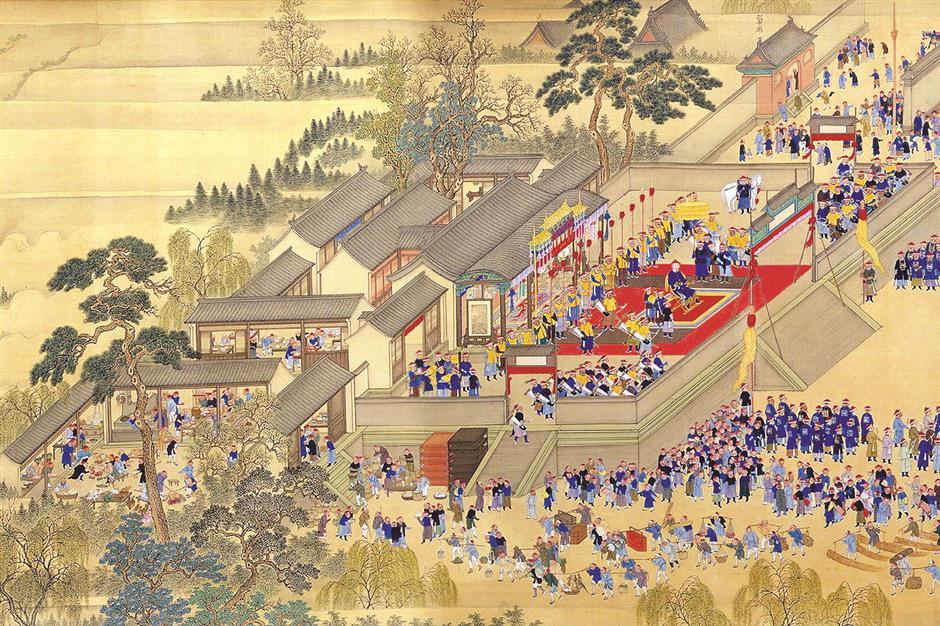 Artist: Wang Hui and his assistants