Finding his own language to express his art 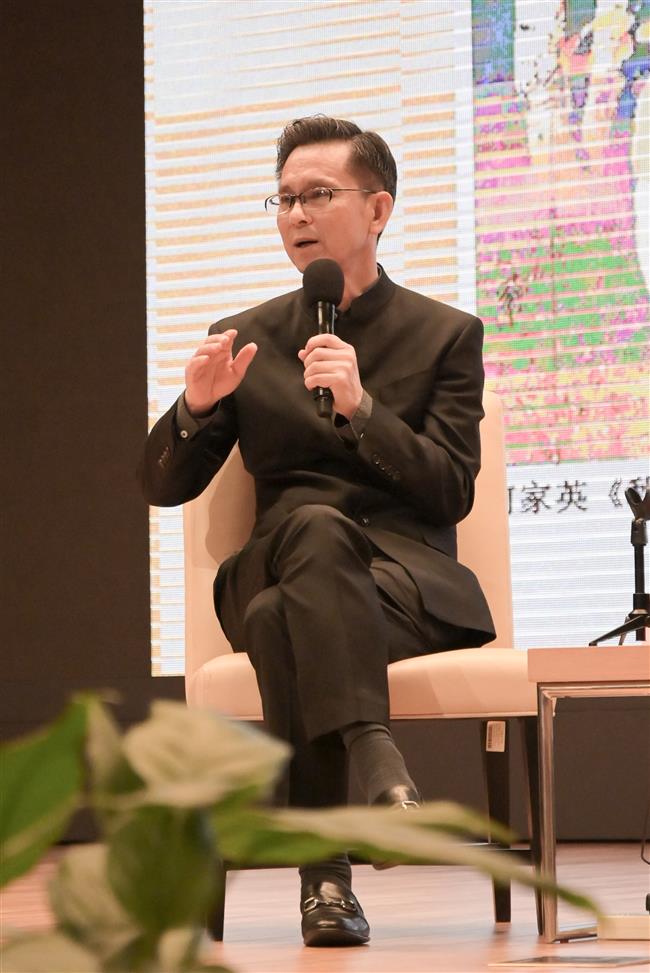 He’s art exploration echoes the evolution of Chinese contemporary art over the past four decades.

As a participant in and witness of the country’s development, he uses his brush to express his feelings and thoughts.

“To some extent, my art and I are growing with the country,” He said.

His teens were spent in the “cultural revolution” (1966-76), when he learnt basic skills to draw propaganda posters.

In 1974, the 17-year-old, like other “intellectual youth,” was sent to a remote village to “support China’s rural construction with knowledge.”

To dig trenches of 10 cubic meters was his daily job.

He always brought a pad to sketch the farmers and the landscapes, whenever he took a break.

In 1977, he was admitted to the Tianjin Art Academy as the last batch of farmer students, where he could finally dedicate heart and soul to painting.

“Like a sponge absorbing water, I learnt as much as I could,” he recalled.

With a goal of combining Chinese and Western styles and blending the precise-execution and freehand modes of painting, he synthesized Western realism and Chinese expressionism into a single style.

It is one that unites the precise and subtle with the bold and unrestrained. 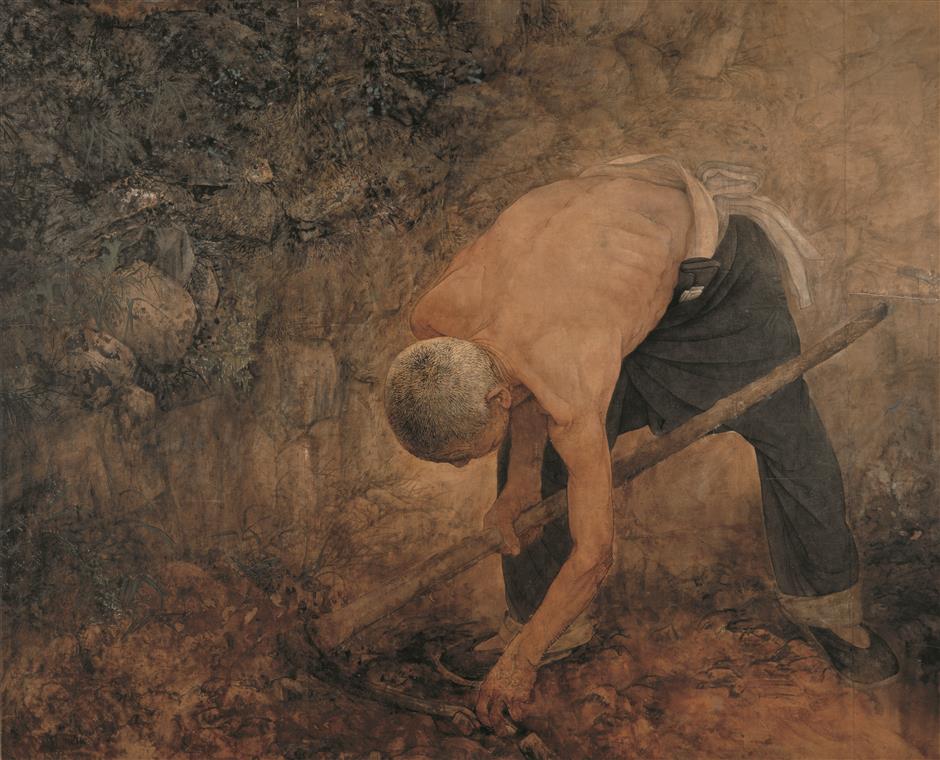 The “Uplands” was a new exploration, both in theory and in practice, which goes contrary to traditional gongbi.

Inspired by the grandeur and solemnness of a mural exhibition he visited in Beijing in 1983, He entirely broke the conventional structure, layout and use of color of traditional Chinese painting.

The stone-laid dam and grass were all directly sketched from nature, while the black rocks were painted by a “waxing” method to render different layers of ink, which vividly revived the rock texture.

However, the old man and his pants were true gongbi lines.

“People might mistake it as an oil painting at first glance,” he said.

“But it is actually a Chinese ink one.”

The painting won him the grand award at the 6th National Arts Exhibition.

But he returned to tradition, instead of going further, after the “Uplands.”

“When I was learning more about Western painting, I started to look back again on the traditional Chinese style, which I found more open and profound,” he said.

In 1985, He painted “The Girl of Mizhi,” a more traditional one yet still with the painter’s unique interpretation.

With a diagonal composition, the picture depicts a woman in northwest China’s Shaanxi Province concentrating on sewing clothes at the bottom left, while in the upper-right corner the painter wrote a long inscription.

He pioneered a new style in this painting with fine, meticulous lines and the near-flat coloring technique, which helped highlight the traditional Chinese woman’s introverted and reserved personality.

The original model was a young woman he met on one field trip to the rural suburbs of Hebei Province.

“She was of traditional Chinese beauty, with a slender waist, big hips and sloping shoulders,” He recalled. “I observed her when she was doing the stitches and took pictures of her.”

Multiple field trips to China’s vast countryside during the early 1980s gave He great inspiration, and many of his well-known, award-winning paintings were finished at that time.

“I realized that Chinese gongbi has a great capacity to combine the Western and Chinese painting styles, the colors and the details, the old and the contemporary,” he said.

Always with an open mind and innovative spirit, He never stops his art exploration. 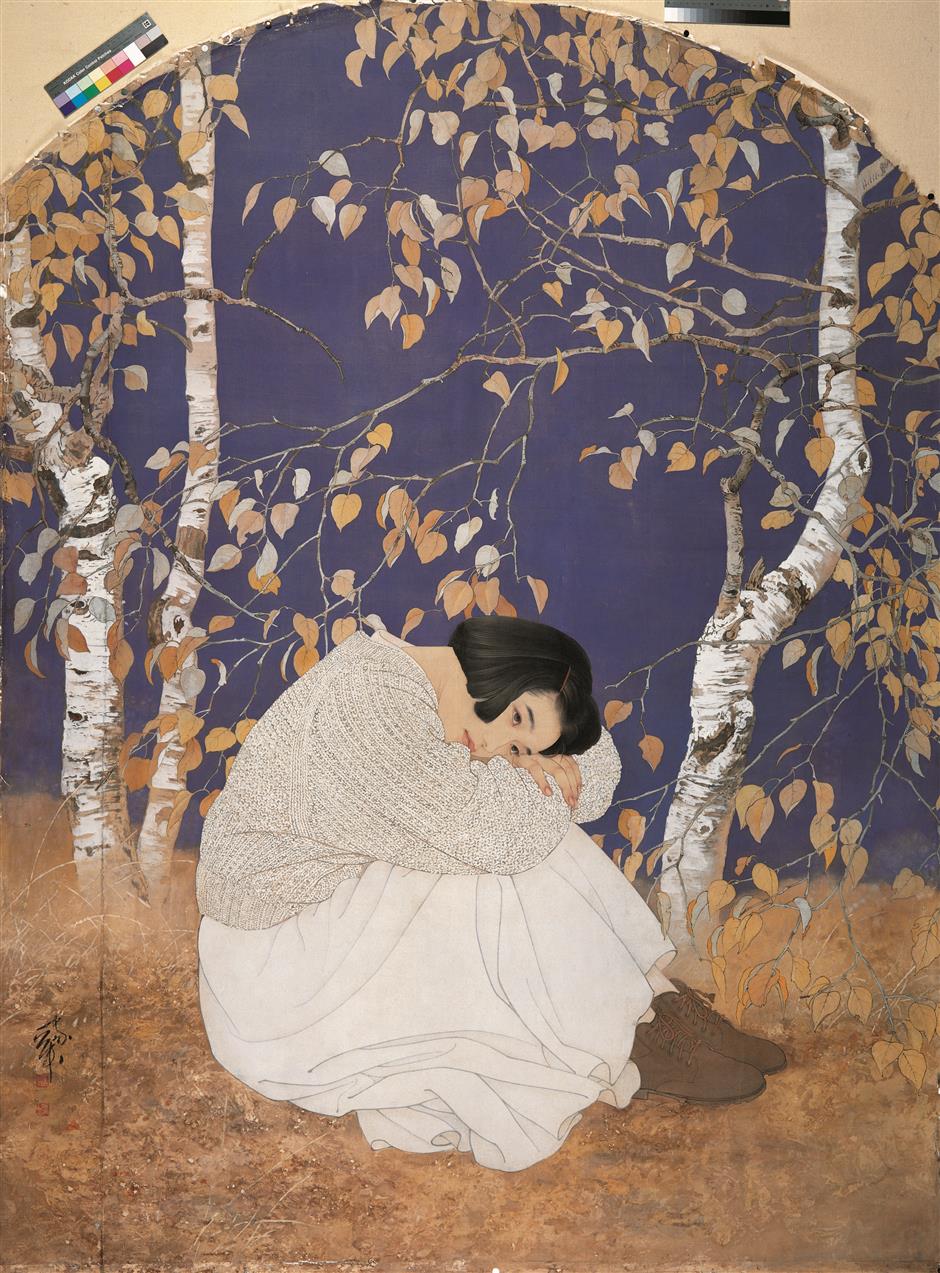 “Nightfall in Fall” in the early 1990s was another breakthrough in traditional Chinese painting, which took him three months to complete.

“To paint the girl’s woolen sweater took me one week,” he recalled.

He used lifen, a technique to create a relief-like effect by accumulating thick pigments, to highlight the white sweater’s texture. “People were stunned to find I used this technique because it was always applied in painting flower’s stamen or pistil,” He said.

The work was a huge success, pioneering a new style that inspired many younger painters.

“I think it’s important for an artist to explore his or her own artistic language of expression. For me, I’ve chosen gongbi, and try to find the conjunction of the Western and Chinese styles with my own interpretation,” He said.