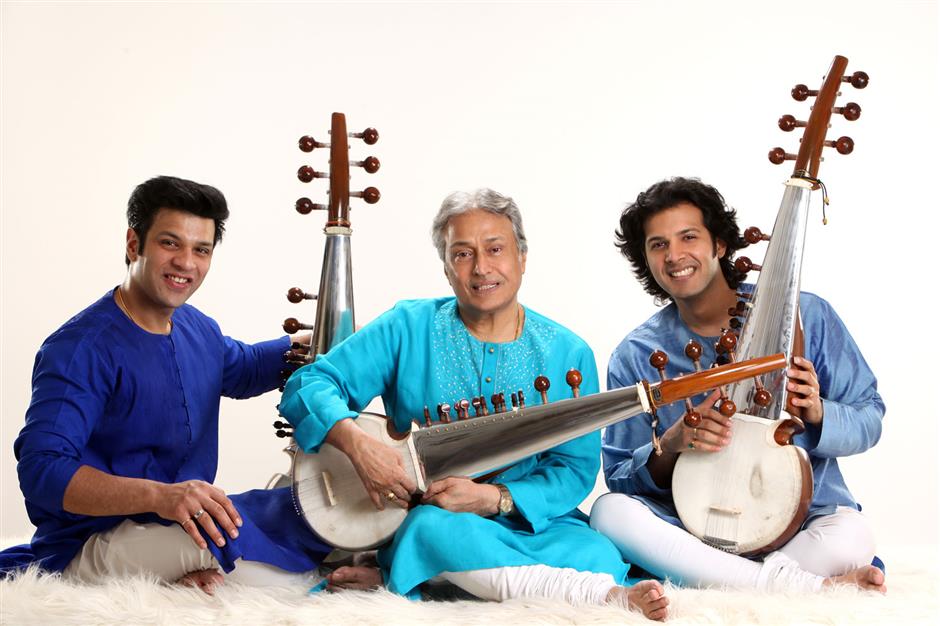 Amjad Ali Khan has tutored his two sons, Amaan (left) and Ayaan, both of them accomplished musicians today.

There are probably very few musicians in the world who can claim to have as long and illustrious lineage as Ustad Amjad Ali Khan, a sixth-generation sarod player. Khan’s forefathers reworked the rubab, a lute-like stringed instrument from Afghanistan, over 200 years ago and passed on the skills through generations.

The link has never broken.

Khansaab, as he is respectfully addressed, himself started learning the sarod at a very early age from his father Haafiz Ali Khan, a court musician in pre-Independent India. On his part, he has tutored his two sons, Amaan and Ayaan, both of them accomplished musicians today, to maintain the chain of continuity. On special occasions, like UN Day and Nobel Peace Prize concerts, they share the stage with their renowned father to enthrall a worldwide audience.

The trio will perform in Shanghai on June 15 and in Guangzhou, Guangdong Province, on June 18, courtesy of the Chaiti Art Foundation. The Khans will be accompanied on stage by Satyajit Talwalkar on the tabla (twin drums) and Sridar Parthasarathy on the mridangam (percussion) in what is expected to be a celebration of grace, beauty and subtleties of a unique classical genre. Together, they promise an evening of high intensity to the furious accompaniment of the percussion masters.

The silver-haired maestro, now 73, has been carrying the melodic strings of the sarod since the age of 12.

“My first foreign tour was in 1963,” Khan told Shanghai Daily during an exclusive conversation at his plush residence in New Delhi. “I traveled for two months in America. When I came back, I didn’t go back to the school. I couldn’t complete school ...”

The suave and soft-spoken Khan said the break helped him in shaping his outlook on politics, religion, music and life in general.

“I was busy, traveling and performing regularly. I never learned anything from any books. It was all my personal observations — observations and decisions — because I never wanted to follow the conventional way of life.”

Khan’s music can best be described as mellifluous. The fretless, stringed instrument, which derives its name from the Persian word “sarood,” or melody, sits easily on the lap and allows the performer to “slide and glide” through the musical notes.

The range of emotions that Khan manages to evoke from the instrument is the reason why the sarod holds such a pride of place among music enthusiasts.

His musical journey started six decades ago and Khan, unsurprisingly, has picked up accolades and recognitions galore — notably a Grammy nomination, a UNICEF ambassadorship, the Fukuoka Cultural Grand Prize and the Crystal Award at the World Economic Forum — besides a host of other awards and titles at home and abroad.

In an incredible honor, the US state of Massachusetts declared April 20 as Amjad Ali Khan Day in 1984, while Houston in Texas and Nashville in Tennessee have made him an honorary citizen. 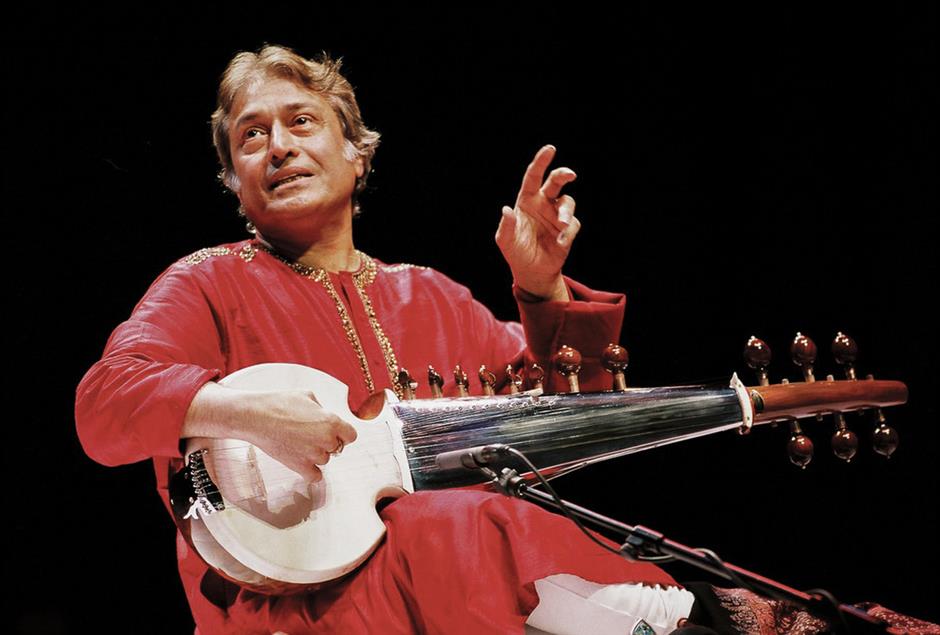 Courtesy of The Darbar Festival

The 73-year-old maestro has been carrying the melodic strings of the sarod across the world since the age of 12.

In a free-wheeling interview that lasted close to two hours — well over our scheduled time — Khan opens his heart out and speaks at length about his long career, his musical beliefs and the excitement of performing in China for the first time.

Q: You will be performing to a completely new audience in China. What can they expect from you?

Khan: It is a great honor and pleasure for all of us — Amaan, Ayaan and me — to perform in China. I have performed all over the world but not in China. So I’m looking forward to it. I have visited Shanghai before but not as a musician. It was a great experience.

I have always felt that there is so much in the culture of China and India. The common Chinese melodies are basically pentatonic melodies. Those five musical notes are very common to us also; we have different names but we use the same five notes. So, musically there is something we have in common.

I also have great regard for their craft. In the world of music today, Yo-Yo Ma is a big name and young pianist Lang Lang is doing very well. Recently, we were performing with the New Jersey Symphony Orchestra and the conductor was a Chinese lady, Xian Zhang. She was very energetic and very, very capable. She was conducting my orchestral piece “Samagam.” We performed for three days consecutively. I am excited and really looking forward to this opportunity (to play) in China.

Q: The sarod is a relatively unknown instrument to the Chinese even though Amaan and Ayaan have performed in Shanghai before ...

Khan: Those who can appreciate guitar, pipa, Chinese symphony, European music, violin or cello, I ask them to experience the sound of sarod. Sarod belongs to the family of pipa, guitar and banjo, but sarod has a different tonal quality. The meaning of sarod is music. It is my request and appeal (to the Chinese) that they must experience the sound of sarod at least once.

Take the risk and come and hear us play the sarod. I’m sure they will enjoy and get some happiness and pleasure through our music.

Q: How will you define Indian classical music to the uninitiated?

Khan: In Indian classical music, the most salient features are slides and glides. These slides and glides, ornamentation is the most precious gift in our music. The important factor is presentation; there is grammar of music, there is literature of music but very few musicians reach the level of poetry.

Rabindranath Tagore was an amazing composer and poet. He composed songs based on every raga but while playing his compositions, I realized that he took liberty with all the ragas. If it was Raag Bihag, he added some other note into it which sounded much nicer and beautiful.

*Raga is an unwritten composition that evokes different emotions, seasons and colors. While Western classical music is composed and written down, Indian classical music is taught orally and largely improvised. The melody is created from different ragas and every Indian musician has his or her own interpretation of the ragas, making every concert unique and different.

Like Tagore, only geniuses can take liberties; mediocre blindly follow the convention. That is why I feel that presentation is an important thing.

I must tell you this interesting anecdote: We were asked to perform at the Noble Peace Prize function, but only for five minutes! I was in shock ... it didn’t make sense going all that far to Oslo and perform for five minutes! Then the importance of the occasion dawned on me, and we agreed. After the performance, I realized that all the great masters became famous because of their three-minute records — the 78rpm. Three minutes is all that you need. Music is the name of quality, not quantity. It should be appealing. If it isn’t, it is the fault of the musician not the listeners. I think our five-minute presentation in Oslo has been viewed by 5 million people around the world.

I also tell my listeners please don’t try to understand music. Only people who are learning music try to grasp the technicalities. The duty of the listener is to enjoy. You are not supposed to know what is raga and what is tala (a rhythmic pattern); just involve yourself to the sound and rhythm, that’s all.

Q: India is known for its diversity. How much of that has influenced your music?

Khan: Every country, region is blessed by a definite kind of melody. In our country, we have beautiful folk music in Rajasthan, West Bengal, Gujarat, Himachal Pradesh and other states. The identity of every region is in their music. I have always admired folk music. It has color and beauty. I mean, have you seen the folk dances of Rajasthan? They are so colorful. Folk music is the most ancient, most natural kind of music. Classical music was organized. Folk music is our identity.

Q: You have stayed away from fusion. Any particular reason for that?

Khan: I have been working with symphony orchestras. That is also a kind of fusion. The word “fusion” has been abused. Some fusion is appealing and others disturbing. I prefer to call it collaboration — a collaboration of European classical music and Indian classical music. My orchestral composition “Samagam” was first presented in Scotland 10 years ago. We have been performing it over the years. I am working on my second composition but it will take some time, maybe about six months. Some day I would like to collaborate with a pipa player in China because it has something very common with sarod.

Q: How does it feel performing on stage with your sons?

Khan: It is a very spiritual feeling, very sacred and emotional for us ... a great occasion. But I have to appeal to all my media friends that please don’t compare us — with each other or with me. It’s not very healthy. As their guru, I think they are both on the right track and they don’t sound alike. They are not identical. They have their own individual identity, opinion and expression. So we are three different human beings on the stage. Just enjoy and encourage and appreciate all of us.