The Kwok brothers' Wing On Department Store and their twin wishes

Tucked away behind a stylish garden on Nanjing Road W., a pair of century-old white villas remain elegant, the homes of Chinese merchant brothers surnamed Kwok (usually referred to as Guo in pinyin).

The twin villas also mirrored the development of Nanjing Road, often called Shanghai’s Fifth Avenue. The former landlord, the Kwok brothers and architects of the villas were connected with each other and interwoven in the history of this legendary road that symbolized old Shanghai. 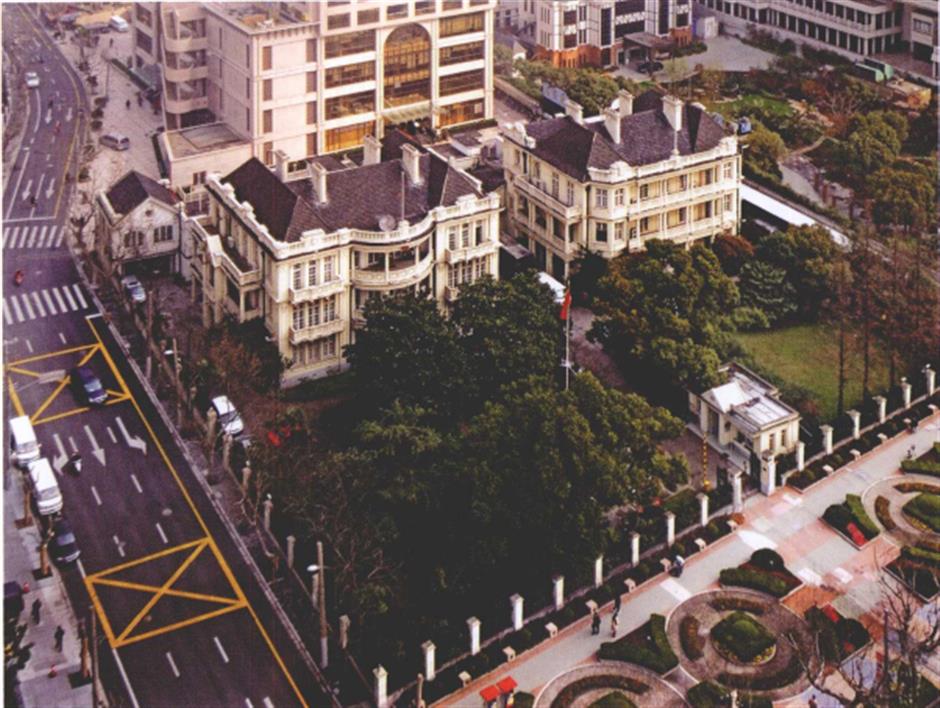 According to Lou Chenghao and Xue Shunsheng’s 2008 book “Shanghai Old Houses,” the twin villas were built in the 1920s for Kwok Lok and Kwok Chuen, who returned from Australia and opened the Wing On Department Store on Nanjing Road.

The twin villas, each at around 1,200 square meters, feature three floors in a French classic style. The juxtaposing houses look harmonious with each other but they are not identical.

The eastern villa for the elderly brother Kwok Lok is designed with a comparatively flat façade while the western one, for younger brother Kwok Chuen, is graced by curved verandas in the front.

The garden shared by the villas is also well-designed with lush trees, rockeries and a tiny stone bridge that links with a stylish fountain. Inside, a big, beautiful wooden staircase leads to bedrooms which are all spacious and decorated with teak-wood dado. 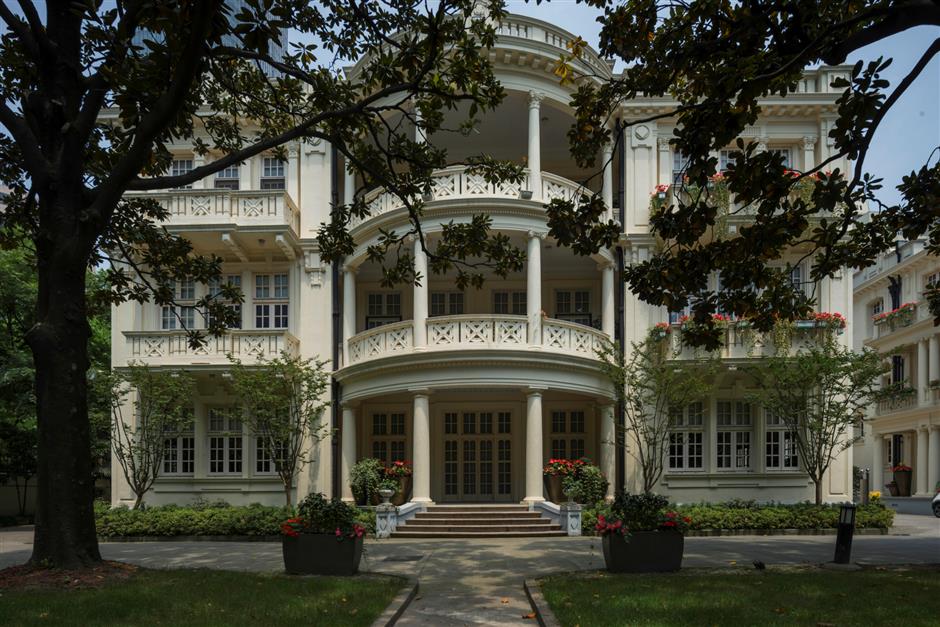 The twin villas feature three floors in a French classic style. The juxtaposing houses look harmonious with each other but they are not identical. The western one for younger brother Kwok Chuen is graced by curved verandas in the front.

Perched on the prominent location of the Bubbling Well Road (today’s Nanjing Road W.) and Hardoon Road (today’s Tongren Road), the site of the villas belonged to Jewish tycoon Silas Aaron Hardoon, who owned half of the properties along Nanjing Road in the early 20th century. Hardoon’s own home, the renowned Aili Garden, was on the other side of Nanjing Road W, which is today’s Shanghai Exhibition Center.

It’s not the first time that the Kwok brothers made a deal with Hardoon. In the 1910s, they rented a piece of land at a hefty price from the tycoon on the eastern side of Nanjing Road for building Wing On Department Store which turned out to be a successful investment.

The Wing On Department Store was the second of the four big Chinese department stores on Nanjing Road — the other three being Sincere Co, Sun Sun and The Sun. 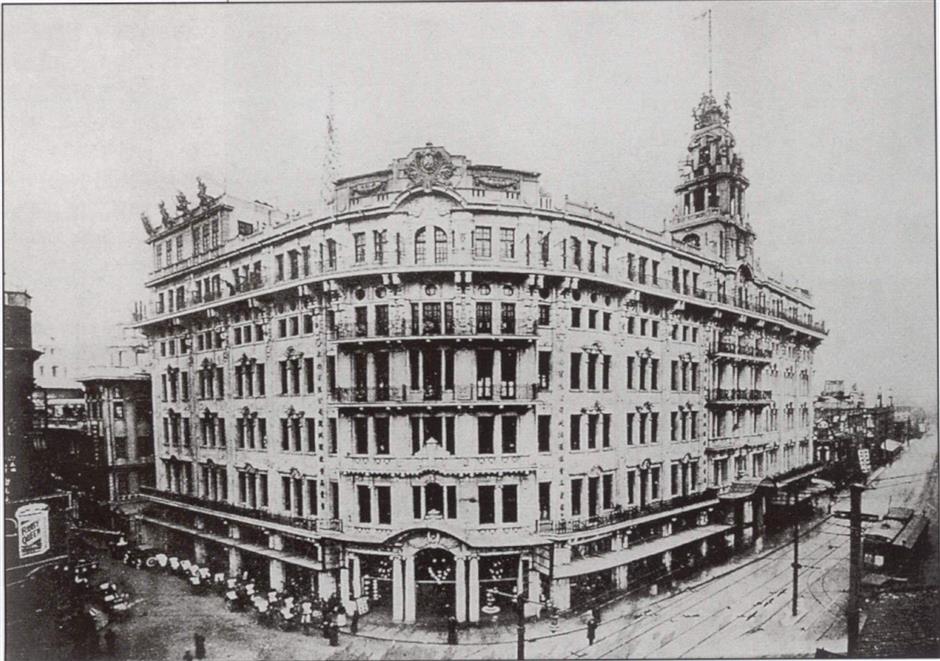 “Wing On not only enjoyed better business than the first one, Sincere Co, but also built the tallest building on the popular shopping street,” says Zhang Yaojun, a researcher at the Shanghai Archives Bureau who had studied archives left by the four big stores. According to his research, the Kwok brothers, quite like owners of the other three big stores, were born in China’s Guangdong Province and left home at an early age for Australia where they earned first bucket of gold from fruit wholesale business. With an idea to save China through commerce, they returned to start up business for the second time. Though these big stores had achieved successes previously in Hong Kong and Guangzhou, their founders all cast eyes on Shanghai, particularly the city’s most expensive shopping street — Nanjing Road.

After calculating the amount of pedestrians on both sides of Nanjing Road by throwing beans into two empty bags, the Kwok brothers decided to rent the site on the southern side of Nanjing Road which appeared to attract more people to walk by. The land was owned by Hardoon who asked for a big price and a strict contract — ownership of both the building and the site would both return to Hardoon after 30 years.

According to Shanghai historian Shen Ji’s research, Hardoon preferred to retain his best sites for big department stores and big companies, for the best rental price. After signing contract with the Kwok brothers, he rent another site opposite Wing On to the third big department store, Sun Sun Co. Later on he made the same contract with Chinese-owned Continental Bank by renting a land on the crossroad of Nanjing and Jiujiang roads for constructing the Continental Emporium. All these buildings built on Hardoon’s land on Nanjing Road remain today and still function as big stores.

“The Kwok brothers agreed to the deal after careful considerations. Though the construction of the store was delayed due to funding problems, time proved their visions correct,” says Zhang. 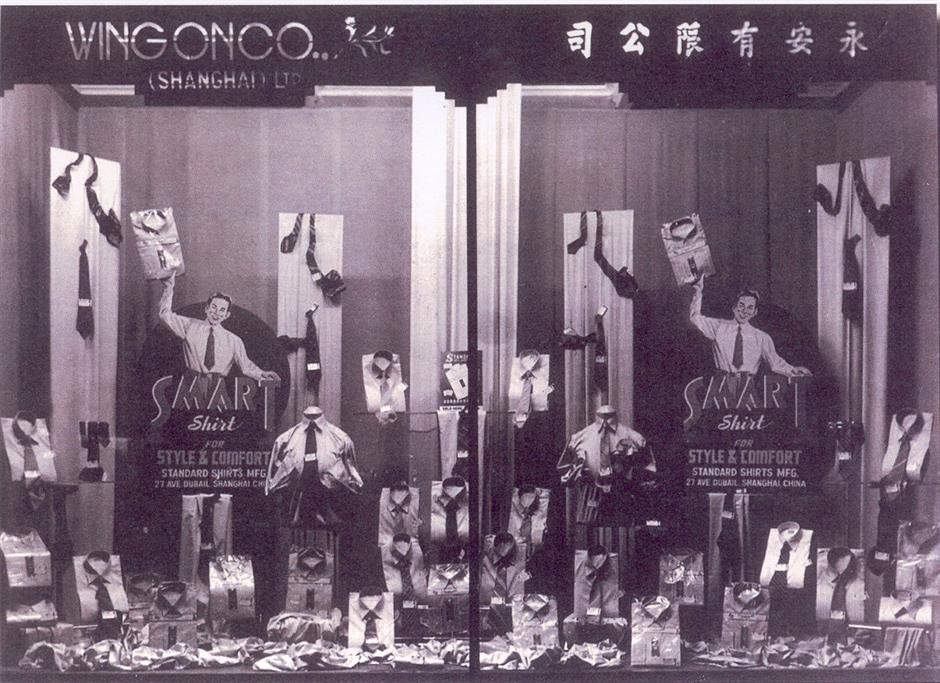 Window display was introduced to engage with the shoppers.

After choosing the site for their new store, the Kwok brothers decided to name the new store Wing On, literally meaning “perpetual peace.” The name originated from their fruit store in Australia showed their expectation to make safe and stable business in the fierce commercial competition. And they made it with wits and strategies.

In 1932, Wing On constructed a new 19-floor building on the triangle-shaped site adjacent to the 1918 premise which was the tallest building on Nanjing Road of its times.

The store’s success was described as “a notable example of shop building in Shanghai on an architectural scale” by The Shanghai Times in 1918. The department store had roof gardens and offered a variety of entertainment options besides shopping.

The Kwok brothers’ Wing On Store and their white villas were designed by the same architectural firm — Palmer & Turner. 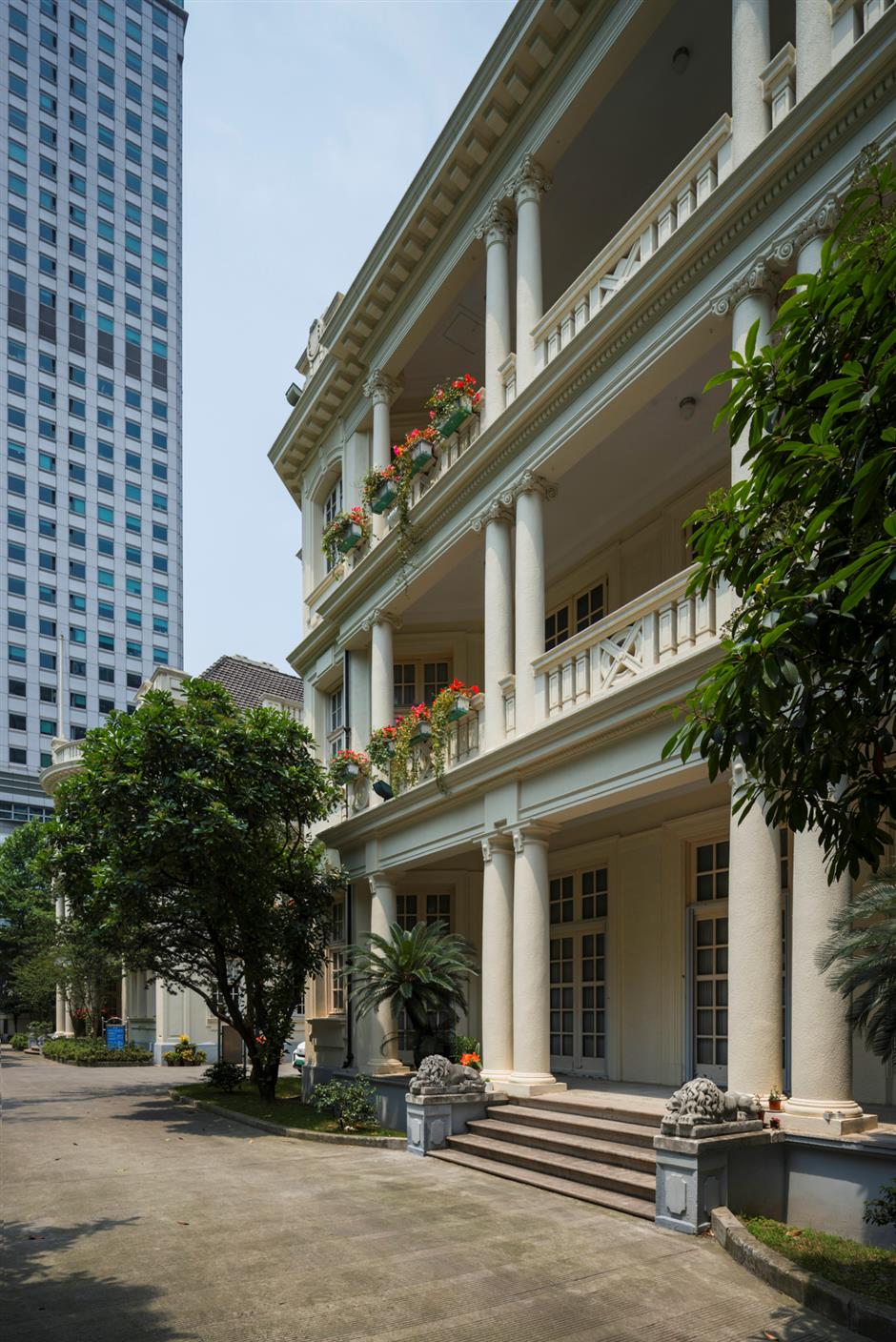 The eastern villa for Kwok Lok is designed with a comparatively flat facade.

Six years before the opening of Wing On Store, young architect George Leopold Wilson was sent by Hong Kong-based Messrs Palmer and Turner to expand business in Shanghai. With good luck and gifted talent, he got a first project, the Union Building which is widely known today as “No. 3 on the Bund,” did a great job and thus won a galaxy of noteworthy projects most of which are still glistening on the Bund and Nanjing Road area.

Founded by William Salway in 1868 in Hong Kong, the Palmer & Turner had a Chinese name “bama danna,” a Cantonese translation of its English name. As soon as the Union Building was completed, the firm moved its Shanghai office in, got a Chinese name “Kung-woo,” literally meaning “Fair and Harmony,” and developed quickly in this “Paris on the Wangpoo.”

Within decades the company created more than 30 excellent architectures in Shanghai, including nine of the 23 waterfront Bund buildings, such as the HSBC Building and the Sassoon House. In his book “A History of Shanghai Architecture 1840-1949,” Wu Jiang of Tongji University noted that “Palmer & Turner grew to be the largest and most important architecture design firm in Shanghai of the 1920s and 1930s. Their works were almost a mini collection of the Shanghai architectural scene.”

Both the Kwok brothers’ 1918 Wing On store and their 1924 white villas on the other end of Nanjing Road displayed Western classic style of the first period. 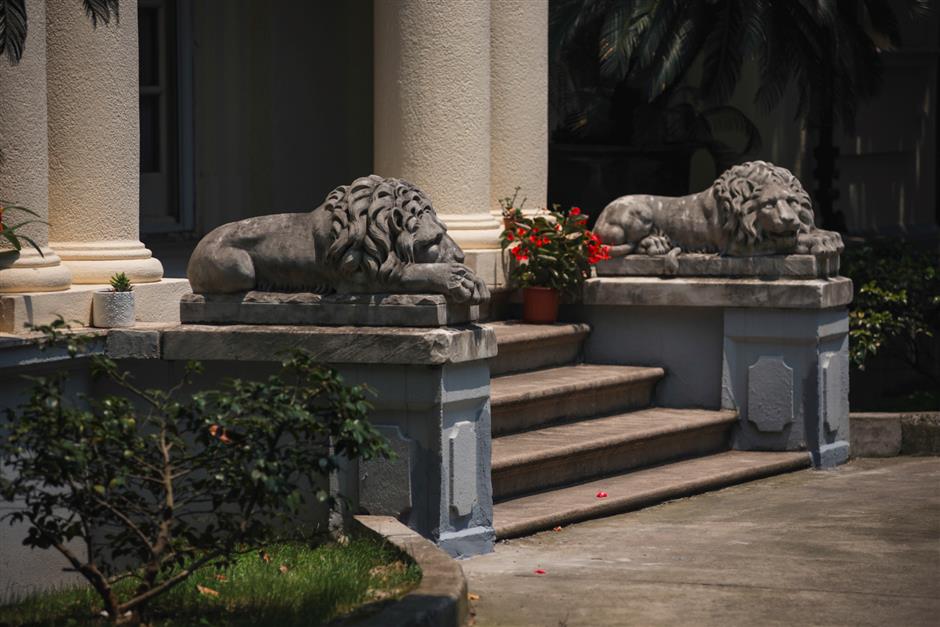 Two stone lions at the door of Kwok Lok’s villa

Today the twin villas serve as the administration offices for Shanghai Foreign Affairs Office and Shanghai People’s Association for Friendship with Foreign Countries (SPAFFC) to receive friends and official delegations from abroad. On the lawn fronting the white villas stands a copper sculpture with two embracing hands visualizing either a magnolia flower — the city flower, or a pigeon — the symbol of peace, the marble base of which inscribed with the word “friendship” in different languages, to symbolize the city’s sincere wish for more friends from afar. 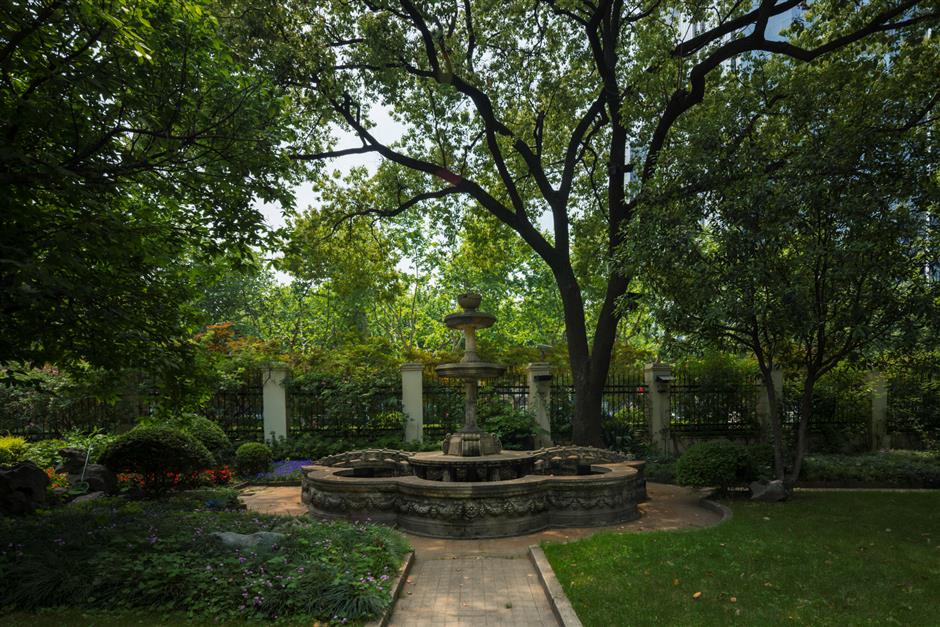 The garden shared by the villas is well-designed with lush trees, rockeries and a tiny stone bridge that links with a stylish fountain.

Tips: The villas are not open to the public but their facades can be admired from Nanjing and Tongren roads.

The store of perpetual peace: a Shanghai icon born in Australia

The store of perpetual peace is one of the best-known and most famous landmarks in Shanghai.

Its two-street front brilliant at night with neon light, its needle-like spire piercing the dark sky like a flashing sword — that is Wing On, a Shanghai institution.

For that is what Wing On means — perpetual peace. This great department store, always crammed with shoppers from basement to roof, has had a long and varied history and has grown to be one of the largest and most famous stores in the Far East.

Wing On is a glorified Shanghai Woolworth’s, combining low prices and high quality goods. Everything from safety pins to baseburner heater/stoves, from garters to rugs, from salt to socks, can be found in the teeming isles of the big store at the corner of Nanking and Chekiang Roads — one of the busiest crossroads in this city, and a fairyland of blazing light after nightfall.

Back in 1800, or the thereabouts, several astute Chinese merchants, living far from their Canton homes in Sydney, formed a small company and opened a small store in that Australian capital. These overseas merchants called their modest little shop Wing On.

The store brought rich returns to these self-exiled merchants. As it grew the merchants eventually returned to China.

In 1916, J.B. Lock, Kwok Bew, and others opened another Wing On store in Hong Kong. It proved so successful that two years later, in 1918, it was decided to form a new company and open a new store in the thriving metropolis of Shanghai.

The present Wing On store was capitalized at HK$2,500,000 (US$320,000). It has never moved, but it is not always as large as it is today. For 14 years, Wing On occupied a position along Nanking Road only — the large part of the store which fronts on Chekiang Road was added five years later, in 1923.

The store has grown by leaps and bounds, and today it is a thriving, wealthy concern, employing about 1,000 people.

Its many ramifications include three cotton textile mills in Shanghai which are associated with the store and combines many other outside interests. Its capital today is approximately US$10 million in 1931, and its business amounted to about US$15 million.