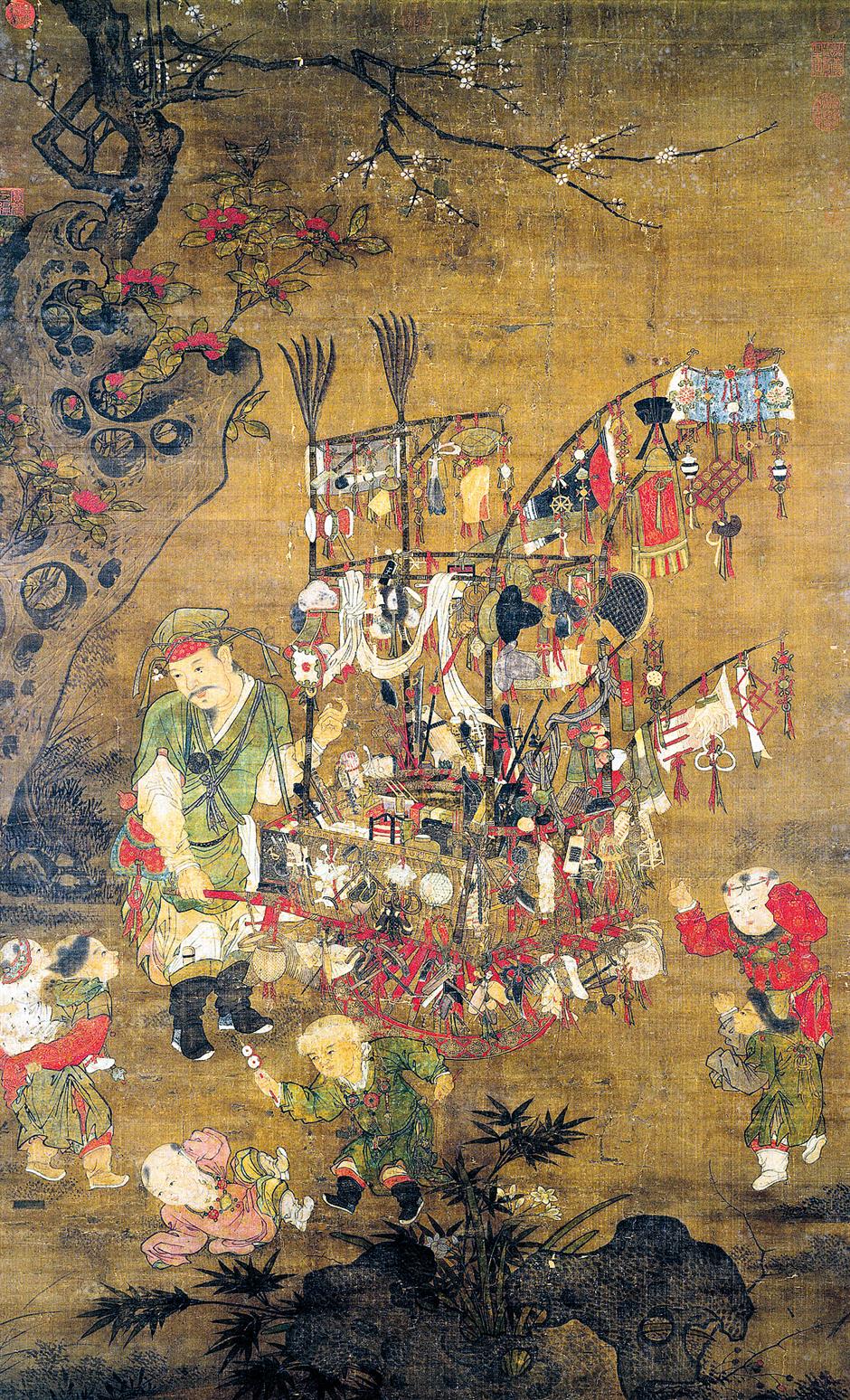 Images of playful children represented a special genre in Chinese figure painting known as yingxi tu, or “children at play,” in the Song Dynasty (AD 1127-1297). “The Knickknack Peddler” by Su Hanchen was one of the images which started the fad. The details of the children’s apparel and the wares on the cart show the spirit of gewu, “studying the phenomena of nature,” seen among painters in Song Dynasty.

Images of children first appeared in Chinese arts and crafts more than 2,000 years ago. But it was not until the Tang Dynasty (AD 618-907) that they began to form a special genre in Chinese figure painting, known as yingxi tu or “children at play.”

At first, the children at play painting was still used mainly to decorate ceramic wares and other crafts. But in the Song Dynasty (AD 960-1279), it developed into a charming and important category of traditional Chinese painting and a favorite theme of imperial court painters.

Su Hanchen (AD 1094-1172) was one of those Song court painters, who has long been praised by scholars and art critics as the very best “children at play” artists in China’s art history.

Little is known today about Su’s early life except that he was born in Kaifeng in central China’s Henan Province. Later, he was hired as a painter in the imperial academy of the Northern Song Dynasty (AD 960-1127) and named a “Painter-in-Attendance” by Emperor Huizong (AD 1082-1135).

After the Northern Song collapsed following the invasion of the Jurchen, Su moved with the imperial court from the old capital Bianjing (now Kaifeng in Henan Province) to Hangzhou in east China’s Zhejiang Province to continue serving in the imperial academy of the Southern Song Dynasty (AD 1127-1297).

In the Song imperial academy, Su specialized in painting Buddhist and Taoist figures. But today, many of his extant paintings are works portraying children at play.

Su was extremely good at using deft brush work and delicate colors to delineate every detail in his artworks. As a result, his paintings “have an immediate appeal that has made them popular everywhere,” said James Cahill (AD 1926-2014), a renowned American art historian.

Compared with adult subjects, the representation of children is usually considered more difficult in figure painting. But through his sharp observation, Su was able to catch the elusive naiveté of children in his paintings. To achieve this, he usually painted children at play as he knew that was when they would be at ease.

Two of Su’s masterpieces, namely, “Children Playing in an Autumn Garden” and “Children at Play on a Winter Day,” both now housed in the National Palace Museum in Taipei, are usually regarded as the best example of Song paintings themed on children playing in a private garden.

In “Autumn Garden,” Su depicts two children, a girl and a boy, hunched over a stool and playing a game of spinning dates. In “Winter Day,” there are a pair of children playing with a kitten. Both paintings here express a deep sense of peace and harmony.

Some children are also seen playing with animals, chasing butterflies, catching grasshoppers and crickets, and watching birds or goldfish. 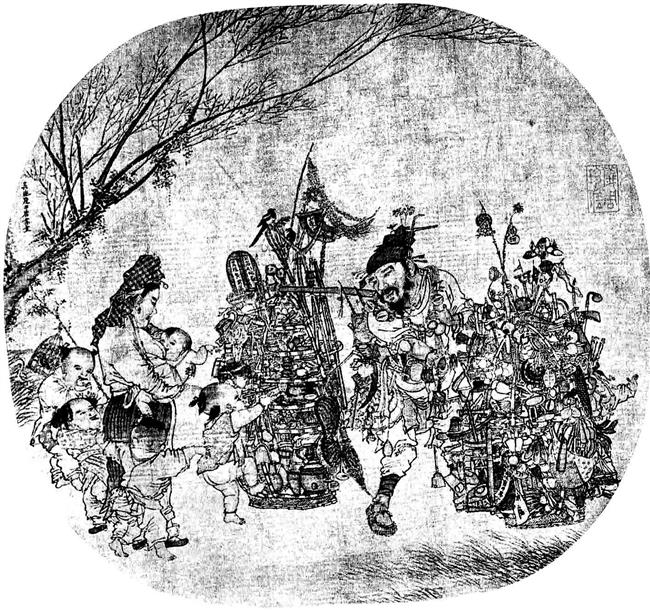 The genre of peddler paintings was later taken up by other master painters, such as Li Song (AD 1166-1243).

However, in comparison with the setting of a private garden, many art lovers as well as art critics believe the so-called “knickknack peddler” painting is a more charming example of the children at play genre. One may imagine that during the olden days, the arrival of a knickknack peddler with all his wares and trinkets was definitely an exciting time for children playing in the street.

Several of Su’s peddler paintings are still in existence today. One of them is a 159.2 x 97cm, ink and color on silk hanging scroll known simply as “The Knicknack Peddlar.”

In the painting a group of children are frolicking in front of a peddler and his cart. Su painstakingly details the content of the cart, which includes a great variety of ornaments, fabric products, containers made of all types of materials, toys and candies. The peddler also installed high bamboo fittings on his cart to better display his wares.

The children and their clothing are equally detailed and carefully rendered. Their beautiful apparel, fine boots and neat appearances indicate that they all come from well-off families.

This genre of figure painting was so popular during Su’s time that it was later taken up by other master painters, such as Li Song (AD 1166-1243) and Wang Zhenpeng, who was active in early 14th century.

In the following centuries, playful children became a favorite motif of Chinese New Year paintings, which are still quite popular in many rural areas around the country today.

“The Knickknack Peddler” is also in the collection of the National Palace Museum in Taipei.