China-US diplomatic relations: a short tour down a long history

It was a tour down memory lane, retracing the highlights of the 40 years since China and the US opened diplomatic relations. Shanghai figured prominently in closer ties.

On Saturday, 50 people from China and the US took a tour entitled “Trans-Pacific Exchange and Cooperation” to sites in the city that helped change the course of history.

First stop: the Jin Jiang Hotel. And then on to the Shanghai Center, the Shanghai Library, Fudan University, the former Astor House Hotel and, finally, the Shanghai Archives on the Bund.

The tour chose the Jin Jiang Hotel as its starting point for good reason. On February 28, 1972, it was in the grand hall of the hotel that China and the US jointly announced the Shanghai Communique, which was considered as an important document in the normalization of relations.

Cowan returned the gesture the next day, giving Zhuang a T-shirt imprinted with the Beatles’ hit title “Let It Be.” He accompanied that with a hug.

The exchange was captured in headlines around the world.

In the same year, China invited the American table tennis team to China for the first time since the founding of the People’s Republic in 1949.

The Shanghai Communique declared that it was in the interest of all nations for the US and China to work toward normalization. It took another seven years to hammer out the details and formally establish diplomatic relations.

After his resignation, Nixon visited the Jin Jiang Hotel twice, in 1982 and 1993.

“I remember when the car stopped in front of the hall, Nixon walked in and immediately recognized it,” said Cheng Ronggen, who was at the hotel to welcome Nixon.

“This is the place,” Cheng said as he walked into the hall.

“He stood here in the hall and told us that this is where the China-US relations started,” said Cheng.

The grand hall was later reconstructed and expanded to 10 times its original size. 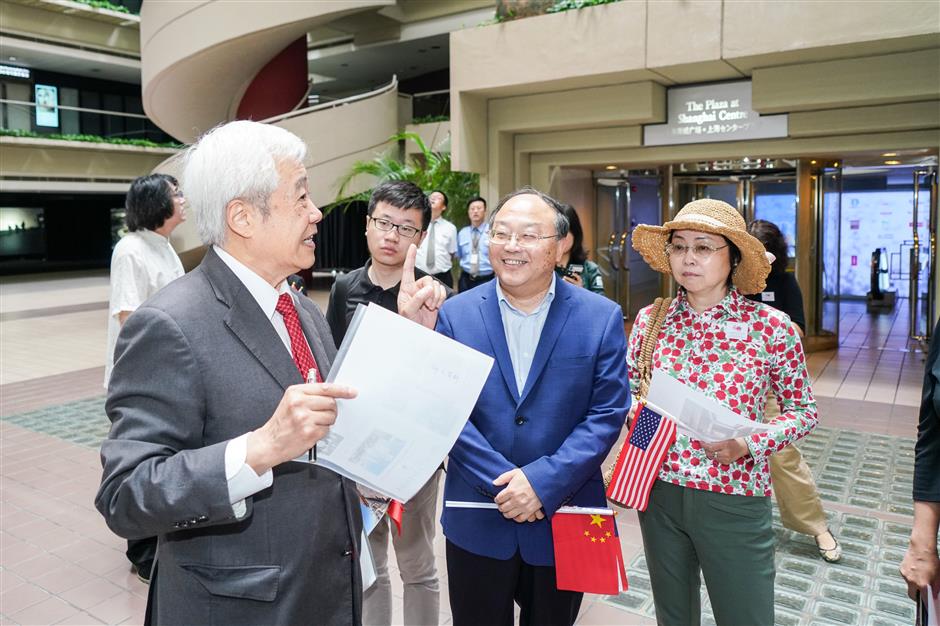 Yu Xi (left), general affairs director of the Shanghai Center, explains the structure of the center’s grand atrium to visitors. 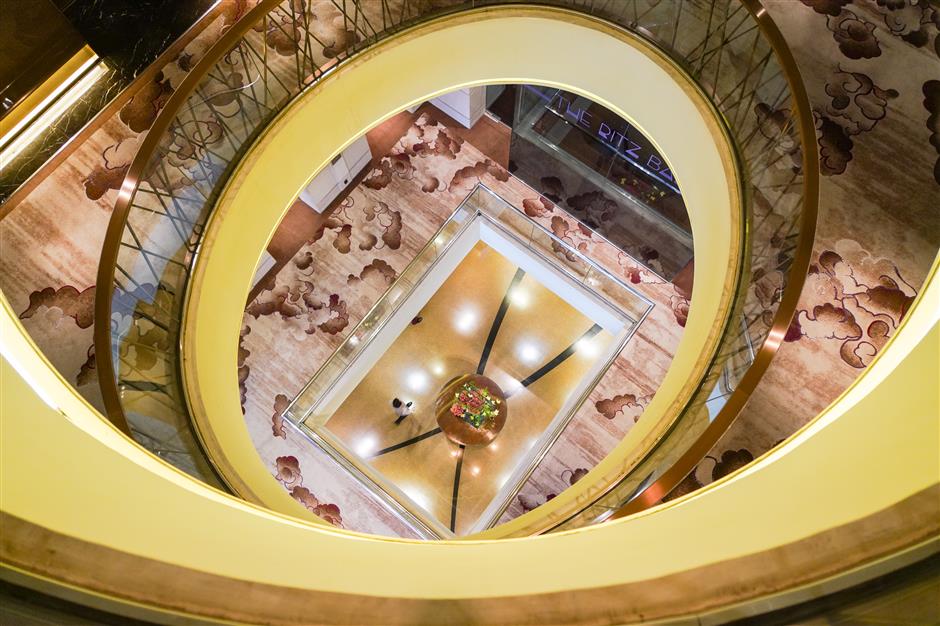 The atrium of the Portman Ritz Carlton Hotel in the Shanghai Center. US architect John Portman designed it as a tribute to the traditional Chinese philosophical concept of an orbicular sky and a rectangular earth, which symbolize the heaven and the earth.

A photo of the iconic Shanghai Center

After a brief opening ceremony in the hall, the tour group moved on to the Shanghai Center on Nanjing Road W.

Shanghai Center was designed by American architect John Portman Jr. Since its completion in 1990, many American politicians and celebrities stayed there. In the early years of the China’s reform and opening-up, it became a window for foreign investment in China.

Shanghai Center was one of the first contemporary skyscrapers in the city and also its first commercial complex, with a hotel, apartments, offices, shops, an exhibition hall and a theater.

There is an interesting backstory about Shanghai Center, according to Yu. When then-Chinese Vice Premier Deng Xiaoping visited the US in 1979, he stayed at the Westin Peachtree Plaza in Atlanta, one of Portman’s signature works. The building so impressed Deng that he later invited Portman to design a similar building complex in China.

Portman died in 2017. The Shanghai office of John Portman & Associates is still located in Shanghai Center.

Tour group members were impressed by this history.

“I have been to Shanghai Center many times, but I never knew the story behind the buildings,” said Phillip Jarrell, a photographer and musician originally from New York, who has lived in Shanghai for more than 10 years. “The city never ceases to surprise me.”

The tour continued on to Shanghai Library, where former US President Bill Clinton and his wife Hillary stopped on a visit to the city in June 1998.

There, Clinton reaffirmed US commitment to the one-China policy and rejection of “Taiwan independence.”

Miao Qifan, former deputy curator, remembers readers and some academics sitting for a talk with the Clintons in the library.

The Clintons didn’t stick to the planned itinerary, lingering for a while in the library’s Internet section. Wang Heming, former Party secretary of the library, recalled how the president seemed impressed by the database the library had accumulated.

In 1998, the library had a collection of some 13 million books. Madeleine Albright, who was accompanying the Clintons as the US secretary of state, clapped her hands in applause when a library official said more than 300 ancient books had been uploaded online and were ready to share with the world.

In the years since that visit, the library has expanded its collection to more than 55 million books, with 130,000 ancient books online.

In 1985, physicist Xie Xide, then president of the university, established the Center for American Studies. It was the first research institute in a Chinese university dedicated exclusively to such study.

The center displays photos of US dignitaries who have visited the university. One of them is of Ronald Reagan, who gave a speech on campus in 1984.

More than 700 students congregated in Xianghui Hall to hear a speech by Reagan.

“I hope that when history looks back upon this new chapter in our relationship, these will be remembered as days when America and China accepted the challenge to strengthen the ties that bind us, to cooperate for greater prosperity among our people, and to strive for a more secure and just peace in the world,” Reagan said in his speech, to the applause of students.

Phelan, who came to visit Shanghai as head of a US delegation of Wall Street financiers, became the first foreigner to own shares of a Chinese company.

The first thing Phelan did after receiving the stock certificate was to rush to the only securities exchange office in Shanghai to open an account and finish the transfer procedure. The ceremony took place in the Astor House Hotel near the Bund, the next stop on the tour.

In 1990, the Astor House Hotel became the site of the new Shanghai Stock Exchange. The main banqueting hall of the hotel served as the trading floor. Last December, the hotel officially became the Shanghai Securities Museum.

Now, people can book a visit to the former hotel every Saturday. In the Peacock Hall, the scene of Deng’s presenting the certificate to Phelan is recreated in wax works.

The tour ended at the Shanghai Archives on the Bund, where a photo exhibition commemorating the 40th anniversary of the establishment of the China-US diplomatic relations is being held. The “Trans-Pacific Exchange and Cooperation” exhibition showcases 350 pictures in five sections that encapsulate the highlights of bilateral relations in Shanghai.

Participants in the tour said they were grateful to learn the backstories of these historical sites and get a more intimate look at how bilateral relations developed and flourished. 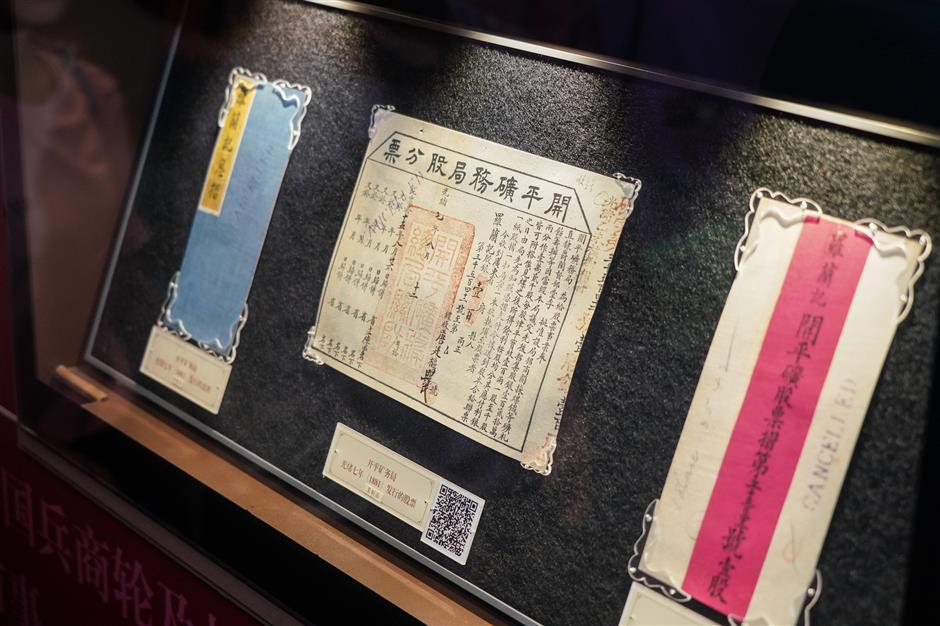 One of the first stock certificates in China, part of the Shanghai Securities Museum collection 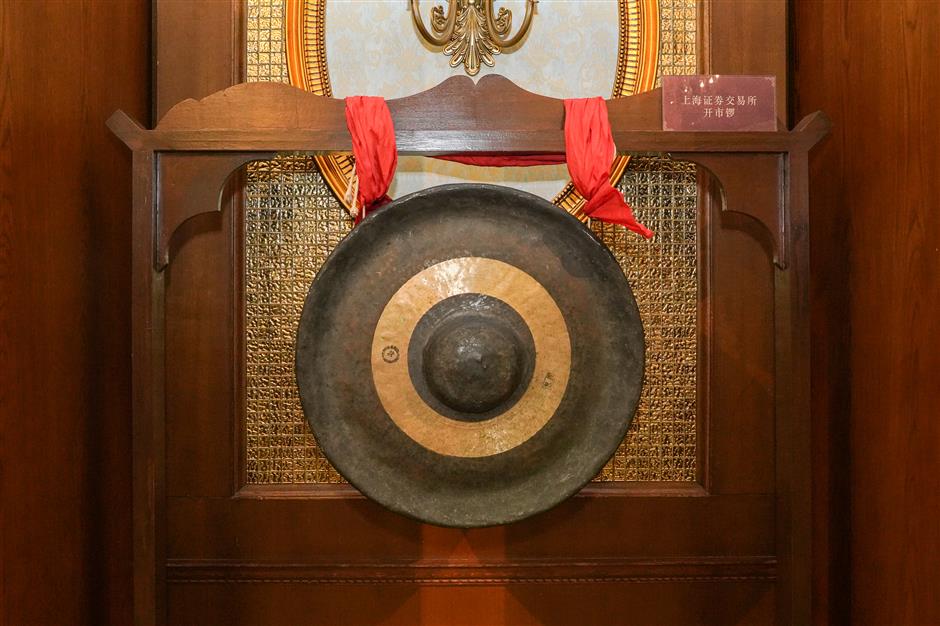