People linger over gemstones in jewelry boutiques, but few have ever seen unprocessed gems.

Now, here is your chance to see gemstones and precious metals in their raw form in Hangzhou.

An ongoing minerals exhibition at the Zhejiang Nature Museum displays more than 400 unprocessed gems and precious metals through October 7.

The exhibition also showcases their mining history, properties, production areas and other details.

One of the highlights comes from the longest piece of gold ever discovered. This 52-centimeter-long pure gold nugget was unearthed in Australia, and purchased by a Chinese collector.

Gold has been the most cherished metal in human civilization since it came into use in ancient Egypt and Mesopotamia 6,000 years ago.

In modern days, it is often made into an alloy with nickel, zinc and platinum to enhance hardness, since pure gold is too soft for most uses.

Except for gold, visitors can see natural silver and copper. They were hidden underground for millions of years before being discovered.

The world’s largest single crystal peridot is also on display. The Egyptians called it the “gem of the sun.” Today this gem is still prized for its restful yellowish green hues and long history.

Another attractive rock is an emerald from Zambia. It was the highlight of Mineralientage München in 2015. As the largest mineral show in Europe, the event lures many industry experts and professionals every year. This emerald was rarely shown in public after that event.

Measuring 24 centimeters in length and 13 centimeters in width, this rock contains dozens of cylinder-shape emeralds embedded in black stone. The verdant green color shimmers against the dark backdrop.

Color is by far one of the most important criteria in grading emerald. Gem experts differ on the degree of green that makes one stone an emerald and another stone a less-expensive green beryl. 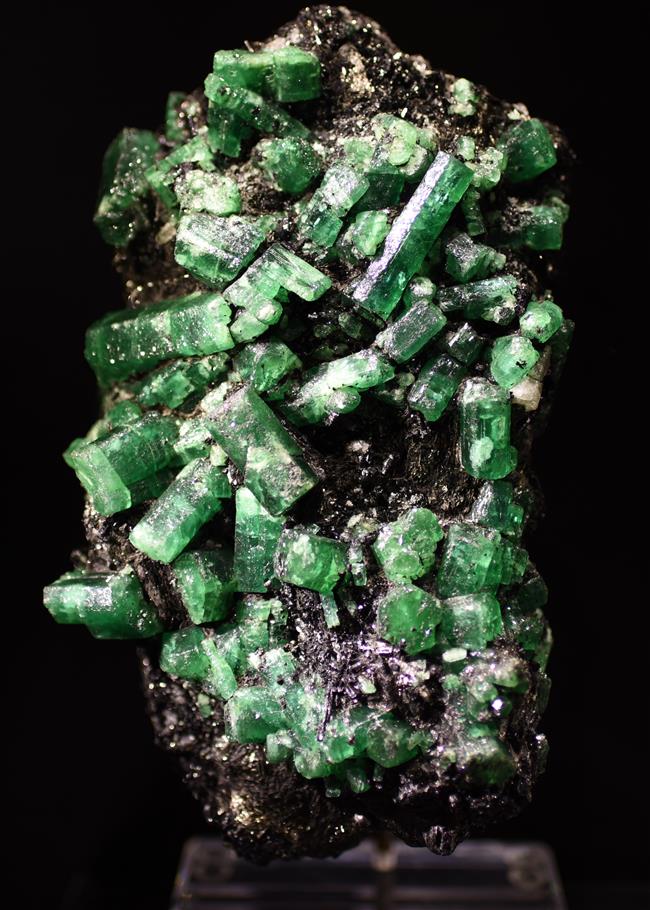 An emerald from Zambia 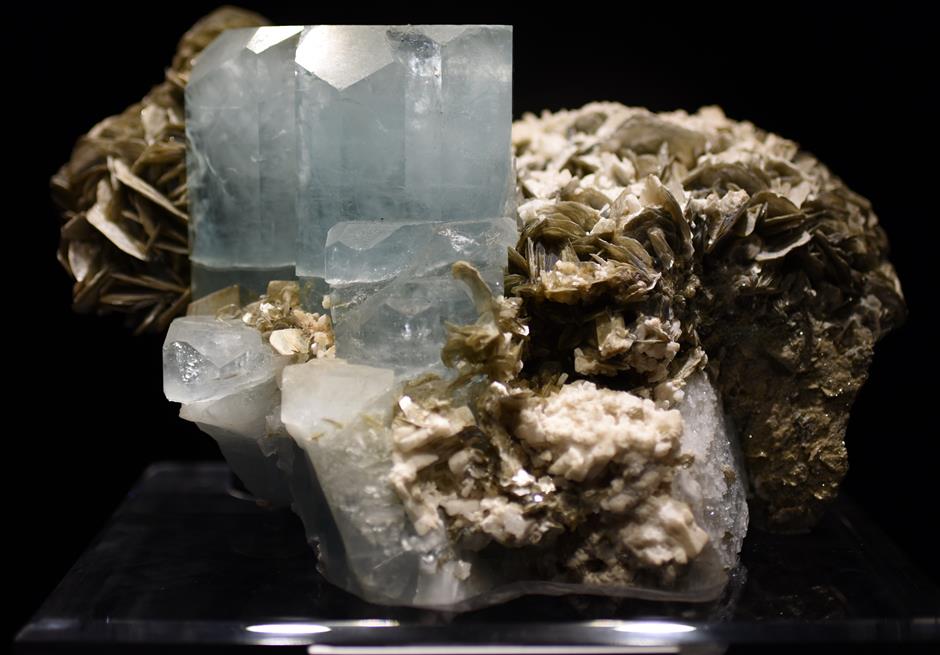 A piece of aquamarine

Most gemologists call a stone green beryl when its color is “too light” to be classified as emerald.

That criterion is also applied in grading tourmaline. In the exhibition, tourmalines attract endless streams of visitors because of their vibrant colors including green, yellow and pink.

A tourmaline’s value depends on its transparency and flowing color transition.

The ones in the exhibition epitomize the best quality.

“Such unprocessed minerals are more valued for collecting, rather than simply being made into jewelry,” said Li Xiudi, the curator of this exhibition.

The magic of chemical reaction endowed tourmalines with glamorous colors. In the exhibition, a set of exhibits look like sliced watermelon — green outside, a rosy core and a white strip in between. They are rare and special.

Film aficionados may be interested in the blue tanzanite on display.

A tanzanite gemstone starred in the blockbuster movie “Titanic” in 1997. The beautiful heart-shaped blue pendant necklace that Kate Winslet wore while playing the character Rose was named the “Heart of the Ocean.”

In fact it is a tanzanite stone surrounded by diamonds.

Naturally formed tanzanite is extremely rare and is native only to Tanzania. It is rich blue tinged with purple hues and is one of the most rare and coveted gemstones in the gem industry.

Tanzanite appears sapphire blue and violet depending on the crystal orientation.

Another variety of blue gemstone is aquamarine. Its name comes from the Latin for seawater. In European myth, an aquamarine engraved with Poseidon — God of the sea — could calm waves and keep sailors safe at sea.

The exhibition showcases a series of aquamarines with different degrees of blue. The best gems combine high clarity with limpid transparency and slightly greenish blue hues

Top quality aquamarine shouldn’t have any visible inclusions. Milky aquamarine is much less expensive, although it is beautiful in its own way. 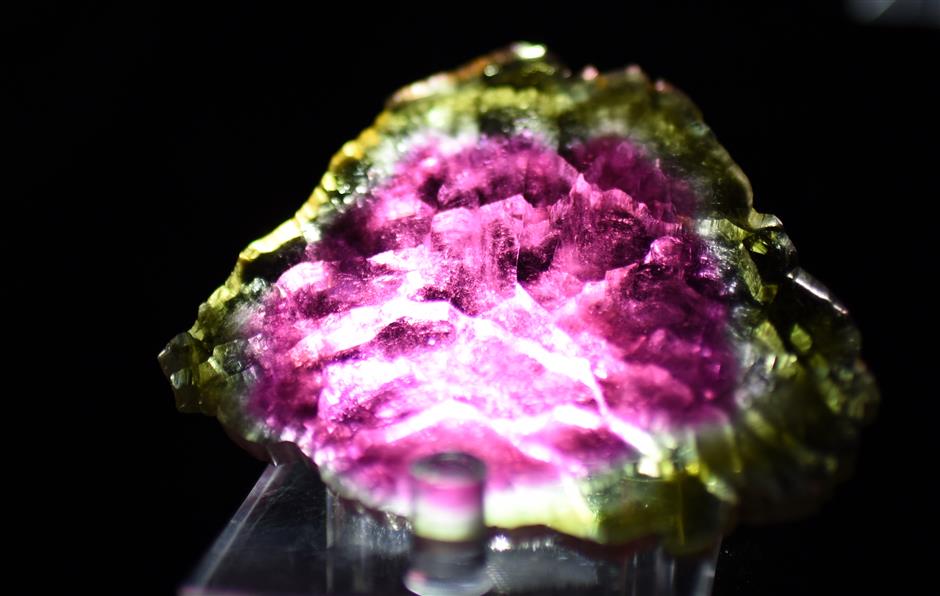 A piece of tourmaline 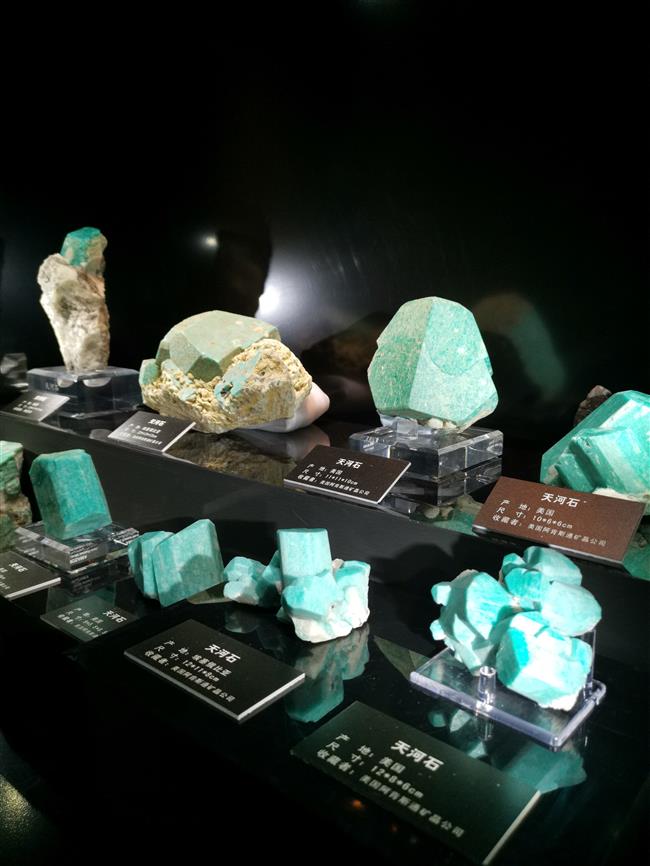 More than 400 unprocessed gems and precious metals are on display at the Zhejiang Nature Museum through October 7, including various kinds of amazonite from around the world. 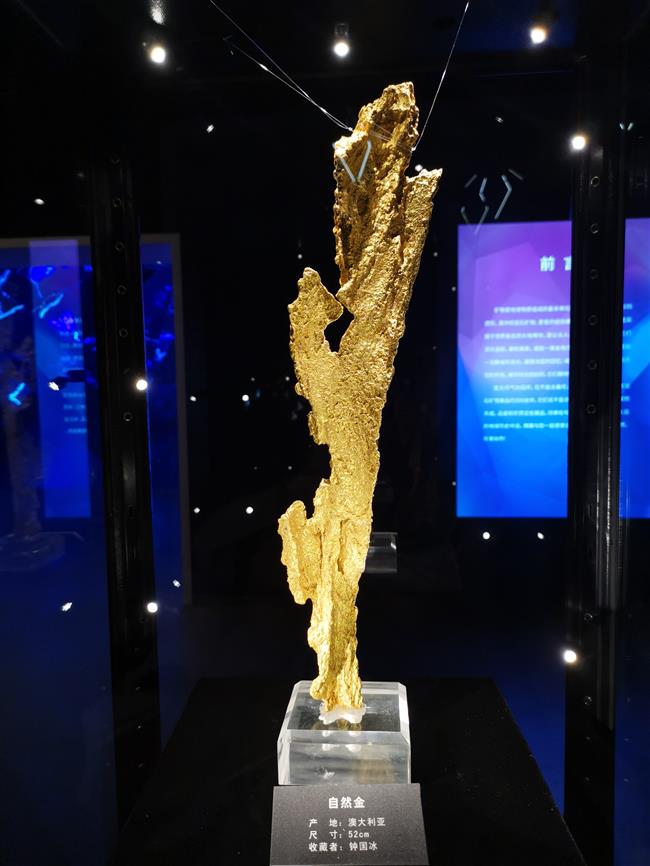 The longest piece of gold ever discovered