Painting beyond the limit of words

A good painter of “freehand” traditional Chinese art has to have talent, generosity, tolerance, perseverance, rich life experience, the right methods and the ability to withstand loneliness.

The long list of requirements has caused many a learner to flinch. Freehand, or xieyi (writing ideas), is a form of painting that includes poetry, calligraphy and seals.

However, for Jiading-born painter Fan Changjiang, the long and lonely journey of freehand painting is like shooting an arrow — there is no rewind after drawing the bow.

Fan was born in an old three-story building near Xiangjing Bridge on Ximen old street in 1953. Among his childhood hobbies were reading, writing, chanting poetry and painting. But given the material scarcity of his time, he couldn’t find any resources to cultivate his painting.

As an educated urban youth, he was sent to live and work in the countryside as part of national policy between the 1950s and 1970s.

Fan was recruited as a medical student at the affiliated school of Shanghai General Hospital. After graduation, he became a pharmacist at the hospital. But painting remained a hobby in all his spare time.

In the spring of 1974 , Fan got close with Qian Juntao, a Shanghai-style painting master, who became his teacher.

“He was always calm and hospitable,” recalled Fan, whose determination and passion to learn painting moved Qian, who immediately took him as his disciple.

“A nationwide anti-traditional Chinese painting movement was in vogue. Nobody wanted to learn painting and nobody dared to do so. I had to learn from Mr Qian in secret.”

To have more time practicing painting, Fan made a plea to work the night shift in the hospital so that he could spend the afternoons painting. This inverted circadian rhythm of his still remains.

Fan quit his job as a pharmacist in 1988 and focused on painting.

“My father was against this decision at first. But gradually he changed his attitude as he saw how popular my paintings were and my ability to live as an artist,” said Fan.

Traditional Chinese painting declined after the Yuan Dynasty (1206-1368) but a revival represented by freehand paintings by artists Xu Wei (1521-1593) and Chen Chun (1483-1544) broke the conservatism of the old style and replaced it with passion and boldness.

Great artists such as Wu Changshuo and Qi Baishi were deeply influenced by this. So was the Shanghai-style that best represents modern Chinese painting.

Fan, too, chose to be a follower of this new style of freehand painting.

“My teacher told me, ‘A painter paints what words fail to describe.’ And freehand painting is the best way to express the limit of words.

“Even the vicissitudes of life and the injustice of the world can be expressed in a painting,” said Fan.

Fan is very creative and his style is grand and powerful. He paints calabash, grapes, pumpkins, lotus and plantains with boldness and sophistication. Having learned painting shrimps from the works of master Qi Baishi, he paints the arthropod with vividness and a touch of life.

Well-read since childhood, Fan would decorate his paintings with well-versed calligraphy. He would sum up a crab painting with sentences like “White moon, tender wind, silent night, the rustling sound of a crab moving.”

To better illustrate his painting world, Fan went on to learn cursive writing from Tian Huan, a great calligrapher and painter as well as the assistant and secretary of Sun Yat-sen. The apprenticeship lasted six years.

Besides freehand painting, Fan also does oil painting. His oil painting style is closer to secessionism and impressionism. As far back as the earlier 1980s, Fan used the acrylic paints and experienced various painting ways in materials such as rice paper, cotton cloth and leathers.

He visited Hong Kong for the first time in 1986 and the various-style modern art works there broadened his horizon.

When he returned to Shanghai, he used even more zest to create a batch of unique-style acrylic paintings. An American art critic and gallery manager, during his visit to Shanghai in the earlier 1990s, felt attracted to Fan’s works and supported him to hold five exhibitions in Hong Kong in succession. All of the more than 230 pieces of works exhibited were bought by collectors.

While still mourning her, Fan is determined to run the institute well, to both promote the lady’s great personality and the aesthetic beauty of traditional Chinese painting. 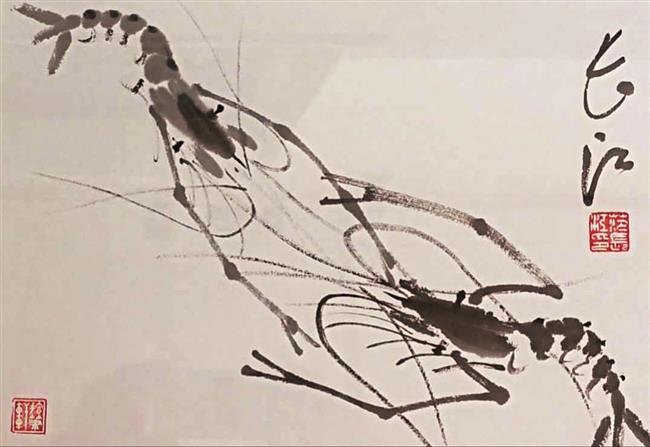 Shrimp is one of the favorite subjects of Fan’s paintings.