US architect's towering achievements in Shanghai 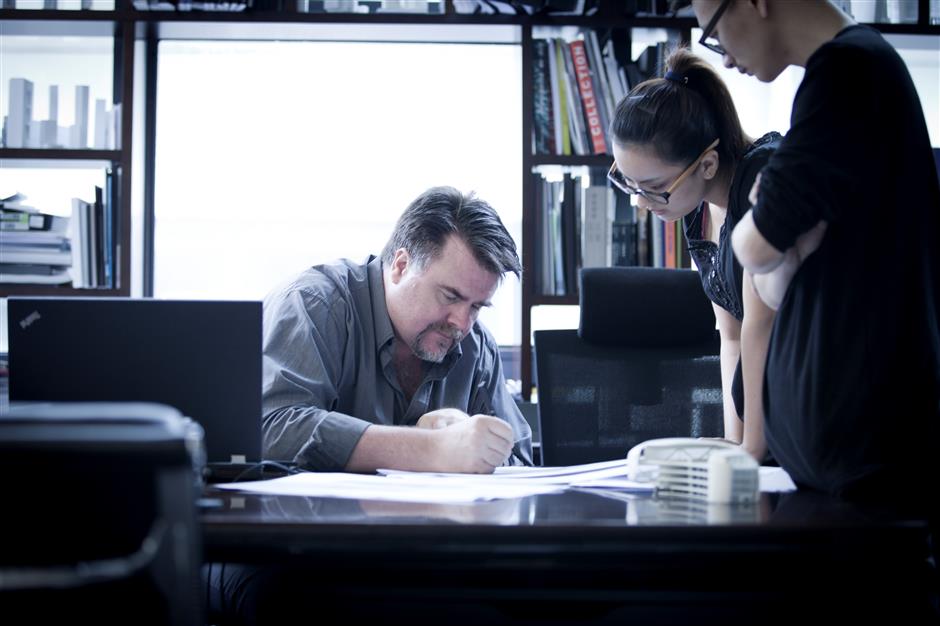 Marshall Strabala, chief architect of the Shanghai Tower, is at work in his office.

Lujiazui financial district in the Pudong New Area is a forest of skyscrapers with the Jin Mao Tower, Shanghai World Financial Center and Shanghai Tower, three of the “superlative trees” that make up the city's skyline.

All three landmarks were designed by American architects.

Marshall Strabala, chief architect of the Shanghai Tower, said: “The story is about past, present and future. Jin Mao Tower, finished in 1998, is like a stainless-steel pagoda, which sort of represents the past. WFC is a building of the present, which is opening up to foreign investment. Shanghai Zhongxin (Tower) is about China's future – a future that's more open."

At 632 meters, the Shanghai Tower is China’s tallest building and the world’s second-tallest. The high-rise has 127 floors above the ground and five below ground level. With a Leadership in Energy and Environmental Design (LEED) certification, it is a truly green building.

Strabala shared a secret with Shanghai Daily that visitors can go to the sky lobbies on the 22nd and 52nd floors to enjoy the view without payment.

“It is what makes Shanghai Tower unique. It has spaces for people to come and enjoy life without having to spend a lot of money. And this is the sort of a secret that people should know.”

The man behind the mega structure, Strabala first visited Shanghai 18 years ago. His Chinese name is the poetic Sima Su.

The interview took place at Strabala’s office in the tower. With such a splendid view of the city, he started off by chatting about Shanghai.

A: In 2001, I visited the city for the first time. Flying from Beijing, I was meeting the Jin Mao group in the Jin Mao Tower. I got a taxi while I realized that I didn’t have its Chinese address. I said “Jin Mao” to the driver and he shrugged his shoulders. Finally, what I did was I drew a picture of Jin Mao Tower and showed it to the driver. And he said, "Oh, Jin Mao!"

Now I can speak enough Chinese where I can get to the airport, train station and home. Therefore, the first impression made me learn enough Chinese to get around.

One of the greatest things about working in Shanghai Zhongxin is that you can get here just by saying those four words. That is the value of the building. You don't have to give someone an address.

(Strabala showed the first few Chinese characters he learned to write — nu or woman, zi or child and Shanghai Tower.) 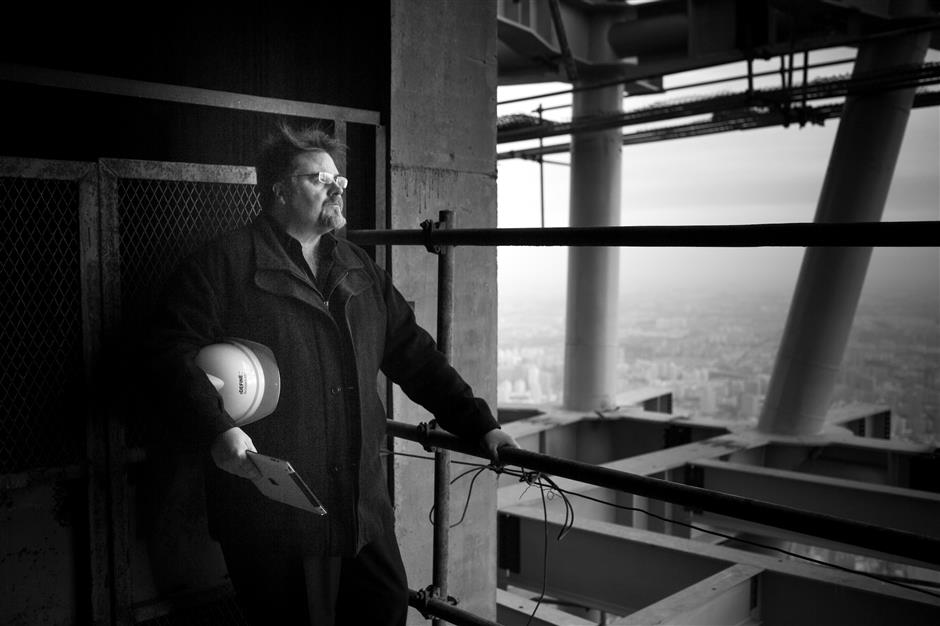 Marshall Stabala at the construction site of the Shanghai Tower

Q: You have been to many metropolises. What is the most significant characteristic of Shanghai?

A: Shanghai is very walkable of all the Chinese cities I’ve been to and that’s what I love about the city. Someone asked me if you could live anywhere else in China, where would you live in? I said Shanghai simply because it's a walkable city.

Q: Do you echo Chinese culture through your design language?

A: Design is kind of an odd thing because we're not designing for ourselves. As architects, we are actually designing for someone else.

As a foreigner living in China. I think you could only have a superficial knowledge of Chinese culture. I've tried to read a lot about Chinese culture. I think I know more than most foreigners, but in my opinion, to be truly Chinese, you have to be Chinese.

What I do is looking toward the future and trying to design a future in China that will become a Chinese building. I think Shanghai Zhongxin is a Chinese building because it's built in China and has become an icon in Shanghai. Maybe in a hundred years, people will look back at this and say “you know, the Shanghai Tower, that's one of those old-style modern green buildings.”

Q: Why did you choose architecture as your career?

A: Actually, it’s architecture that chose me. I started by doing simple drawings for my father, an intellectual property attorney. When I was in college, my undergraduate degree was in fine arts and design.

My girlfriend at that time wanted to be an architect, so we both applied to graduate school at Harvard University. I got into graduate school while she didn't, which ended the relationship. I found it was something I really enjoy doing. I love to do architecture.

The three “superlative trees” in Lujiazui that make up Shanghai's skyline 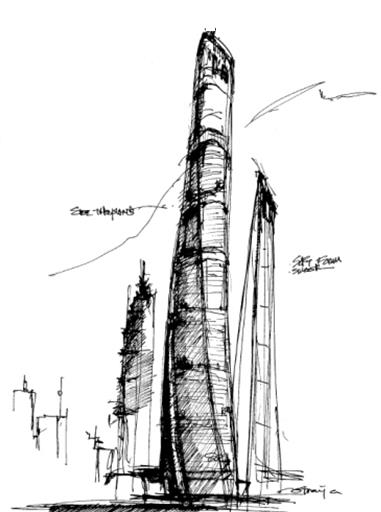 A sketch of the three landmark Shanghai buildings, representing past, present and future in Strabala's view.

Q: What is your design philosophy? How did you apply it to the Shanghai Tower?

A: My design philosophy is “do more with less.” Shanghai Zhongxin has two skins. It allows us to reuse air. The double-skin system helps us save money in energy costs over a long time. The shape of the outside of the building is what reduces structural loads on the building and creates the beautiful spiraling curve.

So not only does it look beautiful, but it also functions well and saves money. That's what we mean by doing more with less.

Q: Shanghai Tower looks like a huge and twisted bamboo with eight joints and nine separate sections. In previous interviews, you called the building a “vertical city” with nine neighborhoods. Could you tell me more about this?

A: Eight is a lucky number. Nine is not a bad number. The safety code in China has to have an area of refuge every 15 floors. Therefore, the building is divided into nine zones. The zones get taller as the building gets thinner so we could keep a similar population in each cell.

Featuring parking, retail, a conference center, office areas, two hotels and a sightseeing area, the building functions pretty much like a vertical city.

We split the elevators into what we call sky lobbies, which function like subway stops. The lobbies have retail around them, such as a bookstore, restaurants, two dental offices, a gymnasium and a museum.

When I was designing the building, I calculated that if 5 percent of the office people don't go to the ground floor for lunch but just go to the amenity floor, that will save a million elevator trips a year, which adds up to a lot of energy.

Q: Sustainability is one of the design highlights of Shanghai Tower. Could you elaborate?

A: The concept of the design is that of a thermos bottle. There's an outer glass skin in a glass sphere. The design contribute to keeping the cold air from migrating out in the summer and then it reverses in the winter. It's like being able to put a jacket on or take a jacket off depending on the weather.

The use of double skin preserves energy. Over 50 years of energy savings will pay for all the double skin.

Q: How do you see the trend of building skyscrapers?

A: The tallest building for the longest time was the Great Pyramid of Giza, which is about 145 meters high. Most 30-story residential buildings in Shanghai are almost the same height.

To play the game that I'm taller than you is kind of a waste of time because eventually you're going to lose. I always use the example of putting mousse in hair to describe making a spire taller. Am I taller if I put mousse in my hair and make it stand up?

I would suggest be the best you can be and be the right size for the city. Be appropriate. Don't play that game. 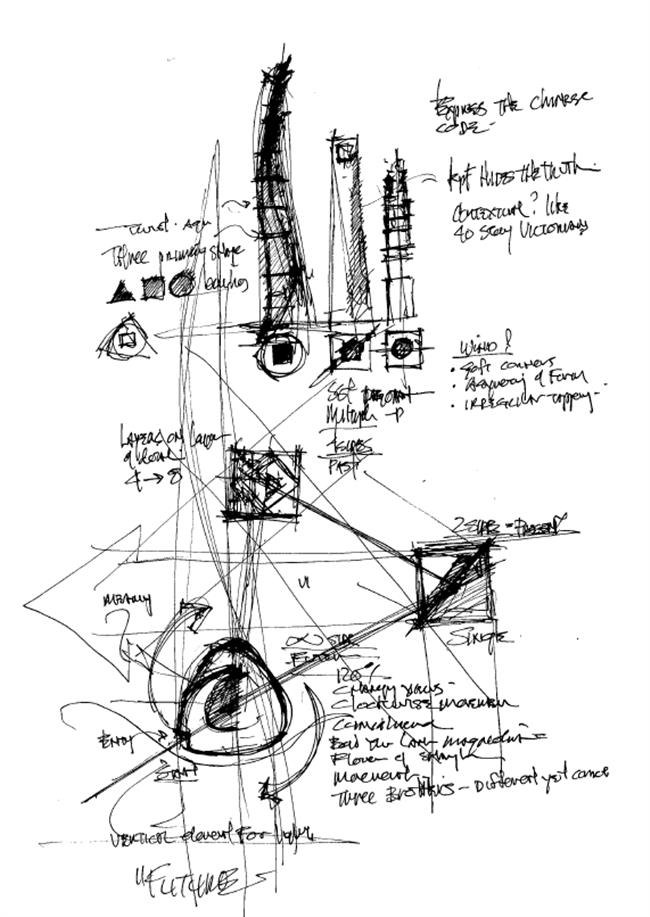 A preliminary sketch of the Shanghai Tower 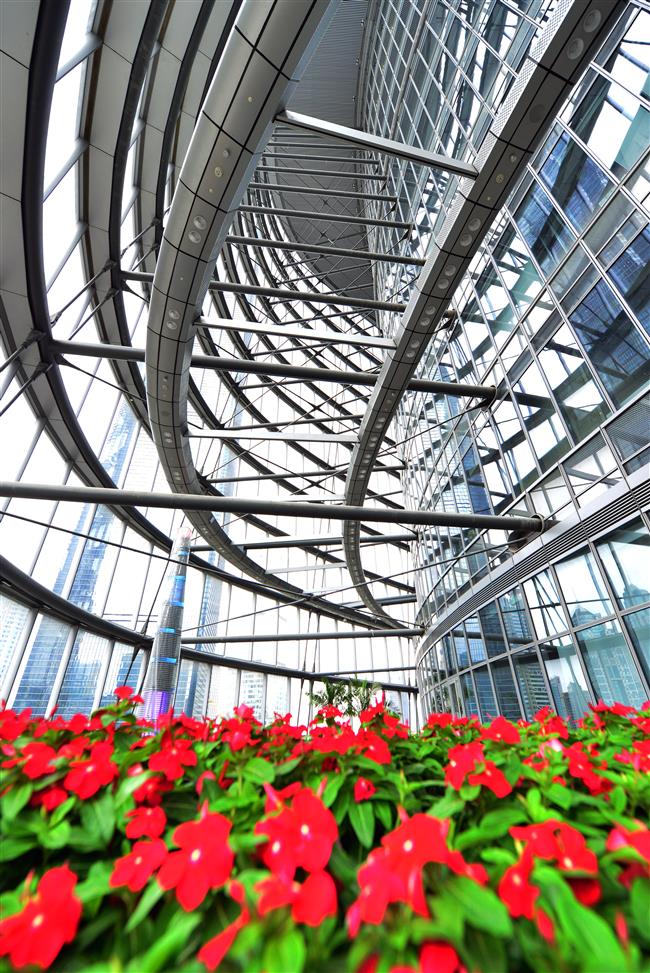 A: Architecture is a “practice,” meaning you must continually “practice” the art in order to get better. My first trip to the Chinese mainland was around 1999. I have seen leaps and bounds in the practice of architecture over the past 26 years, in both quality of construction and sophistication of design.

One of the first jobs I did in China was the Suzhou Convention Center, and we used a very prominent Chinese contractor. The exterior wall took 4-5 attempts to get right, but today that same contractor did the outer skin of the Shanghai Tower with an unmatched degree of precision. The design is also improving, each generation of architects bring new life and vitality to the world.

The world is smaller now and we can all learn and improve with interaction of ideas and cooperation. The practice of architecture is unstoppable in China.

Q: Many Chinese students study architecture in the US. What is the greatest difference between architectural education in America and China?

A: The curriculums in Chinese and American architecture schools are very similar. For example, drawing classes, computer skills, history, theory and studio design. The biggest difference in learning is where you learn. In architecture it is always about a project, which is often in a new city. Living and working in different cities helped me understand that architecture is a language based on program, climate and location: not just form.

Over the past 30 years, I have seen that the real education of an architect only starts after school, when he or she begins the “practice of architecture” under a mentor. School is just a stepping stone to learn some of the tools and skills you will need later in your professional life, and more importantly expunge some of the bad designs we all have in our heads.

Q: As a senior architect, what advice do you have for young architects?

A: The best advice I can give is be inquisitive. Look at things. You live in one of the greatest cities in the world, and there's architecture all around you. Look at it, learn from it and see what that building is. Look at the color of glass, the color of the volumes, the ceilings, the floors, the materials, and see how people put them together.

There was a German philosopher named Johann Wolfgang von Goethe who said “architecture is frozen music.” I used to think that's one of those fancy things which sound smarter than they actually are. But now I really understand what was meant by that phrase because a good building is really a symphony of color, shapes and textures.

I recommend every architectural student to go as many different cites as possible, not just for a visit, but to live and work. Learn all you can before you settle down in the city that you love best. I have been lucky to work all over the world, but I think this would not have happened if I stayed home and went to architecture school in San Francisco.

I still observe and learn from each and every new city. Today I live between Chicago and Shanghai, two of the world’s greatest cities.