Ballet at the frontier of new stage creativity 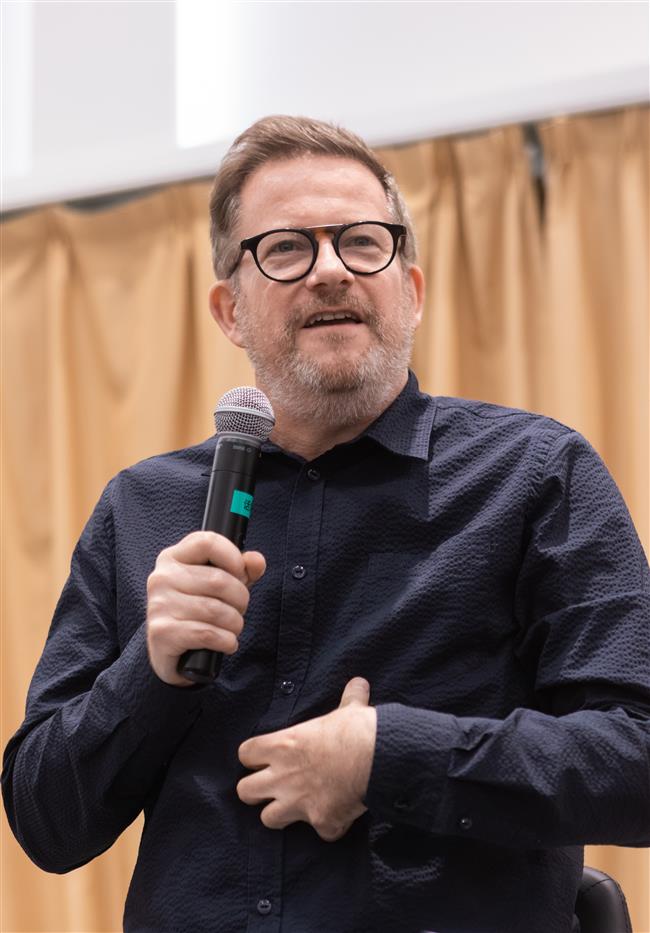 British choreographer Matthew Bourne might be called a “black swan” of ballet, but that’s where his creative talent leads him. His iconic production of “Swan Lake” returns to Shanghai next month, after wowing Shanghai audiences in 2014.

The performances five years ago still linger in the minds of many who saw it. Bare-chested, barefoot male dancers played swans on stage instead of traditional ballerinas in tutus.

“I got the inspiration while watching swans on lakes, which might sound obvious,” he told Shanghai Daily. “The male swans can be strong and aggressive, and to have a lead male swan in the ballet would wipe away people’s old impressions of ‘Swan Lake.’”

At the time he was creating the ballet, royal scandals involving Princess Diana, Prince Charles and his then-mistress Camilla filled British tabloids.

“Reading the newspapers, you felt that a prince was probably not living the life he wanted or being the kind of person he wanted to be,” Bourne said. “It seemed to be a topical story, and it inspired my story.”

The work, which retains the classic music of Tchaikovsky, shocked many theatergoers when it premiered in London in 1995. Still, it won Bourne a Tony Award for choreography and an Olivier Award for best new dance production.

In 2016, he was knighted and awarded the Queen Elizabeth II Coronation Award in recognition of his services to the art of ballet.

Bourne, 59, has created many unique interpretations of classic ballet, movies and books. His aim is to attract a wider audience to theaters.

He started training as a dancer at age 22, studying at what is now the Conservatoire of Music and Dance. He danced professionally for 14 years, giving his final performance in 1999 and turning his full attention to choreography. 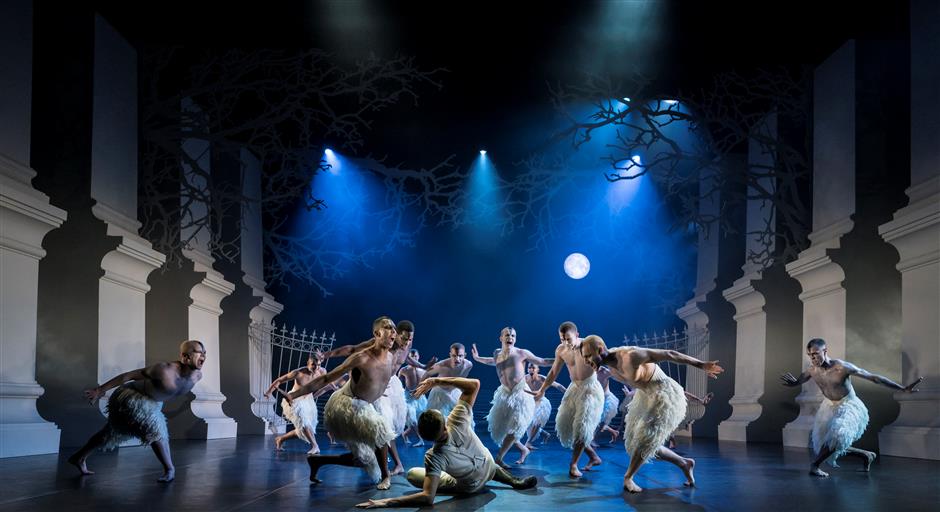 Shanghai audiences next month will see an updated version of the 2014 performances, with improvements in stagecraft, costumes, sets, lighting and the use of projection.

Shanghai audiences will see a somewhat revised version of the 2014 show, with improvements in stagecraft, costumes, sets, lighting and the use of projection.

“The small changes have raised the level of ‘Swan Lake,’ a work created over 20 years ago, to where other recent productions of my company have been,” Bourne explained.

He said he has been gratified to hear of so many young ballet dancers inspired by the flamboyant lead swan in his “Swan Lake.”

“For everyone in the show at the moment, it’s their dream to be there,” he said. “They grew up wanting to be in this show. Quite a lot of them were not alive when I created the work, and they look at me as an historical figure.”

The August show in Shanghai will star Dominic North as the prince and Will Bozier as the lead swan and “the stranger.” North is the most senior dancer in Bourne’s company, while the younger Bozier is replacing Richard Winsor in the role of lead swan.

“The lead swan and the stranger have very different personalities, but were danced by one person,” Bourne explained. “A dancer has to be versatile to do that. He (Bozier) kept saying he wanted to play this part, which had been his childhood dream. I was not really convinced at first, but he proved me wrong. He is a goofy kind of guy in life but very intense and powerful on stage. He worked and fought for it, and nailed it. It was good to give the part to someone who believed he could do it and proved himself right.” 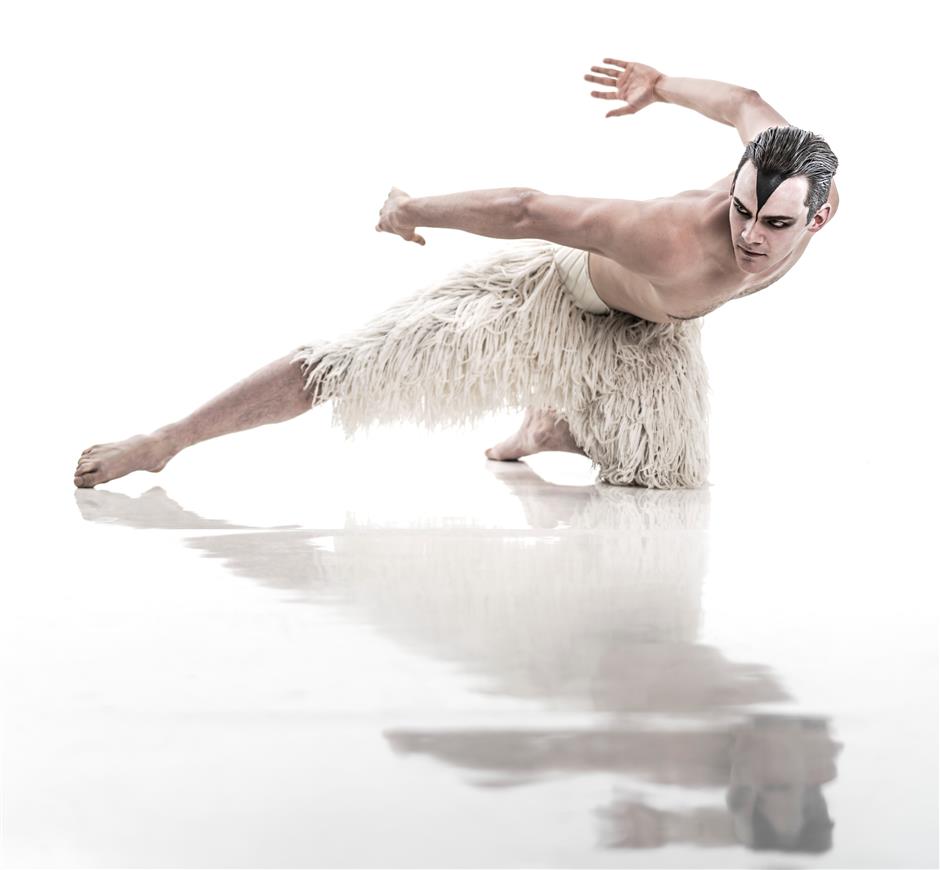 Will Bozier casts an intense, powerful presence on stage.

Bourne said he encourages his dancers to throw in their own ideas during the choreography process.

“The dancers in my company are much better dancers than I used to be,” he said. “In the early stage of my choreography, when I was still a dancer, I used to study the movements in front of a mirror and teach the fellow dancers. But as soon as I stopped dancing, I would throw out ideas to the dancers and watch them use their talent to do particular moves, especially in solo and pas de deux. We discuss and collaborate. In the end, it becomes a bit difficult to know who did what because we all work together.”

The popularity of “Swan Lake” encouraged Bourne to bravely explore. His “Cinderella” was set in London during World War II. His “Sleeping Beauty” is a Gothic romance in which Aurora is not awoken by a random prince but by a hunter who later turns into a vampire.

Most of his famous works are based on classics or well-known films and books, including “Romeo and Juliet,” “My Fair Lady,” “Lord of the Flies,” and “Edward Scissorhands.”

“It’s obvious that a piece called ‘Swan Lake’ or ‘Sleeping Beauty’ will sell much better than a piece with a made-up title,” said Bourne. “There are some considerations made with titles. But if you can take a famous title and make your own story with it, that’s where the fun lies.”

He added: “I kind of regard my pieces as original pieces. We create new stories and new characters. You have to admit there are not so many original stories around. Everything is based on something else.”

Bourne said the first step in his creative process is to find a “big idea” that can differentiate his work from traditional versions. In “Swan Lake,” the male swan is the “big idea,” while in “Sleeping Beauty,” it’s the vampire.

“After having the ‘big idea’ settled, I try to make a logical story out of it,” he explained. “In ‘Swan Lake,’ it’s obvious that the relationship between a prince and a male swan will be different and psychologically more interesting. It became more about the voices in the prince’s head, who was attracted to the swan and wanted to be wild, beautiful and free like him.”

He added: “I try to make my stories appealing to two sets of people: people who really love the original piece and people who know nothing about the original work or never have seen a dance piece before. In my work, I have things for people who are well informed, as well as young audiences who lack theater experience.”

Dissent and even criticism are inevitable when a choreographer approaches a classic work in an untraditional way.

“You are walking a very fine line when you take on something traditional or much loved,” Bourne said. “I want to try and please people when dealing with their beloved pieces by being reverential about the music. Your ideas have to come from the music. The score is my script and the structure of the story. And you show your respect by knowing and understanding the original work well.”

He added: “I’m not out to shock anyone, but I love surprising people. I don’t want to put anyone off. I just want people to come with me. I’m an audience person.”

Bourne said he has read varied criticisms of his “Swan Lake.”

“Some say it’s not technically as skilled as what we are used to,” he said. “Those people are usually from a very classical ballet background, who would like to see certain turnings and dance tricks, which are not necessarily helpful in my storytelling. Some people complain that the plot is too complicated. I think it’s just because they had preconceived notions and didn’t see what they expected to see in the theater.”

“He was probably bored with the piece after doing it for so many times,” Bourne said. “After watching my version, he said I made him fall in love with ‘Swan Lake’ all over again.”

Bourne has no desire to keep a theatrical distance from his audience. In fact, he said he enjoys sitting in an audience to observe their reactions during a performance.

“I want to feel the audiences and see how well people get my punchlines,” he said. “Audience are very different in different countries and cities. Some audiences get upset about things with which I can’t sympathize, but I try to make my pieces work for as wide an audience as possible, and I even adjust some parts of a show to suit local audiences in a particular city.”

Despite his multiple visits, Bourne said he never stayed in Shanghai or China long enough to really understand the local culture and interact with residents.

“I like walking around and discovering things by myself rather than heading to tourism spots,” he said.

“I would love to live in a place long enough to really get to know it. If I had abundant time, I would love to see some traditional Chinese dances and theater. I don’t know many Chinese myths or folk tales, yet they interest me. I’m open to everything.” 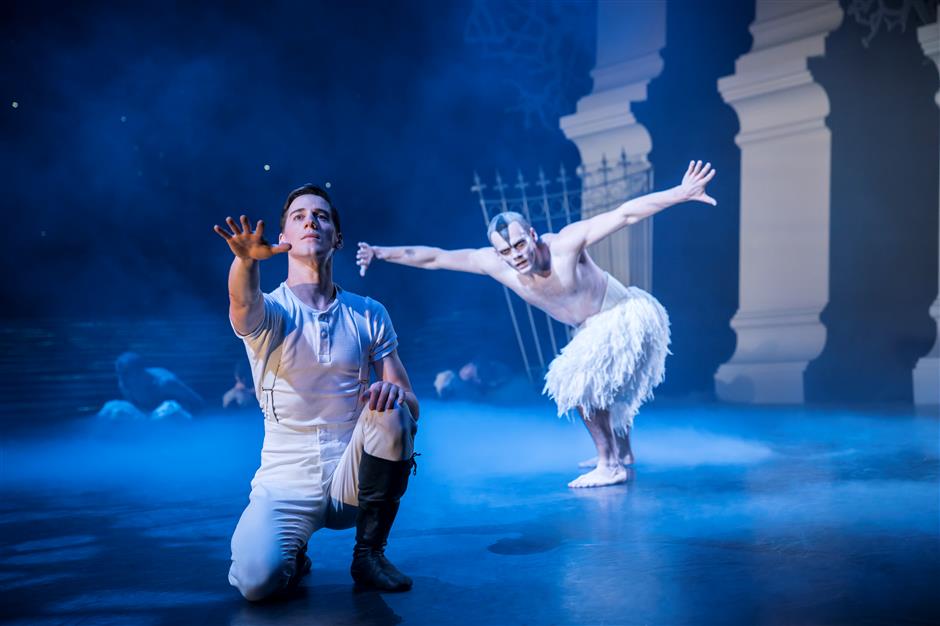 The August show will star Dominic North (left) as the prince.

“Swan Lake” was a watershed creation in Bourne’s career.

“We were running a small dance company, and ‘Swan Lake’ was just a project,” he said.

“It became so unexpectedly successful that it was reported as a news story rather than an art story. It was taken to the West End and then to Broadway. It featured in the film ‘Billy Elliot’ and went international. We started touring as we never toured before outside of Britain. It really did change my life a lot.”

His “Swan Lake” also served as a wake-up call for ballet companies struggling to bring the art form into the new century. In Bourne’s opinion, a modern theater should involve the newest theater techniques and designs rather than remaining a piece of history.

“More ballet companies are having contemporary choreographers working with them, leading to mixed styles,” he said. “It’s a good thing to have new movements and ideas. I think that’s the direction forward.”

Despite the success of “Swan Lake,” Bourne rates his “Sleeping Beauty” as his best work in terms of story structure and use of music. The ballet was received well by Shanghai audiences when it was performed at the SAIC Shanghai Culture Square in 2016.

According to Shanghai Culture Square Theater Management Co, the venue has reached another three-year deal with Bourne, so that more works by the British choreographer will be performed here on a more regular basis.

Bourne said he would like to bring “Red Shoes” to Shanghai next year. The ballet, set to the music of Bernard Herrmann, is broadly based on the 1948 film of the same name.

“It is a gorgeous, spectacular piece with beautiful designs,” said Bourne. “It will be revived in the UK next year, and we really hope to bring it to Shanghai.”