Liangzhu jade is on show in Palace Museum

The king’s yucong, a large jade cylinder with a hole in the middle, weighs 6.5 kilograms, and features motifs of deity and mythical creatures.

Liangzhu artifacts are on display in the Palace Museum in Beijing through October 20. The exhibition includes 300 pieces from museums across China.

Hangzhou’s Liangzhu ruins were inscribed onto the UNESCO World Heritage list during the 43rd session of the World Heritage Committee in Baku, Azerbaijan early this month.

Liangzhu State stretched over most of the Yangtze River Delta, with Liangzhu city located in Hangzhou’s Yuhang District.

The Neolithic civilization dates back as much as 5,000 years. As an early regional state with a unified belief system and a rice-based agriculture, Liangzhu was an urban civilization with complex functions and structures.

“The Palace Museum has its own Liangzhu collection and has been concerned with its excavation for a long time. The exhibition lasts from summer vacation to October, to allow more young people to visit,” said Shan Jixiang, former curator of the Palace Museum. 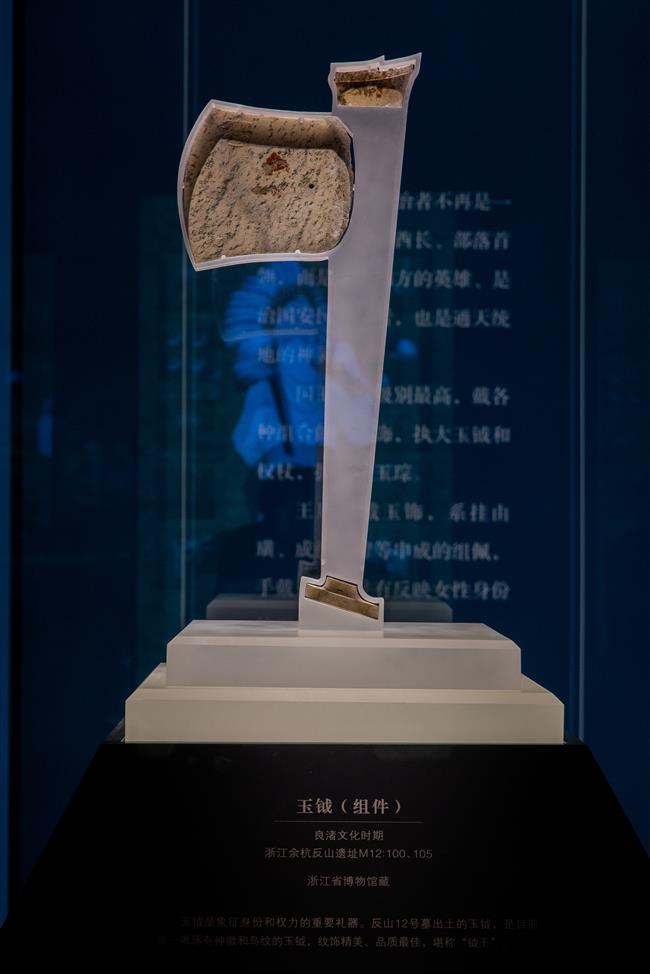 Jade accounts for the majority of the exhibition. Jade is the hallmark of Liangzhu, and its craftsmanship is considered the pinnacle of Neolithic jade skills in China.

Liangzhu State has been under archeological excavation for more than 80 years. Tombs and ritual relics have been unearthed with a large number of jade objects within. It had social classes, and the best articles were only unearthed in the burial sites of the elite.

Highlights of the exhibition are two jade articles discovered in the tomb of a Liangzhu king.

The king’s yucong, a large jade cylinder with a hole in the middle, weighing 6.5 kilograms, has deity and mythical creature motifs typical of agricultural civilizations. Its shape is believed to symbolize the cosmology of the ancient Liangzhu people.

The same motifs appear on jade and ivory articles, but are rarely engraved on pottery or stone burial objects. Different sizes of yucong have been found across the Yangtze River Delta, but those found in Liangzhu are the largest and best preserved. The lines are so fine and smooth that it is impossible to imagine how ancient artisans carved such delicate patterns with primitive stone tools.

In addition to the Liangzhu-period yucong, the exhibition also has counterparts from the Shang (16th-11th century BC) and Qing (1644-1911) dynasties, testifying to the influence of yucong in Chinese jade culture.

“Chinese people admire jade. This tradition can be traced to the Liangzhu period. The yucong created a precedent and developed related craftsmanship,” said Gao Menghe, curator of the exhibition.

The king’s yuyue is another jade article excavated from a king’s tomb, and it is also carved with the same mythical motif. In Liangzhu State, the king had absolute power. The yuyue was used as a scepter to summon armies and symbolized supreme military power.

In ancient China, kings and emperors believed the two most important aspects of a state were rituals and military affairs.

The discovery of yucong and in a Liangzhu king’s tomb reflects that the concept originated about 5,000 years ago.

All of the jade objects from the king’s tomb are on display in the exhibition. This is the first time a whole set of a Liangzhu king’s burial regalia has been assembled.

“Liangzhu people established the earliest ritual system, which had lasted through feudal regimes till the late 19th century,” said Gao.

“Now, the artifacts of China’s earliest civilized state are on display in the last imperial palace. It means a lot.”

Other highlights come from a Liangzhu queen’s tomb. When archeologists opened this tomb in 1987, they were stunned by the myriad of jade accessories. The largest one is made of 12 (jade circles) and a (half circle). They were placed on the body to accompany the dead into the after-world.

The queen was also buried with a necklace strung with small jade cylinders and a bracelet polished with a spiral pattern. These accessories look fashionable even today.

Date: Through October 20, closed on Mondays 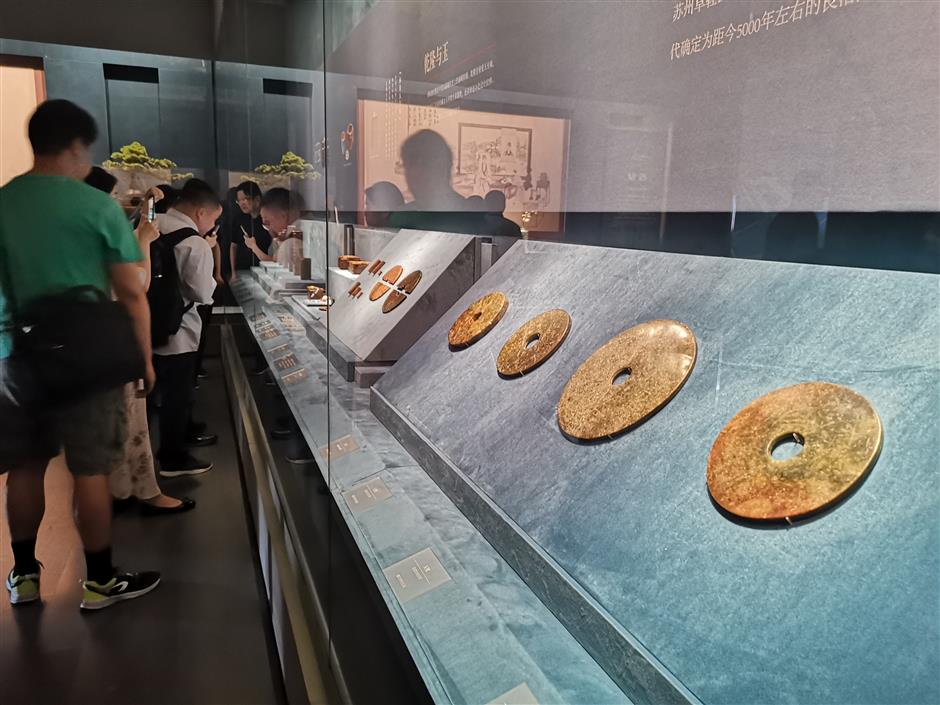 Visitors have a close look at treasures from Liangzhu ruins that are rarely showcased to the public.