'Impossible' Taoist temple hangs as a tribute to ancient builders 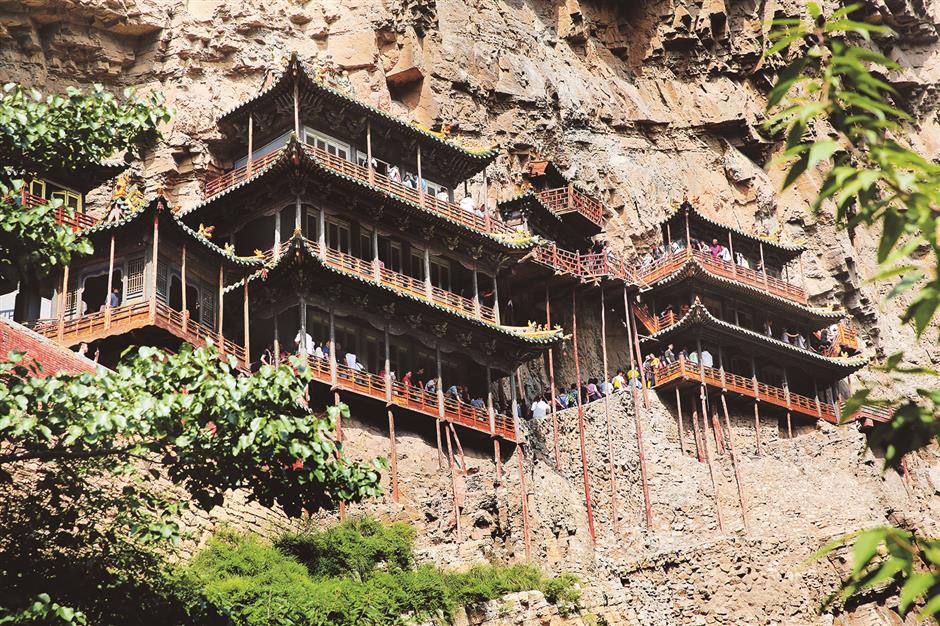 Xuankong Temple has been hanging, seemingly impossibly, on the steep cliffside of the mighty Hengshan Mountain in Shanxi Province, surviving landslides and earthquakes for the past 1,500 years.

Throughout China’s long history, its ancient architecture shines as a remarkable epitome of the country’s arts and culture, characterized by different regions, ethnic groups and times with their distinctive features in single buildings, complexes, gardens, temples or towers.

They spread across the nation, mostly built on flat ground, in the soothing arms of a river, at the foot of the hill or on gentle slopes.

However, there is one exception. Xuankong Temple is hanging, seemingly impossibly, on the steep cliffside of the mighty Hengshan Mountain in Shanxi Province. It has survived landslides and earthquakes for the past 1,500 years.

Held up by hemlock wood stilts slotted into holes chiseled out of the rock, the rest of the structure that supports the temple is hidden inside the bedrock. Seen from a distance, it looks like the building is inlaid into the huge limestone formed by ancient marine deposition, with a flooding river running underneath.

The distance between the top of the temple and the river valley is about 90 meters, equivalent to 30 stories or the height of the Statue of Liberty with the pedestal.

In the year 398, the North Wei Dynasty (AD 386-534) relocated its capital city to Pingcheng (today’s Datong in Shanxi Province). Under the influence of Taoism, a great number of Taoist temples were mushrooming in the city. The Taoist reformer and religious leader Kou Qianzhi (AD 365-448) wrote into his will in his last days that he wanted to build a temple in the middle of the air, which could “reach the heaven and leave the crowds below.”

About 40 years after Kou died, the wish finally came true. The builders chose a perfect place for the temple — in a valley of the Hengshan Mountain, protected by the Cuiping Peak in the west and the highest Tianfeng Peak with an altitude 2,016 meters in the east, traversed by the Tangyu River, creating a “fairyland” among waters and mountains, cut off from the mortal world.

Hidden inside the bedrock is the structure that helps to support Xuankong Temple.

But how did the workers “hang” the temple to the cliffside 1,500 years ago? The wise ancient Chinese had the solution.

They first carved out a platform on the cliffside taking advantage of the rugged rock and then slotted hemlock wooden stilts (all soaked in wood oil for hours to become damp-proof and anti-corrosive) into holes chiseled out from the rock. Each of the stilts, inserted into the bedrock, functioned as a hanger which could carry several tons in weight to support the main body of the structure.

In order to obtain more space, the builders carved deep into the mountain for grottoes. The three-story, two-tower temple has a total of 40 rooms, including worship halls, a drum tower, a bell tower and dormitories.

As the hanging temple is about 90 meters high above the ground, “it took great guts to climb,” traveler Xu Xiake (1587-1641) noted in his journal when he explored Hengshan Mountain in 1633.

The building is an architectural wonder that perfectly applied the principle of mechanics and the traditional Chinese wood-frame beam and column system, allowing it to survive two magnitude-6 earthquakes. The location also helped the temple stand firm and intact over the centuries.

Tucked into the natural groove of the rock, the temple is kept away from heavy rain, while its high position prevents any flooding. The two peaks on both sides are working as wind shelters, and the mountain blocks the sunlight that reduces the weathering of the wood usually used by exposure to too much sunlight.

The temple is also an example of religious harmony, where Buddhism, Taoism and Confucianism coexist. In the Chunyang Hall, Taoist Lu Dongbin is worshipped; the Leiyin Hall is for Buddhism; and Shakyamuni, philosophers Confucius and Laozi are enshrined in the Sanjiao Hall.